Copyright: © 2011 Young Ly S, et al. This is an open-access article distributed under the terms of the Creative Commons Attribution License, which permits unrestricted use, distribution, and reproduction in any medium, provided the original author and source are credited.

Trace lead is a dangerous environmental chemical that is associated with increased cancer risk. In this study, assay was conducted in ex-vivo mouse fluid, using a silver-doped microfilm electrode (SDE). The analytical working range was from 20 to 160 mg/L. Under optimum conditions, the micro range improved to 5-65μg/L while the detection limit was 5μg/L. Under a 10.0-mg/L Pb constant, the 10-time statistic was R 2 =9.795. This result was applied to mice ordure using SDE via cyclic and square-wave stripping voltammetry. As a result, 27.6μg/L Pd(II) was detected in the mice ordure solution with a precision value of ±12.5%. The techniques developed in this study using a probe that did not require pretreatment and expensive equipment can be applied in medical diagnosis.

Lead is an abundant and important but dangerous environmental chemical that is globally well-distributed [1]. It has been used since the ancient times, and some of its toxic effects were recognized as early as several centuries ago [1]. It exists in the natural agricultural grain, particularly in water [2,3], soil [4], animals and plants [7,8], and is also found in children’s toys. In addition, it is a versatile, subtle, and persistent poison [9]. Recent epidemiological data provide increasing evidence that environmental as well as occupational lead exposures may be associated with increased cancer risk [10]. Recent data also indicate the possibility of DNA synthesis stimulation caused by lead in human astrocytoma cells, through the mechanism that involves the activation of PKCα and mitogen-activated protein kinase [11]. It has likewise been reported that preschool children who have been exposed to lead obtain poor grades [12]. Due to lead’s toxicity, it is important to detect its presence and determine levels of such presence. Methods of detecting lead include electrothermal atomic-absorption spectrometry [13,14], X-ray fluorescence [15], anodic stripping voltammetry [16-18], and adsorptive stripping voltammetry [19]. However, spectro photometrics require complicated light separation and other detection techniques, while common type voltammetrics call for expensive reference and counter electrode. In this study, a silver-paste-coated microfilm electrode was used because it does not require pretreatment and expensive equipment. Moreover, electrodes are inexpensive and easy to make (they can be made manually in the laboratory). Compared to other techniques, use of electrodes is effective and economical. Results obtained a 5μg/L detection limit that was also improved for ex-vivo assay application.

Analytical systems were used with the bioelectronics-2 system, which was constructed at the authors’ institute. The second version involves a computerized handheld voltammetric instrument that is as big as a typical cellular phone. It can be used in the bioassay and sensor techniques for individual and laboratory applications. A standard lead solution (1,000 mg/L) was obtained from Merck. All the chemicals used were of analytical grade. The reference, counter, and working electrodes were used with SDE. The SDE was prepared by coating it with silver paste at the polyethylene microfilm (0.2 mm thick) surface with 3mm × 10 mm. A copper wire was subsequently connected to the electrical system. All the experiments were performed at room temperature without removing the oxygen. The electrolyte solution composed of 0.1M NH4H2PO4 with a pH of 3.6 was found to be the most suitable electrolyte solution. Using 0.1 M electrolyte solutions, Figure 1 shows the results for the stability of SDE. The counter and reference electrodes were examined under optimum conditions. 0.2 ml lead was spiked and tested 15 times. First, it obtained 1.161×10-4A and oscillated from 0.865 to 1.148×10-4A. Precision was 9.795 %, and analytical redox potential was examined. 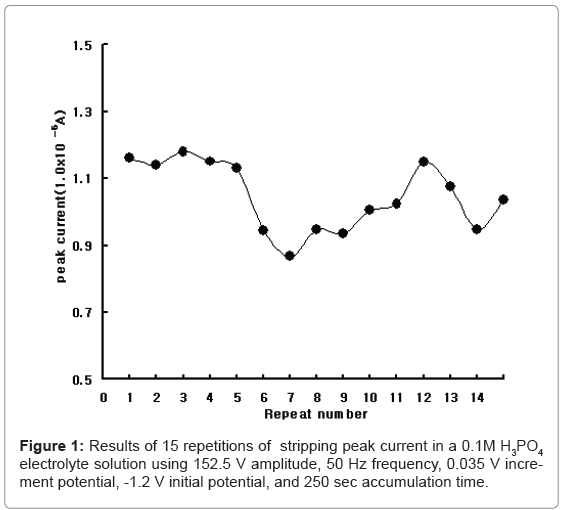 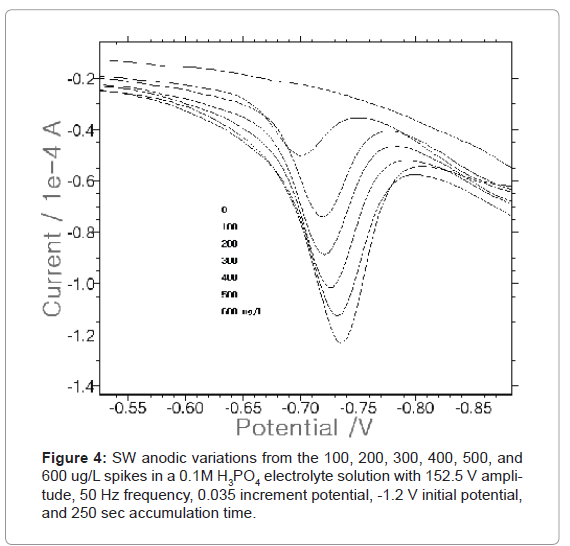 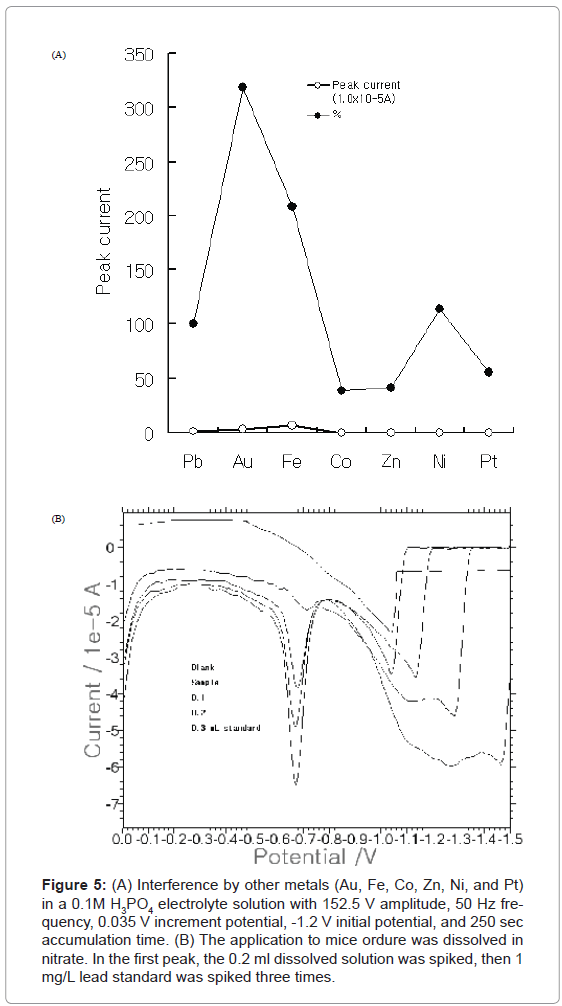 Figure 5:(A) Interference by other metals (Au, Fe, Co, Zn, Ni, and Pt) in a 0.1M H3PO4 electrolyte solution with 152.5 V amplitude, 50 Hz frequency, 0.035 V increment potential, -1.2 V initial potential, and 250 sec accumulation time. (B) The application to mice ordure was dissolved in nitrate. In the first peak, the 0.2 ml dissolved solution was spiked, then 1 mg/L lead standard was spiked three times.

After the working ranges were examined, the various analytical interference ions were also examined. Figure 5A shows the results of the interference by various metals under optimum conditions. Analog metals were added into the medium containing 0.1 mg/L lead for the tenfold spiking of 1 mg/L Au, Fe, Co, Zn, Ni, and Pt, respectively. This yielded results of 319, 209, 39.0, 41.6, 114, and 56.0%, respectively. The analytical interferences were effectively corrected using standard addition methods. Analytical application was then performed under optimum conditions. Figure 5B shows the stripping to the mice ordure. The standard addition method was used in this experiment. 0.1 g of mice ordure provided by the Cancer Center Hospital was put in the 1-mL-conc nitrate. It was dissolved in 100 mL distilled water. Initially, 0.2 ml dissolved solution was spiked. Afterwards, 1 mg/L lead standard was spiked three times. Here, the statistical analysis was performed three times, and the average concentration was 27.6±0.0346 μg/L. Results show that the developed methods can be applied to ex-vivo detection.

Three-SDE microfilm cell systems are inexpensive, and easy and fast to make. In this study, the optimum conditions of 152.5 V amplitude, 50 Hz frequency, 0.035 increment potential, -1.2 V initial potential, and 250 sec accumulation time were obtained. The detection limit was 5 μg/L. These optimized conditions were applied to the detection of lead in mice ordure. After the experiment, trace lead was found to remain in the mice ordure. Therefore, it can be used to detect lead in other fields, such as in in-vivo or ex-vivo fluid, tissue, and biological assay.