For fattening three different salinities were tried (20, 25 and 30 ppt). The weight gain of the crabs cultured in 30 ppt was (58.0 g) significantly higher than 20 (46.7 g) and 25 (50.4 g) ppt. The shell was becoming harder in shorter duration (10.6 days) when the water crabs were cultured in 30 ppt rather than other salinities (20 and 25 ppt). Hence 30 ppt was selected as optimum salinity for the culture of water crabs as evidenced by higher weight gain and shorter duration for shell hardening.The water crabs offered with trash fish showed a significantly higher weight gain (50.40 g). The crabs were hardened significantly in very shorter duration when they were fed with trash fish (14 days). However, the animals were taking longer duration when fed with clam (17.6 days) and oyster (16.6 days). The survival of the crabs was 100% irrespective of the feeds used. So trash feed is recommended as a best feed for fattening of C. natator.

In Indian scenario, the consumers mostly prefer bigger crabs viz., S. serrata and S.tranquebarica. But as far as Parangipettai coast is concerned the availability of these bigger crabs are restricted only in summer seasons [1-3]. In recent times the small and medium sized crabs are processed and finally sold as a processed food [4]. So the demand for these crabs is increasing day-by-day. Although resources are available for crab fattening from Nagappattinam to Cuddalore coastal areas of Tamil Nadu [2,3]. But farmers are not concerned about crab fattening due to lack of awareness and proper technology. The fattening of crabs may be economically viable and it will give additional income for the fisherman. It provides alternative sources of income especially during fishing holidays imposed somewhere in April-May and also create employment opportunities for the unemployed youth. To create awareness among the farmers and fisher folk, fattening experiment was tried in the crab C. natator.

The water crabs of C. natator were collected from the Parangipettai landing center and the size ranged from 61-65 g. Healthy, live, disease free water crabs were selected and checked for any loss of appendages. They were brought to the laboratory by using bucket. When reached to the laboratory they were acclimatized to laboratory conditions (Temperature 26-31°C; pH 7.5-8.2; dissolved oxygen 5 ppm).

Before entering into the actual fattening experiment, the animals were exposed to different salinities to know the optimum salinity. For this experiment 100 litre fibre glass tanks (Plate 1) were selected and introduced the animal in each salinity. The experimental salinities were ranging from 25-35 ppt . The experimental crabs were fed with trash fed at 10% of their body weight. Feeding was done twice in a day in the morning (6.00 am) and evening (6.00 pm). Weekly sampling was done to assess the healthy condition and weight gain of crabs. Fifty percent of the water was changed regularly in the morning and replaced with respective salinities. The crabs were harvested once the shell becomes hard [5]. The environmental parameters viz., salinity, dissolved oxygen, pH and temperature were regularly checked by using refrectometer (Erma), Do meter (Deepvision Model 811E), pH meter (Eutech) and thermometer, respectively. After knowing the optimum environmental conditions for fattening they were stocked in tanks and exposed to optimum environmental parameters (salinity 30 ppt; temperature 26-31°C; pH 7.5-8.2 and dissolved oxygen 5ppm). The experimental crabs were fed with locally available low cost feed. The animals were offered with three different live feeds (clam meat, oyster meat and trash fish) (Plate 2). Clam meat and trash were purchased from the fisher folk. Oyster meat was collected from Vellar estuary. The crabs were fed at the rate of 10% of their body weight daily at dawn and dush. 40% of daily ration were given during morning and remaining 60% during the evening. Proximate analysis of feeds was determined. The protein, carbohydrates, lipid moisture and ash were estimated as earlier. The gross energy of the feed was calculated from the biochemical constituents by using the conversion factors i.e., 4.18 kcal/g of carbohydrate, 9.46 kcal/g for lipid and 4.32 kcal/g for protein [6].

Sampling of crabs was done once in two days to ascertain the healthy condition, weight gain and hardening of the crabs. 50% of the water was changed regularly in the morning and unconsumed feed settle at the bottom was removed while water exchange. The crabs were harvested once the shell becomes hard [5].

To know the statistical significance the data were treated with one way analysis of variance. Differences in treatment means were determined by Duncan’s multiple range test (P<0.05) using SPSS/PC + package version 17.0.

The results of salinity experiment are presented in (Table 1 and Figure 1). For fattening three different salinities were tried (20, 25 and 30 ppt). The weight gain of the crabs cultured in 30 ppt was (58.0 g) significantly higher than 20 (46.7 g) and 25 (50.4 g) ppt. The shell was becoming harder in shorter duration (10.6 days) when the water crabs were cultured in 30 ppt rather than other salinities (20 and 25 ppt). The survival of crabs was 100% irrespective of the salinities. From the result 30 ppt was selected as optimum salinity for the culture of water crabs as evidenced by higher weight gain and shorter duration for shell hardening. 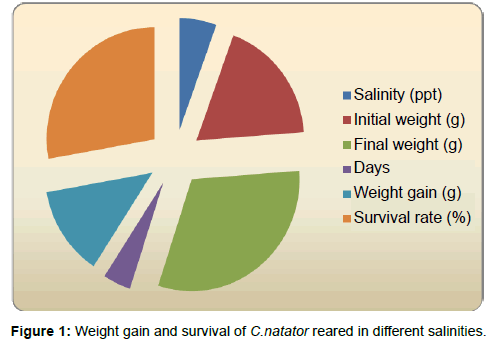 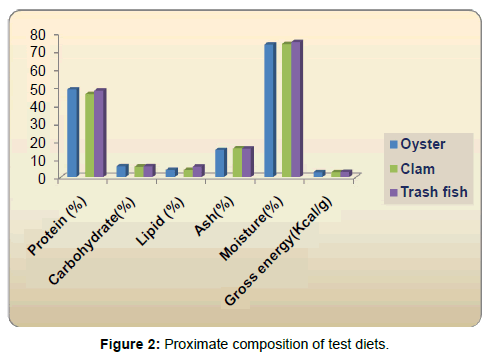 Fattening experiment: The results of water crabs cultured in different feeds are displayed in (Table 3 and Figure 3). 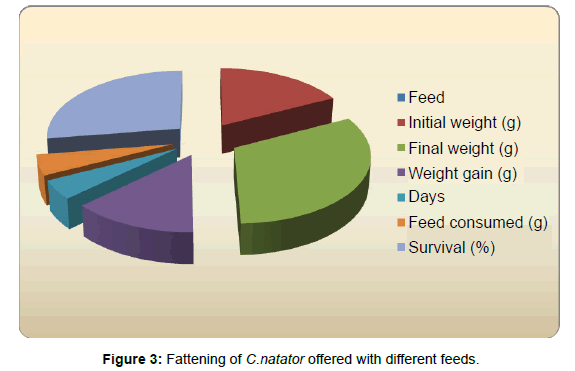 Duration: The crabs were hardened significantly in very short duration when they were fed with trash fish (14 days). However, the animals were taken long duration when fed with clam (17.6 days) and oyster (16.6 days). The duration of the clam and oyster fed animals did not show significant difference.

Survival: The survival of the crabs was 100% irrespective of the feeds used.

Salinity is important parameters to control the growth and survival of the crabs. Each and every aquatic organism requires particular salinity for normal growth and survival. If it is exposed higher and lower from the optimum will affect growth and survival. In higher and lower salinities, the animals are under stress so it delays the deposition of calcium on the exoskeleton. In the present study the water crabs were taking more time for hardening of the exoskeleton when kept in 20 and 25 pp salinities. Whereas it was shorter when the crabs were exposed to 30 ppt. Soundarapandian et al. [5] conducted similar experiment for S. tranquebarica. They confirm that 25 ppt were optimum salinity for S.tranquebarica. Even though they have exposed the crabs with 20 and 30 ppt.

In most of the studies in crustaceans, weight gain was mainly dependent on the nutritional quality of feeds [7]. Hence the weight gain was assumed to be improved by offering high quality feeds to the water crabs. The average weight gain of C. natator noticed in the present study was directly related to the levels of protein in the diet. Variations in weight gain were found to be associated with differences in chemical composition of diets. Water crabs are known to mobilize greater amount of protein for energy metabolism. Consequently the protein requirement in the water crabs might be high. The dietary protein content in the present study was 48.71% in oyster, 46.08% in clam and 48. 05% in trash fish. The weight gain of water crabs fed with oyster and clam meat did not differ significantly. The water crabs fed with trash fish showed the highest weight gain. Similar result was reported when the trash fish offered with P. pelagicus [5]. Kanazawa et al. [8] reported that the fresh diets of short neck calm (Tapes philippinaruum) gave superior growth compared to the compounded diet for P. japonicus. Similar results were obtained from Forster [9]. Frequent moulting was observed during feeding with fresh clam meat [10]. One major nutritional difference between live food organisms and compound feed is the presence of digestive enzymes in the live food organisms. These enzymes of dietary origin play important role in promoting the digestion and growth of crustacean [11].

Feed consumption is not always related to weight gain. In the present study C. natator consumed more or less same amounts of oyster, clam and trash fish individually. But weight gain was more when trash fish feed animals than other feeds. Similar result was already reported by Soundarapandian et al. [12] in P. sanguinolentus. Senthilkumar [13] used three types of live feeds viz., clam meat, fish meat and beef meat for the water crabs of S. serrata. Growth, survival and production rate was maximized when the water crabs were fed with combined feeds rather than fed individually. Williams [14] also suggested that the mixed diets support superior growth. No significant change was observed in the total weight of S. serrata fed with trash fish, slaughter house waste and clam meat during fattening [15]. The survival was 100% irrespective of the feeds used in the present study. The environmental conditions used in the present study were optimum (Salinity 30 ppt; Temperature 26–31°C; pH 7.5–8.2; Dissolved oxygen 5ppm) and the water crabs used in the present study was mostly the same size (61–65 g) with the same degree of shell hardness were stocked to reduce cannibalism and facilitate easy harvest. This may be one of the reasons for higher survival in the present study.