Gender Differences in the Relationship between Alcohol Use and Depressive Symptoms in St. Petersburg, Russia

Copyright: © 2012 Zhan W, et al. This is an open-access article distributed under the terms of the Creative Commons Attribution License, which permits unrestricted use, distribution, and reproduction in any medium, provided the original author and source are credited.

Studies outside Russia have demonstrated that the association between alcohol problems and depression is well established [1-5]. Several possible explanations for this relationship have been proposed [2,6,7]. First, both alcohol problems and depression might share common environmental or genetic causes [8]. Second, alcohol problems may affect the development of depression through metabolic changes (e.g., alcohol problems reduce folate metabolism, which is linked to an increased risk of depression) or through the negative effects that alcoholism has on a drinker’s social, economic and legal circumstances (e.g., partner-relationship disruptions) [2,9]. Third, because people with depression are more likely to drink alcohol to cope with negative feelings , depression might lead to alcohol problems [10]. Finally, although there appear to be more studies that support an alcoholism to depression pathway [2], there is also evidence that this association may be bidirectional; that is, both disorders simultaneously increase the risk of the other [11].

Four hundred seventy patients who visited a public clinic for sexually transmitted infections (STIs) in St. Petersburg, Russia were screened for participation in a behavior intervention study. The institutional review boards of the Biomedical Center in St. Petersburg, Russia and Yale University in Connecticut, United States approved this study. An invitation was extended to the 338 adults who met the inclusion criteria of having multiple sexual partners or at least one casual partner three months prior to the interview. These potential participants were informed of the purpose of the study and were assured that the study was confidential and voluntary. Thirty-one patients refused to participate. Three hundred seven patients provided written informed consent and completed a baseline assessment between July 2009 and November 2010. We used the baseline data before intervention for the present analysis.

A self-administered questionnaire collected data on demographics, alcohol use, drug use, sexual risk behaviors, and psychological factors. The demographics consisted of age, sex, marital status, education level, employment status, and monthly income. The Alcohol Use Disorders Identification Test (AUDIT) which includes 10 questions with a total score that ranges from 0 to 40 was used to measure alcohol use [24]. A score of 8 or higher is usually indicative of hazardous drinking [24]. The Cronbach’s α for the AUDIT is 0.85 in the current sample.

The ten-item Center for Epidemiological Studies Depression Scale (CES-D-10), which is a shorter version of the 20-item CES-D that is widely used to screen for depression [25,26], identified depressive symptoms. Each item on the CES-D-10 has 4-point response options that range from 0 to 3. Thus, the total CES-D-10 score ranges from 0 to 30. A score of 10 or more is usually used as the cut-off value for depressive symptoms. The CES-D-10 has demonstrated good predictive accuracy when screening for depression in comparison to its full version [25]. The Cronbach’s α for the CES-D-10 is 0.84 in the current sample.

Chi-square tests were used to examine whether the characteristics differed by gender. Fisher’s exact test was used to compare these variables when the Chi-square test was inappropriate (i.e., in cases of small expected frequencies). A graph was plotted to preliminarily examine the effect of alcohol use on depressive symptoms by dividing the AUDIT score into quartiles and calculating the prevalence of depressive symptoms at each quartile. The quartiles were separately calculated for men and women because men and women might have different drinking patterns. The Mantel-Haenszel Chi-square test was used to preliminarily examine whether there was a linear relationship between the quartiles of alcohol use and depressive symptoms.

Multivariate logistic regression was used to examine the relationship between alcohol use and depressive symptoms. Higher order terms of continuous AUDIT scores and interaction terms between AUDIT scores and gender on depressive symptoms were included in the models to test whether there was a U-shaped relationship and whether the relationship differed by gender. If a significant interaction effect was observed, separate multivariate logistic regressions were used to determine whether alcohol use was associated with depressive symptoms for men and women. For the purpose of interpretation of the study results, AUDIT quartiles were used in the final model when a U-shaped relationship was observed, and dichotomized AUDIT (alcohol misuse vs. non-misuse) was used when a linear relationship was observed. The significance level was set at p < 0.05 and the data were analyzed using SAS 9.1 (SAS Institute Inc., Cary, NC).

Of the 307 participants, 220 were men and 87 were women (Table 1). Men were less likely to be married and to have monthly income < 15,000 rubles (about 530 US dollars) in comparison to women. No significant gender differences were observed for age, education, employment status, history of STIs, ever being a commercial sex worker, and intravenous drug use. 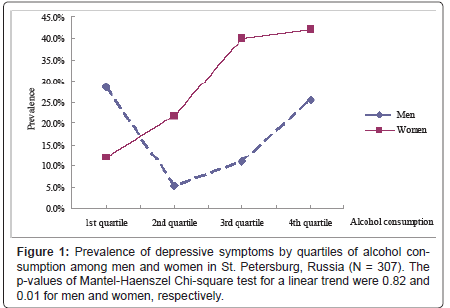 Figure 1: Prevalence of depressive symptoms by quartiles of alcohol consumption among men and women in St. Petersburg, Russia (N = 307). The p-values of Mantel-Haenszel Chi-square test for a linear trend were 0.82 and 0.01 for men and women, respectively.

To facilitate the interpretation of the results, we replaced the continuous AUDIT score with quartile levels of AUDIT score (Table 2). The model revealed that men in the 1st and 4th alcohol use quartiles were more likely to have depressive symptoms in comparison to those in the 2nd quartile (odds ratio [OR; and 95% CIs] for the 1st quartile: 7.54 [2.00-28.51]; for the 4th quartile: 5.06 [1.31-19.63]) after controlling for significant covariates, such as employment status, as well as history of STIs and intravenous drug use. There were no significant differences between the 2nd and 3rd alcohol use quartiles.

Given the linear trend between continuous AUDIT score and depressive symptoms among women, a multivariate analysis directly investigated this relationship using alcohol misuse in place of continuous AUDIT score in order to obtain more intuitive results. In the multivariate analysis, women who misused alcohol were 3.03 times more likely to have depressive symptoms in comparison to those who did not misuse alcohol (95% CI = 1.05-8.80) after controlling for the number of sexual partners these women had in the past three months (a significant covariate).

The present study found a significant association between alcohol use and depressive symptoms, and this association differed by gender. Specifically, a non-linear, U-shaped relationship was present among men, whereas a linear trend was observed among women. To the best of our knowledge, this study is the first to specifically examine the existence of a non-linear relationship and gender differences between alcohol use and depressive symptoms in Russia.

The U-shaped relationship that was observed in the present study suggests that men who had higher AUDIT scores were associated with fewer depressive symptoms up to a point; above this threshold, men who had higher AUDIT scores were associated with more depressive symptoms. Although this U-shaped relationship has also been observed in previous studies, the mechanisms remain unclear [7,17,27-29]. The two sides of the curve might have different underlying mechanisms [29]. First, it is possible that alcohol misuse may lead to depressive symptoms on the right side of the curve (moderate to heavy drinking), whereas alcohol use might have a protective effect on the left side of the curve (light to moderate drinking) [28]. Second, it is possible that depressive symptoms might lead to either abstinence or the heavy use of alcohol [7]. For example, some people with depressive symptoms might cope with these symptoms with heavy alcohol use, whereas others might activate a self-evaluation process that motivates them to reduce their alcohol use [2,30]. It is also possible that people who use alcohol at both ends of the curve might share common risk factors for depression (e.g., unemployment and social isolation). For example, unemployment might cause either heavy drinking due to increased stress or abstinence due to financial hardship [31,32]. Although we controlled for important potential confounders in the association between alcohol use and depressive symptoms, we missed others, such as economic or employment related stresses among those who were employed [33-35]. Future studies might need to elucidate the potential mechanisms that may affect the association between alcohol and depression.

aSTI: sexually transmitted infection
bCommercial sex worker and injection drug use were not included in the estimation among women due to small numbers.
cAlcohol use was categorized by using the Alcohol Use Disorders Identification Test (AUDIT). Since a significant linear trend was observed for women, we presented alcohol use as alcohol misuse vs. non-misuse for women (a score ≥ 8 indicates alcohol misuse).

Table 2: Odds ratios (ORs) and 95 percent confidence intervals between alcohol use and depressive symptoms among men and women in St. Petersburg, Russia (N = 307) .

The results from the present study should be interpreted in the context of several limitations. First, although the CES-D-10 scale is widely used to screen for depression, it is not a clinical evaluation. Furthermore, although the CES-D has been used and validated in many countries, including Russia [36,37], the validity of the CES-D-10 has not been examined in Russia. Second, the participants (STI patients) were highly selective; thus, these findings should not be generalized to other populations such as non-clinic samples. Third, the different patterns of alcohol use and depression in the men and women might simply be due to different motivations for alcohol use. For example, it is possible that the more women self-medicate with alcohol the more depressed they become, thus generating a linear positive slope [38]. Men’s depression on the other hand might be situationally brought on by the drinking. For example, in Russia, teetotalers might be depressed because they feel excluded from men’s peer groups [39]; those who are excessive drinkers may be unable to function in the economy and family life – making them depressed [32,34]. We did not collect drinking motivation in the present study and thus we could not exclude these possibilities.

In summary, the present study demonstrated a non-linear U-shaped relationship between alcohol use and depressive symptoms among men and a linear trend among women. Additional research is needed to investigate relationships among alcohol use, depressive symptoms, gender differences, and other alcohol related risk factors in Russia. Preventive strategies for reduction of alcohol-related problems in Russia should consider these differences.

This work was funded by Grant Number R01AA017389 from the National Institute on Alcohol Abuse and Alcoholism (PI: N. Abdala).