Copyright: © 2013 Bostani A, et al. This is an open-access article distributed under the terms of the Creative Commons Attribution License, which permits unrestricted use, distribution, and reproduction in any medium, provided the original author and source are credited.

Background: Buprenorphine is a partial mu-opioid receptor agonist that is an effective agent for agonist therapy for opioid addiction and for the management of withdrawal from heroin and other opioids.

Conclusion: We concluded that headache is an important compliant during treatment of opiate addiction with buprenorphine and is not just a symptom of opiate withdrawal.

Opiate dependence is a major health and social issue in many countries, as it is associated with increased morbidity and mortality. It adversely affects social circumstances and is accompanied by lost productivity and higher healthcare and law enforcement costs [1]. As reviewed before substitution treatment with opioid agonists such as methadone (Meth) is one of the major treatment options for patients, with proven efficacy in reducing opioid consumption and criminal behaviour, lowering rates of HIV/HBV infection and increasing retention rate and social functioning [2,3].

Buprenorphine is a partial μ-opioid receptor agonist that is an effective agent for agonist therapy for opioid addiction and for the management of withdrawal from heroin and other opioids [4]. Clients in opioid substitution therapy often have considerable unmet healthcare needs [5]. Improvement in detection and response to common health problems related to opioid substitution therapy can improve the effectiveness of agonist treatment of patients [6].

All patients that admitted for opiate detoxification or maintenance therapy with buprenorphine in one of main private centers of addiction treatment in Kermanshah in west of Iran from January 2010 to December 2010, enrolled in this study. According to Iranian guideline for agonist prescription, candidates must meet following criteria;

• Diagnosis of opioid dependence based on DSM IV criteria

• At least one positive urine sampling test for morphine derivates

• Willingness to give informed consent and comply with treatment protocol

A structured interview was used to assess addiction profile and patient’s demographic at the admission. After initial assessment by staff and completing first interview, a medical practitioner trained and accredited in agonist prescription, independently verified eligibility and enrolled the patients in the treatment.

Induction doses across all sites were set at flexible doses, in line with Iranian policy. During this period, physician can change the dose which was implemented in accordance with standardized policy across the sites, based on withdrawal signs or toxicity/sedation being present. In buprenorphine detoxification program physician advises clients not to use any opioid at least in 24 hours before prescribing buprenorphine. Then buprenorphine was prescribed in withdrawal status after sufficient abstinence. After maximum dose in second day, drug was tapered during maximum 3 weeks according to patients’ signs and symptoms.

The staff of this outpatient agonist therapy completed a questionnaire every day to assess dosage and withdrawal symptoms for the past 24 hours. Using the short opiate withdrawal scale (SOWS) [12], patients were required to rate their experience of 10 symptoms of withdrawal on a scale ranging from 0 to 3 (0 denoting ‘none’ and 3 ‘severe’). The maximum score that could be achieved on this scale was 30, which would represent severe withdrawal, the minimum 0. Headache pain intensity over the past 24 h was scored by the participant on an 11-point numerical rating scale (0 no pain, 10 the worst), which has been described as a valid, reliable and responsive instrument to measure pain. Withdrawal scale and headache intensity was assessed from the day before abstinence to 21st day after beginning of treatment. Patients were asked about history of previous chronic headache and their headache diagnosis and management.

Variables including demographic measures such as age, daily headache score measurements on a scale of 0 to 10 are reported as means with standard errors (SE). If there were missing data points on the diaries, the average of the days that were provided was used for analysis. Overall, the data completion by participants was excellent. Subjects with headache were divided into 2 groups (severe vs. mild) based on median of headache score. Incidence of severe headache was assessed in different days of treatment and different groups using chi-square test. History of chronic headache, withdrawal severity and dose of buprenorphine in those reporting greater severity of headaches during the treatment compared to those who reported less severe headaches. Mean of headache scores compared in days before abstinence, abstinence, high dose buprenorphine and low dose buprenorphine using Kruskal-Wallis test. All statistical tests were considered significant at the 0.05 probability level. 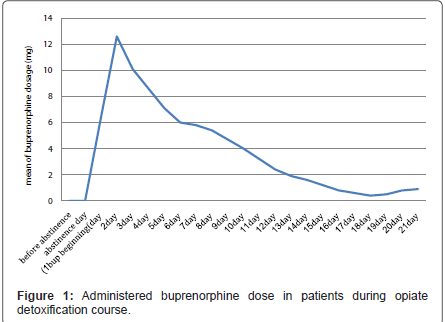 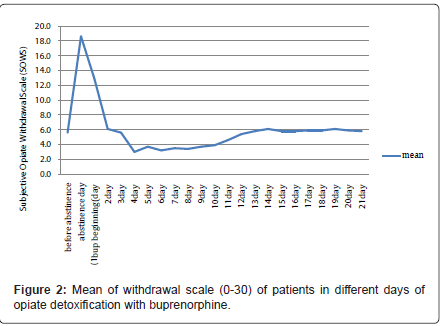 Figure 2: Mean of withdrawal scale (0-30) of patients in different days of opiate detoxification with buprenorphine.

Table 2: Incidence of severe headache (Visual analogue score of more than 3) in different outcomes of patients.

239 patients (63.1%) experienced headache during assessment and we divided these headaches into two groups based on their median of score of pain intensity (scores 1-3 as mild and scores ≥ 4 as severe). Fifty three percent of headache patients (127 persons) experienced severe pain at least in one day in this period. Among these patients 103 patients (81.1%) reported a positive history of chronic headache. Positive history of chronic headache in other headache patients was 17.8% (20 patients) (p<0.05).

Among individuals leaving residential detoxification, chronic pain is a common problem and is associated independently with longterm substance use after detoxification. Addressing pain as a treatable chronic condition among adults receiving detoxification presents a potential opportunity to improve long-term clinical outcomes and warrants further intervention research [6,13].

Headache was found as a common compliant in this study. Similar finding has indicated in other studies about effectiveness of buprenorphine in management of opioid dependency [2,7,8,14-16]. Withdrawal symptoms such as headache may be difficult to distinguish from side-effects or toxic effects in opioid dependence. Results related to such symptoms must be discussed with caution since there is a high inter-correlation between these groups of symptoms, both of which basically rely on subjective responses. Addicted patients may overestimate their pains due to their drug seeking behavior and going out of treatment program. Patients who don’t like to remain on abstinence often exaggerate withdrawal symptoms and drop out. We didn’t find relation between headache prevalence and drop out frequency. This subjective symptom is a real feeling and not just a misleading report of clients.

Buprenorphine is placed in list of drugs with headache side effect [9]. But mechanism of this headache was not established very well. Opioid therapy can induce opioid hyperalgesia that may cause heightened pain sensitivity and may aggravate preexisting pain [17,18]. Opioids can cause medication overuse headache (MOH) in which headaches becomes more frequent with repeated use of some drugs [19]. According to our results history of chronic headache was more in patients that experienced severe headache during detoxification with buprenorphine. As indicated before, patients with chronic pain and MOH are at risk to be opium addict [20]. Their headaches had been diminished during daily use of opiate and reappeared during detoxification. Both MOH and OIH (opioid induced hyperalgesia) can explain this exacerbated headache with opioid agonists detoxification.

Although many of the non-withdrawal-accompanied headaches experienced by subjects would likely be classified as migraines but according to our assessment questionnaire as a general headache assessment tool the differentiation between the types of headache is difficult. No attempt to differentiate the migraine headache from the non-migraine headache patients was made by the subjects or study personnel. Among the primary headaches, migraine is the most important cause because of a 10% prevalence combined with severe intensity. Williamson et al. demonstrated that opioids have potent inhibitory actions within the trigeminal system acting both peripherally, to inhibit neurogenic dural vasodilation and centrally to inhibit brainstem neuronal activity in response to stimulation of the dural and meningeal vasodilation [21]. Opioids interact with three receptor types termed m, d and k, although it is now thought that there may be further subtypes of these receptors. Morphine and other opioid analgesics such as pethidine, are sometimes used in the clinic to treat severe cases of migraine headache, particularly when other agents are ineffective or contraindicated, such as during pregnancy or in patients with coronary heart disease [22]. Although these agents are preferential μ-opioid receptor agonists, it is reported that a nasal spray formulation of the mixed κ-opioid agonist/μ-opioid antagonist butorphanol is also a safe and effective treatment for acute migraine attacks [23]. A similar effect for buprenorphine (mu-receptor agonist and kappa-receptor antagonist) was not reported before.