High Frequency of CYP3A4*1B among Opiate Dependent Patients in Malaysia

Copyright: © 2012 Mohamad N, et al. This is an open-access article distributed under the terms of the Creative Commons Attribution License, which permits unrestricted use, distribution, and reproduction in any medium, provided the original author and source are credited.

The sharing of injection needles among drug user is a leading cause for the spread of HIV/AIDS. Malaysia introduced methadone as a management of heroin dependents to reduce HIV spread. Methadone has variable pharmacokinetics and CYP3A4 has been implicated in its metabolism. The objective of this study therefore was to determine if polymorphisms exist with CYP3A4 among opiate users in Malaysia. This study was approved by Ethics Committees at University of Malaya and Universiti Sains Malaysia. Control subjects comprised blood donors, students and residents of a village. Opiate-dependents were from methadone clinics and drop-in centers. They signed a written-informed consent to participate and gave blood for DNA CYP3A4 genotyping. DNA was extracted using QIAgen DNA mini kit. A nested two-step allele specific PCR method was developed to detect CYP3A4*1B, CYP3A4*3, CYP3A4*4, CYP3A4*5, CYP3A4*6, CYP3A4*7, CYP3A4*8, CYP3A4*9, CYP3A4*10, CYP3A4*11, CYP3A4*12, CYP3A4*13, CYP3A4*14, CYP3A4*15 and CYP3A4*16. Normal controls comprised Malays, Chinese and Indians but opiate-dependent subjects were majority Malay males. Control subjects all carried the wild-type gene. Mutant CYP3A4*1B allele was found in 2.17% of opiate-dependent subjects. Our results revealed that CYP3A4 was not polymorphic among Malaysian Malays, Chinese and Indians who were not opiate-dependent. To date, we are not aware of any study to associate CYP3A4 polymorphism and heroin addiction. It is conceivable that altered CYP3A4 function may contribute towards addiction liabilities in subsets of individuals. We conclude that CYP3A4 is polymorphic among heroin-dependent individuals. The mutation, CYP3A4*1B is not silent. This may have implications on heroin addiction liability as well as on dose requirements for MMT and HAART.

Heroin use and the sharing of injection needles among drug users is a leading cause for the spread of HIV/AIDS in Malaysia and several other South East Asian countries. In 2006, Malaysia introduced methadone as a management of heroin dependents in an effort to break the viscous cycles of heroin addiction and HIV/AIDS. Methadone is taken orally and it prevents withdrawal and reduces illicit drug use. It is a vital public health strategy for HIV/AIDS risk reduction [1]. Variability in methadone clearance, susceptibility to drug interactions, and a long elimination half-life can however be major impediments to optimal methadone use [2,3]. In in vitro drug metabolism studies, CYP3A4 has been implicated in methadone metabolism [4]. Authors have suggested dosing guidelines for methadone and warned about the potential for CYP3A4-mediated interactions and suggested the need to adjust doses accordingly [2,3,5-11].

CYP3A4 is the most abundant CYPs in human. Substrates of CYP3A4 include methadone, anti-depressants, immunosuppressive agents, macrolide antibiotics, benzodiazepines, calcium channel blockers [12], and several antiretroviral [4,13,14] used in HIV/AIDS. Also importantly, CYP3A4 is involved in the metabolism of endogenous substances that include testosterone [15], progesterone [16], cortisol [17], and 17β-estradiol [18], and this may be important in the patho physiology of diseases including drug dependence. CYP3A4 exhibits genetic polymorphism and as with other polymorphic enzymes, the identification of molecular variants in the CYP3A4 gene is a major focus of pharmaco genetic studies.

Malaysia is a multiethnic country where genetic polymorphisms of several drug metabolizing enzymes have been previously described [19-26]. Although our earlier studies failed to detect polymorphism at the CY3A4 locus, mutant alleles have recently been described in Malaysia [27]. The objective of this study therefore was to determine if polymorphisms exist with CYP3A4 among opiate users in Malaysia given its role in endogenous metabolism and in the metabolism of methadone.

The protocols for this study received the approval of the Ethics Committees at the University of Malaya in Kuala Lumpur and Universiti Sains Malaysia in Kelantan. For the normal controls, subjects comprised blood donors at Universiti Malaysia Medical Centre, Universiti Sains Malaysia Hospital, students at the two universities and residents of a Malaysian Indian community in Kuala Krai, Kelantan. For opiate-dependent individuals, subjects were enrolled from several methadone clinics and drop-in centres for drug users in Kuala Lumpur and in Kota Bharu, Kelantan. They were given an explanation about the study and were invited to participate if they were willing to sign a writteninformed consent. They were administered standard questionnaires to obtain demographic data and to establish opiate dependence. Five milliliter of blood was then obtained from them for DNA extraction and CYP3A4 genotyping.

Isolation of DNA and PCR genotyping

Genomic DNA was extracted from subjects’ blood by using QIAgen DNA mini kit (QIAGEN, Hilden) according to the protocols recommended by the manufacturer. The quantity and quality of the extracted DNA was determined on the spectrophotometer with measurements done at 260 and 280 nm.

Subsequent to successful first PCR, the products were subjected to two parallel allele-specific second PCR, one with wild-type specific primers and the other with mutation-specific primers, were carried out in separate PCR reactions. In this second PCR, five set of reaction mixtures and cycle condition were required to detect all the alleles as listed in Table 2 and Table 3. The predicted PCR products as listed in Table 4 were analyzed on 2.5 % agarose gel in 1X TBE buffer run at 90 V for 75 min.

Table 3: Final concentration of each primers used for each Set in allele-specific second PCR. 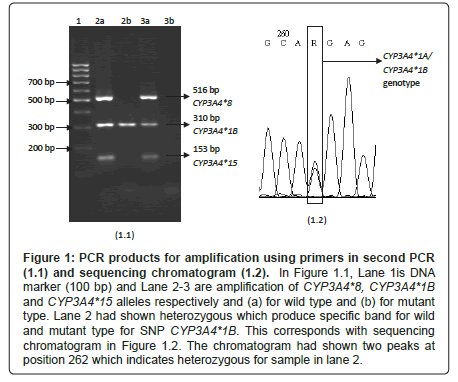 Figure 1: PCR products for amplification using primers in second PCR (1.1) and sequencing chromatogram (1.2). In Figure 1.1, Lane 1is DNA marker (100 bp) and Lane 2-3 are amplification of CYP3A4*8, CYP3A4*1B and CYP3A4*15 alleles respectively and (a) for wild type and (b) for mutant type. Lane 2 had shown heterozygous which produce specific band for wild and mutant type for SNP CYP3A4*1B. This corresponds with sequencing chromatogram in Figure 1.2. The chromatogram had shown two peaks at position 262 which indicates heterozygous for sample in lane 2.

Figure 1.1 shows a gel picture from a successful Set 1 for second PCR for two representative samples from two different subjects. CYP3A4*1B was detected in five subjects who carried heterozygous CYP3A4*1A/CYP3A4*1B genotype. The remaining subjects did not carry any mutant allele. The heterozygous subjects then were validated using DNA sequencing and the chromatogram is shown in Figure 1.2. Double peaks was produced at position 262 which indicates the presence of heterozygous CYP3A4*1A/CYP3A4*1B genotype.

Table 4: Primer combinations for amplification of first and allele-specific second PCR of CYP3A4.

Table 5: Genotype frequency according to Hardy-Weinberg equilibrium in opiatedependent patients.

Malaysia is facing a double challenge of illicit drug use and a rapid spread of HIV/AIDS. As a “harm-reducing” measure, the Malaysian Government introduced Methadone Maintenance Therapy (MMT) for heroin users in Malaysia. In our previous study in 52 Malay male subjects given a single 8 mg dose of methadone, we found a wide variability in its clearance, consistent with other studies previously reported [28]. The variability in our 52 subjects could not be explained by polymorphisms at the CYP2D6 locus, a very polymorphic gene in our population [19-21], another enzyme implicated in methadone metabolism [29]. This led us to investigate the genetic polymorphism at the CYP3A4 locus among heroin drug users. Apart from being involved in the metabolism of methadone, CYP3A4 is also involved in the metabolism of several anti-retrovirals used in the treatment of AIDS [13], thus our interest. We were also led to study this because of the role of CYP3A4 in endogenous metabolism, especially involving testosterone, as a possible contributing factor to heroin addiction. Heroin addiction in Malaysia is a predominantly male disease. It would therefore be interesting if an association can be found between altered CYP3A4 testosterone metabolism and heroin addiction.

Our results revealed that CYP3A4 was not polymorphic among Malaysian Malays, Chinese and Indians who were not opiate-dependent. Many previous studies failed to show significant polymorphism at the CYP3A4 locus. Rebbeck, et al. (1998) reported a 9.6% frequency for CYP3A4*1B in healthy White subjects [30] but Lamba, et al. (2002) reported a very low percentage among their healthy Caucassian, African Americans, Mexican, Pacific Islander and Middle Eastern subjects [12]. Mutant alleles, with some exceptions, appeared to occur only at low percentages. This probably implies an important role of CYP3A4 in endogenous metabolism and therefore mutations would most likely be selected out. It is assumed that evolutionary pressure acts against coding polymorphisms and environment tends to wipe them out.

Heroin addiction is a complex disease. It probably results from deleterious interactions between genes and the environment. Many genes have been studied for potential roles in heroin addiction and to date, we are not aware of any study to associate CYP3A4 polymorphism and heroin addiction. It was interesting therefore to find a 2.17 % frequency for CYP3A4*1B among our opiate-dependent subjects, against the background of an absence of polymorphism among Malaysian non-drug dependent subjects. P450 enzymes in liver microsomes have been reported to play important roles in the metabolism of steroids, fatty acids, fat soluble enzymes and prostaglandins [16] and CYP3A4 has been shown to be a major form that catabolised steroids in human livers. It is conceivable that altered CYP3A4 function may contribute towards addiction liabilities in subsets of individuals, either directly through altered metabolism of some putative, yet unknown endogenous substance(s) or indirectly through its effects on steroid and prostaglandin metabolism.

CYP3A4*1B allele is also known as CYP3A4-V and has an A→G substitution at position -392 on the 5’ promoter region. It was first identified by Rebbeck et al. in 1998 [30]. The functional significance of CYP3A4*1B mutation has recently been reported. CYP3A4*1B/ CYP3A4*1B genotype has been reported to reduce the absorption of indinavir in patients initiating Highly Active Anti-Retroviral Treatment (HAART) naïve patients [14]. This SNP has also been associated with the more aggressive forms and advanced clinical stages of prostate cancer in African-Americans but not in Portugese victims [31]. It also linked to increase transcriptional activity. The finding of a 2.17% frequency for CYP3A4*1B among our heroin using population was therefore interesting and the functional significance of this mutation may need to be elucidated. Future studies on its association should also probably include family data to allow for a transmission disequilibrium test to be performed. CYP3A4 is known to be involved in endogenous metabolism of steroid hormones, both testosterone (2β-, 6β-, or 15β-hydroxytestosterone) and estrogen (4- and 16α-hydroxylation) [32-35]. As far as addiction is concerned, stress influences the pathophysiology of addiction, to be linkages with drug dependence.

We conclude that CYP3A4 is polymorphic among heroindependent individuals. The mutation, CYP3A4*1B is not silent. This may have implications on heroin addiction liability as well as on dose requirements for MMT and HAART.

This work was supported by a USM grant under the “Research University Program” (Grant Number: 1001/PSK/8620014)