Plant-parasitic nematodes are considered a major pest in grape growing countries. The present study was conducted during June-November 2007. The aim of the pot experiments was to establish the impact of dry extract of Chlorella vulgaris on the ungrafted grapevine seedlings cv.“Palieri” infested with root ectoparasite Xiphinema index. Different dosages of Chlorella (0.5, 1.0, 2,0 g per plant/pot) were investigated. The results show a decrease in the number of X. index in the variants treated with 1g Chlorella. There has been a positive effect on the growth characteristics of the test plants at the same concentrations. The green algae Chlorella vulgaris as a powerful phytoprotector have strong stimulating effect on the plant growth.

Vitis vinifera is a crop grown all over the world especially in countries with Mediterranean and temperate climate. Vines have a great economic importance as one of the most popular plants in Bulgaria along with the vegetable crops. Grape plays an important role in European economics as an export goods and raw material for the production of wine and alcoholic drinks. It is well known that grapevine has different pests caused damage of the roots and leaves. Several nematode species are associated with grapevine roots. The most important being the ectoparasites from genus Xiphinema and some endoparasites from genus Meloidogyne.

The dagger nematode, Xiphinema index, is considered a major pest in grape growing countries. This nematode species is especially important because of its capability to transmit Grapevine Fan Leaf Virus (GFLV). Xiphinema index feeding on grapevine roots initially causes swollen club-like gall on root tips, which varies in size depends with the size and vigor of the root. Common symptoms of X. index feeding are plant stunting, chlorosis, root swellings or galls and root necrosis. Penetration of root by nematode stylet also makes them more susceptible to root-rotting fungi and GFLV which contribute to vine death [1]. In our country the damage of plant-parasitic nematodes of the family Longidoridae lead to 13% losses in vineyards [2].

The search for new pest control methods based on bioantagonist (the use of microorganisms, trap fungi or rhizobacteria) is an important aspect of sustainable agriculture [3]. Different control strategies are used for nematode management. Traditional control methods are based in the use of nematicides which are soil pollutants and also expensive. Some integrated managements includes crop rotations, use of amendments [4-6] and resistant rootstocks [7]. The use of different rootstocks is a good alternative, especially under replant conditions. But there is problem - most of these rootstocks are tolerant only to one or two nematode genera and sensitive to the other plant-parasitic nematodes present in soil and may also display high variability in different fields [8].

In the last few years, in Bulgaria, the priority is given to organic products and bio fertilizers (Johnson grass extract, vermicompost, Humustim etc.) that used for pest control and improving the plant growth in the variety of crops (orchards and fruits) with special emphasis on vegetables for direct human consumption [9-13]. These bio-products are safe for human, animals and environment.

Chlorella vulgaris, the object of this study is characterized with specific growing factor - “Growing factor Chlorella” which is proved as very potent immune-stimulator in living organisms. Because of high content in Chlorella of protein, amino acids, antioxidants, micro and macro elements and etc. its application has beneficial effect in some serious illnesses of people. The green algae Chlorella vulgaris refer to a group of powerful phyto-protectors. There is some data in the literature related to the effect of Chlorella as organic fertilizer on plants growth and yield [14-16] or plant-parasitic nematodes [6,17-20].

The aim of the study was to establish the effect of the green alga Chlorella vulgaris on the growth of test plants (grapevine cv. Palieri) and it influence on root ectoparasite Xiphinema index.

Green algae Chlorella vulgaris is grown near Petrich in South-West Bulgaria [21]. For the test dry extract of Chlorella vulgaris produced by “Golden apple”- Plamen Barakov is used. The trials included applying of 0.5g, 1.0g and 2.0g algae per plant/pot dissolved in 100ml water. The plants were watered once with solution.

The nematodes were taken from rhizosphere of naturally infested with Xiphinema index productive grapevines in the region of Pomorie town -South-East Bulgaria (42.55°N 27.65°E). They are placed in a pot with Ficus carica for artificial multiplication during 2 years.

For the experiment the nematodes were extracted from soil by Cobb’s sieving and gravity method [22] in combination with Baermann funnel method. Soil sieving (2mm, 150μm и 63μm) were using and a 48h decanting period through a Baermann funnel. Counting of nematodes from species Xiphinema index was carried out with stereoscopic microscope.

The study was conducted during June-November 2007 in Laboratory of Zoology, Department of Ecology & Environmental protection at Agricultural University of Plovdiv. Eight-variance experiment (Table 1) with ungrafted grapevine seedlings cv. Palieri (a plant per pot in three repetitions) and X. index was carried out during 6 months. Numbers of X. index in the infested variants are calculated on the base of six specimens /100 cm3 soil - this is the minimum number of nematodes for Bulgarian population of X. index that cause damage to the roots of the vine found by Choleva [23].

The results showed that the test plants from V4 (infested and non treated) were with a poorly developed vegetative part, in comparison with control variant (V5 - uninfested and non treated plants) - (Table 2 and Figures 1-3). The grape seedings have greatly reduced roots, with coral like malformation and typical initial necrosis caused by obligate ectoparasites Xiphinema index (Figure 4). 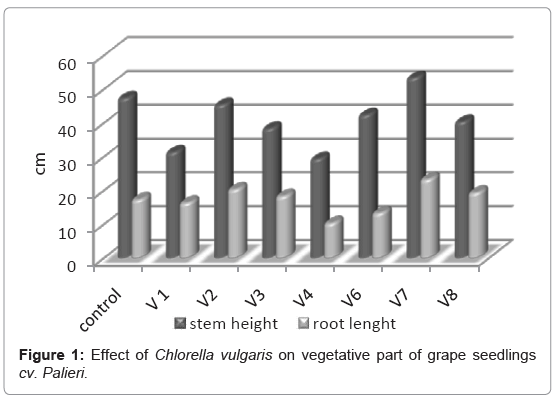 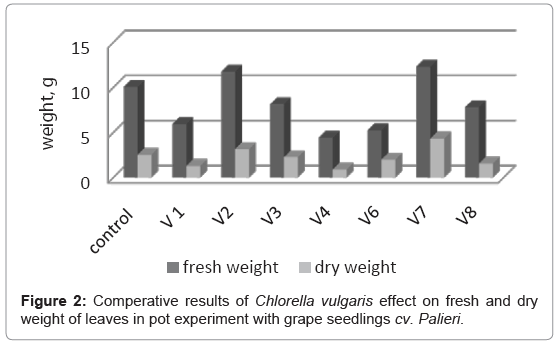 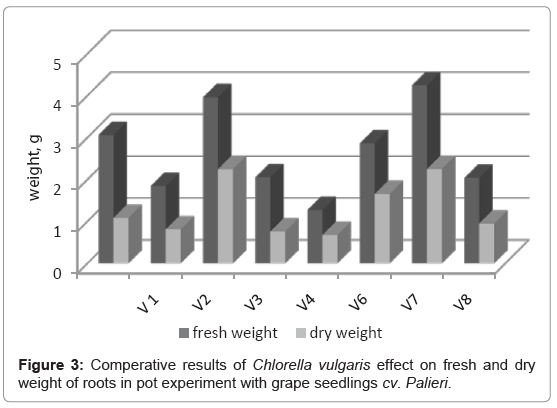 A phytotoxic effect in the variant with 2g Chlorella V8 (uninfested + 2g Chlorella) was observed (Figures 2 and 3). The plants are not fully grown, with least developed vegetative part and roots, with morphometric parameters close to the control variant. These results are in harmony with those obtained by [17,19,20].

Clearly positive impact on reducing the number of obligate ectoparasite X. index was observed in concentration 1g (V2 - infested and treated plants) with FP=21 sp./Pot) in comparison with IP=65 sp. /pot. High increase in numbers of dagger nematodes more than three times in comparison with initial population were recorded in infested control (V4 ) FP=214 sp./pot. There is a weak suppression of X. index FP=43 sp./pot in application of 0.5 g Chlorella (V1 ).

According to the results obtained in this study, it may be concluded that:

• Strong stimulating effect on growth was recorted in the treatments of plants with 1g Chlorella vulgaris (V2 and V7 ). Chlorella in this concentration (1g) has suppressing effect on root ectoparasite Xiphinema index.

• Chlorella vulgaris at low doses stimulates growth of grapes consisting in etiolating of the vegetative part.

• It was found that the concentration of 2g of Chlorella has phytotoxic effect on the vines.

• Chlorella vulgaris is a growth promoter for grapevine seedlings.

It is recommended to farmers that organic fertilizer Chlorella vulgaris should be included in technology for replanting of old vineyards, with special attention to areas threatened by the presence of dangerous pathogen Xiphinema index vector of GFLV.

Copyright: ©2013 Bileva T. This is an open-access article distributed under the terms of the Creative Commons Attribution License, which permits unrestricted use, distribution, and reproduction in any medium, provided the original author and source are credited.