Is Body Weight Loss a Harbinger of Methamphetamine-induced Neurotoxicity?

Copyright: © 2012 Dluzen DE, et al. This is an open-access article distributed under the terms of the Creative Commons Attribution License, which permits unrestricted use, distribution, and reproduction in any medium, provided the original author and source are credited.

Methamphetamine (MA) is a drug of abuse of societal concern. Euphoria, increased energy/alertness and enhanced libido all contribute to the appeal, and therefore, abuse of this psychostimulant. Weight loss represents still another attribute of MA as indicated in both human [1-4] and animal [5,6] studies. In fact, weight loss has been reported as a reason for MA use [7-9] and MA under the trademark name Desoxyn, has been approved for use clinically in the treatment of exogenous obesity, as well as for ADHD and narcolepsy [10].

In animal studies, MA has served as an agent to induce neurotoxicity within the Nigrostriatal Dopaminergic (NSDA) system, and thus a means to study conditions that modulate this neurotoxicity. For example, sex, hormonal factors and adrenergic blockers all affect the degree of MAinduced neurotoxicity [11-16]. A summary of the pair wise differences in MA-induced neurotoxicity (dorsal striatal dopamine depletion) for these three different factors, along with the corresponding changes in body weight to MA is illustrated in panels A-C of the Figure 1. In all three situations, conditions showing greater amounts of dopamine depletion (A-males versus females, B-testosterone (TP) versus sesame oil vehicle treated controls, C-Propranolol (PROP) versus Prazosin (PRAZ)) are associated with the greater amounts of body weight reductions. 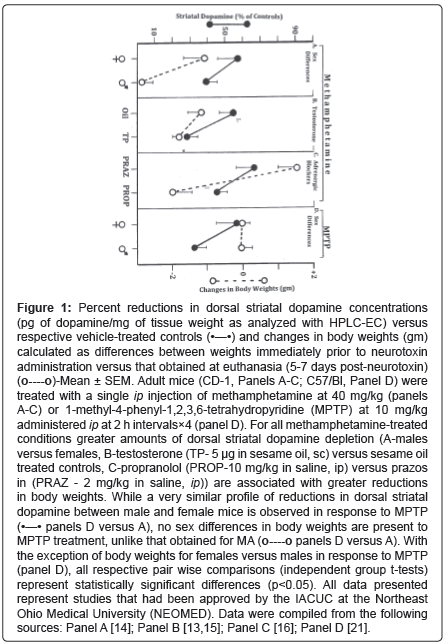 Figure 1: Percent reductions in dorsal striatal dopamine concentrations (pg of dopamine/mg of tissue weight as analyzed with HPLC-EC) versus respective vehicle-treated controls (•—•) and changes in body weights (gm) calculated as differences between weights immediately prior to neurotoxin administration versus that obtained at euthanasia (5-7 days post-neurotoxin) (o----o)-Mean ± SEM. Adult mice (CD-1, Panels A-C; C57/Bl, Panel D) were treated with a single ip injection of methamphetamine at 40 mg/kg (panels A-C) or 1-methyl-4-phenyl-1,2,3,6-tetrahydropyridine (MPTP) at 10 mg/kg administered ip at 2 h intervals×4 (panel D). For all methamphetamine-treated conditions greater amounts of dorsal striatal dopamine depletion (A-males versus females, B-testosterone (TP- 5 μg in sesame oil, sc) versus sesame oil treated controls, C-propranolol (PROP-10 mg/kg in saline, ip) versus prazos in (PRAZ - 2 mg/kg in saline, ip)) are associated with greater reductions in body weights. While a very similar profile of reductions in dorsal striatal dopamine between male and female mice is observed in response to MPTP (•—• panels D versus A), no sex differences in body weights are present to MPTP treatment, unlike that obtained for MA (o----o panels D versus A). With the exception of body weights for females versus males in response to MPTP (panel D), all respective pair wise comparisons (independent group t-tests) represent statistically significant differences (p<0.05). All data presented represent studies that had been approved by the IACUC at the Northeast Ohio Medical University (NEOMED). Data were compiled from the following sources: Panel A [14]; Panel B [13,15]; Panel C [16]; Panel D [21].

A cursory and seemingly obvious conclusion would be that the greater extent of neurotoxicity produces a corresponding greater degree of generalized malaise, as indicated by body weights. The data presented in panel D of the Figure 1 suggest that this may not necessarily be the case. Here are presented results obtained using a similar sex-differences protocol as that presented in panel A, however, with NSDA neurotoxicity induced by 1-methyl-4-phenyl-1,2,3,6-tetrahydropyridine (MPTP). While nearly identical dorsal striatal dopamine reductions are obtained with MA and MPTP (A versus D), the corresponding sex differences in body weight present to MA, are completely absent with MPTP (A versus D). Such results suggest that sex differences in response to neurotoxins targeting the NSDA system do not inescapably generate identical changes in body weights. Rather, body weight reductions following MA treatment appear to be closely associated with the degree of NSDA loss and are specific for MA-induced NSDA neurotoxicity.

Confirmation or refutation of this intriguing relationship awaits further investigation involving formal experiments on dose-response, time-course, cross-species analyses and food restriction/palatability. Moreover, differences in MA regimes between the mouse models as described above and the clinical/street use of this drug also warrant consideration in evaluating this relationship. While remaining cognizant of these limitations, data derived from these animal experiments have served as relatively valid and reliable models for indices of effects in humans. Women show less toxicity [17] and diminished dopamine responses [18] to MA/amphetamine as compared with men, which is similar to that of results obtained with mice [19,20]. Of particular relevance to the present report, are the findings indicating that weight loss is a pervasive characteristic of MA, as seen in mice and humans [1-6]. Given that one of the presumptive “benefits” of MA, both as a street drug and for clinical application is its capacity for weight reduction, an important implication for this relationship between body weight and neurotoxicity as described above is the potential for unwitting damage to the NSDA system as associated with the weight reduction resulting from MA. Rephrased as a question: Is Body Weight Loss a Harbinger of Methamphetamine-induced Neurotoxicity?