Study background: The objective of this study was to make a Randomized Controlled Trial (RCT) of laryngopharyngeal reflux treatment based on a sufficient number of patients (referring to our Cochrane review 2009).

Material and methods: In order to detect differences prospectively of treatment effect in a randomized controlled trial, the following treatments of Laryngopharyngeal Reflux (LPR) were compared: lifestyle advice, lifestyle advice combined with proton pump inhibitor, and life style advice combined with proton pump inhibitor and alginate. Subjective complaints of LPR were stored and the objective evaluation of interarytenoids oedema of the larynx was evaluated visually on high speed films, with minimum of 2000 frames per second, a supplement of routine acoustical measures were made.

Results: A total of 237 patients were randomized based on the planned statistical power calculation of 90% to detect a difference of 20%, under the assumption that the true difference was 5% and that the standard deviation was 25%. The differences between the three groups were found not to be statistically significant, but there was a general positive effect of treatment.

Laryngopharyngeal reflux (LPR) diseases are diagnosed commonly with reduced voice function, also in singers. According to Hopkins et al. [1,2] (2009 Oxford Cochrane systematic review on acid reflux and hoarseness), no evidence-based controlled studies have been defined, the main problem being the small amount of patients in the studies.

The main symptoms of LPR are probably related to regurgitation of acid to the larynx, and other related factors disturbing the mucosal function in the larynx, including pepsin and changes of the movement of the oesophageal muscles [2,3]. LPR can greatly affect the quality of life [4,5] by reducing the patient’s ability to communicate vocally and to sing.

According to Gupta and Sataloff 2009 [6], evidence supporting or refuting the utility of proton pump inhibitors in LPR is lacking, and well designed studies are needed. LPR might only be a laryngeal sign of Gastroesophageal Reflux Disease (GERD) [1].

In the Cochrane review on acid reflux treatment for hoarseness, updated 2009 [2], a total of 6 randomized controlled trials (RCT) were found. The number of patients ranged from 15 to 145 patients. A metaanalysis could not be carried out since the definition of hoarseness was not sufficiently exact and the amount of patients was too small. An attempt on meta-analysis showed effect of treatment with proton pump inhibitors on laryngeal manifestations of GERD [7].

The objective of this randomized controlled trial was to detect even very small efficacy differences between the following treatments of LPR:

All participating patients were required to sign a written consent, which was scanned and stored in the database.

All the included patients were aged 18 or over.

The required symptom duration for inclusion was at least 2-4 weeks. Each participating patient had, as minimum, three subjective complaints of LPR [8]. The presence of inter-arytenoid oedema, documented with high speed films, was also required for the inclusion to the study [9].

The specific LPR symptoms were:

• Hoarseness or a problem with your voice

• Coughing after you ate or after lying down, troublesome or annoying cough

• Heartburn, chest pain, indigestion or stomach acid coming up, pain or burning feeling in the throat.

Reasons for exclusion were: Under 18 years of age, less than three subjective complaints, lack of oedema of the inter-arytenoid region on high speed films. Other reasons were malignancies, pregnancies, and lack of cooperation.

The data collection in the database of patients was made during a period of 2½ years.

The design and upper airway test parameters are routine examinations at ear-, nose-, throat clinics for laryngological patients with benign disorders. The first examination included the tentative diagnosis of LPR, planning of examinations, complaints and related treatment. The second examination after two weeks was used for evaluation of results of examination including blood tests, and treatment evaluation, and the third examination mostly after two to three months was for a follow up. The high speed films were recorded with equipment from Wolf Ltd. The Multi-Dimensional Voice Program (MDVP, by Laryngograph Ltd.) was used for sustained tone and for continuous speech including frequency, intensity and electroglottograms.

All parameters were stored in the software program based on FileMaker Pro 8.5.

Computerized bullets and numbering in the database were used for the randomization of patients into the three groups:

• Lifestyle guidance and added treatment with the proton pump inhibitor esomeprazole 40 mg, one tablet at night

A total of 49 patients were needed in each group to obtain a power of 90% in a two-group, one-sided, t-test to detect a difference of 20% under the assumption that the true difference was 5% and that the standard deviation was 25%. Based on this general consideration and taking into account, possible drop out and evaluation of multiple endpoints, a total of 237 patients were randomized in the study.

Each numerical week 2, endpoint was evaluated in an analysis of covariance including baseline value as covariate and treatment group as fixed effect. This included interarytenoids oedema scores.

For each endpoint the hypotheses were tested:

• An effect of treatment of laryngopharyngeal reflux based on subjective complaints and high speed films.

Missing values were analyzed as such and no imputation was made, which means that missing data was not included in the analysis.

The study comprised a baseline visit with complaints of LPR as the inclusion criteria and a visual interarytenoid oedema on high speed films with 2000 frames per second. The investigator was blinded as to the allocation of the patients in the groups, prior to inclusion where the lowest randomization number was given. At the second examination, the follow up was planned after a period of two to three months.

The symptom evaluation was dichotomized in the way that each symptom was considered maximally present or absent. As for the objective findings, a scaling for the interarytenoid oedema of one (normal) to five; total closure of larynx was used on the high speed films [9].

The correlation between the interarytenoid oedema score and the subjective complaints of LPR was evaluated in a scatter plot where the total number of symptoms was plotted against the interarytenoid oedema score at the week 2 visit. To visualize all the data points, the values were jittered by adding white noise (Normal distributed with SD of 0.1). The Spearman correlation coefficient was calculated on the original values before adding the white noise.

Included in the study were 237 patients (172 females and 65 males) with subjective complaint of LPR and oedema of the inter-arytenoids region. A total of 195 (82%) were followed up after 2 weeks, and 144 (61%) patients were available at the follow up visit after 2-3 months. In Table 1, gender distribution and number of patients for each treatment group is presented. We did not find differences between the genders for complaints and analyses.

1Comparison of means between treatment groups to Lifestyle treatment group. The test is a two-sided test in the linear statistical model that includes baseline number of symptoms as a covariate and treatment as a fixed effect.(CI =confidence interval) .

Lifestyle guidance, with added esomeprazole, and added esomeprazole and alginate, reduced subjective complaints of LPR and the interarytenoid region oedemas on the high speed films. There was no difference between the three groups comparing lifestyle change, added esomeprazole and added alginate. No difference was found between the three groups for the acoustical and electroglottographic measures of voice, using the well defined Multi Dimensional Voice Program (MDVP) (SPEAD including electroglottigraphy (EEG) software by Laryngograph Ltd.). The lack of change of those acoustic measures has also been observed in another recent study [10]. Other voice measures, such as harmonics to noise ratio (HNR) and phonation time may give another picture of the voice function than EGG, frequency and intensity variation, and a change may be seen in these parameters [11]. Future studies could therefore include these voice parameters. Till now, few evidences of acoustical analyses of the voice have reached the level where meta-analyses could be used [12,13].

The subjective complaints of laryngopharyngeal reflux were reduced in all three groups after treatment, significantly related to the reduction of the interarytenoid oedema on high speed films. High speed films show the real time laryngeal results. This was earlier discussed in a study comparing stroboscopy and online EGG, which gives more information than stroboscopy alone [14]. As shown in Figure 2, the mucus only comes up to the arytenoids and disappears again within 0.2 seconds. This is due to a very specific defence mechanism in the larynx that is not yet understood. 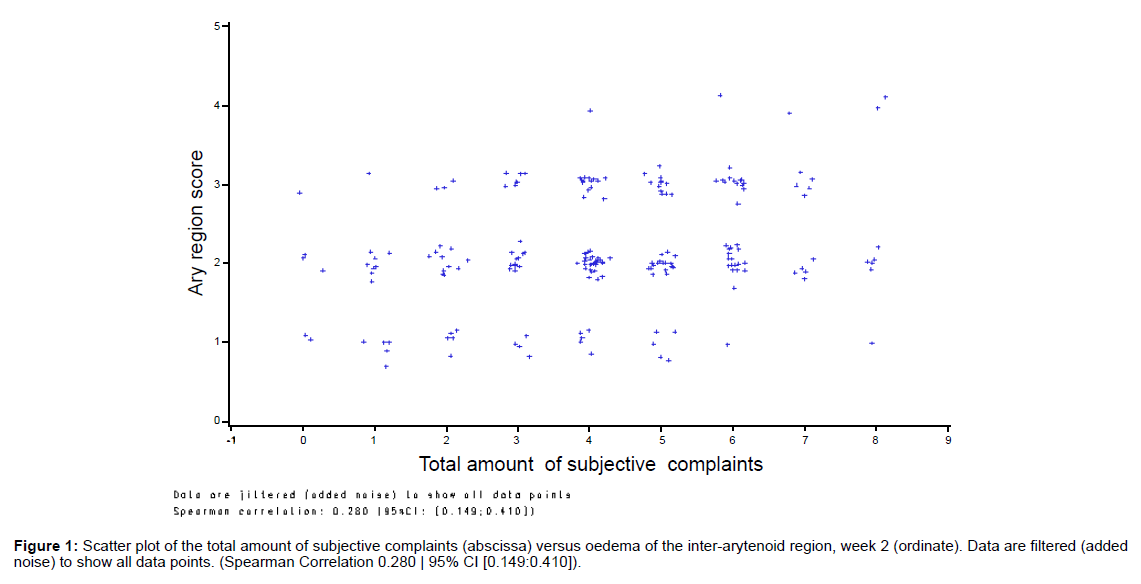 The results of the study indicate that there is only a non-statistical effect of esomeprazole and alginate that is better than lifestyle guidance alone in patients with LPR. The results of this study may be critically important, as there are adverse effects of long-term proton pump inhibitor use [15] and that the currently used LPR treatment is a costly affair.

As mentioned in the introduction, clinical diagnosing the symptoms of the patients as LPR can be difficult. A systematic cooperation between otolaryngologists and gastroenterologists could be established for differentiation of LPR and GERD. Studies should highlight the effect of lifestyle change, especially in singers with different singing techniques. The open label design was not biased in the results. Optimally, the treatment should be double blinded using dummy tablets (placebo) to avoid the bias introduced for assessing the patients’ efficacy.

Figure 2: Frames taken from high-speed video set on recording 4000 pictures per second. The picture, at frame 1272 shows the appearance of mucus in the larynx, and shortly after (frame 1551) it is reduced. On frame 2116, the mucus has disappeared. The process took a total of 0.2 seconds.

The dropout rates were comparable between the treatment groups (between 16 and 20%). A fall in the high speed film evaluation interarytenoid oedema scores was seen from baseline to week two, which means that the scores can detect differences over time on high speed films. With these measures, it might be a possibility to discover new medications for LPR, and guidelines for medications for LPR might be developed in the same way as they exist for medications for gastrooesophageal reflux disease [1]. They may also provide an understanding of the function of the laryngeal mucosal defence mechanisms with newer scanning methods [16].

The discussion of immunological understanding of the voice is necessary – also based on arytenoids oedema and will be adding new perspectives of treatment in the future [17].

Treatment of laryngopharyngeal reflux (LPR) with lifestyle corrections within two weeks in this randomized controlled study, based on high-speed films and subjective complaints, is as effective as treatment with lifestyle with and without PPI and alginates. Even though the study was sufficiently powered to detect a 20% difference, only non-statistically significant effects were seen for esomeprazole and alginate on top of lifestyle guidance. The study indicates that further scientific approaches are necessary to understand what is going on in the mucosal larynx defence in LPR using high speed films for diagnose and evaluation of treatment related to the arytenoids region.

The study showed that it was possible to detect differences over time using the 5 grade visual grading of the arytenoid oedema of high speed films.

1Avoid following: smoking, fatty and smoked food, coffee, chocolate, spices, strong alcohol (alcohols containing a lot of tannins), acidic fruits and juices. No food after 21:00 avoid over eating. You should sleep with your head high. Singers should avoid eating just before a concert.

Copyright: © 2012 Pedersen M, et al. This is an open-access article distributed under the terms of the Creative Commons Attribution License, which permits unrestricted use, distribution, and reproduction in any medium, provided the original author and source are credited.