Copyright: © 2011 Demarie D, et al. This is an open-access article distributed under the terms of the Creative Commons Attribution License, which permits unrestricted use, distribution, and reproduction in any medium, provided the original author and source are credited.

We describe a case of 28 years old woman, HIV and HCV coinfected, addicted to cocaine and heroin, and alcohol. The patient was in methadone maintenance therapy with 60 mg / die.

She was referred to cardiology department on September 2009 because of syncope associated with noise tachycardia. Orthostatic hypotension was present associated with presyncope symptoms The ECG showed a very long QT about 0,580” (Figure 1) and ventricular extra systolic beats in couple and triplets. There were not abnormalities of P duration, PR interval and QRS duration both at hospital admission and at 18-months of follow up. 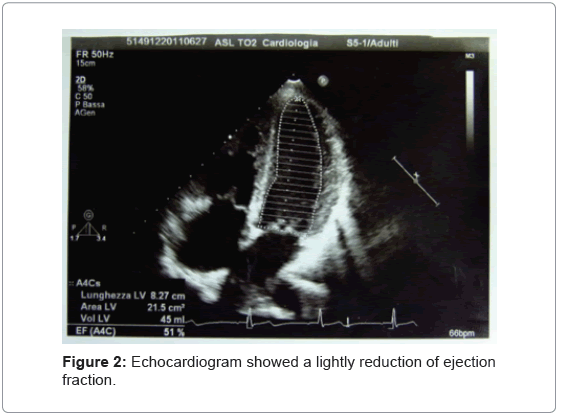 The CD4 level, at hospital admission was 243/μL, the viral load was high and a sub clinical human papillomavirus infection (HPV) was present.

Echocardiogram performed when the patient was admitted to the hospital, (Figure 2) showed a transient reduction of ventricular ejection fraction that completely normalized in following echocardiograms upon beginning ARVT. There were not valvular abnormalities.

Holter monitoring presented a high number of ventricular arrhythmias, (i.e ventricular couples and triplets and some runs of non sustained ventricular tachycardia) (Figure 3). During the treadmill exercise test the patient was stopped at 4’ of exercise for ventricular bigeminy (Figure 4).

Because of poor compliance of the patient, genetic test to evaluate congenital long QT syndrome was not performed, even if at the Schwartz point system for the diagnosis of congenital LOTS our patient reached four points.

Beta blocker therapy was started with methoprolol 25 mg once a day. It was impossible to increase the dose because the patient had low blood pressure and low heart rate. Methadone treatment was reduced until 40 mg a day.

In 18 months of follow up, the patient avoided cocaine, heroin and alcohol abuse, but the QT interval remained very long (>500 msec) , P wave, PR and QRS intervals did not change.

Control exercise test was stopped At 9’ of exercise. The test showed; always a prolongation of QT interval but major ventricular arrhythmias disappeared.

Long QT syndrome is more frequent in subjects infected with HIV than in the general population and has been reported to occur in up to 29% of the hospitalized HIV-positive patients. Why long QT syndrome occurs more often in HIV-positive patients is currently unknown. There are multiple possible explanations why long QT syndrome is more prevalent in HIV-infected patients [4]. HIV-positive patients frequently receive medications that prolong the QT interval such as diflucan, clarithromycin, and cotrimoxazole. Furthermore, antiretroviral drugs themselves have been implied to cause prolongation of the QT interval. Whether HIV infection itself might cause heart disease and QT-interval prolongation is controversial. Autonomic dysfunction due to HIV-associated neuropathy [5,6] is also a presumed cause of long QT syndrome in HIV patients and could have been a contributing factor in our patient, who suffered from HIV-associated peripheral neuropathy (i.e. orthostatic hypotension).

In our patient genetic test to value congenital long QT syndrome was not performed, even if at the Schwartz point system for the diagnosis of congenital LOTS. She reached four points [7] because of her poor compliance. She had many causes of acquired long QT syndrome.

Our case is very atypical because the normalization of QT interval happened when the ARVT was started. For this reason, we looked for a possible explanation in genetic mutation of main metabolizing methadone enzymes [10], and/or possible inter drug interference between efavirenz and methadone [11].

As our Knowledge there are many reports in which efavirenz [12] a non nucleoside reverse transcriptase inhibitor is responsible for acquired long QT syndrome and torsades de pointes. Genetic test to value the function of CYP2B6 and CYP3B4 was performed and showed a very low activity of CYP2B6 with normal function of CYP 3A4. The introduction of efavirenz that was in normal range decreases plasma methadone level. In fact efavirenz is a very effective non-nucleoside reverse transcriptase inhibitor (NNRTI). Efavirenz is metabolized in the liver, and is both a substrate and inducer of the 2B6 and 3A4 isoforms of the cytochrome P450 system. This means efavirenz may interact with other drugs metabolized in the liver like methadone, decreasing its blood concentration [13]. In fact the patient showed withdrawal symptoms when methadone dosage was reduced [14].

We consider this case very interesting, because it links scientific and clinical aspects. The results of genetic test, in fact, confirm our study hypothesis. Moreover, it improves our clinical management, showing how is important to personalize therapy, especially in very complex drug interactions.