The Lagos Lagoon, a tropical estuary with surface area of nearly 208 km2 is a habitat for a variety of fauna including plankton, nekton and benthos [1-6]. Salinity is the major variable ecological factor in the lagoon with values ranging from 0.05- 28.7‰ [1,3,7]. The other environmental factors like water temperature, pH and dissolved oxygen are nearly constant in both the dry and rainy seasons.

The blue crab belonging to the group of decapod crustaceans support a major fishery in the lagoon exploited mostly by women. The crabs form a major food item for the coastal communities in Nigeria and other West African countries. Aspects of the biology of the blue crab, Callinectes amnicola in West Africa have been studied by Kwei [8] on the growth pattern and maturity in two Ghanaian lagoons, Chindah et al. [9] on the food habits in New Calabar River, Lawal-Are and Kusemiju [10] on size composition, growth and feeding habits in Badagry Lagoon, Akin-Oriola et al. [11] on morphometric and meristics studies and Lawal-Are [12] on racial studies.

The reproductive biology of the blue crab in the estuarine environment of the Lagos Lagoon has also been documented by Lawal- Are [13]. The salinity gradient in the lagoon definitely gives a wide scope of salinity regimes to allow the various physiological adaptations to be accommodated in order to complete appreciable part of the life cycles of the blue crab in the lagoon.

The Lagos Lagoon, a tropical estuarine lagoon with a surface area of 208km2 is located between latitudes 6º 26′N and 6º 39′N and longitudes 3º 29′E and 3º 50′E [14] (Figure 1). It is an open tidal estuary. The lagoon is fed in the north by Ogun River. The lagoon opens into the Atlantic Ocean via the Lagos Harbour. River Ogun its major source of water, discharges a large volume of water into the lagoon and as a result of this, the salinity is very low during the rainy season [1,7]. Lagos Lagoon is shallow in depth and in most places it is a little more than 1.5 meters deep [15]. The lagoon has mangrove swamp vegetation at its periphery. The notable species are Paspalum orbiquilare, Rhizophora racemosa and Avicennia nitida. The major fauna include Periopthalmus sp, Ballanus pallidus, Uca tangeri, Seserma sp, Gryphea gasar and Tympanotomus sp. This study covered both laboratory and field investigations. It was carried out during the dry season months of March and April 2004 which Lawal-Are [13] reported as the peak spawning period for the blue crab in Lagos Lagoon.

Ten live crabs (5 males and 5 females) picked from crabs collected from the Lagos Lagoon and acclimatized at 15‰ were placed in each of 30-litre bowls having salinity regimes of 15‰, 20‰ and 25‰. The sizes of the crabs ranged from 6.7-8.2 cm carapace width (weight of 11.5 to 23.4 g). The holding bowls were made up of coloured plastic to reduce the effect of direct sunlight. Each bowl contained ten litres of water. The crabs were fed with white meat of chicken parts at 5% of their body weight [6]. Change of water in each bowl was carried out every 48hr or when necessary. The crabs were observed daily for reproductive activities. The experiment lasted 16 weeks and was replicated.

Plankton from four stations (A, B, C, and D in Figure 1) was collected using standard plankton net of 55 μm mesh size. The net was tied to a motorized boat and towed horizontally at a low speed (< 4 knots) for ten minutes. Two hauls were made in each station. Two fortnightly trips were made in each of the four stations for two months. The stations represent areas in the lagoon where the crab population is high and crab fishing activities are normally carried out. The plankton hauls were made during high tide and at daytime.

The larval stages of the blue crab in the plankton hauls were identified using the taxonomic keys of George et al. [16].

During the course of this study, the physico-chemical parameters, water temperature, dissolved oxygen content, salinity and pH were measured ‘in situ’ in the lagoon and in the experimental bowls. Salinity was measured using a refractometer (BIOMARINE Aqua Fauna Model). Water temperature, dissolved oxygen and pH were measured using Rosemount Analytical Solu Bridge Model RB6-349AKFx37. Continuous aeration was provided in each bowl with an air pump through rubber tubing fitted with air stone. Transparency was measured using a 20 cm black and white Secchi disc. The physicochemical parameters were measured in the lagoon at the same stations and time when the plankton hauls were made in stations A, B, C and D (Figure1). Measurements were taken at about one metre below the water surface, at this shallow area of the lagoon (about 1.5 meters deep).

Mating/pre-copulation of a male and a female crab were observed during the experiment in a salinity concentration of 15‰ and 20‰. The mature male (8.3 cm carapace width) clamped the female (10.5 cm carapace width) beneath it for three days in salinity concentration of 15‰ as shown in Plate 1 during which time there could have been internal fertilization. They became separated after the three days but did not entangle anymore. It was noted that after separation the female was not too active unlike the male. Plate 1: Mating / pre-copulation of male and female crab in salinity concentration of 15‰.

Molting also took place in C.amnicola at 15‰ and 20‰ during this laboratory experiment, with total body change in 15‰.

The occurrence of larval stages of C.amnicola obtained from the four stations for the months of March and April, were pooled and presented in Table 1b as number of cells per ml in the lagoon. The early zoea larva (stage 4), late zoea larva (stage 6) and megalopa were obtained in the hauls and these are shown in Plate 2. 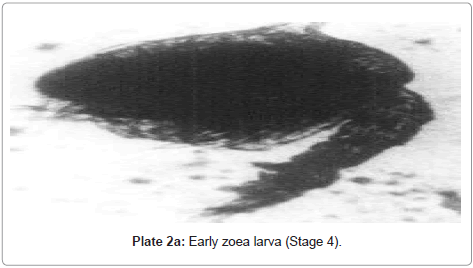 The physico-chemical parameters of water from the western part of the lagoon where active blue crab fishery takes place and where the larvae were obtained are presented in Table 1a. Water temperature ranged from 27.1 to 30.0ºC. Salinity ranged from 20.5 - 24.5‰. Dissolved oxygen was between 4.0 and 11.0 mg/l while pH ranged from 7.0 to 7.6. Transparency ranged from 0.93 to 1.20 m.

The mating/pre-copulation of a male and a female crab was observed during the experimental study in salinity concentration of 15‰. The mature male clamped the female beneath it for three days during which there would have been internal fertilization. Guillory [17] noted that the male uses its first pair of walking legs to carry the female against its sternum in a “cradle carry” position. According to Hartnoll [18], fertilization is internal in brachyuran crabs using the two pairs of modified pleopods, the male transfers spermatozoa encapsulated in spermatophores to the oviducts of the female.

They were separated but did not entangle anymore. According to Harris [19], the male and female crabs assume the doubler position (male carrying female) and may stay this way for 2-3 days both before and after mating. During mating the male transferred the sperm to the female after she had shed her shell. After pre-copulation the male held the female until she developed a hard shell; then they separated. After mating the female migrated to the saltier portions of the lower bay and gulf [20] while the males remained in the estuary as [13]. Generally, copulation occurred shortly after the female moults, stimulated by pheromones which are released before or after ecdysis [21]. Passono [22] reported that the molting hormone crustecdysone was the only pheromone responsible for initiating of mediating reproduction [23,24].

Lawal-Are [13] also documented molting in C.amnicola from the Lagos Lagoon under this laboratory experimental condition at salinity of 15‰. It is thus apparent that molting and mating take place in the crab in the western part of the lagoon when the salinity is about 15‰ during the dry season with peak in March/April. This is a very sensitive part of the life cycle of the crab in the lagoon when the molting and mating crabs are exposed to predation and should be protected from exploitation if the crab fishery in the lagoon is to be sustained. A conservative measure may be to prohibit crab fishery in this part of the lagoon during this period to allow for molting and mating reproductive activities to be successfully carried out. The presence of three stages of larval development of C.amnicola [early zoea larva (stage 4), the late zoea larva (stage 6) and megalopa] observed in the plankton haul in the Lagos Lagoon during the month of March and April was indicative of this latter part of the larval development occurring in the lagoon at salinity range of 20 - 24.5‰. The other early zoea stages may occur in the high brackish water of the Lagos Harbor or probably in the adjacent Atlantic Ocean. According to Turner et al. [25] hatching of blue crabs occurred at salinities of 22 - 33‰ and temperature of 19 - 29ºC On the average, only a few out of every million eggs survived to become mature adults (about 0.0001%). Prochaska and Taylor [26] noted that hatching has been observed to coincide with tidal cycles, presumably to maximize larval dispersal and survival. The larvae called “zoea” or “megalops” look very different from adults. Larvae passed through 6 or 7 stages in about two months before coming crab-like in appearance. Young crabs moved towards areas of less salty water, where they grew to maturity in about one year [27]. C.amnicola can thus utilize the wide salinity gradient in the Lagos Lagoon to complete appreciable part of its life cycle.

The authors are grateful to the University of Lagos for the facilities provided for this study and to Mr. Number Emubaiye for assistance during the field trips.