Objective: There is no special catheter used for carotid angiography in the market. We studied the efficacy feasibility and safety of Femoral S carotid catheter (made by shaping existing catheters) in this study.

Results: The Baseline characteristics of the patients were record. The total time of the procedure with the new catheter was found 7.2 ± 1.3 min and the amount of opaque media used was 50.20 ± 15.60 ml. Selective imaging success was high 95%. Minor Complication (local hematoma, leg pain, dizziness, headache, hypotension, allergic reaction of the contrast media) development was found 3.8%. Permanent damage, morbidity and/or mortality were not seen in patients.

Discussion: The right judkins catheter is usually preferred in the carotid angiography performed with the femoral route. The newly developed catheter does not stick to the aortic wall because the tip is in the “S” shape. Therefore, the processing time is shorter and the imaging performance is better than multipurpose catheter.

As is known, the association of coronary atherosclerosis with peripheral atherosclerosis is very common. This frequency is predictive of the likelihood of someone from stroke, kidney failure, and limb ischemia in the people with coronary artery disease (CAD). It may be beneficial for the patient to look at other possible atherosclerotic vessels at the moment of coronary angiography.

Catheter reshaping is an ancillary method used in catheter laboratories, to increase success in imaging modalities. The number of physicians who use this method to display vessels with origin abnormality is steadily increasing. In our laboratory, we also use catheter reshaping since long time for cases where the existing catheters are inadequate for the imaging of vessels with origin anomalies [7,8].

Since 2009, we have performing coronary angiography followed by carotid angiography with heart diseases that are we suspect of carotid artery disease to the patients who signed informed consent form(those who had, suspicious carotid artery stenos in Carotid Doppler USG, those who had stenos in the USG, whose murmur was heard in the neck, and stroke in his history).

Carotid artery and coronary angiography were not performed on patients those who had, kidney failure, the same limb ischemia, no femoral pulses.

In addition, no carotid angiography was performed at risky persons (Those who had severe plaque in the carotid ostia, severe atherosclerotic calcified aortic cases, severe skeletal anomalies, major thoracic injuries, aortic surgery, aortic aneurysms with a diameter is larger than 5.0 cm).

156 patients underwent carotid angiography with a newly developed Femoral S catheter. The all patient data and the results were transferred to SPSS and analysed.

The femoral region was disinfected and local anaesthesia was performed with 10 cc, 0.05 prilocain. The femoral artery was cannulated with Terumo 6f sheet. The left coronary artery was visualized with a JL catheter, the right coronary artery was visualized with a JR catheter, and then the carotids were imaged with a Femoral S catheter in the patients. A 6F multipurpose catheter was used to generate each Femoral S catheter. The Reshaping was done in the lab at the time of operation (Figure 1). 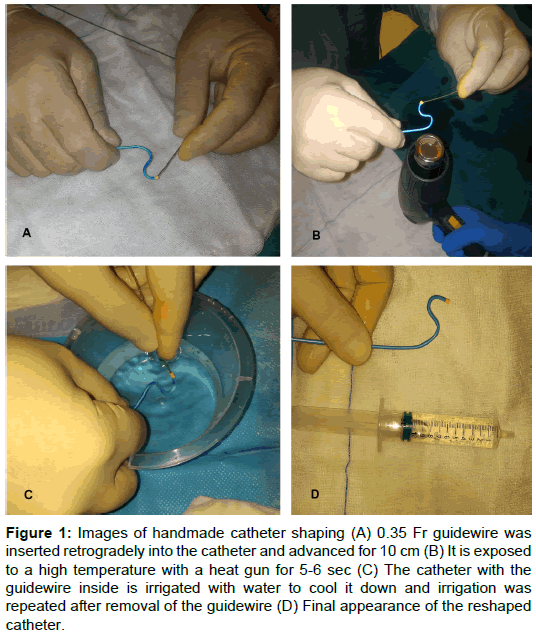 Figure 1: Images of handmade catheter shaping (A) 0.35 Fr guidewire was inserted retrogradely into the catheter and advanced for 10 cm (B) It is exposed to a high temperature with a heat gun for 5-6 s (C) The catheter with the guidewire inside is irrigated with water to cool it down and irrigation was repeated after removal of the guidewire (D) Final appearance of the reshaped catheter.

Distal tip of the 0.035 guide-wire we used in angiography was inserted through distal tip of the catheter, and advanced for 10 cm, and then with the aid of the guide-wire the required shaping was performed. The desired styling was done, afterwards the end of the catheter was held 10 cm away from the heat gun and exposed to hot air for 4-6 s, Immediately after, the Heated and shaped catheter tip was inserted into sterile isotonic water, Using a plastic injector, the catheter with the guide-wire inside was irrigated from its opposite end with sterile isotonic saline solution. The wire was removed and cooling with water was continued before the cooling was completed. As the catheter cooled, it was advanced to the arcus aorta with the help of a 0.35 guide-wire. The carotids were found and displayed with catheter rotation (Figures 1-3). Angiographic data of all patients, laboratory results, and registered epicrisis data were retrospectively reviewed. All the data were analysed after loading the SPSS.

Continuous variables are presented as mean ± standard deviation and nominal variables as numbers and percentages. A 2-sided P-value below 0.05 was considered significant.

The Baseline characteristics are recorded. In the patients of femoral S catheter (n: 156), the procedure time was found mean 7.2 ± 2.3 min and the amount of opaque used 50 ± 15 ml. The incidence of minor complications was found (n=6) 3.8%. Major complications, morbidity and mortality were not observed in our patients (Tables 1 and 2).

There is a strong correlation between coronary atherosclerosis and cerebral and carotid atherosclerosis. Carotid imaging at the moment of coronary angiography is an opportunity for the patient. CT angiography, MR angiography may show the degree of the narrowing of the carotid artery, but is not as satisfactory as invasive angiography on the about assessing the presence of thin fissures. They cannot correctly display the plaque character, whether it is sensitive plaque or not, the presence and severity of plaque cracks. For all these reasons, invasive angiography in carotid imaging is still the gold standard [2,12-15].

Most of the available angiography catheters have been designed for the femoral access. Carotid angiography can be performed with the Judkins Right catheter, one of these catheters. Nevertheless, the complication can be seen more with inexperienced hands and conventional techniques. This situation discourages physicians from making carotid angiography [16-18].

There are publications about the investigating reliability of transradial coronary and carotid angiography and their advantages over the femoral access. However, carotid imaging with the transradial approach is more difficult and requires more experience. Therefore, the first preferred route for carotid angiography is the femoral way. New catheter development is needed for physicians to making easier and safer carotid imaging with femoral way [19-26].

The Femoral S catheter that we have developed for this purpose seems to be more advantageous than the JR catheter. The catheter tip does not frict the aortic wall when rotating this catheter. Thanks to the “S” shape of our new catheter, it is possible to maneuver without 0.035 guide-wire and without encountering any resistance. Thanks to the advantages of our catheter, the procedure time is shortening and opaque consumption reducing. However, the tips of JR catheter can friction to the aortic wall if it is rotated within the aorta without guidewire. This condition can cause complications [1,15].

The goal in this study is to demonstrate the success of a hand-made catheter on a carotid angiography. A comparative study of femoral S catheter with the Simon, HN4-5, CK1 and man catheters would have been much more demonstrative. However, in our Web-based scan, we could not find any studies showing that these catheters were successful in carotid angiography. Therefore, these catheters are suitable catheters those can be used in the carotid imaging with the femoral route

The author confirms that there are no known conflicts of interest associated with this publication and there has been no significant financial support for this work that could have influenced its outcome.

Copyright: ©2017 Balaban Y, et al. This is an open-access article distributed under the terms of the Creative Commons Attribution License, which permits unrestricted use, distribution, and reproduction in any medium, provided the original author and source are credited.