A Bibliography of Geological Studies on the Younger Granites Ring Complexes of Nigeria: 1951-2015

Copyright: © 2017 Aminu MD, et al. This is an open-access article distributed under the terms of the Creative Commons Attribution License, which permits unrestricted use, distribution, and reproduction in any medium, provided the original author and source are credited.

A bibliography of important geological studies on the Younger Granites Ring Complexes (YGRC) of Nigeria was conducted over a 64-year period: 1951-2015. The study presents a comprehensive list of primary sources of geological information on the study area which are both useful for present and future research. Based on the study, it was found that a total of 89 documents were produced and published on YGRC of Nigeria in various scientific journals around the world emphasizing different aspects of the geology of the study area. It was found that in the 26 years out of 64 years of study, no literature was published on the YGRC of Nigeria. The study also show that the foundational literature on the geology of the YGRC of Nigeria were conducted by British geologists and miners in the early part of the 20th century after the discovery of tin mineralization. Later studies were conducted by active participation of indigenous scientists from various universities and research organizations in Nigeria and Africa. Based on our findings, we categories the literature on the YGRC of Nigeria into three main groups—early, later and present day studies. Studies conducted in the early periods of geological research focused mainly on appraising and characterizing the geology, while later studies involved relatively more detailed scientific investigations using different geophysical and geochemical methods to aid in mineral exploration. In the present day, studies the literature has focused mainly on environment, geo-medicine, advanced geophysical analysis, satellite imagery for structural studies, Ta-Nb mineralization, etc.

The Younger Granite Ring Complexes (YGRC) in Figure 1 constitutes a major subdivision within the Basement Complex rocks of Nigeria [1-4]. There is sufficient information which indicates that the YGRC province has some of the best examples of granitic ring complexes in the world. The occurrence of these ring complexes was possible through a process of intense volcanism in Figure 2 which was characterized by the formation of rhyolites, tuffs, welded tuffs, ignimbrites, basalts and trachytes, and the emplacement of ring faulting through a process commonly referred to as cauldron subsidence [1]. The final volcanic episodes were characterized by elliptical and crescent shaped intrusions such as peralkaline and nonperalkaline granites, and minor amounts of syenites, anorthosites, porphyries, gabbro, hybrid rocks, etc., and equally ring dykes and cone sheets. Even though the younger granites intrusions often overlap each other, it is found that its emplacement follows a north-south trending order over a 1300-kilometre distance along Nigeria-Niger, and a NNESSW trending order over a 1000-kilometre distance stretching into the Cameroun province [5,6]. Ever since the publication of Hossain and Turaki [7], there has been no reliable bibliographic work on the YGRC of Nigeria. 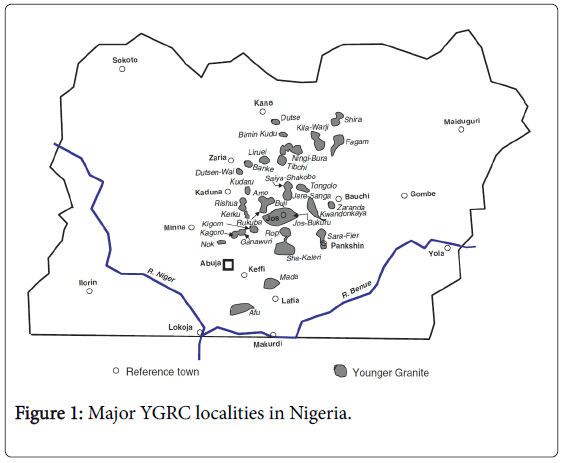 Figure 2: Schematic cross section showing stages in the development of the YGRC. a) A mass of granite (shaded) rises high into the crust (basement gneisses, migmatites and granites), supplied along ring fractures from below. Emplacement is accompanied by doming or swelling of the overlying crust and by initial subsidence of the underlying crustal block. Cone sheets (C) may be emplaced. Predominantly rhyolitic magmas are erupted, mainly as ignimbrites, from acute vents along the ring fracture and also from central vents. b) Rapid eruption of ignimbrites empties the magma chamber so that the overlying crustal cylinder breaks up and collapses into the resulting void, and there may also be further subsidence of the crustal block beneath. Early volcanics are down faulted into the surface calderas, which is filled by eruptions of later rhyolites in the form of both ignimbrites (dashes) and viscous lava masses (black). These are mainly supplied by magma rising along the ring fractures. Caldera subsidence continues during eruption of the rhyolites. c) Eruptions cease and the ring fractures are filled with granite porphyries to form marginal ring dykes (black). Emplacement of granites (crosses) occurs by subterranean cauldron subsidence: intermittent large-scale sinking of the roughly cylindrical crustal block beneath. The granites are emplaced into the upper crust, intruding and sometimes doming the earlier doming the earlier volcanics. The heavy broken lines indicate approximate upper and lower limits of present day levels seen in complexes in different places” [8].

Thus, in this study, we present a list of important research carried out on the YGRC of Nigeria from 1951 to 2015. The research highlights primary sources of literature, that is, papers published in journals indexed in some of the world’s most reputable abstract and citation databases for peer reviewed literature. The research conducted during this period varies from prospectivity for precious minerals to rare metal studies, cassiterite mineralization, tantalum-niobium-tin mineralization, and isotopic studies. This bibliography will useful in providing a comprehensive list of the most relevant primary source of information for future researchers interested in the geology of the YGRC of Nigeria.

Studies on the YGRC began in Nigeria with the discovery of tin by British geologists and miners in the early part of the 20th century [7]. Most of these studies were conducted by European researchers through overseas geological survey departments. More extensive literature was produced by the active participation of Nigerian geologists from various universities and research organizations, usually in collaboration with universities overseas, mostly in Europe and North America. Figure 3 presents a plot of number of studies produced during the period 1951-2015. 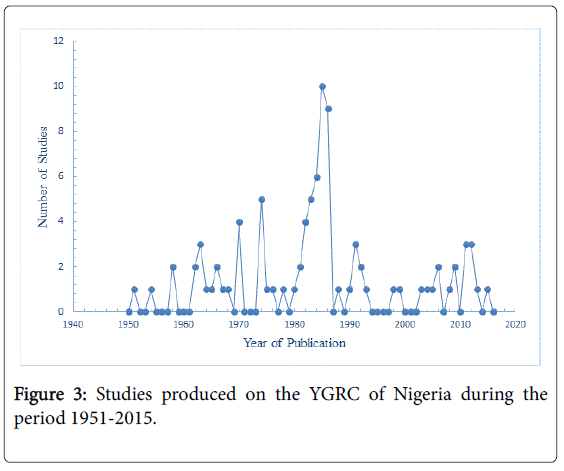 Based on our findings, a total of 89 documents were produced during the specified period of study. The years 1985 and 1986 recorded the most impressive production and publication of literature with 10 and 9 documents for each year respectively. From our data, in the 26 years out of a total of 64 years surveyed, there was no literature produced on the YGRC province of Nigeria.

In terms of the research areas explored, it can be said that the earliest studies on the YGRC of Nigeria focused mainly on its characterization in relation to similar rocks around the world, columbite and cassiterite mineralization, isotopic studies, trace element analysis, gravity interpretations, controls on mineralization, uranium, etc. Later geological studies focused mainly on chemical variations in biotite, bedrock geochemistry, aeromagnetic data interpretations, water quality, etc. Moreover, the present trends in geological research on the YGRC of Nigeria seem to be focused mainly on environmental problems of geometrical significance, granite cavities, structural trends and spectral depth analysis, structural studies using satellite imagery, and Ta-Nb mineralization.

A bibliography of geological studies on the YGRC of Nigeria was conducted for the periods 1951-2015. It is concluded that a total of 89 documents were produced and published in various peer reviewed journals around the world capturing different aspects of the geology of the study area. It was found that in the 26 years out of 64 years of study, no literature was published on the YGRC of Nigeria. Based on the findings of the present study, we categorize the literature on the YGRC of Nigeria into three main groups: early, later and present day. Studies conducted in the early periods of research mainly focused on understanding the geology of the YGRC, while later studies involved detailed geological investigations using various geochemical and geophysical techniques to decipher mineralization. In the present day, however, studies are mainly focused on aspects such as environment and geo-medicine, advanced geophysical analysis, satellite imagery, Ta- Nb mineralization, etc.