Basal Cell Carcinoma (BCC) is the most common malignant skin tumor. Its diagnosis is made on clinical grounds followed by confirmation on histopathology. Fine Needle Aspiration Cytology (FNAC) can be reliably used to evaluate skin tumors especially BCC. Here a case of recurrent BCC of skin successfully diagnosed through FNAC is reported.

Basal Cell Carcinoma (BCC) is the most common malignant skin tumor and is defined by the World Health Organization Committee on the skin tumors as “a locally invasive, slowly spreading rarely metastasizing tumor, arising in the epidermis” [1-5].

It is usually observed in older patients, especially in those frequently and excessively exposed to ultraviolet radiation during their lives [6].

The diagnosis of BCC is usually clinical, followed by microscopic confirmation of the lesion either through biopsy or surgical excision [7]. Although histology is the gold standard for diagnosing BCC, cutaneous cytology especially Fine-Needle Aspiration Cytology (FNAC) can also be successfully employed for diagnosing skin tumors, including BCC, due to simplicity of the procedure as well as easy staining techniques [8]. FNAC is a simple, quick, non-invasive procedure that can accurately confirm or exclude the diagnosis of malignancy. Most of the studies in literature have shown high sensitivity and specificity of FNAC for diagnosing BCC both during the initial workup as well as in cases of recurrence [9,10]. We report here a case of recurrent BCC of skin diagnosed on FNAC.

A 70 years old man presented in ENT OPD with pain and swelling on right side of nose and nasolabial fold for the past 3 months (Figure 1a). He was a diagnosed case of basal cell carcinoma involving right cheek and ala of nose and had undergone surgical resection followed by reconstruction and photodynamic therapy three years back. Histopathology of the resected lesion revealed basal cell carcinoma involving right cheek and right ala of nose with clearance of surgical resection margins. 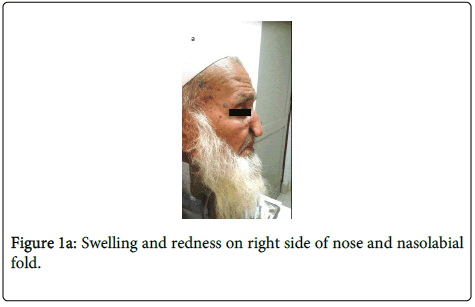 Figure 1a: Swelling and redness on right side of nose and nasolabial fold. 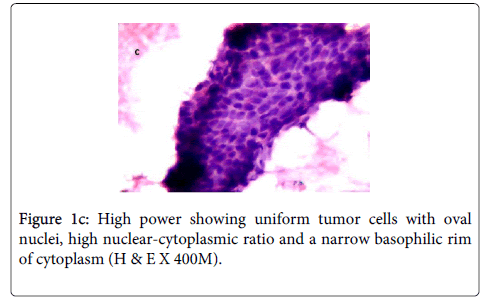 Keeping in view the clinical history, the morphological features were consistent with previously diagnosed basal cell carcinoma. Patient was later referred for CT scan of face and a reconstructive surgery was planned.

Basal cell carcinoma is a locally invasive, rarely metastasizing, common skin tumor [1-5]. Exposure to excessive sunlight is a major predisposing factor. Biopsy or surgical resection of the lesion with histopathological evaluation remains the mainstay for the diagnosis. However, FNAC can also be successfully employed for the diagnosis of BCC provided the yield is adequate and cytopathologist has expertise in interpreting skin lesions. The advantages of FNAC are that it is a quick and easy procedure to perform requiring minimum special equipment and little training. Limitations include inadequate yield, lack of experience by cytopathologist in interpreting skin tumors and failure to exactly assess variants of BCC.

The cytological features of BCC include 1) tightly cohesive cellular fragments, 2) small size of the tumor cells, 3) morphologically uniform tumor cells, 4) oval or fusiform and sometimes round nuclei with blurred chromatin structures, 5) high nuclear-cytoplasmic ratio with a narrow basophilic rim of cytoplasm, 6) nucleoli usually not evident and 7) some fragments with distinct sharp borders [11].

The high diagnostic accuracy of the cytology for BCC was first reported by Ruocco, in a study comprising of 500 cases [12]. Powell et al. performed a study on 82 skin tumors, and reported that the sensitivity and specificity of cytological examination in diagnosing BCC were 91% and 87%, respectively [13]. In a study done by Naraghi et al., the sensitivity and specificity of the cytology in identifying BCC variants were 87.3% and 95.3%, respectively [11]. Another study from south of Xinjiang on 22 cases of BCC skin revealed that there were no false-positive cases, but one false-negative due to inadequate sampling, giving a diagnostic accuracy of 95.65% [14]. In a recent study conducted by Kassi et al the sensitivity and specificity of fine-needle aspiration cytology for basal cell carcinoma were 94.3% and 100%, respectively [10].Thus, studies have confirmed that cytological examination of the smears obtained from the suspected BCC lesions can be a useful alternative method of diagnosis and can guide the dermatologist for subsequent confirmation by histopathology, thus expediting the treatment of the patient. Alternatively, in an already diagnosed case of BCC with suspected recurrence, FNAC can be used as a sole modality for confirming the diagnosis and initiating further appropriate management as was in this case.

In conclusion, FNAC is highly accurate, reliable, simple and very useful for diagnosing BCC. It can be performed in outpatient's clinics, thus saving both the time and cost in clinic and laboratory. This case report highlights the usefulness of FNAC in diagnosing BCC as an initial diagnostic tool as well as for confirming recurrence which can eventually be further confirmed by histopathology.

Copyright: © 2014 Moatasim A. This is an open-access article distributed under the terms of the Creative Commons Attribution License, which permits unrestricted use, distribution, and reproduction in any medium, provided the original author and source are credited.