A comparative study on performance in terms of transient time response specifications for position control of a separately excited DC Servomotor using Fuzzy logic control on PD strategy and general PD control strategy is done. Fuzzy Logic Controller (FLC) based on PD strategy is designed for both the inference mechanisms- Mamdani type and Takagi-Sugeno type. Robustness test for both the controllers-FLC and general PD controller has shown that Fuzzy Logic Controller is more robust as compared to general PD controller. All the work, experiments and simulation are done in MATLAB software.

The objective of this paper is to represent the comparative study of performance in terms of time response specifications of a PD-type FLC and a general PD controller. It has been seen that there are various advantages of the fuzzy logic controller over the general PD controller. Designing the Fuzzy Logic Controller [2] doesn’t require previous knowledge on system characteristic equation as PD controller. Fuzzy Logic Controllers, so called intelligent control function, represents much closely human thinking and natural language than logical control system used by PD control. The implementation of fuzzy logic control shows its robustness as the results in case of both simulation and experiment remain identical with respect to the load mass change [3].

This paper presents the performance of two types of fuzzy logic-based controllers- Takagi Sugeno based and Mamdani based. The main difference between Mamdani and Takagi-Sugeno is that the Sugeno output membership functions are either linear or constant. Also the difference lies in the consequents of their fuzzy rules, and thus their aggregation and defuzzification procedures differ suitably [10]. The number of the input fuzzy sets and fuzzy rules needed by the Sugeno fuzzy system depend on the number and extrema of the function to be approximated. In Takagi-Sugeno method a large number of fuzzy rules must be employed to approximate periodic or highly oscillatory functions. The minimal configuration of the Takagi-Sugeno fuzzy systems can be reduced and becomes smaller than that of the Mamdani systems if non trapezoidal and non-triangular fuzzy sets are used. Takagi-Sugeno controllers usually have far more adjustable parameters in the rule consequent and the number of the parameters grows exponentially with the number of input variables. Mamdani is easy to form compared to Takagi- Sugeno method [11].

Modelling of The Plant 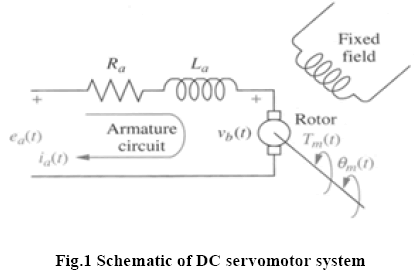 The electrical equation for DC servomotor system could simply be obtained based on the Kirchhoff’s Voltage Law as follows:

taking Laplace transform of the above

The electromechanical equation of the DC servomotor was related with the equivalent torque produced by the motor shaft is basically proportional to the multiplication of armature current with a motor torque constant, or

The transfer function for a third order armature controlled DC servomotor system is given as follows:

J= Total moment of inertia of the rotor together with that of reflected load on the rotor side,

B= Total viscous friction of the rotor together with that of reflected load on the rotor side,

In an armature controlled DC motor, the armature inductance is negligibly small compared to armature resistance, in that case the transfer function can be written as

The PD controllers involve two separate parameters proportional and derivative terms. The proportional term determines the reaction of current error and derivative value determines the reaction based on the rate at which error has been changing. The weighted sum of these two actions is used to control the process via the final control element [4]. Mathematical equation of the PD controller is shown below:

The fuzzy logic based controller (or Fuzzy Controller) was first implemented by Mamdani and Assilian [7] based on the fuzzy logic system generalized from fuzzy set theory introduced by Zadeh [8]. In contrast to conventional control techniques, fuzzy logic control is best utilized in complex ill-defined processes that can be controlled by a skilled human operator e.g. complex chemical plant without much knowledge of their underlying dynamics [9]. Generally, Fuzzy Logic Controller comprises of four principal components [2], [5], [10]:

The components of the Fuzzy Logic Controller can be clearly seen based in Figure 2 below: 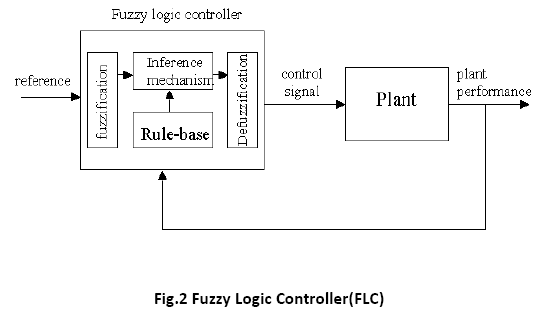 Here error and rate of change of error i.e. derivative of error are chosen as crisp inputs. Integral control action is not considered for selecting the crisp input of the fuzzy logic controller because of the fact that from the closed loop response it is found that improvement steady state specification is not much necessary.

For a PD like fuzzy controller, the rule base for both the inference mechanisms-Takagi-Sugeno type and Mamdani type FLC is same and presented in a tabular form known as Fuzzy Associative Memory (FAM) table. 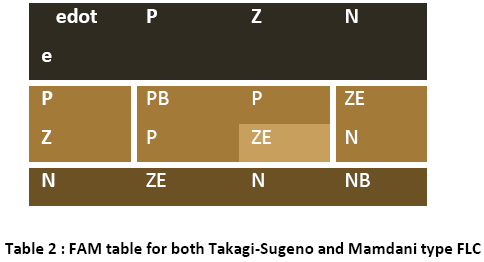 Table 2: FAM table for both Takagi-Sugeno and Mamdani type FLC.

It has been seen that 9 rules are needed to compute the rules for three membership functions of error and rate of change of error.

The following fuzzy subsets are used for the rate of change of error:

Figure 4: Membership functions for rate of change of error (edot).

It is to be noted that in the Takagi-Sugeno type inference mechanism [10],[20] the crisp output function u is given by, u = k f (x1,x2), where the function f (x1,x2) is a nonlinear function. For simplicity it is approximated by a linear function of the form f (x1,x2) = k0 + k1 x1 + k2 x2 where k0, k1, k2 are linear parameters. The parameters of the membership functions in the output are shown in the following table: 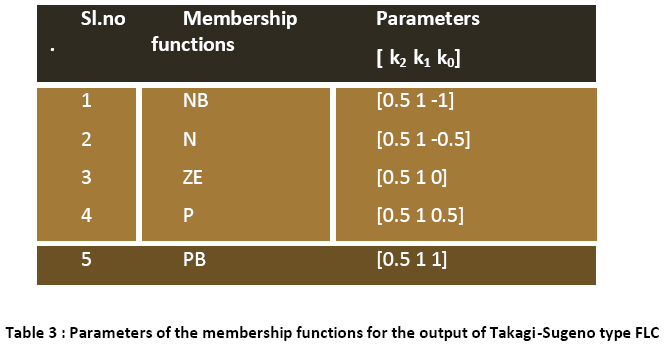 Table 3: Parameters of the membership functions for the output of Takagi-Sugeno type FLC.

It is noted that the DC term k0 in the membership function, ZE is set to 0, since no D.C. voltage is required to be applied to the armature of the servomotor when the error in position and rate of change of position are approaching zero value. Also, the sign of constant terms k0 for the output membership functions; it is negative for NB and N and positive for P and PB. Besides, the strengths of the co-efficients k1 and k2 in the parameters are symmetric in NB and PB, N and P. The numerical values of these co-efficients are chosen as a first trial and are tuned during simulation to improve the system performance.

The frame of Output is

The control surface for both types of controllers-Takagi Sugeno type and Mamdani type are shown in figure 6 and 7 respectively. 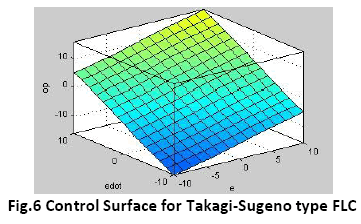 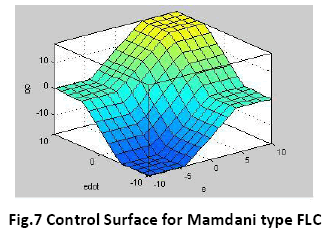 A comparative study of the transient performance between the General PD Controller and both FLC (Takagi- Sugeno and Mamdani) is simulated in MATLAB software. The robustness test of the General PD Controller and both FLC (Sugeno and Mamdani) is performed by changing the load i.e. the moment of inertia is multiplied by the factors of 0.5 and 2. The defuzzification method used for Takagi Sugeno based FLC and Mamdani based FLC are weighted sum method and centroid method respectively

So from equation (9), the transfer function for D.C servomotor becomes

A. Time Response of Servomotor Transfer Function for General PD Controller and both FLCs (Takagi-Sugeno and Mamdani type)

B. Robustness Test for General PD Controller and both FLCs (Sugeno and Mamdani type)

i) When the moment of inertia, J is multiplied by a factor of 0.5 :

ii) When the moment of inertia, J is multiplied by a factor of 2: 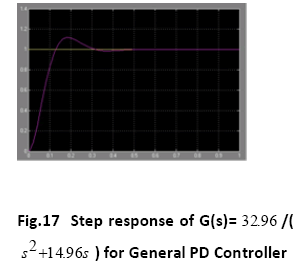 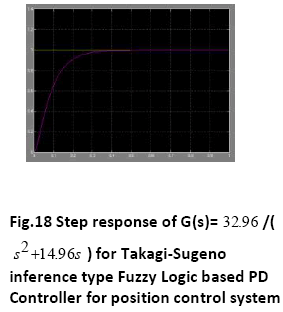 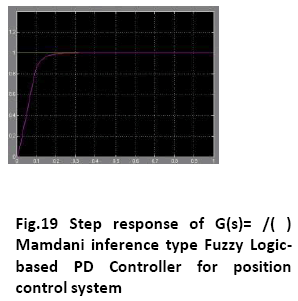 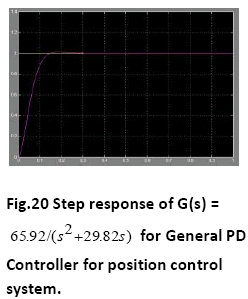 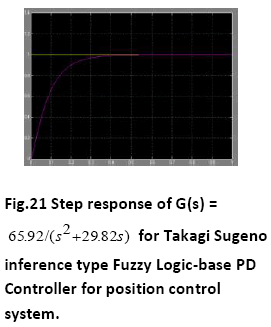 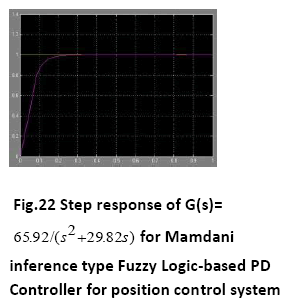 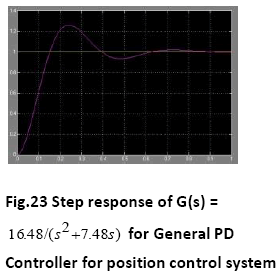 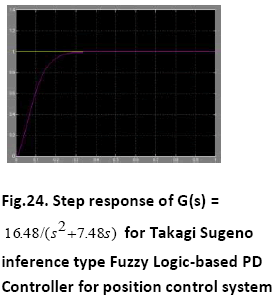 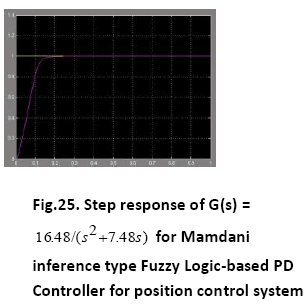 The Comparative performance assessment of both the controllers- General PD type and FLC (Takagi-Sugeno and Mamdani type) is summarised in Table 4: 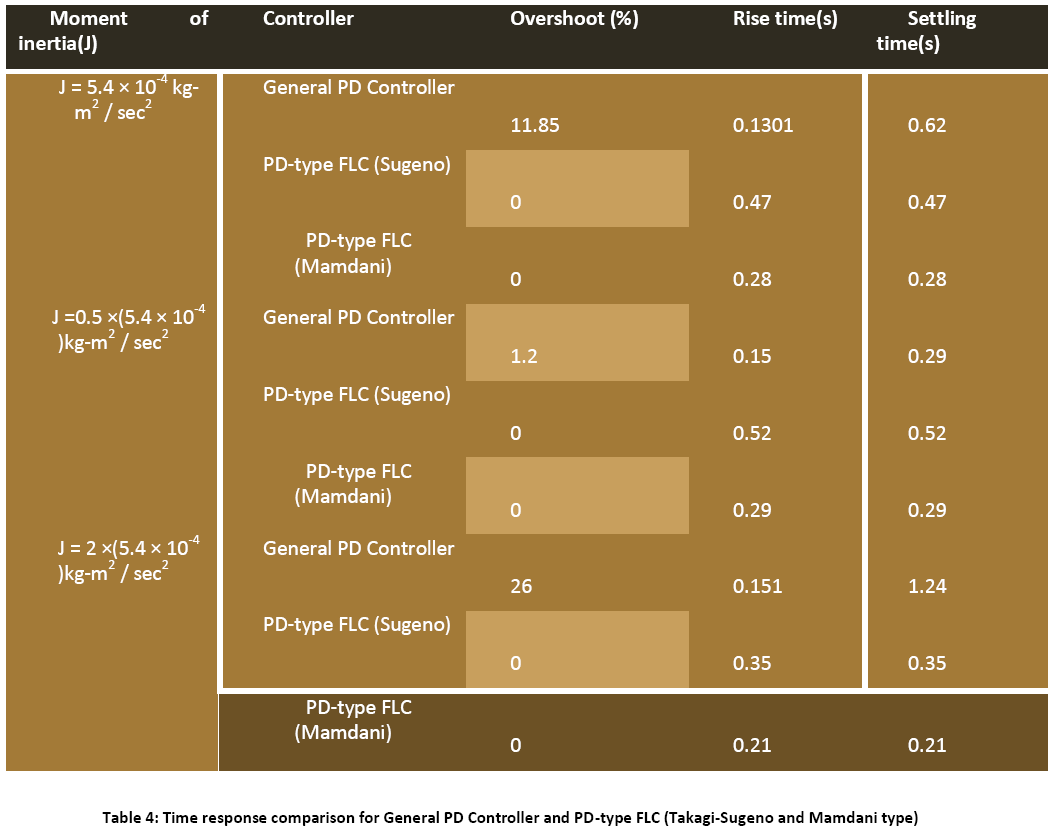 The Fuzzy logic controllers (Sugeno type and Mamdani type both) have shown good time responses for the servomotor as compared to general PD controller. The design for the Fuzzy logic inference system and ranges of membership functions have succeeded in getting critically damped like response for the servomotor. The fuzzy logic controllers (Takago-Sugeno and Mamdani type) are found to be more robust as compared to general PD controller. This is verified by considering the fuzzy logic controller tuned for one plant to a modified plant. As the servomotor is used for position control system like in robotic arm, it is used to pick some objects of varying masses. The fuzzy logic ontroller has been designed and tuned for an expected average mass of the object to meet prescribed overshoot imposition and settling time in transient response. Since the performance should not degrade too much even if the masses change over wide ranges. We simulate the situation by multiplying the moment of inertia J by a factor of 0.5 and 2. It has been seen that for both the fuzzy logic controllers, Takagi-Sugeno and Mamdani type, the overshoot is 0% and settling time is less than 1 second which is obtained when the parameter J is multiplied by a factor of 0.5 and 2. But the general PD controller shows considerable overshoot when the moment of inertia is multiplied by a factor of 0.5 and 2. Simulations are performed in MATLAB/SIMULINK environment.

This work can be tested with ANFIS (Adaptive Neuro Fuzzy Inference System) to optimize the performance while genetic algorithm can be used to tune the scaling gains of the fuzzy logic controller to get better time response in nonlinear application. Our future work will focus on designing fuzzy logic controller to get satisfactory time response to meet the hardware specifications of the servomotor.

The authors acknowledge the support from the ‘Control and Automation Centre (CAC)’ of Netaji Subhash Engineering College, Kolkata, India.