Ramaiah A1* and Madhava AS2

Copyright: © 2017 Abburi R. This is an open-access article distributed under the terms of the Creative Commons Attribution License, which permits unrestricted use, distribution, and reproduction in any medium, provided the original author and source are credited.

• Whether the repigmentation of vitiligo macules of non-sun exposed areas occur without sun exposure after its application.

• Whether it is effective to reduce wrinkles/fine lines on skin as indicated in earlier open ended trial. The vitiligo macules were selected on non-sun exposed areas of skin.

Methods: The multicenter study was carried out in patients (n=32) with stable non-segmental vitiligo that were selected by dermatologists. Two non-contiguous vitiligo macules on each patient which were non-sun exposed areas were selected for application of deca-peptide and vehicle control. The duration of treatment of volunteers was for 3 months starting with topical application of deca-peptide in vehicle on one macule of volunteers and vehicle control on the other macule of the same volunteers.

Results: The results demonstrated that decapeptide in vehicle group resulted in visible reduction of wrinkles and fine lines on the macules compared with the corresponding controls confirming the results of open ended trial on normal volunteers. The repigmentation of decapeptide in vehicle treated macules is about the same as the control vehicle treated macules.

Conclusions: The results demonstrated that the deca peptide lotion can be used as a cosmetic to reduce wrinkles/fine lines on skin. In absence of sun exposure, the topical application of decapeptide on the non-sun exposed vitiligo macules was not as effective to repigment as in the earlier conducted clinical trial where the sun exposed vitiligo macules were exposed to sun after its application.

Vitiligo is an acquired depigmentary disorder characterized by the patchy depigmentation of skin that may become progressive over time. It affects both sexes. Barring the loss of pigment, the depigmented patches are otherwise normal in all other respects except that they are disfiguring and cause the individual psychological trauma.

The etiology of vitiligo is still far from clear [1].

It has been postulated that the basic defect in vitiligo lies within the melanocytes [9]. Based on the studies of Puri et al. and Ramaiah et al. we hypothesized that growth factors for melanocytes like bFGF or other growth factors may be involved in repigmentation [10-14].

Other growth factors may also be involved in repigmentation [13,14].

We proposed that active peptides derived from bFGF could be potential therapeutic agents for managing vitiligo since bFGF or its active short peptides under in vitro conditions are mitogenic to melanocytes and stimulate melanogenesis [15,16].

Based on the above studies, clinical trials were conducted to study the efficacy and safety of the bFGFRP in India [20].

The bFGFRP was listed as deca peptide drug to treat vitiligo.

Topical application of bFGFRP followed many hours after with sun/UVA exposure was found effective in the earlier conducted clinical trials to treat non-segmental, segmental, PUV-A resistant and fast spreading vitiligo either by itself or in combination with PUV-A, or oral steroids. The deca peptide lotion is marketed in India since 2004 to treat vitiligo.

• Whether the repigmentation of vitiligo macules of non-sun exposed areas occur without sun exposure after its application.

• Whether decapeptide is effective to reduce wrinkles/fine lines on skin as indicated in earlier open ended clinical trial.

N-terminal is blocked with Para hydroxyl phenyl propionic acid to make it hydrophobic for better permeability in to the epidermis.

The molecular weight of the peptide with the N-terminal block is 1542.7Da. The peptide is acetate salt and contain four acetate residues.

Deca-peptide (0.1%) in the formulation after correction for 4 acetate residues was used in the study.

The recruitment period of volunteers was from April 2009-October 2009 but the duration of treatment of each volunteer is for 3 months starting from the time of topical application of deca-peptide.

The patients were recruited by four different centers with 32 subjects with peptide in vehicle or vehicle.

The four different centers were:

• Skin Clinic Leucoderma and Laser centre under the direction of Dr. Mukesh Girdhar.

Patients between 18 to 60 years of age with non-segmental stable vitiligo with disease duration of less than 5 years were included. Patients of Fitzpatrick skin type IV, V and VI were included.

Only those patients were recruited who had not received more than 12 consecutive NB-UVB sessions in the past 12 months with no previous exposure to decapeptide.

Stable vitiligo was defined as ≤ 10% increase in any lesion, no new significant macules and no progression of existing macules for ≥ 6 months.

Patients on systemic therapies in the last 2 months on topical therapy(s) e.g. steroids Class III or stronger, PUVA within 1 month were excluded. Patients with other medical issues, pregnant and lactating women were also excluded.

Each target depigmented macule (2 macules per patient) was randomized to receive either deca peptide in vehicle or vehicle alone. The patients, investigators and technical personnel were blinded to treatment assignments and only authorized staff could un-blind when essential via opening un-blinding envelopes.

The ethical committees of the chosen centers approved the trial and were conducted in accordance with the International Conference Harmonization (ICH) and the principles enunciated in the Declaration of Helsinki (Ethical Principles for Medical Research) involving Human subjects revised in 2008.

Subjects randomized to receive bFGFRP (cosmetic/drug) in vehicle on one target macule and vehicle on the corresponding paired macule in a blinded fashion six days per week for 12 weeks. Study cosmetic/ drug/vehicle was applied via finger cot by a trained study coordinator, investigator or sub investigator at the clinic.

Macule colorimetric changes were also considered programmatically using Canfield proprietary software. This method concurred with the investigator’s subjective assessment evaluation of target macules as well as that of the concerned patient. This was comparable to what Hamzvi et al. did [21].

The photographs were taken at base line, at periods of 2 weeks, 4 weeks, 8 and 12 weeks. Statistical analysis: paired t-test in the case of repigmentation.

Efficacy assessment of reduction of wrinkles

Reduction of wrinkles on skin/fine lines were assessed by simply looking at pictures at higher magnification for brighter and smoother looking skin of the bFGFRP applied areas compared to the corresponding controls.

The median age of patients was 30 years of whom 35.9% were females. Disposition of patients was summarized in (Figure 1). Thirty two [32] of 33 patients enrolled were included with one exclusion for lack of valid baseline data. 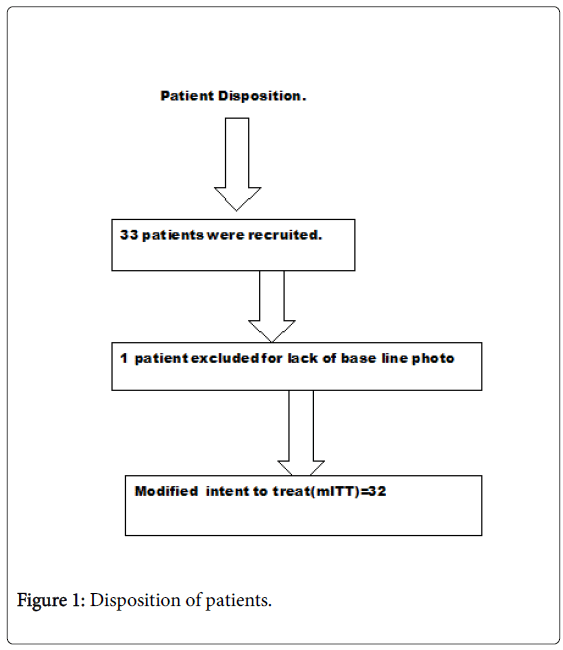 Modified intent to treat group (mITT) included all randomized subjects receiving topical bFGFRP and who had at least one post base line observation taken at 4, 8 and 12 weeks.

The areas measured for specificity described as threshold 1 method included only the white area of the macules as described in the 2nd picture in Figure 2. Figure 2: Measurements of repigmentation for high specificity and high sensitivity.

The areas measured for high sensitivity described as threshold 2 method included the area in the macule lighter in color than the color of the border of the macule along with white area of the macules as shown in picture 3 of Figure 2.

Both methods produced similar results. In this communication only the data obtained by thresh hold method 1 were presented.

The decrease/increase from base line macule area over time for macules treated with bFGFRP in vehicle or placebo (vehicle), were measured by threshold method 1 in this communication.

The macule location varied anywhere from trunk to arms, legs, hands and feet.

The mean area of macules repigmented in the group of patients treated with peptide in the vehicle was about the same as the mean area repigmented in the controls under present protocol conditions (P=5822 data not shown) in contrast to earlier observations where the macules treated with peptide about 10-12 hours later were exposed to sun/UV-A produced significant repigmentation [20].

However the bFGFRP applied areas looked brighter and smoother with reduction of wrinkles on the skin (Figures 3-6). Figure 3: Reduction of wrinkles/fine lines. A. location below umbilicus B. Medial aspect of right thigh. Figure 4: Reduction of wrinkles/fine lines. A. location back of right elbow B. back over media side of left shin. Figure 6: Reduction of wrinkles/fine lines. A. below right knee on front, B. above right knee back side.

In this double blind clinical trial, the vitiligo macules located on non-sun exposed areas of skin were deliberately selected to establish whether the topical application of bFGFRP on non-sun exposed macules repigment without the necessity of sun exposure.

The results indicated that repigmentation of vitiligo macules by topical application of bFGFRP under these conditions was not significantly different from that of the corresponding controls (P=0.5822).

Wrinkle reduction of skin by topical application of bFGFRP

During the earlier open ended clinical trial with bFGFRP to treat vitiligo macules, it was observed that the bFGFRP applied areas of skin looked smoother with reduced wrinkles [22]. Based on this observation, an open ended clinical trial was conducted on 20 normal volunteers to find the effect of topical application of bFGFR on dorsal left hand and the vehicle on the right dorsal hand [22]. The bFGFRP applied dorsal hand showed decreased wrinkles compared to the control [22]. In the present double blind clinical trial, the earlier observation, that bFGFRP reduces wrinkles on skin was confirmed as shown in Figures 3-6.

The reduction of wrinkles on skin by the topical application of the bFGFRP described above may be due to increased cellularity of the epidermis since bFGFRP is agonist peptide of bFGF and acts as a mitogen both for melanocytes and fibroblasts [22]. In addition, the increased number of fibroblasts may also increase amount of collagen in skin thus contributing to the reduction of wrinkles on skin.

Thus, bFGFRP lotion could be used as a cosmetic also to reduce wrinkles on skin both in western Caucasian and colored population of the world. Topical application bFGFRP in a vehicle on the Caucasian population may result not only smoother skin but also a desirable tan in view of increased pigmentation. The undesirable pigmentation that results by the topical application of bFGFRP in vehicle on coloured population could be avoided by including UVA/UVB sunscreen products in the vehicle with bFGFRP.

Thus, for purposes of wrinkle prevention, the combination of the bFGFRP along with a UVA and/or UVB sunscreen in a safe acceptable formulation would be most successful. Such a cosmetic formulation prevents photo damage induced wrinkle formation and at the same time hyperpigmentation, lentigos and uneven skin tone.

bFGFRP to be very effective repigmenting agent in vitiligo requires after its application exposure of the macules to sun/UVA/UVB radiation. bFGFRP in a suitable formulation with a high sun protection factor acts as a cosmetic to reduce wrinkles on skin and corrects other photo damage related events.

The authors thank the volunteers for their participation and Kythera Biopharmaceuticals Inc a venture capital company with no sales of pharma products, Los Angeles USA for financing this study but the authors are responsible for the opinions expressed in this article.