Biometric Authentication is a system which deals with the physiological as well as behavioural characteristics of a person. Palm vein structure is unique for every human being even for the twins also. In this paper, firstly we made a comparison study among all different biometric authentication processes that are already been used presently. Secondly, we propose an Image Analysis technique for Vascular Pattern of Hand Palm, which in turn leads towards Palm Vein Authentication of an individual. A Near-Infrared Image of Palm Vein pattern is taken and passed through three different processes or algorithms to process the Infrared Image in such a way that the future authentication can be done more accurately. As an input a near-inferred image of palm vein pattern is taken and it is passed through different processes to implement authentication of an individual. The different processes are (i) Vascular Pattern Pointer Algorithm (VPPA), (ii) Vascular Pattern G-B Conversion Algorithm (VPGBCA) and (iii) Vascular Pattern Thinner Algorithm (VPTA). During first process a near-infrared image is converted into a grayscale image. In the second process the grayscale image is again converted into a binary image. Lastly, the processed binary image is finely thinned to get a proper thinned image. This VPTA process gives an edge to enrich the level of security of perfect biometric authentication to maximum level.

Authentication is a process by which a system verifies the identity of a user who wishes to access it. Since Access Control is normally based on the identity of the User who requests access to a resource, authentication is essential to effective security. The process of identifying an individual usually based on a username and password [1]. In security systems, authentication is distinct from authorization, which is the process of giving individuals access to system objects based on their identity. Authentication merely ensures that the individual is who he or she claims to be, but says nothing about the access rights of the individual. Authentication may be implemented using Credentials, each of which is composed of a User ID and Password. Moreover, Authentication may be implemented with Smart Cards [2], an Authentication Server or even a Public Key Infrastructure. Users are frequently assigned (with or without their knowledge) Tickets, which are used to track their Authentication state. This helps various systems manage access control without frequently asking for new authentication information. The combination of authentication server and authenticator, which may be separate devices or both reside in the same unit such as an access point or network access server. The authentication server contains a database of user names, passwords and policies and the authenticator physically allows or blocks access. In a verification application, the authentication system requires input from the user, at which time the user claims his identity via a password, token, or user name (or any combination of the three). This user input points the system to a stored data in the database. The system also requires a sample from the user. It then compares the sample to or against the user-defined data. This is called a “one-to-one” search (1:1). The system will either find or fail to find a match between the two as describes in Figure 1. 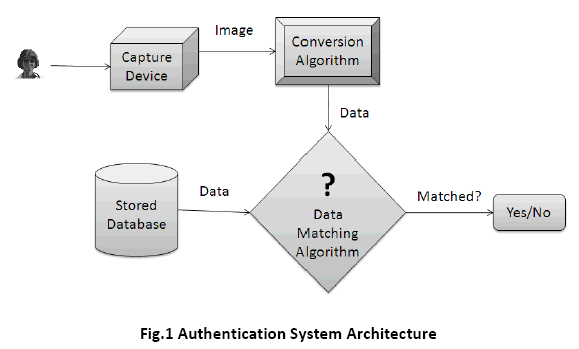 a. Something we have – card, token, key.

b. Something we know-PIN, P/W.

c. Something we are – a biometric.

Biometric recognition or simply biometrics refers to the automatic recognition of individuals based on their physiological and/or behavioural characteristics. By using biometrics, it is possible to confirm or establish an individual’s identity based on “who she is”, rather than by “what she possesses” (e.g., an Smart Card) or “what she remembers” (e.g., a pin). What biological measurements qualify to be a biometric? Any human physiological and/or behavioural characteristic can be used as a biometric characteristic as long as it satisfies the following requirements:

(A) Universality: Each person should have the characteristic.

(B) Distinctiveness: Any two persons should be sufficiently different in terms of the characteristic.

(C) Permanence: The characteristic should be sufficiently invariant (with respect to the matching criterion) over a period of time.

(D) Collectability: The characteristic can be measured quantitatively.

Biometric authentication [3] requires comparing a registered or enrolled biometric sample (biometric template or identifier) against a newly captured biometric sample (for example, a fingerprint captured during a login). During Enrolment, as shown in the Figure 2, a sample of the biometric trait is captured, processed by a computer and stored for later comparison. Biometric recognition can be used in identification mode, where the biometric system identifies a person from the entire enrolled population by searching a database for a match based solely on the biometric. For example, an entire database can be searched to verify a person has not applied for entitlement benefits under two different names. This is sometimes called “one-to-many” matching. A system can also be used in Verification Mode, where the biometric system authenticates a person’s claimed identity from their previously enrolled pattern. This is also called “one-to-one” matching. However, in a practical biometric system (i.e., a system that employs biometrics for personal recognition), there are a number of other issues that should be considered, including:

(b) Acceptability: Which indicates the extent to which people are willing to accept the use of a particular biometric identifier (characteristic) in their daily lives.

(c) Circumvention: Which reflects how easily the system can be fooled using fraudulent methods.

In today’s era the different types of biometric authentication available to us as follows:

(A) Fingerprints Recognition System: Fingerprint verification or fingerprint authentication refers to the automated method of verifying a match between two human fingerprints [4]. Fingerprints are one to many forms of biometrics used to identify individuals and verify their identity.

(B) Face Recognition System: A facial recognition system is a computer application for automatically identifying or verifying a person from a digital image or a video frame from a video source. One of the ways to do this is by comparing selected facial features from the image and a facial database [5].

(C) Iris Recognition System: Iris recognition is an automated method of biometric identification [6] that uses mathematical pattern-recognition techniques on video images of the iris of an individual’s eyes, whose complex random patterns are unique and can be seen from some distance [7].

(D)Retinal Scan Recognition System: Retina recognition technology captures and analyses the patterns of blood vessels on the thin nerve on the back of the eyeball that processes light entering through the pupil [8].

(E)Voice Recognition System: It combines physiological and behavioural factors to produce speech patterns that can be captured by speech processing technology [9]. Inherent properties of the speaker like fundamental frequency, nasal tone, cadence, inflection, etc. are used for speech authentication [10].

(F) Hand Geometry Recognition System: It is a system which measures either physical characteristics of the fingers or the hands. These include length, width, thickness and surface area of the hand [11]. One interesting characteristic is that some systems require a small biometric sample (a few bytes). Hand geometry has gained acceptance in a range of applications. It can frequently be found in physical access control in commercial and residential applications, in time and attendance systems and in general personal authentication applications [12]. 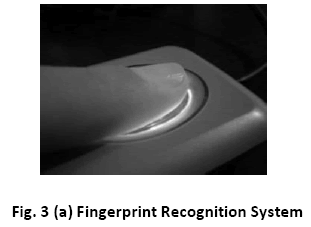 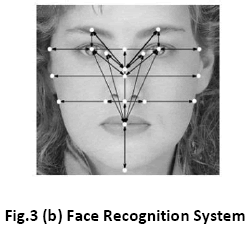 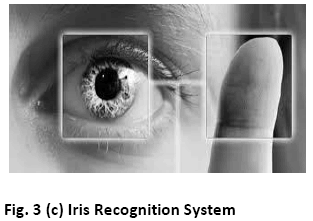 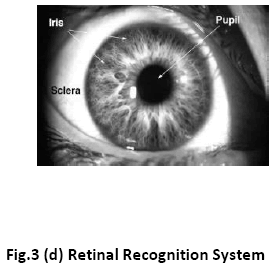 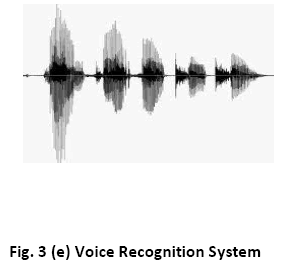 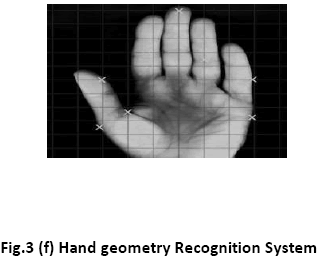 In Biometric Authentication Methodologies now a day’s several Biometric Authentication System is being used for the security measures. In our paper, Palm Vein Authentication Systems is used as it is a much secured method of Authentication because the blood vein pattern lies under the human skin. This is the latest technology used for safety measures as per as Biometric Authentication is concerned. The pattern of blood veins is unique to every individual. Palms have a broad and complicated vascular pattern and thus contain a significant amount of differentiating features for personal biometric identification. In addition with, the latest palm vein technology becomes the most secured one as it will also not vary during the person’s lifetime. According to the Fujitsu Whitepaper, June 2005, haemoglobin in the blood is oxygenated in the lungs and carries oxygen to the tissues of the body through the arteries [13]. After it releases its oxygen to the tissues, the deoxidized haemoglobin returns to the heart through the veins. These two types of haemoglobin have different rates of absorbency. Deoxidized haemoglobin absorbs light at a wavelength of about 760 nm in the near-infrared region. When the Palm of the hand is illuminated with near-infrared light, unlike the image seen by the human eye, the deoxidized haemoglobin in the hand veins absorbs this light, thereby reducing the reflection rate and causing the veins to appear as a black pattern (Figure 6). In vein authentication based on this principle, the region used for authentication is photographed with near-infrared light, and the vein pattern is extracted by image processing and registered. The vein pattern of the person being authenticated is then verified against the pre-registered pattern. In this paper we have used 512x512 – M2-PV Reader to capture near-infrared images of palm vein [14]. Here we propose three steps for proper Palm Vein Authentication process. The steps are discussed as follows:

i. Open an Infrared Palm Image File in input mode.

iii. The operator consists of a pair of 3×3 convolution kernels as shown in Figure 4. One kernel is simply the other rotated by 90°.

These kernels are designed to respond maximally to edges running vertically and horizontally relative to the pixel grid, one kernel for each of the two perpendicular orientations. The kernels can be applied separately to the input image, to produce separate measurements of the gradient component in each orientation (call these Gx and Gy). These can then be combined together to find the absolute magnitude of the gradient at each point and the orientation of that gradient. The gradient magnitude is given by:

This is much faster to compute. The angle of orientation of the edge (relative to the pixel grid) giving rise to the spatial gradient is given by:

A digital grayscale image can be represented as a matrix of corresponding pixel values. A pixel is a small block that represents the amount of gray intensity to be displayed for that particular portion of the image. For most integers the pixel integers values range from 0 (Black) to 255 (White) [15]. The 256 possible gray intensity values are shown in Figure 5.

The proposed following algorithm is used for converting the ‘bin.jpeg’ into the ‘thin.jpeg’. This ‘thin.jpeg’ file provides us a thinned vascular pattern which in turn could be very fruitful for enhancing the ultimate accuracy. 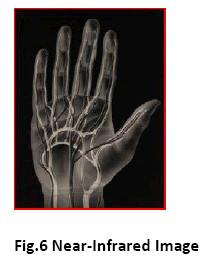 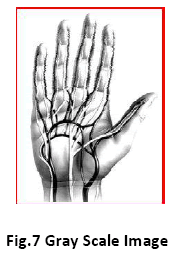 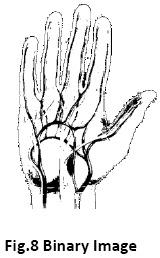 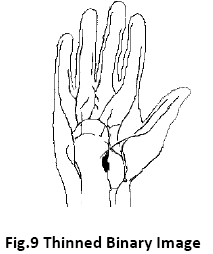 In this paper three different algorithms for processing palm vein pattern image are proposed. The algorithms have been implemented and also provide satisfactory results. Most importantly as our Vascular Pattern Thinner Algorithm is well programmed, tested & synthesized, therefore this can definitely give an edge towards more secure biometric authentication.

This project can be extended by matching the thinned binary images of vascular pattern of hand palm of an individual with the thinned images that are previously stored vascular pattern of hand palm image database. Moreover, this project can be applicable in different security systems such as physical admission into secured areas, log in control, ID verification in health care services, electronic record management, secure ATM accessibilities in financial services etc.