A Picture Paints a Thousand Words

Department of Gastroenterology, Our Lady of Lourdes, Drogheda, Ireland

Copyright: © 2014 Christopher B, et al. This is an open-access article distributed under the terms of the Creative Commons Attribution License, which permits unrestricted use, distribution, and reproduction in any medium, provided the original author and source are credited.

A 56 year old woman was referred by her general practitioner with ongoing malaise. She had a history of recurrent epistaxis. On examination, there was extensive mucocutaneous telangiectasia (Figure 1). Her father and brother have a history of epistaxis and facial telangiectasia. Her presenting haemoglobin was 6.6 g/dl (normal, 13.0-18.0 g/dl), microcytic picture and ferritin of 3 ng/ml (normal, 22-274 ng/ml). She was transfused with packed red cells. 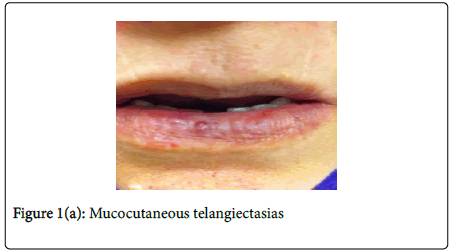 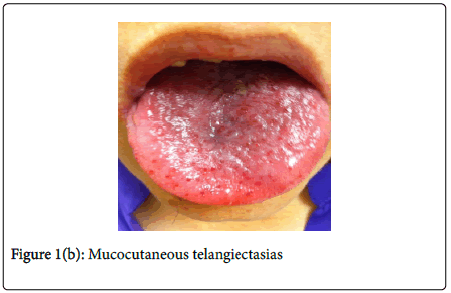 Push enteroscopy revealed multiple gastrointestinal telangiectasia. These were successfully coagulated with bipolar electrocoagulation (Gold Probe; Microvasive BostonScientific, Natick, MA) (Figure 2). Ileocolonoscopy was normal. She was discharged on oral iron. A diagnosis of hereditary hemorrhagic telangiectasia (HHT) [1-3] was made based on epistaxis history, family history and presence of mucocutaneous telangiectasias. HHT also known as Osler-Weber-Rendu syndrome is an autosomal dominant disorder. Patients may present with epistaxis or gastrointestinal bleeding with characteristic mucocutaneous telangiectasia on mucosal surfaces. Arteriovenous malformations (AVM’s) can be present in lung (50%), hepatic (30%) and cerebral circulations (10%). Pulmonary AVM’s may lead to paradoxical embolic stroke and brain abscess. Large hepatic AVM’s may cause anaemia and cardiac failure1. Cerebral AVMs are usually silent and multiple2. Headaches and seizures may occur due to ischaemia or haemorrhage. The prevalence is between 1: 5000 and 1: 80003.

By age 16, 70% manifest signs rising to 90% at age 40. The international consensus diagnostic criteria (Curacao criteria) are based on findings below:-

The diagnosis of HHT is definite when three or all of the above criteria are met. If two are met, the diagnosis is suspected. The treatment is individualised, supportive, and depending on the viscera affected. Mortality and morbidity is directly linked to the extent of visceral involvement.