A Rare Case of Prostatic Extra Gonadal Germ Cell Tumor in a Young Adult: Review of the Literature

Copyright: © 2014 Sydris S, et al. This is an open-access article distributed under the terms of the Creative Commons Attribution License, which permits unrestricted use, distribution, and reproduction in any medium, provided the original author and source are credited.

We report the case of a 29 year-old male who presented with hemospermia. A biopsy revealed an embryonal rhabdomyosarcoma of the prostate and the patient was treated with pre-operative chemotherapy according to the pediatric protocol IVAD (Ifosfamide - Actinomycin - Doxorubicin – Vincristine) followed by prostatectomy. Pathologic examination of the prostate showed the persistence of an immature teratoma without residual rhabdomyosarcoma. The choice of consolidation chemotherapy with a platinum-based regimen was based on the diagnosis of an extra-gonadal non-seminomatous germ cell tumor with an excellent clinical outcome. Extragonadal germ cell tumors of the prostate in adults are very rare and aggressive. The presence of a sarcomatous component represents a poor prognostic factor and it may pose diagnostic pitfalls just like in the case we report. Early diagnosis and multimodality treatment are necessary to improve overall survival.

Extragonadal germ cell tumors (EGCT) are rare tumors that predominantly affect young males. EGCT of the prostate are even more rare. Less than 20 cases have been described in the medical literature and most reports describe the high aggressiveness of this disease. What is interesting is the fact that the biopsy revealed first the sarcomatous component of the tumour and not its real nature. The patient responded to its initial treatment even though it was originally given for treating a sarcoma and not a germ cell tumour. The treatment has been adequately adapted after final histological diagnosis. The choice of a polychemotherapy regimen targeting an embryonal rhabdomyosarcoma rather than a classical regimen for germ cell tumor, could explain the good clinical outcome in our patient.

A 29 year-old male patient presented to our care with hemospermia. Past medical and surgical history was negative for any significant illness, trauma, allergy or high risk behavior.

Digital rectal examination revealed a large prostatic tumor whereas palpation of the testes was normal. Trans-rectal ultrasound confirmed the presence of the tumor and showed a heterogeneous aspect of the parenchyma of the prostate. No laboratory evidence of underlying infection was found. Even though several blood and urine cultures turned out to be sterile, the patient was treated with ofloxacin and non-steroidal anti-inflammatory drugs for one week without any clinical benefit. Prostate specific antigen (PSA) and carcino-embryonic antigen (CEA) were normal. Germ cell tumor markers such as human chorionic gonadotropine (beta-hCG), alpha-fetoproteine (AFP) and lactate dehydrogenase (LDH) were also within normal limits. Magnetic resonance imaging (MRI) and positron emission tomography (PET) confirmed the presence of a 4x4.5 cm heterogeneous and hypermetabolic tumor confined to the prostatic gland (Figures 1 and 2). A single hypermetabolic para-aortic lymph node was shown by PET imaging but was not confirmed by MRI. Both imaging modalities showed thickening of the bladder wall in contact with the prostate. There was no evidence of distant lymph node involvement or metastatic disease. Tru-cut biopsy was performed. Combined morphology and immunohistochemistry suggested the diagnosis of embryonal rhabdomyosarcoma (Figure 3: positive immunostain for desmin and negative immunostain for smooth muscle actin). 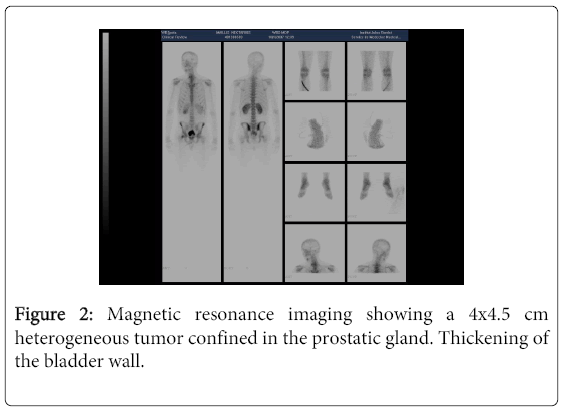 Based on the histology and on the hypothesis of lymph node involvement, the patient was treated with four courses of upfront chemotherapy (Ifosfamide - Actinomycin - Doxorubicin – Vincristine). prostatectomy was then performed. Pathologic examination of the prostate showed the persistence of an immature teratoma without residual rhabdomyosarcoma (Figure 4). The discordance between the initial biopsy that showed an embryonal rhabdomyosarcoma and the final pathologic examination of the surgical specimen that revealed an immature teratoma could be explained by the limitation of a tru-cut biopsy that could not capture the heterogeneity of a teratoma with a sarcomatous component. Absence of the sarcomatous component reflects response of this histology to the administered chemotherapy. None of the 18 resected lymph nodes was invaded by malignant cells. The surgical margins were clear. Post-operative consolidation chemotherapy was administered without Vincristine because of peripheral neuropathy and with the addition of platinum salts after the final pathology report yielded germ-cell tumor. No adjuvant radiation therapy was undertaken. Chemotherapy was complicated by several episodes of febrile neutropenia. The patient suffered from sexual impotence requiring a penile prosthesis.

The patient has been in follow-up for more than four years and is seen on a regular basis as an outpatient at the Medical Oncology Clinic. He is still considered in complete remission.

Extragonadal germ cell tumors (EGCT) are rare tumors that predominantly affect young males. EGCT of the prostate are even more rare. Less than 20 cases have been described in the medical literature and most reports describe the high aggressiveness of this disease [1]. The presence of a sarcomatous component within an extragonadal germ cell tumor is an even more infrequent phenomenon with a clinical outcome and biologic significance that remain undefined [2]. A chemotherapy induced sarcomatous transformation in a teratoma has also been described.

The pathogenesis of EGCT is unclear. Several hypotheses have been suggested but two most frequently cited: the malignant transformation of mesenchymal cells present within teratomas; and the presence of ectopic gonadal tissue formed by sequestrated gonadal cells during their migration from the yolk sac to the gonadal region [3]. Many tumors were associated with teratomatous elements supporting the genesis of sarcoma from malignant transformation of mesenchymal cells within the teratoma. The only suggested risk factor for extragonadal germ cell tumors (EGCTs) is Kleinefelter syndrome (47XXY), which is associated with mediastinal nonseminomatous germ cell tumors [4].

Preoperative diagnosis of prostatic EGCT is difficult because of the non specific urinary tract symptoms: dysuria, signs of urinary tract infection or hemospermia. Digital rectal examination helps revealing an enlargement of the prostate that is then confirmed by a trans-rectal ultrasound. Magnetic resonance imaging of the pelvis permits an accurate assessment of the locoregional extension of local tumor.

The natural history of extragonadal germ cell tumors is characterized by rapid progression with pulmonary, liver and bone metastases. Regional lymph node metastases are also common. Prognosis is poor without treatment, particularly in the presence of distant metastases. Early diagnosis and treatment by radical surgery and chemotherapy are essential to improve the prognosis. The regimen consisting of vincristine, adriamycine and cyclophosphamide or ifosfamide is usually used for embryonal rhabdomyosarcoma and the cisplatin-based regimen (in association with bleomycin and etoposide) is used for most of the subtypes of extra gonadal germ cell tumors. Radiation therapy can be proposed depending on the type and the stage of the cancer.

The histological subtype of extragonadal germ cell tumors harboring a sarcomatous component, the presence of distant metastases and the mediastinal site of the primary tumor seem to be poor prognostic factors for survival [5]. The presence of a sarcomatous component in extra gonadal germ cell tumors may pose diagnostic pitfalls when the SC overshadows the germ cell tumor elements  just like in the case we report. Moreover it may also be the cause of treatment failure since the regimens used in germ cell tumors are not the same as the ones used in sarcoma. It is clear that metastatic disease could complicate the assessment of response to treatment, especially if we consider that metastases could occur from each different component of the primary tumor. In our case, the sarcomatous component of the primary tumor responded to the pre-operative chemotherapy with Ifosfamide - Actinomycin - Doxorubicin – Vincristine. The post-operative chemotherapy has been modified to a cisplatin-based regimen in order to target the extra gonadal non seminomatous germ cell tumor and to avoid cumulative toxicity of long term doxorubicin and vincristine administration. The choice of a polychemotherapy regimen targeting an embryonal rhabdomyosarcoma rather than a classical regimen for germ cell tumor, could explain the good clinical outcome in our patient.

A primary extra gonadal germ cell tumor arising from the prostate is an unusual malignant tumor with rapid growth and progression.

Extragonadal germ cell histology with a sarcomatous component, the presence of distant metastases and the mediastinal site of the primary tumor seem to be poor prognostic factors in terms of survival.

The choice of a polychemotherapy regimen targeting an embryonal rhabdomyosarcoma rather than a classical regimen for germ cell tumor, could explain the good clinical outcome in our patient.

Early diagnosis and multimodality treatment are necessary in order to improve the prognosis.