Lately the use of a surveillance system for image detection is becoming more important. An embedded surveillance system is frequently used in the home, office or factory [1] for image processing of the surveillance system [2], and also for traffic monitoring [3-4], but this configuration requires a high performance core, which works against some advantages of embedded systems, such as low power consumption and low cost. Some designs propose the use of different sensors to track the sequence of the human body movement [5]. Other researchers construct an external signal to trigger the embedded surveillance system by means of a PIR sensor, which is triggered when an intruder enters the monitoring area [6]. However, a PIR sensor has a high miss rate when the intruder walks at a slow speed. Hence, to solve this problem, we use ultrasonic sensors to implement an embedded industrial surveillance system. In addition, because a single receiver can be influenced by refraction and reflection, we use several sensors to receive the ultrasonic transmissions in order to enhance the reliability of the system.

We extend some of the theory and application of the MVM, such as those relating to the enhancement of speech recognition probability by MVM [7]. The MVM determines the voting result of multiple sensors of an ultrasonic receiver, and the embedded industrial surveillance system starts the Web camera to start video streaming of the monitoring area. The objective of this paper is to design and implement a web-camera based remote surveillance system for remote monitoring. This surveillance system enables users to monitor their personal properties or household safety during the period when users are away from home or industry, either they are in the office or going for vacation. Users can access to their monitoring system remotely via the internet using Windows-based Remote Desktop program from a personal computer. 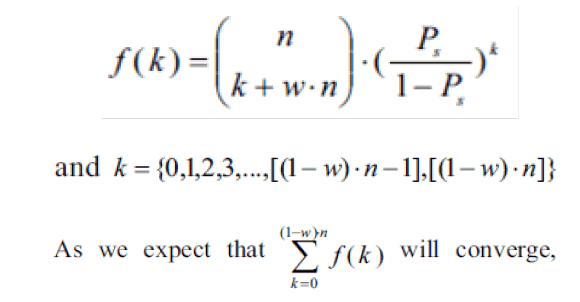 We need to determine whether f (k) is a decreasing function. From the ratio test for the convergence function we learn that increasing the n value decreases the ratio gradually for each f (k). The relationship is as follows. In this surveillance system, a web-camera is attached to a rotating platform that can rotate to all four directions. When the ultrasonic sensor detects intruder, the web-camera activated and rotating platform rotates to the detected direction. Subsequently, web camera starts recording video of the monitored area and save it into memory storage for future retrieval and analysis.

There are two main software programs in this project. The first one is PC-based Graphic User Interface (GUI) application software for web-camera to capture video of the monitored area. The other one is the device-based program for micro-controller to handle the behavior of the sensors, stepper motor and web-camera. In order to improve effectiveness of the memory storage and cost saving purpose, the program for micro-controller is programmed in the way that it will send a signal to the PC when intruder detected by motion sensor. The web-camera will only start up and capture the video of the scene when GUI program receives an “activated” signal from micro-controller. The camera will be in idle mode for the rest of the time. By doing so, the cost of memory storage and power consumption can be reduced. The program of the MVM contains a detection of the GPIO function, a counting and majority vote function, an image capture function and a Web server, as shown in Fig. 4. 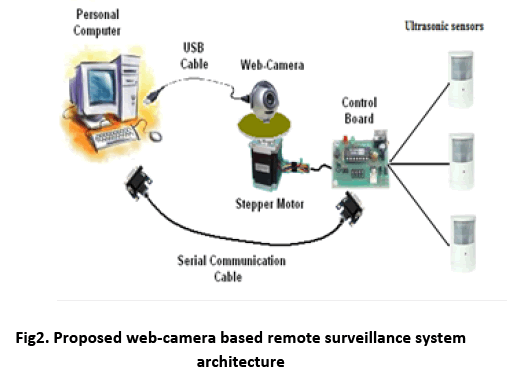 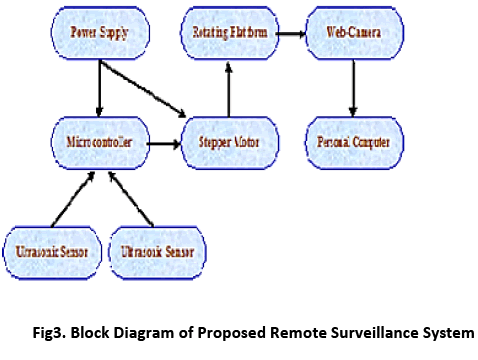 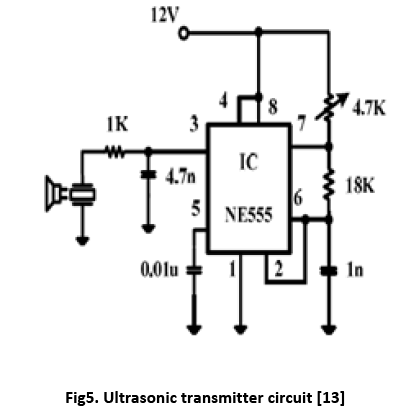 In the experimental results, according to the specification of the components, we found that if the ultrasonic sensing distance is more than 6 meters, and if we give the transmitter the same direction as the sensing direction of the receiver, the ultrasonic transmission will be blocked when an intruder enters the transmission path of the sensing area. As decided by the MVM, our design detects the intruder and turns the Web camera on. The scattering angle of the ultrasonic sensors is very large with a fast scattering attenuation rate. Therefore, because of our observations at different distances and with perpendicular directions, the receiver is adjusted to within 100 cm of the scattering distribution. The transmitter is aligned with the direction of the receiver. Table 1 shows the primary results of our experiments. As we are increasing the sensing distance the sensing probability goes on decreasing. Table 2 shows a comparison of the measurement results of our design with products A and B, comprising reliability, Resolution, power consumption and response time.