A Review on the Handoff Effect in VoIP Systems

The popularity of wireless communication is increasing quite rapidly throughout the world after the introduction of cellular and broadband technologies. The real potential of broadband wireless networks lies with mobility .Mobility is the most important feature of a wireless cellular communication system. Usually, continuous service is achieved by supporting handoff (or handover) from one cell to another. Handoff is the process of changing the channel (frequency, time slot spreading code, or combination of them) associated with the current connection while a call is in progress. It is often initiated either by crossing a cell boundary or by deterioration in quality of the signal in the current channel. This paper is a review on the handoff issues that usually occur in wireless systems.

The Internet is evolving into a universal communication network and it is contemplated that it will carry all types of traffic, including voice, video and data. Among them, telephony is an application of great importance, particularly because of the significant revenue it can generate. In order for the Internet to constitute an attractive alternative to the traditional Public Switched Telephone Network (PSTN), it must provide high quality “Voice over IP” (VoIP) services [1].

Voice over IP (VOIP) uses the Internet Protocol (IP) to transmit voice as packets over an IP network. So VOIP can be achieved on any data network that uses IP, like Internet, Intranets and Local Area Networks (LAN). Here the voice signal is digitized, compressed and converted to IP packets and then transmitted over the IP network. Some of the motivations behind VoIP are:

iii. Demand for integration of voice and data networks [2].

IEEE 802.11- based wireless LANs have seen a very fast growth in the last few years and Voice over IP (VoIP) is one of the most promising services to be used in mobile devices over wireless networks [3].

These days a massive deployment of VoIP is taking place over data networks. Many network managers are finding it very attractive and cost effective to merge and unify voice and data networks into one. It is easier to run, manage, and maintain. However, one has to keep in mind that IP networks are best-effort networks that were designed for non-real time applications. On the other hand, VoIP requires timely packet delivery with low latency, jitter, packet loss, and sufficient bandwidth. To achieve this goal, an efficient deployment of VoIP must ensure these real-time traffic requirements can be guaranteed over new or existing IP networks [4].

There are three indispensable VoIP components at the end-systems: codecs, packetizer and playout buffer, as shown in Figure 1. The analog voice signals are digitized, compressed and then encoded into digital voice streams by the codec. Voice codecs are standardized by the International Telecommunication Union Telecommunication (ITU-T), such as G.711 with the data rate of 64 kbps, G.729 with 8 kbps, G.723.1a with 5.3/6.3 kbps, etc. The output voice stream then enters the packetizer to generate constant bit rate (CBR) audio packets with RTP(RTCP)/UDP/IP header where RTP and RTCP are Real-time Transport Protocol and Real-Time Control Protocol, respectively, which are designed to support real-time multimedia applications with stringent delay constraint over unreliable User Datagram Protocol (UDP). Besides these, call set-up signaling protocols, such as Session Initiation Protocol (SIP) and H.323, are used for establishing VoIP connections. SIP, defined in RFC 2543 of Internet engineering task force (IETF), is a signaling protocol for Internet applications, e.g. conferencing, telephony, events notification, and instant messaging. H.323 standardized by ITU-T has been especially focused on smooth interworking with the PSTN. Voice packets are transmitted over the IP network, and the reverse processes of decoding and depacketizing are accomplished at the receiver. A playout buffer is used by the receiver to smoothen the speech by getting rid of delay jitter. Packets arriving later than the playout time will simply be discarded. Some other components such as voice/silence detector, loss/error concealment and echo canceller, are also included in the system to enhance the functionality and performance of VoIP systems. The major metric to evaluate the user-perceived voice quality is the Mean Opinion Score (MOS), which is rated on a scale of 1–5 [5].

Wireless broadcast networks, by their very nature, provide the opportunity for user mobility. Within the range of a given wireless base station, a client may roam freely and with complete transparency to the network medium. It is exactly this capability that has driven the success of the $1.5 billion 802.11- based wireless network market [6]. Inexpensive 802.11 based access points (APs) provide transparent connectivity to the wired Internet at low cost and with minimal configuration overhead. However, each individual 802.11 access point (AP) has a limited range - frequently under 100 meters indoors and therefore large-scale deployments of access points are required to provide comprehensive coverage of a building or campus (e.g. UC San Diego's campus 802.11 network, seen in Figure 2.1, includes over 250 managed public access points). Preserving the same network transparency across collections of access points requires a far greater degree of coordination and management. As a client moves outside the range of one access point, it must hand off to another to preserve the illusion of seamless connectivity.

In cellular data and voice systems this handoff decision is typically coordinated by the network itself, which is able to leverage considerable information about the network topology and client proximity. Fig. 2 shows Geographic map of 802.11b wireless coverage at UC San Diego (courtesy http://activecampus.ucsd.edu). The entire coverage area is serviced by over 250 official access points and again as many private access points should be managed autonomously and independently by each client with no a priori knowledge of the local network topology [7]. Moreover, while most cellular systems provide a means for continuously monitoring signal quality between each client and all of its neighboring base stations handing off whenever an alternative base station is found to provide better service. 802.11-based systems only monitor the signal to their current access point and handoff only after service degrades below an acceptable threshold. Consequently, as a mobile 802.11 client reaches the limits of its current coverage region, it must temporarily abandon its current access point, actively probe the network to discover alternatives, and only then reconnect to the current best AP. This approach minimizes management overhead, but is slow to handoff to superior access points and worse, can produce gaps in connectivity of up to a second in duration. While such disruptions may be acceptable for nomadic applications with limited mobility and flexible response time requirements, emerging applications like wireless voice-over- IP are far more demanding [8,9]. These applications require highly interactive response during mobility and are extremely sensitive to network outages and delays. Moreover, the limited range of 802.11 radios makes handoff actions highly probable for continuously mobile clients (such as a user walking with an 802.11-based phone. Handoffs are broadly classified into two categories hard and soft handoffs .Usually ,the hard handoff can be further divided into two different types intra and inter-cell handoffs known as horizontal as well as vertical handoff respectively.

The vertical handover was introduced with the development of different wireless technologies and the coexistence of their networks including GSM, GPRS, and UMTS as cellular networks and WiFi , WiMAX as broadband access networks. This handoff process of a mobile terminal takes place among access points supporting different network technologies. For example, the changeover of signal transmission from an IEEE 802.16 WiMax base station to a cellular GPRS network is considered as a vertical handoff process. Due to the different technologies of the networks, more than one interface is required during the handoff process .When a mobile user moves out of the coverage of a WLAN, and connects to the base station (BS) of a radio cell, or vice versa, the procedure is called a vertical handoff. The procedure of horizontal handoff consists of three stages. First, the mobile user should make the handoff decision according to the received signal strength or other measurements. Second, the mobile user performs layer-2 handoff to another AP. Third, layer-3 handoff is performed to ensure the end-to-end connection if necessary. The layer-2 handoff can further be separated into three steps. First, a mobile user tries to discover the APs by broadcasting probe request frames to collect information from all available APs, or directly collects information of APs from received beacon frames. This step accounts for the most part of the handoff delay. Then, the mobile user is authenticated by the new AP. Finally, the mobile users associate with the new AP and de-associate with the old AP if it receives the positive reply from the new AP. The horizontal handoff has been studied in Reference. It is shown that the latency of horizontal handoff usually takes more than 150 ms. The vertical handoff is more complicated and takes longer time, depending on how tightly two wireless systems are coupled. In the tight coupling mode, WLANs are connected directly to the 3G core network, and traffic from WLANs goes through the core network to the BS, and vice versa. In the loose coupling mode, both the cellular network and WLANs are connected to the Internet backbone, and data paths of the two networks are independent. As shown in Figure 3, WLAN1 is tightly coupled with the cellular network while WLAN 2 is loosely coupled. The vertical handoff between the loosely coupled General Packet Radio Service (GPRS) system and WLAN takes around 4 s (from WLAN to GPRS) or 7 s (from GPRS to WLAN). The vertical handoff between the third-generation (3G) cellular system and WLAN takes up to several hundred milliseconds, which is still too lengthy to voice connections. Moreover, packets may be dropped by the old AP during the handoff procedure, which degrades, or even disconnects the voice connections during the handoff. The handoff process in 802.11 networks has several phases each with its own costs. Figure 4 depicts this time-line graphically. First, a client must determine that it is nearing the periphery of its coverage and thus must find an alternative access point to continue. Minimally, this involves detecting that packets are no longer being successfully received. However, typical commercial implementations also monitor the current signal-to- noise ratio (SNR) and will also initiate the scanning phase when this value passes a pre-defined minimum threshold. Setting this threshold is something of a black art: if the client waits too long to look for new access points then it may incur additional disruption, yet if the client is too eager then it may ping-pong between access points needlessly. Once a client has decided to attempt a handoff it must next identify the set of proximate candidate access points. Since 802.11 do not provide a shared control channel or other means for distributing this information, the client must explicitly scan each channel (11 in 802.11b and 802.11g, and 8 for 802.11a indoors) for potential access points. In its simplest form, this scan can be completely passive the client switches to a candidate channel and listens for periodic beacon packets generated by access points to announce their presence (typically every 100ms). However, the latency incurred by this approach can be quite long since the phase of beacon intervals is independent and a client must therefore wait the full interval on each channel. 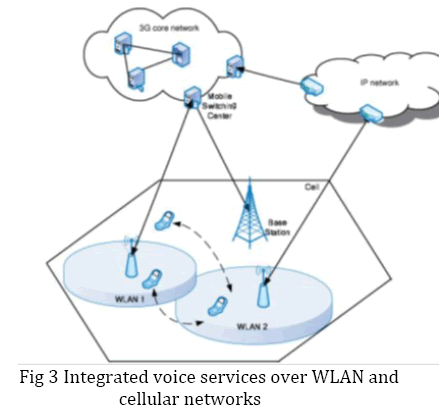 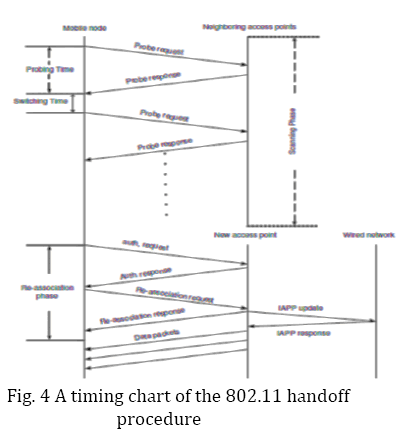 Mobile voice applications are the next challenge for 802.11- based wireless networks. One of the major impediments is the high cost of handoff as clients roam between access points in an infrastructure network.