Para Pharyngeal Space (PPS) tumours are mostly benign (80%). These are rare tumours of head and neck with incidence of about 0.5% [1]. They originate in a complex anatomical area with subtle clinical presentation. Proper evaluation to differentiate the tumour into pre styloid and the post styloid compartment is very essential. They represent a formidable challenge to the surgeon both in preoperative assessment and surgical approach. These tumours display very few symptoms. Radiological and cytological study is mandatory for preoperative diagnosis and planning. Fine Needle Aspiration Cytology (FNAC) is accurate in 90–95% cases. Surgery forms the first line of management for these tumours. We are presenting a retrospective study of evaluation and management of PPS tumours. The institutional protocol for management along with the follow up of patients for 1 year is studied and discussed here (Table 1).

We conducted this study to assess parapharyngeal tumours clinically as well as radiologically, with emphasis on their routes of spread, surgical approach and variety of histology.

This is a retrospective review of clinical records of 12 patients treated for PPS tumours. This study was conducted in the Department of ENT RG Kar medical college hospital Kolkata. Patients who presented to the outdoor with swelling in the neck with the obliteration of retro mandibular groove or swelling on lateral wall of oropharynx or tonsillar fossa were considered into study. Cases of cervical lymphadenitis (including tubercular lymphadenitis), submandibular gland swelling were excluded from this study. Study period was from July 2013 to May 2014. Total number of patients included in our study was 12 (sample size-12). Signed informed consents were obtained from all patients. Detailed history of onset, duration, evolution of disease was taken and thorough clinical examination including cranial nerve examination was carried out to come to a provisional diagnosis. These patients were followed up for a period of 1 year. Among the twelve patients, 4 patients were male and 8 patients were female. There was female predominance.

The pre-operative protocol was based on imaging study (contrast enhanced CT scan, MRI, MR angiography) to establish site, size, anatomical relationship and FNAC to determine the nature of mass (Figure 1). On basis of whether the tumour belongs to pre or poststyloid compartment surgical approach was planned and the surgical specimen was sent for histopathological evaluation. 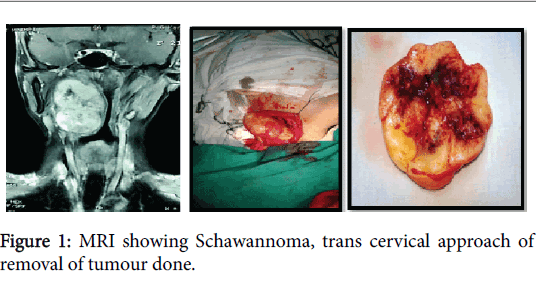 In this study 10 PPS tumours were benign and 2 malignant. The histological diagnosis came out as carotid body tumour in 2 patients, pleomorphic adenoma in 3 patients, schwannoma in 5 patients and mucoepidermoid carcinoma in 2 cases. Among these 12 patients 10 had underwent FNAC (excluding two cases with pulsatile neck mass). Positive predictive value of FNAC was 100%, both for benign as well as malignant. Trans cervical approach was performed in 7 patients who had schwannoma (5 cases) and carotid body tumour (2 cases). Two cases of pleomorphic adenoma in pre styloid compartment (only deep lobe involved) were operated by trans oral approach. One patient with pleomorphic adenoma needed extensive trans cervical hemi mandibulotomy approach. Trans-parotid trans cervical approach was opted for 2 cases of mucoepidermoid carcinoma followed by postoperative radiotherapy. All the patients were followed up for a period of one year. A through clinical examination was done. In cases of malignancy patient were followed up every 3 months once, and CT scan was done at the end of one year which showed no recurrence of tumour.

This study deals with tumours that are de novo originating in the Para pharyngeal space. According to the Liverpool university data, for a series of 114 patients, the most common PPS tumours are pleomorphic adenoma (n=34) of the pre styloid compartment, followed by Paragangliomas (n=33) and schwannoma (n=11) [2]. However, in our study the most common tumour was schwannoma and that too belonging to post styloid compartment (According to the Liverpool University study schwannomas stay as the third most common tumour following pleomorphic adenoma and Paragangliomas) [3]. The common clinical presentations are tabulated in Table 2.

The most common age group of presentation was second to third decade of life with female preponderance. Neck swelling was most common presenting symptom (75% cases) followed by oro pharyngeal swelling (25%). Two patients had pulsatile neck swelling (Figure 2). Fine needle aspiration cytology (FNAC) findings corroborated with post-operative histopathology reports in all cases. CT scan and MR imaging were of paramount importance in preoperative assessment of morphology and extent of lesion. In our study most of the tumours were benign. Only 2 patients were having malignancy. Mucoepidermoid carcinoma of parotid is the most common malignancy of salivary glands according to literature. In our study also the same fact was proved.

FNAC, radiology studies are mandatory for the evaluation of PPS tumours. FNAC can be USG or CT guided for a better result. Cranial nerve involvement has to be essentially ruled out. Suspected cases of carotid body tumour were evaluated by MRA, Doppler study, and balloon occlusion test. As there were chances of compromised cerebral blood supply, thorough evaluation of cerebral circulation was done. In both the cases of carotid body tumour USG abdomen, 24 hours VMA study was also done, to rule out other paragangliomas. In about 50% of patients there will be familial paraganglioma and they follow autosomal dominant pattern. In our case series familial condition was ruled out [4]. Schwannomas are the most common neurogenic tumours of head and neck, second most common PPS tumours. In our study the most common tumours were schwannomas. Only one was male other four were females. All the cases presented with neck swelling. The male patients’ complaint was mouth breathing, difficulty in swallowing with a swelling in neck.

All schwannomas were arising from sympathetic chain. All these patients had classical post styloid compartment presentation. The male patient had a classical symptom of swelling increasing in size with valsalva. The reason for this could be, most neurofibromas arise from Schwann cells and are usually subcutaneous, hence increasing in size with valsalva. One thing we have to be aware about these tumours is, they may be multiple, and may be associated with Von Recklinghausen’s disease [5]. In case of multiple neurofibromas, chances of malignant transformation are higher [5]. Though all of our patients were having sporadic lesions, none was diagnosed to have multiple neurofibromas.

Three patients in this study had pleomorphic adenoma. All of them had the classical presentation of tumours of the pre styloid region, having oro pharyngeal swelling. There was no neck mass or swelling. FNAC studies proved it to be pleomorphic adenoma. Deep lobe of the parotid involvement has this classical presentation. Most of the tumours 80% arise from the superficial lobe. Only 20% arises from the deep lobe of the parotid gland. As these tumours are poorly encapsulated there is difficulty in resecting out completely and there are more chances of recurrence. Two other patients presented with malignancy of PPS. According to literature malignancy in PPS tumours are very low [6]. Both patients had extensive mucoepidermoid carcinoma, confirmed by FNAC, with involvement of both the lobes of parotid. These tumours were mainly involving the post styloid compartment. One was a male and the other was female. Surgery is the mainstay of treatment.

Preoperative decision regarding choice of surgical approach is critical for PPS tumours. According to the radiological extent of the tumour, involvement of pre or post styloid compartment and the FNAC report-all were vital for the planning. Only 3 tumours belonged to pre styloid compartment in our study. Among them two patients were managed with trans-oral approach. In one case mandibulotomy approach was needed for exposure of the huge mass (Figure 3). 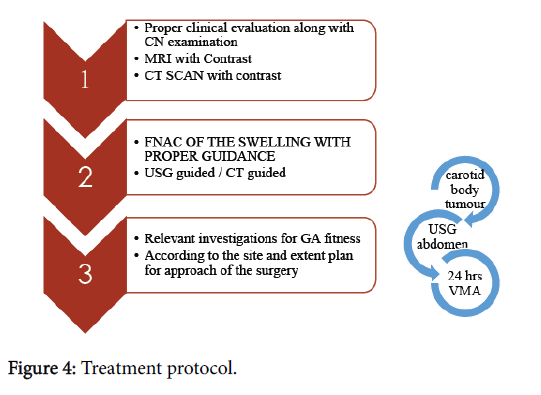 Most of the patients were operated with trans cervical approach with or without trans parotid approach was done (Table 3). In the case of mucoepidermoid carcinoma, intra operatively there were lots of cystic masses containing the fluid. There were no neck node metastases in either patient.

The treatment protocol followed in our department for PPS tumours are described in Figure 4. Pre-operative Tracheostomy may be required in cases of anticipated difficult intubation.

Paragangliomas have the characteristic histological picture of zellballen pattern [7]. These pictures are similar to adrenal phaeochromocytoma. As per our departmental protocol 24 hours VMA level measurement was done for carotid body tumour. Schwannomas have the characteristic picture of antoni A and antoni B bodies. There was no pleomorphism or increased nuclear cytoplasmic ratio. In cases of pleomorphic adenoma squamous metaplasia is a common finding and recurrent tumours show higher chances of malignancy. But in the study cases there was no recurrence of tumour, or increased mitotic activity suggestive of malignancy.

Mucoepidermoid carcinoma can be classified histologically as low grade when they are cystic, high graded when tumour is solid with necrosis and haemorrhage (Figure 5). Intra operatively also there were lots of cysts, suggesting it was a case of low grade malignancy [8]. No animals or humans were harmed duringbthis study.

Parapharyngeal space tumours have complex anatomical distribution with subtle presentation. Post styloid compartment tumours were more common in our study. Cytology and radiology are mandatory to plan the approach, as surgery is the treatment of choice in PPS tumours. Hence preoperative radiological assessment is very essential for the head and neck surgeon to know the pattern of spread and to remove the tumour completely so that there is least chance of recurrence. Follow up is mandatory, as in cases of malignancy survival rate is very poor. A proper multi-disciplinary approach is necessary for the proper treatment of these PPS tumours.

Copyright: © 2016 Manickam A, et al. This is an open-access article distributed under the terms of the Creative Commons Attribution License, which permits unrestricted use, distribution, and reproduction in any medium, provided the original author and source are credited.