Copyright: © 2014 da Matta ENR, et al.. This is an open-access article distributed under the terms of the Creative Commons Attribution License, which permits unrestricted use, distribution, and reproduction in any medium, provided the original author and source are credited.

Foreign bodies ingestion or aspiration situations are potential complications during orthodontic treatment. This article presents a case report of an orthodontic patient who accidentally ingested a section of orthodontic wire. The patient was accompanied by radiographs until the foreign body have been deleted.

Occasionally, during orthodontic treatment, orthodontic appliances or parts of orthodontic appliances can compromise the airway or the gastroinstestinal tract and consequently can create a serious medical problems. The dental literature reports objects that were swallowed by patients, such as dental prostheses [1-4], endodontic instruments [5,6], fragments of dental restorative materials [6] and others dental objects, such as toothpick [7,8] and toothbrush [9]. The aspiration or ingestion of orthodontics appliances is less common [6,10] have been reported an expansion appliance key [11,12], an orthodontic bracket [6,10], a lower spring retainer [13] , a fragment of fractured Twin-block appliance [14] and an archwire segment during orthodontic adjustment [15].

The medical complications depends on the size, shape and flexibility of the object, some occurrences present minimal danger while others have the potential to be lethal [16]. Many dental patients are treated in the supine position increasing the risk of accidental aspiration or swallowing of foreign objects [16], in addition, orthodontic wire can break and orthodontic brackets can debond after consultation, allowing the ingestion of the materials. 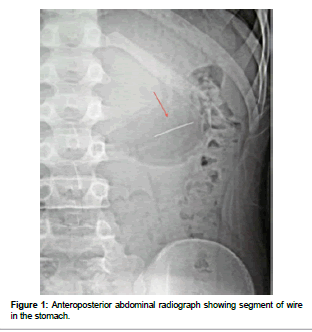 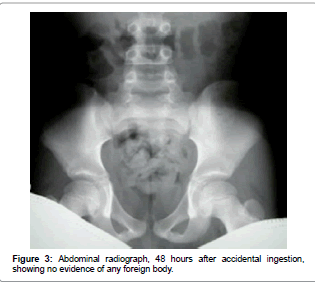 A healthy 12-year-old boy was having his Classe II division 1 malocclusion treated with standard edgewise appliance. Two weeks after placement of the second wire, when the patient was using a 0.016” nickel titanium arch wire, the patient stated that a portion of the lower arch wire broke after it was detached. The parents stated that the patient often removed the orthodontic wire from the orthodontic tube with the tongue and the fingers allowing the arch fracture. Thus, the patient and parents went for a gastroenterologist. He was symptomatic showing discomfort but didn’t have signs of asphyxia or vomiting. The gastroenterologist tried to remove endoscopically, but got no success. The patient was referred to the Radiology Department of Açucar Hospital for anteroposterior and lateral chest and abdominal films.

The presence of a segment of wire approximately 2 cm was confirmed by an anteroposterior radiographs of abdomen in the stomach 3 hours after the incident (Figure 1). The patient had no symptoms of trauma or perforation. Thus, He was sent home and was recommended the consumption of a fiber-rich diet to facilitate natural elimination of the segment of wire. The patient and parents were advised to monitor the stools.

The next day, 18 hours after ingestion of the segment of wire, anteroposterior and lateral radiographs of abdomen were taken. The foreign body was in the sigmoid colon (Figure 2) and the patient remained asymptomatic during this period. The patient was accompanied by radiographs until the foreign body have been deleted, 48 hours after ingestion, radiographs of the abdomen were taken and the films showed no sign of the wire, suggesting that the foreign body had been expelled, but the segment of wire was not identified in the stools (Figure 3).

The aspiration or swallowing of dental materials can result in clinical complications and subsequent legal proceedings. Orthodontic appliances or parts of them can be accidentally aspirated or swallowed. The presence of any foreign body in the airway is less common, but it needs to be treated as a serious situation because an aspirated foreign object can constitute a true medical emergency.

The majority of foreign bodies entering the oropharynx will pass into the alimentary canal [17] without incident, although there is a danger of perforation of the gut, which can have serious consequences, including death [18].

After swallowing of foreign bodies, they can go through the gastrointestinal tract without problems [18,19], can lodge in the throat [12,20], esophagus [14,19], stomach [7,9] and intestine [3,11,18]. The most common complications include obstruction or perforation.

Once a foreign object has reached the stomach it has a 80%-90% possibility of passing along the gut without problems [13,17,18]. Less than 1% of foreign bodies have caused a perforation [20].

After leaving the stomach, the most common subsequent site of perforation or obstruction is the ileocaecal valve [18,21] and the sigmoid colon [12,18] and the risk o obstruction is increased in patients with abnormal intestinal anatomy such as strictures [16].

In case described in this article, the patient remained asymptomatic during the period of clinical observation because the segment of wire simply transit through the gastrointestinal tract and then was eliminated in the excrement.

If it is confirmed that the patient has swallowed a foreign object, the usual time taken for a foreign body to traverse the intestinal tract is 2 to 12 days [12,13]. The observation that the object are lodge in the gastrointestinal tract results in the need of some type of intervention, such as endoscopy [7,9,14] or surgery [3].

Radiographs allow the clinician to confirm the presence of a foreign body, and to assess its size, shape and position, and to look for indications of intestinal perforation [16].

The management of patients with history of swallowing of foreign bodies depends on regular assessment and serial radiography. The patient should be evaluated for symptoms of intestinal perforation or obstruction, such as abdominal pain, fever, abdominal distension or vomiting [18]. The risk of a foreign body causing perforation or obstruction is related to the shape and size of the object. Sharp pointed objects are associated with a higher risk of perforation and objects longer than 5 cm are unlikely to pass the duodenum [22]. In this clinical case related, there was a higher risk of perforation because the segment of wire had a pointed shape, but the radiographs demonstrated that the foreign body was transiting through the gastrointestinal tract normally.

The best option is to prevent accidents with foreign bodies [16], because there is no way for us to totally eliminate the possibility of a patient swallowing an appliance [13] or segment of wire. Thus, care must be taken to minimize the risk. Patients and parents should always be advised verbally and with written instructions about not try to remove any part of appliance and segments of appliances because the orthodontic arch may break and the patient swallow the broken fragment. It is also important to protect the throat with gauze when working with small parts that have the risk of being swallowed or aspirated as in the case of insertion of mini implants for palatal or lingual tooth. Tying devices to handle, as transpalatal bar at the time of its installation, as well as activation keys used to activate devices expanders are some guidelines recommended to avoid accidents. In case of accidents, emergency contact with the orthodontist.

When a foreign body is accidentally swallowed, the first step is to eliminate the possibility of aspiration. The patient should be referred for medical care and possible early elective removal if there is an increased risk of perforation. The radiographic follow-up is good resource to certify the passage and removal of the foreign body from the gastrointestinal tract.