Acoustic Echo Cancellation for the Advancement in Telecommunication

An improved design of acoustic echo canceller has been proposed for the advancement in telecommunication to avoid acoustic echo, which is capable of providing convincing results. In this acoustic echo cancellation algorithm, a Frequency-Domain Adaptive Filter (FDAF) has been considered which uses a fast convolution technique to compute the output signal and filter updates. This computation executes quickly in MATLAB through frequency-bin step size normalization to get better performance. There are different techniques already used for signal processing but the proposed design provides an advance feature for better quality signal. Since there has been a revolution in the field of personal computers in recent years, this work attempts to implement the acoustic echo canceller algorithm on a PC with the help
of the MATLAB software.

The advent of telephony echoes has been a problem in communication networks. The most important factor in echoes is called end-to-end delay, which is also known as latency. Latency is the time between the generation of the sound at one end of the call and its reception at the other end. Echo is the reflected copy of the voice heard some time later and a delayed version of the original sound or electrical signal is reflected back to the source. Echo is a congenital problem which mainly occurs in PSTN (Public Switching Telephone Network). Echo occurs in analogy part of a telecommunication system [1]. Echoes of our speech are heard as they are reflected from the floor, walls and other neighboring objects. If a reflected wave arrives after a very short time of direct sound, it is considered as a spectral distortion or reverberation [2]. However, when the leading edge of the reflected wave arrives a few tens of milliseconds after the direct sound, it is heard as a distinct echo. In data communication, the echo can incur a big data transmit error. In applications like handsfree telecommunications, the echo, with rare exceptions, conversations take place in the presence of echoes [3].

In Srinivasaprasath Raghavendran Implementation of Acoustic Echo Canceller process [4] is using MATLAB but the Near end and Far end signals are taken separately. Also in this echo cancellation process complex algorithms are using. According to asterisk echo cancellation process [5] the received signal regenerated in multiple copies with small time delay. Then these delayed copies of signals are scaled and subtracted from the Original received signal to get the echo free signal. Jerker Taudien et al [6] proposed to insert a known signal at the far-end and recording the near-end signal as a method of line probing. The two signals are then analyzed together for various impediments. Finally, Patrashiya Magdolina Halder et al [1] has proposed an echo cancellation process using inverse filtering in MATLAB, which analyze the received signal and remove echo from the acquired signal for the field of VOIP. First voice signal is acquired with an additional speech recorder. Then this acquired voice signal is used to create .wave file using the audio signal.

This paper has suggested the acoustic echo cancellation algorithm for both in Voice Over Internet Protocol (VOIP) and telecommunication system using the MATLAB, without any additional software than all the above proposed echo cancellation method. A simple Frequency Domain Adaptive Filter (FDAF) is used here for canceling echo without clipping and distorting the main signal.

The rapid growth of technology in present decades has changed the whole dimension of global communications. New safety regulations are leading the field of telecommunications towards handsfree radio/telephones. With such a system, the speaker (operator) can talk freely and still concentrate on his driving task [7]. Now wireless phones are regarded as essential communications tools and have a direct impact on people’s day-to-day personal and business communications. Examples of such systems are mobiles, VOIP calls by using, for instance, Skype, the teleconferencing for meetings or remote educations etc. and the hands-free operations have gained more and more popularity in recent years. But echo can degrade the quality of service, and echo cancellation is an important part of telecommunication systems. The development of echo reduction began in the late 1950s, and continues today.

Subscriber demand for enhanced voice quality over wireless networks has driven a new and key technology termed echo cancellation, which can provide near wire line voice quality across a wireless network. Today’s subscribers use speech quality as a standard for assessing the overall quality of a network. Regardless of whether or not the subscribers’ opinion is subjective, it is the key to maintaining subscriber loyalty. For this reason, the effective removal of hybrid and acoustic echoes, which are inherent within the telecommunications network infrastructure, is the key to maintaining and improving the perceived voice quality of a call [4].

▪ The simulation process can be described as:

▪ The input signals, both far-end and near-end signals, were simulated and given to the AEC, which executed on a PC with the MATLAB environment.

▪ The input signals 30 seconds in duration.

▪ A sampling rate of 44100 Hz was used for all the signals in the simulation.

Set mu (step size) value to 60% larger than before; Signal Near and Far end are taken physically environment then record in .wav format then loading in MATLAB and convert .mat file for analyzing in MATHLAB. Then Signal with echo is entered into Frequency Domain Adaptive filter (FDAF) to remove echo from Microphone Signal. Main signal (Near end), Echo signal (Far end) and Microphone signal (Near end + Far end) are shown respectively shown Figure 2, 3 & 4.

Figure 4: The Microphone Signal with Echo

Now this Microphone Signal is entered into Adaptive filter to get desired Echo free signal which can be transmitted to the receiver end contain only near end signal (Sender speech). After Filtering echo free Signals shown in figure 5. 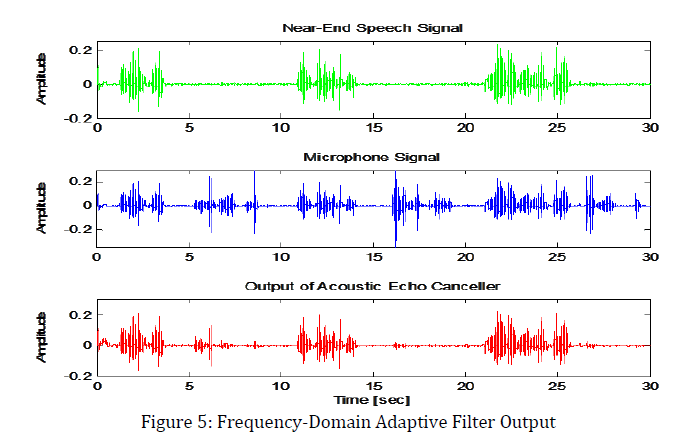 From the above figure, it is clear to see that echo is removed from microphone signal and output signal seems like to original signal. For more analysis and assumption that how much echo is removed, Fast Fourier Transform is applied in Both Original Signal (Near end), Echoed signal (Microphone Signal) And Echo free signal which found after filtering by Adaptive filter. This analysis is done by using MATH LAB WAVELET tools. 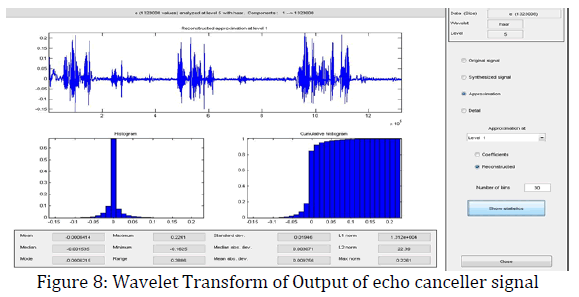 The difference between signal with echo and signal without echo has been observed and the echo is removed from the echoed signal. Both the wavelet and coefficient wavelet transformation are used for better analysis. For further analyze the values from the experiment are extracted and by taking the values a table and graphs are plotted, which will help to prove that the echo is removed from the signal. The statistical values such as mean, median, mode and standard deviation are also analyzed.

From the Table-1, using the standard deviation value for both Original and Echo free signal the percentage of error is calculated by a statistical equation.

So, It is found that the desired output signal success rate is 97.31%.

With the world shrinking into a global village because of superior communications, telephones, both conventional and hands-free sets, occupy a prominent position in solving people’s communication needs. One of the major problems in a telecommunication application over a telephone system is echo. The Echo cancellation algorithm presented in this paper successfully attempted to find a software solution for the problem of echoes in the telecommunications environment. The experiment was completely a software approach without utilizing any DSP hardware components. The algorithm was capable of running in any PC with MATLAB software installed. This technique is faster and provides almost perfect results for canceling acoustic echoes without clipping of the reference speech signals. The audio of the output speech signals were convincing and satisfactory.