Copyright: © 2017 Mohamed S, et al. This is an open-access article distributed under the terms of the Creative Commons Attribution License, which permits unrestricted use, distribution, and reproduction in any medium, provided the original author and source are credited.

Background: Optimal birth weight is an important factor for the future health of the newborns. Aberrations in fetal growth are associated with adverse health effects both in early life and in late childhood and adulthood. Fetal growth is controlled by both maternal hormones and nutrition. Adipokines, including resistin and adiponectin are known regulators of energy metabolism; although their role in the regulation of fetal growth still poorly understood. Objective: The aim of the present study was to evaluate the relationship between adiponectin and resistin with abnormalities of neonatal birth weight and to identify the correlation between these proteins and various maternal and neonatal factors. Patients and Methods: Comparative controlled study included 120 full term newborns recruited from Al-Azhar University Hospital (New Damietta), during the period from January 2016 to February 2017. Included newborns were divided into 3 groups; group 1) 40 small for gestational age (SGA) newborns, 2) 40 large for gestational age (LGA) newborns, and group 3) 40 apparently healthy appropriate for gestational age (AGA) newborns, were selected randomly. Serum umbilical cord adiponectin and resistin were measured by ELISA. Results: There was no significant difference between groups as regard to maternal age (P: 0.797), parity (P: 0.77), gestational age (P: 0.528) and BMI (P: 0.091). Umbilical cord resistin and adiponectin were significantly lower among LGA group (resistin: 16.9 ± 1.92 ng/ml; adiponectin: 6.74 ± 2.23 Ã¡Â¶Â™g/ml), and significantly elevated among SGA group (resistin: 23.03 ± 3.97 ng/ml; adiponectin: 14.92 ± 3.19 Ã¡Â¶Â™g/ml) than AGA group (resistin: 17.98 ± 1.89 ng/ml; adiponectin: 11.04 ± 1.91 Ã¡Â¶Â™g/ml; P

Optimal fetal growth is considered a corner stone in determining life expectancy, while growth aberrations may have implications for disease risk across the lifespan [1]. Abnormal fetal growth, both restriction and overgrowth, is associated with fetal, infant, and child mortality and morbidity [2,3].

Fetal growth restriction increases the risks of intrauterine demise, neonatal morbidity, and neonatal death [4]. Furthermore, growthrestricted fetuses are predisposed to the development of cognitive delay in childhood and diseases in adulthood [5].

Fetal macrosomia is associated with increased mortality, nerve injuries, fractures and birth asphyxia [6]. In the long term, infants who are LGA are at higher risk of cardiovascular and metabolic complications in adulthood [7].

Intrauterine growth depends mainly on trans-placental supply of nutrients and the hormonal environment of the fetus [8]. Fetal hormones control the passage of nutrients between fetal oxidative metabolism, mass accumulation and tissue differentiation. It also controls fetal growth through its action on the placenta [9,10].

Adiponectin and resistin are adipocyte-secreted hormones with suggested roles in energy and glucose homeostasis. They also implicated in the pathophysiology of obesity-related insulin resistance [11]. However, their specific role during fetal and neonatal periods is under-investigated [12].

Adiponectin is a protein consisting of 247 amino acids, including the N-terminal hypervariable region and a C-terminal like globular domain [13]. Several studies have demonstrated that adiponectin plays a role in regulating fetal growth by modulating placental nutrient transport [14-16]. It prevents insulin-stimulated amino acid uptake in cultured primary human trophoblast cells by modulating insulin receptor substrate phosphorylation [17]. Furthermore, adiponectin expression in the placenta is related to maternal blood glucose across the range from normal to pathological [18], indicating a role in regulating placental transport and growth of the fetus in relation to maternal nutrient status [19].

Resistin is a recently discovered protein that is secreted by adipocytes and can exert pleiotropic biological effects through endocrine, paracrine and autocrine mechanisms [20]. It is also secreted from human placenta and is supposed to act as energy source in fetal metabolism [21]. Resistin was detected with high levels in cord blood during gestation consisting with a regulatory action on tissue differentiation and fetal growth [22].

The factors controlling intrauterine growth are important in early life programming of health in later life [23]; in addition, the mechanisms of fetal weight regulation during pregnancy remain poorly understood [9]. Therefore, we conducted this comparative controlled study to highlight the possible role of adipokines in regulating fetal growth, which might help us better understanding the pathophysiology of fetal growth aberrations and the associated morbidities.

At present, little information is available with respect to adiponectin and resistin in newborn birth weight. Thus, the aim of this work is to study the relationship between adiponectin and resistin with the occurrence of fetal macrosomia and fetal growth restriction and to identify the correlation between these proteins and various maternal and neonatal factors.

Maternal age, parity and mode of delivery were reported. Maternal BMI was calculated by dividing the weight in kg by the square height in meters. Gestational age was determined based on the last menstrual period, the first trimester ultrasound examination and Ballard scoring. Neonatal anthropometric measurements (weight, length head circumference) were evaluated by an expert physician.

Blood samples (5 ml of cord blood) were collected from the umbilical vein after delivery of the infant. Blood samples were centrifuged and aliquoted, and frozen at -80°C until analysis. The adiponectin in the serum was determined by a commercially available ELISA (R&D Systems, Wiesbaden, Germany). The measurement of resistin in cord blood was performed by Bender Med systems (Vienna, Austria) and by using primary and secondary antibodies by standard ELISA method.

The study was approved by the local ethical committee. Written informed consent was obtained from parents.

Data were analyzed using the SPSS version 19.0 (SPSS Inc., Chicago, IL, USA). Quantitative data were expressed as the mean ± standard deviation (SD). For comparisons of data, the Student’s t test was used to compare between two means and one way analysis of variance (ANOVA) to compare more than two means.

Qualitative data were presented as relative frequency and percent distribution. For comparison between groups, Chi square test was used. Pearson correlation coefficient was performed to correlate different variables. For all tests, significance was considered if p<0.05.

Table 1: Characteristics of mothers and neonates in studied groups.

Figure 1: Correlation between birth weight with cord resistin and adiponectin.

Correlation of cord resistin and adiponectin with various parameters

Table 3: Correlation of cord resistin and adiponectin with various parameters. 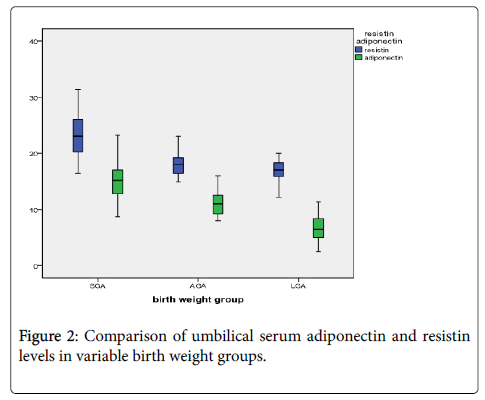 Adiponectin is a member of the growing group of adipose secreted proteins, sometimes described as adipocytokines [24]. Resistin is an adipocyte-derived peptide, which is involved in glucose metabolism, by increasing insulin resistance [22]. Changes in the maternal hormones can affect fetal growth, which may result in increased susceptibility to diseases in postnatal life [9].

In pregnancy, the role of resistin has yet to be determined. Several studies have reported that resistin is generated in the placenta, and its levels are increased during pregnancy [36]. Di Simone, et al. found that resistin can induce the production of vascular endothelial cell growth factor and assumed that it may modulate the invasive behavior of the trophoblast and the proliferation of the feto-placental vascular system [37].

Similar to our results, Wang, et al. [39] found that serum adiponectin and resistin levels in control babies were significantly higher than that in macrosomic babies, whereas significantly lower than that in FGR babies. Umbilical serum adiponectin levels and placental adiponectin expression were inversely correlated with birth weight. Farid et al. [40] reported that the umbilical blood resistin level was not correlated with maternal age or BMI. Resistin level of blood cord in AGA group was much elevated than in SGA group (P <0.001). More recently, Giapros, et al. [41] reported significant higher level of resistin in the SGAs than the AGAs newborns (P=0.03) at 12 months of life and there was significant correlation with birth weight. In addition, matching with our results, Cortelazzi, et al. [22] demonstrated that resistin levels showed a negative correlation with gestational age (P<0.0001, r=-0.7).

In contrast, a recent study concluded that cord blood levels of adiponectin and resistin were not associated either with birth weight or newborn weight change [12].

Thus, it has been suggested that high levels of resistin, besides its effect on energy homeostasis in fetus, may have an important role in weight control by its effects regulating adipogenesis with negative feedback [38,40].

In contrast to resistin, adiponectin is well described as associated to birth weight. Several studies have demonstrated a positive correlation between cord blood adiponectin and birth weight [42,43] while others have found a negative association, when examining macrosomic newborns [44,45].

In contrast to our results, a recent study reported non-significant difference between 30 LGA and 30 AGA newborns as regard umbilical serum adiponectin (P=0.057). However, they included both term and late preterm newborns, which might have affected the results.

Because many reports showed that the adiponectin level was significantly lower in large-for-gestation newborns, a negative feedback mechanism between adipose tissue and adiponectin level might be exerted, even in the fetus. This is compatible with the suggestion that adiponectin may be involved in fetal development during pregnancy and may be related to the occurrence of fetal macrosomia and FGR [39].

In summary, adiponectin and resistin have direct correlation with neonatal birth weight indicating the important role in controlling fetal growth which may result in the occurrence of fetal macrosomia and intrauterine growth restriction.

Our findings pointed to the potential role of adiponectin and resistin in regulation of fetal growth, probably through their effects on supply of nutrients to the placenta and mediated by insulin receptors. These results might help understanding the pathophysiology of fetal growth aberrations; thus, better insights to the control of various complications that associated with these disorders, either early-onset complications as hypoglycemia and other metabolic disturbances or late-onset complications including cardiovascular, metabolic and endocrine abnormalities.