Onion (Allium cepa L.) is an important export oriented vegetable among the cultivated Allium crops in India. Onion Thrips (Thrips tabaci Linderman) is the key biotic factor for reducing yield loses in both onion as vegetable crop as well as seed crops. Besides direct damage to both foliage and bulbs, thrips can also indirectly aggravate purple blotch and act as a vector for viral disease such as Iris yellow spot. In absence of high levels of host plant resistance to Thrips tabaci and development of resistance towards number of pesticide of late, there is an urgent need to look at other IPM options for effective management. A field study was conducted under the All India Network Research Project on Onion and Garlic, at the College of Horticulture (OUAT), Sambalpur, Odisha, India during the winter season 2010-11 to 2012-13 to find out the most effective eco-friendly IPM modules for management of thrips in onion. The treatment consists of M1: IPM module, M2: Farmers’ Practices and M3: Control, laid out in RBD. The results obtained over three years indicated that both M1 and M2 not only significantly reduced the thrips population (21.68 and 21.02 thrips plant-1) but also increased total marketable yield (25.86 and 25.70 tha-1), respectively over the control, M3 (39.13 thrips plant-1 and 20.58 tha-1) . Higher BC Ratio was recorded in M1 (3.26) than M2 (2.70). It is concluded that adoption of the IPM module approach consisting of planting of border crop of two rows of wheat and one row of maize, 10-15 days prior to planting of onion seedling, dip treatment with Carbosulfan and need based insecticides spray, when thrips population exceed ETL (30 thrips/plant-1) not only reduces the thrips infestation but also increases the bulb yield with quality of onion bulbs.

Onion (Allium cepa L.) is an important export oriented vegetable among the cultivated Allium crops in India. It is grown in Rabi, Kharif as well as late Kharif seasons in India with maximum area of 60% in Rabi (winter) season alone. Onion Thrips (Thrips tabaci Linderman) is the key biotic factor for reducing yield loses in both bulb as well as seed crops in all seasons in onion. Besides direct damage to both foliage and bulbs, Thrips tabaci can indirectly aggravate purple blotch and vector for viral diseases, as well as Iris yellow spot [1] Thrips tabaci is now treated as the measure production constraints of onion at the national level in India [2] . Abundant literature is available on various aspects on onion thrips and their management in onion. Though host plant resistance is a crucial component of IPM, in absence of high levels of host plant resistance to Thrips and development of resistance towards number of pesticide of late. There is an urgent need to look at other IPM options for effective management of thrips. Keeping this in mind, the present study was carried out to study the effectiveness of IPM modules in onion crops against onion thrips.

The experiment was carried out under the All India Network Research Project on Onion and Garlic, at the College of Horticulture (OUAT), Sambalpur, Odisha, India during the winter season of 2010-11 to 2012-13. The three treatments used were: T1: IPM, T2 : conventional farmer practices and T3 : Control with 8 replication per treatment by adopting Randomized Block Design. The details of each treatment are given in Table 1.

Onion seedlings variety Bhima Super of about 45 days old were transplanted in plot size of 250 m-2 for each module (40 beds of 3 m×2 m) with a spacing of 15 cm×10 cm on 20.10.2010 to 23.10.2010 ; 7.12.2011 to 9.12.2011 and 28.11.12 to 30.11.12, respectively . All recommended practices recommended by Directorate of Onion and Garlic Research (ICAR), Rajgurunagar, Pune, India, was adapted uniformly to all the modules except the insecticidal treatments which were adopted on the basis of the treatments. Insecticidal treatments were given as soon as thrips were recorded in treatment plots. The observations on thrips population were recorded at 30, 45, 60, 90 days after planting (DAP). The marketable bulb yield was recorded for each replication including only A+, A, B & C grade bulbs. The bolters, double, small size bulbs and rotten bulbs were excluded while calculating the marketable bulbs for this study. All data generated were subjected to statistical analysis and the efficacy different module was assessed P value at 5% level [3].

In the field study on efficacy of IPM module, the population of Thrips tabaci was significantly low in T1, (9.67 and 20.52 thrips/ plant-1) as compared to T2, conventional Farmers’ Practice (13.91 and 31.36 thripsplant-1) up to 60 DAP. Subsequently, the thrips plant-1 was significantly lower in farmers’ practice (29.27 and 25.42) than IPM plots (38.12 and 35.53), respectively. However, at all stages of observations both IPM and farmers’ practice significantly reduced thrips population up to 90 DAP and pooled results, except 30 DAP over the control plot (Table 2 and Figure 1). The non-significant effect on thrips population during the initial 30 DAP stage might be due to the initiation of thrips infestation stage. Similarly, the better efficacy of reducing the thrips population upto 60 DAP in IPM module might be due to border crop effect of both wheat and maize. Thrips are weak fliers and can be carried by the wind. Therefore, planting live barriers like maize and wheat could effectively block or reduce adult thrips reaching onion plants. Similar report of efficacy of border crop – maize and wheat to block thrips in onion has been reported by [4]. On the other hand, significant reduction in thrips population after 75 and 90 DAP in farmers’ practice over IPM might be due to senescence of boarder crop effect, both at wheat and maize. On the contrary, due to repeated spraying of insecticides, the thrips population was well under control in T2, the farmer’s practice (Figure 1). 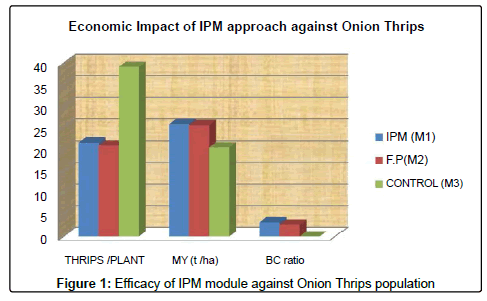 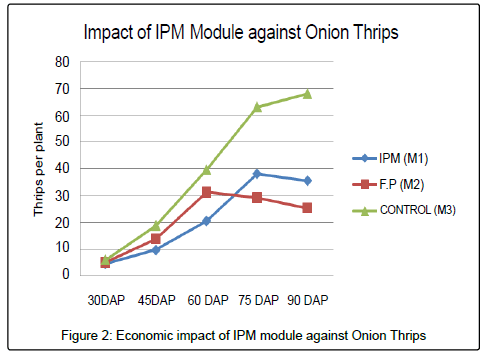 The economics of marketable bulb yield in onion mean over three years revealed that adoption of IPM treatments was best with highest Benefit Cost ratio of 3.26 than farmers’ practices (2.70). The higher BC ratio in IPM plot is primarily due to less insecticidal application [1] and additional income from the border crop – maize & wheat as compared to farmers’ practice. Similar report of highest BC ratio was estimated in control plots between 45-75 DAP in onion [5].

It is concluded that adoption of IPM module approach consisting of planting border crops of two rows of wheat and maize, 10-15 days prior to planting, seedling dip treatment with Carbosulfan and need based insecticides spray, when thrips population exceed threshold levels (30 thrips/plant-1) not only reduces thrips infestation but also increases the bulb yield with quality bulbs in onion.

We gratefully acknowledge the Orissa University of Agriculture & Technology, Odisha, India for the research facilities provided and to the Director, Directorate of Onion & Garlic Research (ICAR), Rajgurunagar, Pune, India for providing the financial & other facilities to carry out this study under AINRP on Onion and Garlic

Copyright: © 2014 Tripathy P, et al. This is an open-access article distributed under the terms of the Creative Commons Attribution License, which permits unrestricted use, distribution, and reproduction in any medium, provided the original author and source are credited.