Dens invaginatus occurs as a result of invagination of the enamel organ. These cases may present difficulties with respect to its diagnosis and treatment because of canal morphology. It frequently leads to caries, pulpal, and periodontal involvement with necrosis and loss of attachment. The knowledge of classification and anatomical variations of teeth with dens invaginatus are of utmost importance for correct treatment. This paper presents two cases of dens invaginatus and its treatment depending on the patient symptoms either by prophylactic sealing or root canal treatment.

Although the permanent maxillary lateral incisor is the most commonly involved tooth, it may occur in primary teeth as well as in the maxillary and mandibular arches [4]. In most cases, it appears to simply represent an accentuation in the development of a lingual pit [5]. The reported prevalence of adult teeth affected with dens invaginatus is between 0.3% and 10% with the problem observed in 0.25% to 26.1% of individuals examined [6]. The etiology of dens invaginatus is still unclear. Kronfeld suggested that dens invaginatus is caused by a focal failure growth of the internal enamel epithelium [7]. Oehlers suggested that the distortion of the enamel organ occurs during tooth development [8]. Other theories are infection, trauma and genetics as possible contributing factors [9,10]. The system described by Oehler’s appears to be most widely used to classify dens invaginatus on the basis of the radiographic appearance (Figure 1) possibly because of its simple nomenclature (Table 1). A 10-year-old girl reported with a chief complaint of sensitivity to cold in relation to upper front teeth since 1 week. The patient was in good general health. Extra-oral examination revealed no significant findings. Intra-oral examination revealed deep anatomic pits on palatal surface of maxillary central and lateral incisors (Figure 2). The teeth were non tender on vertical percussion and responded normal to thermal and electric stimuli. The periapical radiograph revealed Dens Invaginatus type II with respect to maxillary lateral incisors and Dens Invaginatus type I with respect to maxillary central incisors (Figure 3). 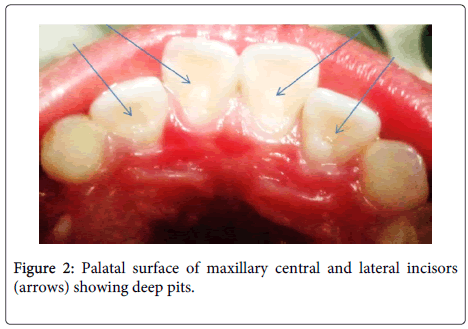 Orthopantomograph examination confirmed the presence of dens invaginatus in maxillary central incisors. On careful observation we noticed presence of taurodontism affecting the permanent both maxillary and mandibular incisors (Figure 4). Prophylactic sealing of all four invaginations was done using flowable composite (Filtek™ Supreme Ultra; 3M ESPE) (Figure 5). The patient remained asymptomatic when she reported 1 week after treatment and continues to be under follow up. Figure 5: Prophylactic sealing of the invaginations in maxillary incisors (arrows).

A 12-year-old boy reported with a chief complaint of pain with respect to upper left front tooth since 3 days. The patient’s general health was good. No significant extraoral findings were seen. Intra-oral examination revealed maxillary left central incisor with deep anatomic pit on palatal surface. The tooth was tender on vertical percussion and did not respond to thermal and electric stimuli. The periapical radiograph revealed type I Dens Invaginatus and periapical pathology with respect to maxillary left central incisor (Figure 6). Single-visit endodontics was performed for the involved tooth (Figure 7). The tooth was intact and functional inside the oral cavity when patient came for recall visit after 1 month and is still under follow up. In most cases, a dens invaginatus is noticed by chance on the radiograph. Clinically important hints maybe, unusual crown morphology (‘dilated,’ ‘peg-shaped,’ ‘barrel-shaped’) or a deep foramen coecum but affected teeth may also show no clinical signs of malformation. As pulpal involvement of teeth with coronal invaginations may occur a shortly after tooth eruption, an early diagnosis is essential to instigate preventive treatment [11]. The invagination allows entry of irritants into an area, which is separated from pulpal tissue by only a thin layer of enamel and dentin and presents a predisposition for the development of dental caries. In some cases, the enamel lining is incomplete. Channels may also exist between the invagination and the pulp [12,13]. Therefore, pulp necrosis often occurs rather early, within a few years of eruption, sometimes even before root end closure [14,15] Other reported sequelae of undiagnosed and untreated coronal invaginations include abscess formation, retention of neighbouring teeth, displacement of teeth, cysts and internal resorption [16].

The treatments options include; prophylactic or preventive sealing of the invagination, [17,18] root canal treatment, [19] endodontic apical surgery, [20,21] intentional replantation [22], and extraction [23]. Some authors say there is association between talon cusp and dens invaginatus [18,20]. Nagaveni et al. [18] reported an interesting case showing the occurrence of three unusual anomalies within the same tooth of an Indian patient. These anomalies are talon cusp, dens invaginatus and short root in the lower permanent central incisor which is not reported previously. The literature shows isolated cases or prevalence of taurodontism affecting the permanent molars [24]. In the present report there was concomitant occurrence of dens invaginatus and tarudontism affecting the permanent molars was evident in case 1. In the first case, prophylactic sealing of the invagination was done for all four anterior teeth. In second case, root canal treatment was done for the symptomatic tooth.

The thorough knowledge of classification and anatomic variations of teeth with dens invaginatus is important for its early detection and management.

Copyright: © 2015 Nagaveni NB, et al. This is an open-access article distributed under the terms of the Creative Commons Attribution License, which permits unrestricted use, distribution, and reproduction in any medium, provided the original author and source are credited.