Copyright: © 2016 Davarpanah A, et al. This is an open-access article distributed under the terms of the Creative Commons Attribution License, which permits unrestricted use, distribution, and reproduction in any medium, provided the original author and source are credited.

Imaging technology into the well is the tools for logging system, interpretation of data obtained from the well and to create the image with high resolution from the wells. This technology creates an accurate image (screenshot tools and the vertical seismic) on structural characteristics, layering, fractures, faults, texture and secondary porosity play an important desirable role in describing the reservoir. In the carbonate reservoirsthat most of Iran reservoirs are included in this type fractures are the most important factor in the production of these reservoirs. In the fractured carbonated reservoirs faults and folds makes unwanted changes in the structure of these reservoir. Structural complexities occur at different scales. For example, major faults and the original boundaries between formations are visible on the surface seismic data. But small-scale changes and faults in seismic data cannot be determined and it is essential to use small-scale of data and information sources. For achieving to these purposes it can be combined the result of small-scale data such as internal wellbore seismic VSP (vertical seismic profile) that having separating power in meter limit and FMI (formation micro imager) imaging logs that having separating limit in centimeter limit that could be able to modeling structural complexities and distribution of fractures around well. It should be noted that identifying occurrences around the wellbore is very important in drilling, completion procedures and development programs. FMI (formation micro imager) logs can be directly determined the inverted changes of wellbore layers and formation structures and also was an important factor for stratifying layers and determining the lithology of oil and gas explorations that can be determined the wellbore fractures, inclination and direction by using its interpretation. Moreover VSP (vertical seismic profile) logs is the way that generated signals at the surface are received by the geophone at different depth levels in the wells, which by its interpretation; changes in wellbore direction, velocity profiles, faults with higher accuracy around the wells and fractures around the well can be determined.

Fractures are the properties of the largest oil fields in fractured in carbonate reservoirs. In carbonate rocks, tectonic forces, their dissolution, recrystallization and… so that, each can create fractures in the rock. Rock fractures can be created on the deposition time, but the impact of these fractures on reservoir properties of the rocks is very low. Natural fractures are as an important parameter in exploring and producing of hydrocarbons and most of the important oil and gas fields by the amount of production from fractured reservoir have been calculated. Fracture increases porosity and in the tight reservoirs [1] with the connection between the reservoir units in the field, to substantially increase the permeability. Fractures and cracks have a principal role in production rates and ultimate recovery amount from oil reservoir especially in carbonated formations.

The subject area can be classified into four parts:

Acoustic borehole-imaging devices are known as “borehole televiewers”. They are mandrel tools and provide 100% coverage of the borehole wall. The first borehole televiewers, operating at a relatively high ultrasonic frequency of 1.35 MHz, was developed by Mobil Corp. in the late 1960s [3,4].

Micro resistivity imaging devices were developed as advancement on dip meter technology, which they have mostly superseded. Traditionally, they have required a conductive borehole fluid, but it will be seen later that this requirement has been obviated by oil-based-mud imaging tools. Originally, in the mid-1980s, they comprised two highresolution pads with 27 button electrodes distributed azimuthally on each. This arrangement provided a coverage of 20% of an 8.5-in. [216 mm] wellbore in a single pass [5].

Electrical special resistivity Illustrator tools are electric tools by using a number of small electrodes are mounted on the pads, are able to measure the electrical conductivity of the borehole formation. Each pads covers a limited part of the well, so in the FMI (formation micro imager) tool, pads stands for the number of electrodes and increase logging coverage of wells (Figure 1). Factors that are created error in the image of electrical resistivity [6] (Table 1):

• Tools cohesion to the wellbore.

• Differences in the friction rate of pads with wellbore.

• Distances between Pads and receivers.

• Creating profit environmental noise and its effect on the image.

Data processing and correction of the FMI (formation micro imager): In general, image data should pass the stages of preparation, which includes the modification and processing steps that are listed below:

Synchronization: In imaging operations it must be taken that all of the electrodes to be stable environment, have the same answer. This means that the recipient must be matched to synchronized response. The data transfer can be rubber pads on the center of all the matches (Figure 2). 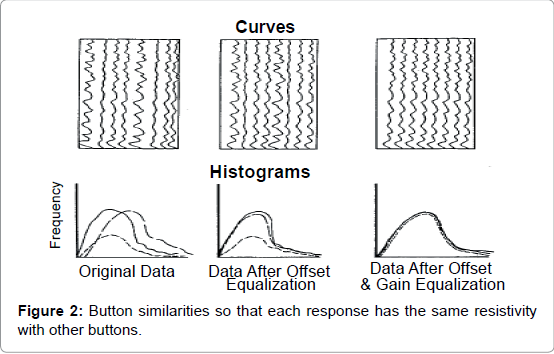 Figure 2: Button similarities so that each response has the same resistivity with other buttons.

Voltage correction: Although this correction is not required for electrical image logging but has an important role in improving image quality. While logging operation, it would be possible that used voltage was changed.

Principles of interpretation. Instructions below interpreted the images easily:

1) When observing and describing sedimentary structure and determine the slope, horizontal and vertical scale images must be equal. 2) When interpretation of enhanced images should be investigated as a reference to assess the range of normal static images visible. 3) When comparing the images with core images, just the boundary layer, thin layers, vertical fractures or in the well direction are common in both heterogeneous formations.

A) Review of discontinuities (Figures 3 and 4) 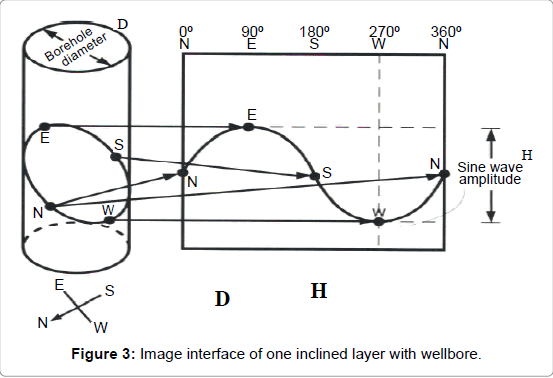 Figure 3: Image interface of one inclined layer with wellbore. 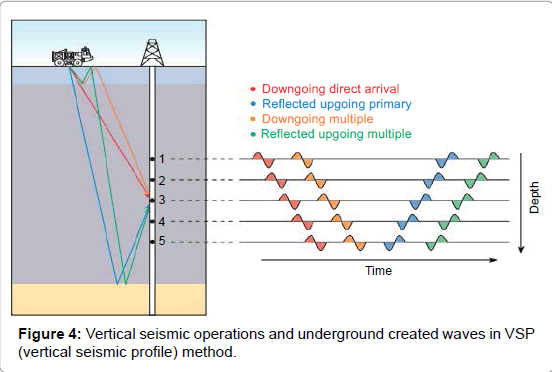 B) Review of fractures and cracks

Because FMI (formation micro imager) power illustrator was about a tenth of an inch (1/10), a large percentage of fractures and cracks can be investigated and the slope and fractures azimuth can be calculated. The principal measuring of VSP (vertical seismic profile). A seismic source are located in the surface and near to the wellbore. Produced signal are received from the sources by hanging zheo-phones in the well. Received data included rising and falling waves, thereby the seismic waves that had saved in each depth included in two parts. For separating the two necessary parts of the rising and falling signals it should be possible to be picked up in thick interval (50 to 400). Separation of rising and falling by using computers it can be conceivable.

Analysis of rising and falling waves caused to provide the possibility in changing seismic wave with the exact depth study. After that the earth acoustic specification can be interpreted directly by lithology qualifications and related geological properties.

Seismic source that can be air guns, water gun or even vibration size. Internal Zheo-phones and sensors in the well. Hardware and software equipment to process the received data.

Recording seismic wave in the well rather than relying on artificial seismic section. Measuring falling spectral content of seismic signal as a function of depth. Creating precise correlations between the results of surface seismic and logging, because seismic data have high vertical resolution. Recording signal with high frequency. Favorable seismic separation for stratigraphic properties around the wellbore like faults.

The primary use of VSP is the integration of VSP and down hole logging to surface reflection surveys [7]. Contrary to surface studies, which infer subsurface conditions from measurement of the reflected wave fields with the source and receiver at the surface, a VSP configuration involves closely spaced direct physical measurements of the wave field between the source position and the reflector (Table 2). 1) Construction of time versus depth curves with high resolution: in various VSP (vertical seismic profile) incarnations takes place from 3 to 7 milliseconds, so it can be converted time to the depth with high accuracy. This operation will not be applicable when sonic logs due to misappropriate conditions of the well. For example, in the low depths if formation velocity is less than 1600 m/s sonic logs cannot be withdrawn. In these circumstances, obtained velocity from VSP (vertical seismic profile) is the only possible measuring method.

According to the high accuracy of image logging tools through the well that investigate the details in the well properly and get appropriate results to the petroleum engineers and thereby, well internal seismic tools due to high separation power in the limit of meter (10-100) according to the surface seismic and combined the results of these two methods for investigating whit more details through and around the well can be influenced in many problems.

This method due to its limitations such as high costs and lack of other reductions has been less used.

In this part, one of Iran’s field has studied that has useful results for engineers that be paraphrased briefly.

First of all, VSP (VERTICAL SEISMIC PROFILE) and image logging tools have been studied separately. This action was done because effect of each result didn’t impact on other results. Therefore, each result compared to other results to field formation image can be seen properly (Figures 5-8) (Table 3). Figure 6: Applied static and dynamic images in the interpretation of structural profiles in the well number of 311 Ghachsaran formation. Figure 8: Final structural model of the well number of 311 Ghachsaran formation and the existence of fault in the asmary layer.

Results that was received by these two well structural techniques in the small scale showed that each technique had particular advantages.

For instance, VSP (VERTICAL SEISMIC PROFILE) can be described the far distances from the well. Distance depended on average decline of layers within well incline, and also used for detecting the length of faults improvements. But all the problems didn’t solve by this technique, because accuracy and resolution of these images were very low and the layers with high inclination and several azimuths didn’t receive to the zheo-phone. Thereby it affected on the image qualities and reflections. Nevertheless, FMI (formation micro imager) and FMS logs have images with very high accuracy images that the values of inclination and azimuth can be properly calculated. FMI data are also used in geo-mechanical reservoir analysis to identify drilling-induced features such as breakouts. Stress field analysis of FMI data provides critical information for controlling wellbore stability problems in the engineering of drilling. Furthermore, by combining of these both techniques from the lateral well, structural model has been designed. The special properties of the Vertical Seismic Profile, which allows the separation of the upward and downward travelling components of the recorded waveform, provides a means of studying the acoustic response of the earth in detail. VSP (vertical seismic profile) obtained figure and improvement of Asmary formation and faults along the wells. According to this model, 6 faults had broken wellbore so, exception of first fault F1 in the depth of 1270 meters that inclined to the south, the other 5 faults inclined to the north.