Copyright: © 2015 Kravchenko IA, et al. This is an open-access article distributed under the terms of the Creative Commons Attribution License, which permits unrestricted use, distribution, and reproduction in any medium, provided the original author and source are credited.

It was shown that the soft medicinal form with complex of mineral salts in the combination with low frequency and therapeutic ultrasound has high anti-inflammatory activity at the model of carrageenan-induced inflammation. The low frequency and therapeutic ultrasound can be used as a physical skin permeation enhancer for transdermal administration of mineral salts. The use of ultrasound and complex of minerals salts returns morphological and biochemical parameters of experimental animals blood to normal levels after the inflammation.

The ultrasound (US) is the physical factor, widely used in medical rehabilitation and balneotherapy, which has a direct therapeutic effect and can be used as a transdermal penetration enhancer when combined with drugs [1-3].

Therapeutic treatments with ultrasound can to cause the analgesic, antiseptic, vasodilation, resolving, anti-inflammatory and desensitizing effects. In the application area we can observe activation of the blood and lymph circulation, increase of the phagocytosis and the mechanism of general immunological reactivity activation.

Ultrasound has depolymerized effect on the densified and sclerotic tissue. It can be used for the treatment of scars, keloids, joint contractures, and increased vascular epithelial permeability. This is the basis for the joint use with drugs for the phonophoresis [4-6].

The influence of ultrasound on biological objects is determined by the state of the object and ultrasonic signal parameters. Therefore, the selection of the optimal ultrasound parameters is very important for obtaining the desired therapeutic effect, and improving the ultrasound therapy is an important task of medical acoustics [7].

Ultrasound is the powerful physiotherapy factor that has the thermal, mechanical and neuroreflex action. The ultrasound is used for penetration enhancement of the histochematic barrier and changing the functional state of connective tissue [8].

Together with other physiotherapy factors, ultrasound is widely used in the treatment of muscle injuries [9].

Previously we have studied the influence of the low frequency and therapeutic frequency ultrasonic ranges, (USlf and USther), respectively, by the model of the aseptic inflammation [10].

According to this study, it was found that low frequency and therapeutic ultrasound have anti-inflammatory properties. It was shown that during the treatment of low frequency ultrasound, parameters of blood cells of the experimental animals was at the range of the physiological norm, and by using USter these parameters were increased. It has been found that the use of US at the inflammatory process returns the level of total protein to the physiological norm.

On the Kuyal’nik sea coastal lake (the Odessa region, Ukraine) as the main factor in inflammatory process therapy is used coastal lake brine. Its both high heat conductivity, chemical and biological-active agents content cause the brine medical action. Biologically active substances of the brine play an essential role in hyperemia formation.

Was offered the optimal SMF composition and studying of its anti-inflammation activity on the model of carrageenan-induced inflammation at rats.

It was established, that developed SMF has the expressed antiinflammatory activity and has no side effects of NSAID treatment [11].

Based on this, the goal of our work was studying the combined uses of SMF, based on the Kuyal'nik coastal lake brine and ultrasonic therapy for reduces of experimental inflammation.

Studying of anti-inflammatory activity was performed on the model of the rat back limb carrageenan-induced edema [12].

The acute inflammatory reaction (edema) was generated by sub plantar (sub plantar aponeurosis) administration of 0.2 ml of 0.2% carrageenan solution. An animal functional state was observed over 10 days. Treatment of the affected limb carried out after 24 hours after phologogenic agent administration and then each day during 20 minutes.

For treatment the therapeutic US (device UZT - 1.01 Ф, 880 kHz, a continuous mode of operation, intensity-0.4 W/cm2) and low frequency US (the special experimental stand, 20 kHz, a continuous mode) has been used. At US therapies as the contact environment was used МЛФ on the basis of Kuyal'nik coastal lake salt. Was used the 5% ibuprofen ointment as the referent drug.

Four groups of animals were used for the test:

I. "Control" - the group with an induced inflammation without treatment;

II. "USlf. + SMF" – the group which was treated by simultaneous use of low-frequency US and SMF;

III. "USther. + SMF" – the group which was treated by simultaneous use of therapeutic US and SMF.

IV. "Ibuprofen" – the group which was treated by transdermal applying of ibuprofen to the inflammation place.

The interpretation of results was carried out on the basis of the dynamics changes of morphological parameters of finiteness (width and volume). The red and white blood cells levels and some changes of biochemical parameters (cholinesterase activity, seromucoides level, sialic acids and total protein) in the test animals blood were studied.

The influence of combined application of SMF and USther on the dynamic of aseptic inflammatory process has been investigated. Criterion the inflammatory process estimation was dynamics of width (Figure 1) and volume (Figure 2) the rat affected limb change. For comparison, the parameters of the control group (an inflammation without treatment) and groups, which was treated by etalon preparation - ibuprofen ointment were used (apply directly on the inflammation place). 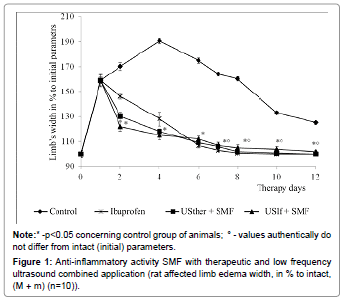 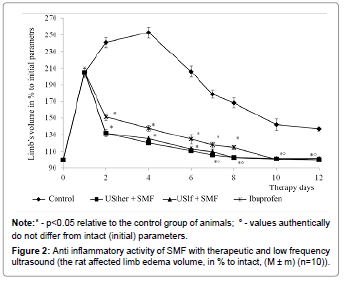 The results of change dynamic width affected limb of the rat, exposed to US treatment with combination of SMF in Figure 1 are submitted.

The maximum of the inflammation increment for experimental groups was during 24 hours after the phologogenic agent administration and consisted 60%. For control animal group the peak of inflammatory was marked for the 4th day and made 90% from intact parameters.

By results of investigation it is established, that already after the first combined use of the ultrasound with SMF on the basis of mineral salts complex, the edema width of the affected limb fast decrease (in comparison with control group approximately on 45 and 35% - for groups which treated with the use of low-frequency and therapeutic US, accordingly). During the first 4 days of an experimental inflammation we observed decrease (approximately 15-20%) of the inflammatory level of groups, which were treated simultaneously by SMF with US in comparison with ibuprofen ointment.

During the 6-12th days of experiment we did not observed statistically significant distinction between parameters of experimental groups and the group, which treated a referent-drug.

It is necessary to note, that during all experiment USlf antiinflammatory activity parameters practically do not differ from the similar for USther. It shows that on the model aseptic carrageenaninduced inflammation the low frequency ultrasonic influence has the expressed anti-inflammatory activity, which is not worse than US therapeutic effect.

Thus, it is shown, that at experimental groups of animals which were exposed to US therapies with the use of SMF, affected limb width already after the first medical procedure began to decrease sharply, and for the 8th day after phologogenic agent administration has achieved the initial parameters, whereas the inflammation at the control group of animals kept on high level, on 35% exceeded the width of intact parameters.

The change dynamics of the volume of the rat affected limb edema (Figure 2) during experiment is similar.

Parameters of the control group after 10th day exceeded intact parameters on 50%, and parameters of group, which were, treated ibuprofen ointment, did not differ from initial parameters.

It was established, that therapeutic and low frequency US can be used as the physical enhancer of skin permeability for the mineral salts complex for reduce the inflammation.

Biochemistry of blood plasma is an extremely important factor reflecting general progress of inflammation. Primarily, this refers to quantity and activity of plasma enzymes. Specific inflammation markers are also of interest. They are inherent to each type of pathological process. We have studied activity of plasma cholinesterase (CE), total count of plasma seromucoids (SM), sialic acid (SA) concentration and total protein (TP). The great role has dynamic change of formed elements of blood also.

Studying the dynamics change of white blood cells amount has been shown, that the use of application of SMF with the US facilitate the inflammation peak phase shortening (Table 1).

For groups, which were treated by SMF with USther and USlf already for the second day of experiment the tendency to the white blood cells level normalization up to the physiological norm level was observed.

It is shown, that the red blood cells amount usually was within the physiological norm limits, their slightly increased amount was marked only for control group (the 2nd, the 4th and the 8th days of the experiment).

In clinical practice the biochemical markers of inflammatory process determination methods are widely applied. At the pathological process presence in an organism the ChlE activity decrease is marked also. Also, at inflammatory processes as diagnostic and prognostic biochemical test use definition the SA, seromucoid and TP amount in the blood serum.

It has been shown seromucoids increase concentration (Table 3) in the blood serum of all rat test groups on second day of the carrageenaninduced inflammation.

It is shown that the use a therapeutic and a low-frequency ultrasound as a skin penetration enhancers for complex minerals salts reduced (starting from the 4th day) the concentration of seromucoids in the blood serum.

Results of investigation have shown, that SA level, after their concentration increase in a peak inflammation phase for all groups, comes back to normal parameters on the sixth day for groups: "Ibuprofen (ointment)" and "USlf + SMF". Parameters of SA concentration at the control group rat blood serum and "USther+ SMF" group stay high to the 10th day of research (Table 4).

From the literature it is known, that the decrease of the ChlE activity level in blood serum correlates with the intensity of pathological process in the organism [13].

As it is obvious from the diagram (Figure 3), ChlE activity was reduced in blood serum of control group animals in comparison with initial parameters: 15% (after 24 hours), 35% (after 2 days), 40% (after 4 days) and on the average 50% during the 6th-10th day of observation. 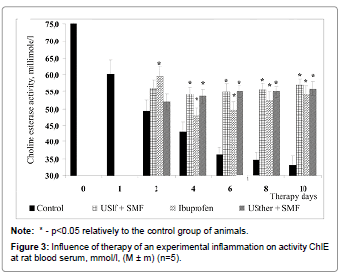 For all treatment groups the cholinesterase activity decrease (15% from initial level) was observed only during 24 hours after a carrageenan-induced inflammation.

The observation of the change dynamic of total protein concentration in blood serum showed increase of the concentration total protein during the peak inflammation phase (the 2nd-4th day), especially at the control group rat (Figure 4), this level was exceeded of physiological norm approximately on 30%. 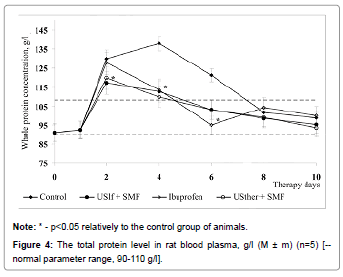 The total protein level at the rat blood serum was returned to parameters of physiological norm to the 6th day of inflammation for the experimental groups and to the 8th day for control animal group.

In summary, it was shown that the SMF with complex of mineral salts in the combination with low frequency and therapeutic ultrasound has high anti-inflammatory activity at the model of carrageenaninduced inflammation.

The low frequency and therapeutic ultrasound can be used as a physical skin permeation enhancer for transdermal administration of mineral salts.

The use of ultrasound and complex of minerals salts returns morphological and biochemical parameters of experimental animals blood to normal levels after the inflammation.