Copyright: ©2015 Abozor and Awad. This is an open-access article distributed under the terms of the Creative Commons Attribution License, which permits unrestricted use, distribution, and reproduction in any medium, provided the original author and source are credited.

Objective: To evaluate the weight of debris and irrigant volume extruded apically from root canals using the Revo-S system compared to that of ProTaper and HERO Shaper systems.

Methods: Sixty single rooted teeth were selected and randomly divided into three groups. Each group was assigned to one of the three instrumentation systems: ProTaper, HERO Shaper and Revo-S system. The canals were irrigated with a total of 6 ml of distilled water using a conventional needle. Apically extruded debris and irrigant were collected and measured.

Conclusion: The Revo-S system was comparable to the ProTaper and HERO shaper systems in terms of apically extruded debris and irrigant.

Chemomechanical preparation, by endodontic instrumentation and the use of intracanal irrigants, is an integral part of root canal therapy. During these procedures, there is always a possibility of pulp tissue fragments, dentine chips, necrotic tissue, microorganisms and intracanal irrigants being extruded beyond the apical foramen even when the working length is controlled [1]. The extrusion of debris apically may have the potential to disrupt the balance between microbial assault and host defense leading to the development of acute inflammation and flare-ups [2].

Studies have shown that instrumentation techniques utilizing a push-pull motion tend to extrude more debris than those incorporating rotational motions [3-6]. This has lead to the hypothesis that engine driven rotary instruments extrude less debris than hand filing techniques. However, rotary instruments can vary among themselves in their design, tip configuration, tapering, cross sectional geometry and number of files used. Hence, differences in terms of apically extruded debris and irrigant may also exist among various types of rotary instruments. Several contemporary rotary systems with different design are available in the market such as ProTaper and HERO Shaper systems.

In the ProTaper system (Dentsply Mailefer, Ballaigues, Switzerland), instruments have a convex triangular cross section design which decreases the area of contact between the rotary file and the dentinal walls. Also, ProTaper files have a non-cutting tip and a flute design that combines multiple tapers within the shaft [7].

HERO Shaper (MicroMega, Besancon, France) instruments have groove distances that are increased in 0.06 taper files, while the length of the cutting part is decreased in 0.04 taper files. The files have three sharp helical cross-sections [8].

This study was conducted at Ibn Sina National College for Medical Studies after obtaining the institutional ethical approval. Sixty single-rooted recently extracted human teeth were collected. The teeth were observed by 3.5x magnifying loops to verify that they had single apical foramina and were free of cracks. All teeth were analyzed with periapical radiographs in buccal and proximal directions for the presence of single canal. Those with open immature apices, calcification, resorption, anomalies, caries or previous root canal treatment were excluded. The teeth were also carefully selected to have minimal root curvature; only those with a curvature between 0 and 10 degrees as described by Schneider were included [10]. The soft and hard tissue remnants on the external root surfaces were removed with scaler and the pulp tissues were removed with barbed broaches. Then, the teeth were decoronated to allow access to root canal and establish a level surface at a stable and standardized root length.

A K-type file size 10 (Dentsply, Maillefer, Ballaigues, Switzerland) was inserted into the canal until its tip was just visible at the apical foramen, the length of the file was measured and 1mm was subtracted from this length to provide an optimal working length. The selected teeth samples were randomly divided into three groups, twenty teeth each. Then each group was assigned to be instrumented utilizing one of the following three rotary systems: ProTaper, HERO Shaper and Revo-S. The instrumentation process was performed according to the manufactures' instructions using the crown down technique. The files were used with a contra angle hand piece at 300 rpm at constant speed in a vertical position. Each set of instruments was used only for five teeth and discarded after use. Apical preparation was performed up to size 35 at full working length for all the canals.

Each canal was irrigated with a total of 6 ml of distilled water using a 30-gauge conventional needle, placed at full working length without binding. In order to maintain patency, a size 10 K-file was used to recapitulate the canal between files. Irrigation was performed at a constant delivery speed of 5 seconds per ml and the overflow was suctioned with a high-volume evacuator.

Each tooth was assessed for the volume of irrigant and weight of debris extruded apically by using an apparatus as described by Myers & Montgomery [11] (Figure 1). The teeth were fixed through a hole into rubber seal by impression material before canal preparation. A laboratory tube, pre-weighed to 10-4 precision microbalance (Sartorius Analytical, Gottingen, Germany), was placed into vial. Three consecutive readings were taken before preparation and the mean value was recorded. The rubber seal with the tooth was then fitted into the mouth of the vial. The apical part of the root was suspended within the laboratory tube, which acted as a collecting container for apical debris and the irrigant evacuated through the foramen of each root. The vial was vented with a 23-gauge needle to equalize the air pressure between inside and outside the vial. Once the canals preparation has been completed, the debris adhered to the external root tip was scraped off along inside of the laboratory tube. Immediately after canal preparation, the laboratory scaled tube was removed from the vial and the amount of irrigant was recorded according to the scale. The receptor tubes were taken to an incubator (FormaSeries II water jacketed CO2 incubator, Thermo electron corporation, USA) where they were stored at 37oC for 21 days until the debris was dry. Three consecutive readings were taken after preparation and dryness then the average value was recorded. All instrumentation and weighing procedures were carried out by the same operator.

Statistical analysis was conducted using SPSS statistical software for Windows (version 16, SPSS Inc., Chicago, IL). Data were presented as mean and standard deviation (SD) values for each group. Analysis of variance (ANOVA) was used to compare the mean dry debris weight and the mean irrigant volume among the three groups. The significance level was set at P ≤ 0.05. 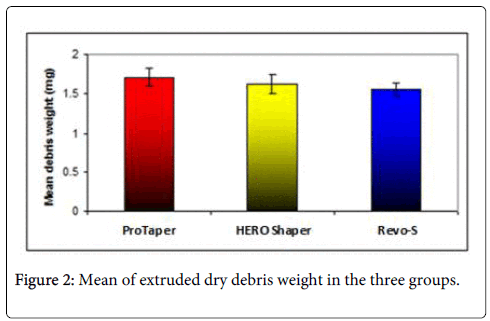 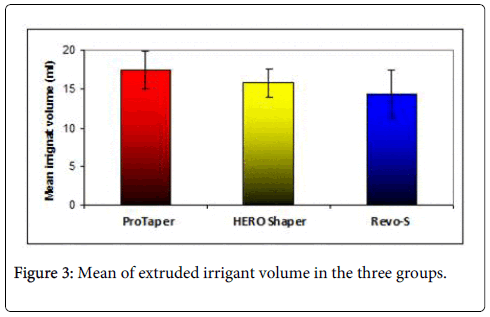 Figure 3: Mean of extruded irrigant volume in the three groups.

During root canal instrumentation many factors may affect the amount of extruded intra canal debris and irrigant such as instrumentation technique, instrument type and size and preparation endpoint [4,14]. In our study, the apical diameter of master apical instruments in all the groups was standardized at ISO size 35. The instrumentation process utilized the crown down technique and followed the protocol described by the manufactures. Needle type, needle insertion depth, delivery method of the irrigant, frequency of irrigation and apical preparation size had a significant effect on irrigant extrusion [15-19], which all were standardized in the present study. Hence, in the present study, the amount of irrigant was kept constant for all specimens, the irrigation needle insertion was determined at an established level and the irrigant was passively injected at constant delivery speed of 5 seconds per ml to minimize uncontrolled forces on the irrigation syringe. Distilled water was used as an irrigant solution in the present study to avoid potential increase in the debris weight due to formation of particulate matter associated with the use of other irrigants. Also, each root canal was irrigated with a total of 6 ml of distilled water via a 30-gauge blunt needle that had been placed into root canal without binding. A single operator prepared all the canals to eliminate inter-operator variability.

Furthermore, in the present study, pulp tissues were removed before instrumentation to ensure that the debris extruded was dentinal shavings only. However, the results of current study should not be directly extrapolated to clinical conditions because there was no simulation of vital pulp or periapical tissues that may act as a natural barrier and limit apical extrusion. The present study was limited to teeth having single canals with minimal root curvatures to avoid complications likely to arise during instrumentation of severely curved roots [8]. Hence, different results may be obtained from those with high curvatures. Moreover, the present study investigated teeth with mature root morphology only; hence, the present findings cannot be generalized to teeth with immature root development and open apices.

In the present study, a tendency toward less debris and irrigant extrusion was observed in the Revo-S group. This could be attributed to the design of the new Revo-S NiTi rotary system which features a unique characteristic, an asymmetric cross section, inducing a snake-like behavior phenomenon of the instrument along the canal. The asymmetrical cutting profile of the Revo-S instrument increases the available volume for upward debris elimination which may contribute to the production of less debris and irrigant extrusion apically. There was also a tendency toward a greater debris and irrigant extrusion in the ProTaper group than HERO Shaper which could be explained by the greater tapering of the ProTaper files than the HERO shaper files. These findings are consistent with previous studies that showed greater amounts of extruded debris with the ProTaper instruments when compared to other rotary instruments [8,16,20].

During endodontic instrumentation, every possible attempt should be made toward minimizing the amount of apical extrusion since the extruded intracanal debris and irrigant might contribute to the endodontic flare-ups. However, further studies may be needed to develop an instrument with a new design that might have a significant impact on reducing the debris and irrigant extrusion and therefore decreasing the incidence of post-instrumentation flare-ups.