Wheat is one of the major staple food crops providing 60% of calories and proteins to the human population. India occupies second position after China in the world with productivity of 87 million tones [1]. However, with increasing population size and growing demand for food grains there is a yield gap and urgent need to increase wheat production. The success of wheat breeding depends on several factors such as high yield potential, disease resistance and most crucially on the gluten protein fraction, which confers the visco-elastic properties that allows its dough to be processed into various (bread, pasta, noodles and chapatti) end products. Wheat consumption in India and neighboring Asian countries mainly takes place in the form of homemade chapattis (unleavened flat bread) and around 90% of total wheat produced is processed into Chapatti/roti as end product [2-4].

High molecular weight glutenin subunit (HMW-GS) plays a major role in determining the visco-elastic properties, thereby determining the quality of its end use products. Significant amount of work has been done to interpret the relation between protein and gluten contents, high molecular weight (HMW) glutenin subunit composition and chapatti making quality [5]. However, the information available on the role of protein fractions and composition on chapatti quality is conflicting and not very clear.

Ram and Nigam [6], earlier reported that equal amount of gliadin, glutenin and residue protein will give better chapatis. Payne Kolster and Vereijken [7] have reported 5+10, 1 and 2* as superior subunits which manifest better dough characteristics. Chapatti requires medium gluten strength which can be achieved by incorporation of HMW subunit 20 along with few other strong subunits at other Glu-1 loci [8-10]. It was found that GluB-1x20 together with GluA 1 null allele contributed significantly to the pliability of chapatti [11-13]. The high Glu-1 score is also correlated with good chapatti quality [12,14]. The Glu-1 quality score can be enhanced by assembling 2*, 20 in 5+10 or 2+12 subunit compositions through marker-assisted selection. The presence of HMW-GS 1Bx20 in varieties with good chapatti making quality such as C-306, C-273 suggests that subunit 20 alone or in combination with other subunits may provide a tool for screening of breeder’s material for chapatti quality. Hence, on the basis of these assumptions, allelic subunit compositions at the Glu-B1 locus are important in chapatti making quality and are important target in developing new lines with quality attributes in wheat breeding programs [15].

Previously, breeders have been selecting varieties with different allelic subunit composition and superior processing quality using various techniques like SDS and Zeleny sedimentation tests, mixographic evaluation, baking test and other methods. However, these methods are not useful for quality check at early stage of development as they are seed based destructive methods. They have found to give incorrect elucidation of the allelic differences [16] and not reliable. Therefore, it is essential to explore new methods which are inexpensive, rapid, reliable and require small amount of sample for analysis. PCR based DNA markers emerge as a new versatile tool in breeding which can easily overcome these constraints and make varietal selection more efficient, precise, rapid [17] and at an early stage of development.

Allele-specific (AS-PCR) markers employ primers designed from nucleotide sequences of the Glu-A1 , Glu-B1 and Glu-D1 genes. Primers used the complete coding region, including the signal peptide and designed from nucleotide sequences of respective genes. The amplification of the complete sequence of the gene is of interest in verifying the correspondence between protein size, as deduced from the coding region of the gene and that obtained by separating proteins using SDS-PAGE [18,19]. Therefore, this PCR approach could be very useful to infer that the obtained size of a HMW glutenin subunit band on agarose gel corresponds to its migration on SDS-PAGE, hence avoiding misleading results due to anomalous migration of few proteins [20]. These allele-specific primers can furthermore be designed from the conserved regions in wheat HMW-GS promoter and coding sequences. AS-PCR markers will also help in discriminating two subunits with same mobility on SDS-PAGE e.g., By 20* and by 20 [21].

Taking recourse to the above, the present study utilizes allelespecific primer analysis for distinguishing alleles at the Glu-B1 locus in 19 different bread wheat cultivars. The marker associated with 1Bx20 can be subsequently used in introgression of this subunit into cultivars with other desirable properties using marker assisted selection (MAS).

Table 1: List of varieties/genotypes used in this study for allele-specific PCR (AS-PCR) marker analysis and composition of their Glu-B1 subunits.

The upper aqueous phase in both steps was transferred to new tube after centrifuging for 15 min at 15,000 rpm. DNA was precipitated with 0.1 volume of 3 M sodium acetate (pH 7.0) and 0.7 volume of isopropanol. Finally, the pellet was washed with 70% and 100% double distilled ethanol. DNA was dissolved in a solution containing 10 mM Tris-Cl (pH 8.0) and 1 mM EDTA. DNase free RNase (5.0 μl of 10 mg/ml) was added and incubated at 37°C overnight to remove RNA. The quantified DNA was then kept at -70°C while working stock was placed at 4°C. The quality as well as quantity of DNA was estimated by agarose gel electrophoresis [23].

A small volume of DNA solution was loaded on 1% agarose gel along with a known amount of Hae III digest of Phi X 174 DNA molecular marker. The amount of DNA was then estimated by comparing the relative intensities of the DNA bands of samples and molecular marker. The comparison was done visually under UV light or by capturing the image in a gel documentation system using software, Gene Tools (Syngene Corporation, UK).

PCR analysis was done to amplify the coding sequence of Glu-B1x using allele-specific primers as previously reported. Primers were prepared on the basis of published sequences used for amplifying subunit 20 of Triticun durum . It used the complete coding region, including the signal peptide and designed from nucleotide sequences of respective genes [19,24-29].

With primer combination UTVF/UTVR, the templates carrying subunit 7 amplified fragment of 2373 bp which is same as expected from the nucleotide sequence information specific to this gene and the templates carrying subunit 20 amplified ~2500 bp fragment. DNA from cultivars with either subunit 7 alone or in combinations e.g., 7+8, 7+9 directed amplification of the Bx7 marker fragment, whereas varieties with subunit 20 amplified the Bx20 marker fragment. The same primer also gave specific fragment of expected size 2265 bp with subunit 17+18 but varieties with other subunits like 13+19 did not amplify any band (Table 1, Figures 1 and 2). 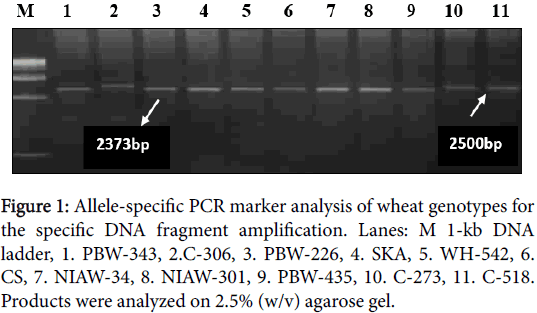 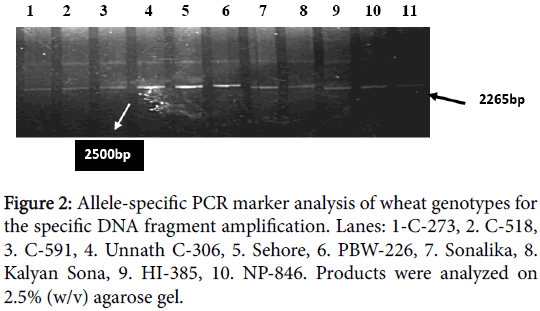 The wheat cultivars possessing different allelic composition at GluB-1 locus can be distinguished using allele-specific primer [25,26,29]. These primers are not only specific for genes but also for identical alleles of a given genes hence very useful for identifying genotypes. One of the major drawbacks of using SDS-PAGE for obtaining protein profile is that some functionally different HMW glutenin subunits, such as Bx7 vs Bx7*, By8 vs By8* or By20* and By20 which have similar relative electrophoretic mobility but functionally distinct cannot be clearly identified [30,31].

In triticale, alleles supposed to encode subunits By20 and By18 do not correspond to the wheat alleles with similar symbols. For those new HMW glutenin subunits, new names were attributed: By20* instead of By20 and By18* instead of By18. Allele-specific markers help in the discrimination between the alleles encoding By20 and By20* and By18* and By18 which are having different migration time on SDS-PAGE [21]. Although a large number of DNA markers are available for quality traits of wheat (Table 2) including a number of markers for Glu-B1 alleles none associated with 1Bx20 of Triticum aestivum. Shewry et al. [29] used the allele-specific primer developed by Anderson and Greene [25] for amplifying 1Bx20 in Triticum durum and reported 96% sequence homology between two alleles 1Bx7 and 1Bx20 of Triticum durum (pasta wheat).

Based on this it is assumed that this primer would possibly amplify the 1Bx20 gene of Triticum aestivum . PCR analysis was performed using allele-specific primers with the aim of amplifying complete coding region of the x20 (Glu-B1) genes. Also, the subunit 20 of C-306 which is bread wheat (T. aestivum) and other varieties amplified product larger than the products of the subunit 7 as well as that amplified by subunit 20 of durum wheat [29]. This gene was larger than subunit 7 and could be easily distinguished from amplicon of subunit 20 of durum wheat. It produced an expected 2373 bp fragment for the allele Bx7 and approximately 2500 bp fragment for Bx20. The variations in size, observed in two different allelic subunits were mainly due to variation in the length of the central repetitive domain, typical of these proteins. Deletions or duplications, probably caused by unequal crossing over, have given rise to size polymorphism. This marker is co-dominant and amplified different fragment sizes for different alleles suggesting specificity for various Glu-B1 alleles. Therefore, the same marker is helpful to discriminate the wheat varieties with different Glu-B1 alleles.

The allele-specific marker employed in the present study will be useful in varietal differentiation of bread wheat at early developmental stages on the basis of variation in Glu-B1 allelic composition. Marker for subunit 1Bx20 of Triticum aestivum will assist introgression of this subunit in wheat cultivars with high yield, disease resistance and other desirable parameters. It will also facilitate combination of subunit 20 with other subunits at Glu-A1 and Glu-D1 locus in breeding lines for selection of varieties with medium gluten strength for augmentation in chapatti making quality.

Copyright: © 2018 Rai RV, et al. This is an open-access article distributed under the terms of the Creative Commons Attribution License, which permits unrestricted use, distribution, and reproduction in any medium, provided the original author and source are credited.