Copyright: © 2014 Manabe Y, et al. This is an open-access article distributed under the terms of the Creative Commons Attribution License, which permits unrestricted use, distribution, and reproduction in any medium, provided the original author and source are credited.

Background: The purpose of this study was to determine the relationship between the head position and the subsequent ease of nasotracheal intubation by using lightwand device TrachlightTM (TL).

Results: Of total 300 patients enrolled in the study, TL intubation was successful in the patients of 91.3%. No correlation between the original scale and the head position was observed.

This study was designed to determine the relationship between the head position and the subsequent ease of nasotracheal intubation by TL.

This study was approved by the Institutional Review Board at the Fukuoka Dental College (Fukuoka Dental college, 2-15-1 Tamura, Sawara-Ku, Fukuoka, Japan, approved April 4, 2005, Approval number: 66), and written informed consent was obtained from each patient.

This study included patients (ASA 1 or 2) scheduled to undergo elective oral and maxillofacial surgery under general anesthesia that required nasotracheal intubation and the patients who had past history of the upper airway surgery and BMI>30 kg/m2 were excluded from the study. They were randomly assigned to three equal-sized groups (n=100) according to their head position for lightwand nasotracheal intubation: Group S intubated in the sniffing position; Group E intubated in the extension position; Group N intubated in the neutral position. The sniffing position was obtained by placement of a 9-cm cushion under the head of the patient [6]. The extension position was obtained by bending the head part of the bed at an angle of 30 degrees posteriorly and the neutral position was obtained by just lying on the flat bed without cushion (Figure 1). They underwent a preoperative airway assessment that included a Mallampati score [7,8] and mouth opening with the mouth fully opened (the interincisor gap was measured in millimeters) by an attending anesthesiologist. Demographics such as age, gender, weight, and height were also recorded. Each patient was routinely monitored during the entire procedure. A rapid-acting anesthetic (propofol, 1–1.5 mg/kg, or thiamylal, 3–5 mg/kg) was administered intravenously, mask ventilation was ensured, and vecuronium bromide (0.1 mg/kg) was administered. The nasal mucosa of both nostrils was disinfected and probed with absorbent cotton immersed in 10% povidone-iodine with 1:100,000 epinephrine and the wider patent nostril was chosen for intubation. Then, lidocaine jelly was used as a lubricating jelly for nasopharyngeal airway tubes, which had increasing caliber sizes to dilate the meatus of the selected nasal cavity. The laryngoscopy was performed in all cases by using a size 3 Macintosh laryngoscope blade for topical anesthesia on the supraglottic region and the vocal cords using 8% lidocaine spray. This process is standardized in our department [9]. Glottis visualization during laryngoscopy was assessed by using the Cormack and Lehane classification [10] by an attending anesthesiologist with at least 3 years of anesthesia experience. All direct laryngoscopy were performed in sniffing position.

Nasal RAE™ endotracheal tubes (NTT; Mallinckrodt, Glens Falls, NY) were used in this study. Each NTT was cut to the appropriate length so that the tube tip could be adjusted to the light source. The NTT was inserted with the TL after removal of the stylet (TL-NTT) (Figure 2) and soaking in warm sterilized normal saline to reduce epistaxis and nasal damage [11]. The TL-NTT was inserted into the nostril and advanced until light was seen in the oropharynx. After further advancing, a blurred light was seen in the sub-mandibular area. The TL-NTT tip was maneuvered anteromedially until a bright spot of light was seen at the cricothyroid membrane (Figure 3); the TL was then withdrawn and the NTT advanced into the trachea. The cuff of the tracheal tube was inflated with air at the peak airway pressure of 25 cm H2O immediately after intubation to prevent leaks. The location of the NTT tip was confirmed by palpation of the pilot balloon at the level of the suprasternal notch and by capnography. If the intubation was not performed within 60 s or a decrease in arterial oxygen saturation by pulse oximrtry below 98% was observed, the TL was withdrawn, the opposite nostril and mouth were covered by hand, and ventilation through the NTT was resumed. Three attempts were permitted with ventilation interposed. If the TL intubation was unsuccessful after three consecutive attempts, intubation was performed using direct laryngoscopy. Only one anesthesiologist with 20 years’ experience who was blinded to the preoperative assessment and Cormack and Lehane classification results performed all of the intubations using TL. Intubation difficulty was assessed by the original 6-point scale (Table 1). The number of attempts, the total intubation time, and the failures of the TL intubation were recorded by another anesthesiologist. The total intubation time was defined as the sum of all intubation attempt durations, but the total time of interposed ventilation was excluded. The duration of each attempt was defined as the time from inserting the TL-NTT into the nostril to the time when the TL was removed from the NTT. Figure 2: Preparation of TrachlightTM. Nasal RAETM tube was cut to the appropriate length so that the tube tip might be adjusted to the light source. 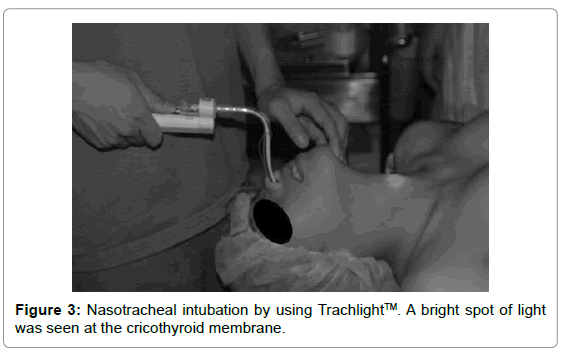 Figure 3: Nasotracheal intubation by using TrachlightTM. A bright spot of light was seen at the cricothyroid membrane. 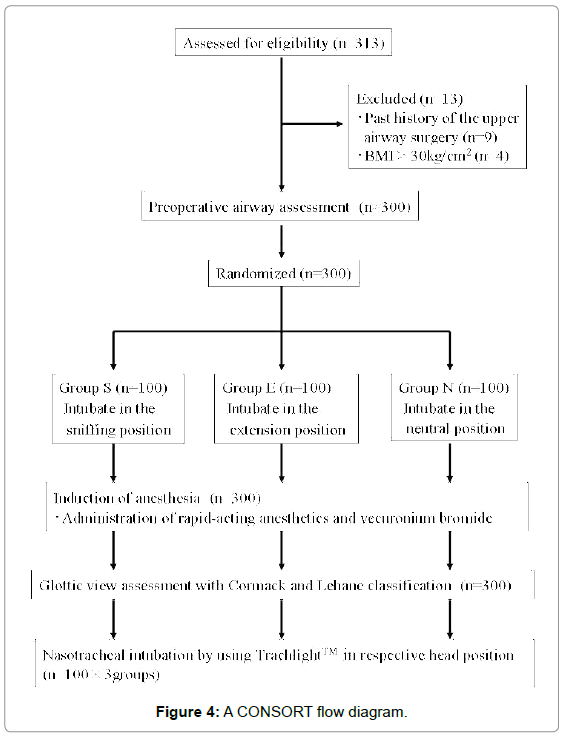 Table 4: Distribution of Mallampati score in each Head position. Abbreviations same as Figure 1.

Table 5: Distribution of Cormack-Lehane grade in each Head position. Abbreviations same as Figure 1.

Nasotracheal intubation using TL has been performed in several cases and a number of institutions use TL as the first choice of orotracheal intubation method [13]. In “Difficult Airway Algorithm” of American Society of Anesthesiologists [14], TL is also shown to be one of the instruments used as an intubation method for patients who are easy to ventilate manually but found to have difficult laryngoscopy after induction of anesthesia. Park et al. [6] reported that the laryngoscopic view with the 9-cm pillow was significantly superior to that with other pillows and without pillow; therefore we applied 9-cm cushion to the sniffing position. Hung et al. have reported that TL should be avoided in patients with known anatomical abnormalities of the upper airway [15]. Therefore, postoperative patients, who had anatomical abnormalities of the upper airway resulting from oral surgery, were excluded from this study.

Nasotracheal intubation by TL is unsuccessful when the tube is inserted into the esophagus or when the tube is lodged in the tissue surrounding the epiglottis and cannot be advanced into the trachea. In the former case, it is often possible to insert the tube by extending the neck to raise the tube tip. When it is difficult to perform the intubation in this manner, changing the tube to the Endotrol tube is contemplated [19]. However, during oral and maxillofacial surgery, the use of the RAE™ tube with suitable flexion is encouraged because the connector of the anesthetic circuit and the tracheal tube disturbs the sight of the surgeon when it is located above the patient’s nose. Iseki et al. [20] have reported that the tip of the tracheal tube can be raised by the alteration of the TL; however, this method cannot be applied to the RAE™ tube. In clinical condition, we raised the tip of the tube by the tracheal tube cuff inflation technique [17] and had good results. This technique is reported to increase the success rate of blind nasotracheal intubation.

Management of the case wherein the tube cannot advance into the trachea is more difficult. In such cases, we try various head positions; however, most of these cases came to be “unsuccessful” cases.

In case of intubation using a lightwand, the advantage is that the precise position of an endotracheal tube tip is known by checking the light at the sternal notch [21]. Since the length up to a bent part of the RAE™ tube is provided, it is necessary to set an appropriate fixed length.

There was no correlation between the airway parameters and the time required for intubation using the TL.

In other words, nasotracheal intubation using TL was not influenced by anatomic variability in this population.

In addition, intubation using TL is a light-guided technique without visualization of the laryngeal structures; therefore, there is a potential risk of trauma to the upper airway associated with its use, but there were no adverse outcomes in this study.

Our study has several limitations. First, all intubations were performed by one operator; therefore, the results may be biased towards the expertise of that operator. However, patients were unintentionally sampled so that the head positions could be equally dispersed through the study period, and this operator had a great deal of experience in nasotracheal intubation using TL from the beginning of this study. Second, premedication or anesthesia methods were not unified. Nevertheless, all patients had 0.1mg/kg of vecuronium bromide; therefore, we consider that the difference in anesthesia method could be ignored.