Copyright: © 2015 Azizova B. This is an open-access article distributed under the terms of the Creative Commons Attribution License, which permits unrestricted use, distribution, and reproduction in any medium, provided the original author and source are credited.

As you know, one of the signs of quality artistic works of architecture is considered to achieve harmonious unity of parts and the whole design of buildings. This is established by harmonization of geometric proportions and architectural forms.

The ancient builders of the Middle East and India possessed distinct mathematical knowledge, methods of measurement and establishment of proportionality with multiple preferences for small quantities and basic geometric constructions, which have been further developed in the middle Ages in Central Asia. In particular, the use of harmonization of geometric methods of the architecture of IX - XV c. is widely sanctified in the writings of MS Bulatov, PS Zahidova, KS Kryukov, LI Rempel, GA Pugachenkova and others. But the further condition of this issue by the example of architecture XVI - XX c. has worked poorly. Especially, the use of harmonization of geometric methods and proportioning architecture of Khiva (XVI - beg. XX cc) had not been studied.

To fill this gap, we have studied the principles of harmonization and geometric architectural proportions of madrassas Bikadzhan-Bika, located in Dishan kala (outer fortress) of Khiva.

According to local legend, the construction of the madrasah was started by Khan, nobleman Rahmatullah Yasaul-Boches, but when elevated to the level of basement waterproofing, funds were not enough for next four years. Finishing the building was taken by Bika-jan-Bika, a sister of Khan Madraimov II, who said that he wanted to leave a memory. His mausoleum belongs to the XVI century [1].

I honor those, who built the complex of Usto Avul, which is preserved by oral tradition of passing by generations.

The complex is oriented to the north of the main facade, with a single-story madrasah, which is square in shape at the right of the spot in general view, but with a cross-court arrangement with asymmetrical composition of the input group. There are three-parts of entry through the lobby with a clearly organized crankshaft. It passes by the series of dome compartments. Audience extended two niches, with the runoff is in the west, blocked beam roof, domed mosque - cruciform in plan through four broad flat niches. Inputs from the lobby are not in the center of the public rooms, and shifted to the main facade through the development domed bays cranked passage. The mosque is covered sphero -conical massive dome on arched sails [2].

Area under residential cell-hudzhras madrassas is used very efficiently: rectangular hudzhras stretched to proportions of the two squares in the direction of the minimum size of the yard, treated with traditional arcade niches entrances hudzhras; a beveled corners of the court with faceted niches placed in a pair of inputs hudzhr- corner, increased in size and numbers.

The main north facade is designed by the structure of guldasta. The portal and guldasta interspersed with green "bows" (Figure 1). Minaret is located four meters from the portal, almost in the center of the main facade (Figure 2). Figure 2: General view of mosque with its minaret.

This surprised us, and soon we came to the conclusion that it was the result of the general construction of the shape of the building based on a single module. Thus, the circle center of the minaret was found through the angles of the facade of the two arcs of radius equal to the distance from the corner to a point on the hypotenuse of the triangle of the main taken as thus, a key element of the module (Figure 3) [3]. Playground located to the west, before the mosque was busy probably a later addition to flat-beamed ceiling, in which the second placed barns mosque prayer hall which served not only for madrasah students, but also for the residents of a neighboring district. The barrel of the minaret is sharply reduced in diameter, making at approximately one-third of the top of the diameter of the base. Boxes indicate the presence of the camera at the top of the minaret. The trunk is the traditional lined polished brick and dismembered several decorative belts as Dandan, rhombs and steam masonry with "ribbons". The distance between the belts increases with height, facilitating visual perception scale. Three-row brick minaret crowned Sharaf. Town Planning the minaret opens himself a series of verticals, arranged along the main street of Khiva city.

The mausoleum was a three-chambered, with Ziarat-Hanoi and two tombs her. Preserved only Ziarat Khan in a domed building with a projecting portal.

The ratio of the width of the facade of the madrasa to the diameter of the minaret is 1:

Medieval geometry and architecture of Central Asia was known for its principle of two geometric harmonization: analytic and geometric. XV c. scientist of Jamshid Giasiddin Kashi gives the following analytical principle of finding the "golden section": "To divide the number (mean and extreme relationship), multiply it by itself, add to the product of a quarter of the work, take root from what happened, and subtract from it from half that number. What's left, and there is a large part of”. The second principle of Jamshid Giasiddin Kashi and following estimation can be calculated both analytically and geometrically:

It is known that the so-called "z-section of Olot" - it is proportional division of the interval into unequal parts, in which mass of whole segment applies to most of the way she relates to most of the smaller; or in other words, a small segment refers to the more so as more minutes to all (Pattern 1).

Practical acquaintance with the “golden section” begins with the division of the segment with a compass and a ruler as follows: 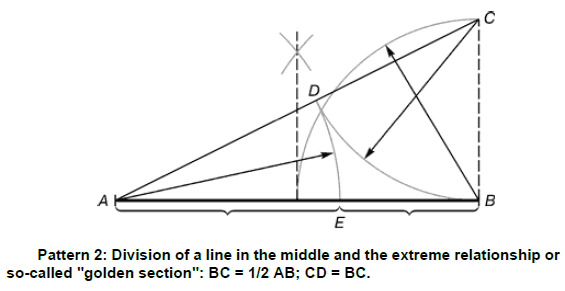 Pattern 2: Division of a line in the middle and the extreme relationship or so-called "golden section": BC = 1/2 AB; CD = BC.

Pattern 2 indicates the geometric method of constructing the "golden section". To this point, and ‘h’ in the perpendicular output equal to half AB. The resulting point from connected to the point A. On the resulting line segment postponed Sun, gets the points D. The length AD transferred to the direct AB. Obtained at this point E divides the segment AB in the ratio of the “golden section.”

The solution to this equation:

(Figure 4) With explores noted that "s section of Olot" provides the most tranquil aspect ratio of various proportions. One example of its application in practice average architects Khorezm is a madrasah Khiva Bikadzhan-Bika.

This ratio was featured us in analyzing the geometric construction of the Juma Mosque in Khiva and the method comes from the times of the famous mathematician, one of the nicknames is founder algebraic science Mohammed Al Khwarizmi. The basis for the construction of the mosque plan was adopted by a square with sides of equal width the mosque - m h. 44, 78 m. h 44,78 m., which forms the basis of the module. Module length is determined by the difference of the original square and side and twice the length of the difference his hand and half-diagonal:

This module is the equal-side octagon inscribed in the original box, which is known from the works of the founder science of algebraic Muhammad Musa al-Khwarizmi (VIII - IX) and has been widely applied for the transition from the square in eight dome areas (Figure 6). Next module is a semicircle by constructing a right triangle with an aspect ratio of 2, 3, √ 5 was divided into three equal parts. The resulting segment defined twice the distance column pitch mosques and equal width of two skylights. This section divides the plan mosque into sub-module 7:9; Application of this technique among Central Asian architects is best known in the works of Bulatov (Figure 7). Figure 7: A fragment of the carved door of Juma Mosque in Khiva city.

Length difference of the mosque and its width determined compositional axis of the main entrance to the mosque. Seemingly complicated these calculations are very simple in its geometrical construction. Some of these techniques are known by the example of the architectural monuments of Old Urgench, the ancient capital of Khorezm. This can be seen by the example of madrasahs Bikadzhan Bika.

As it is clear from our analysis, the overall construction plan, FAS held with the inclusion of the minaret, it indicates a common, unified system of calculations on the basis of a right triangle. Thus, the history of architecture in Uzbekistan can be replenished with new data that the architecture of the Khanate of Khiva, too, has been widely applied methods of the geometric harmonization.

The biggest medieval madrassah in Khiva, the Madrassah of Muhammad Amin-khan (1845-1855) is located opposite to Kunya-Ark at the gates of Ata-darvaza. Its area is 78x60 m. The Madrassah has 125 hudjras and could receive up to 260 pupils. The portal is crowned with five domes and flanked by corner towers [4].