During drilling, it is important to get enough information on the formation to be drilled in advance for optimizing drilling bit selection [1], lost circulation prediction [2], drilling parameter optimization, shale problem prevention, and wellbore stability issues. With increasing complexity in the formations to be drilled, lithology prediction becomes crucial to drilling bit optimization [3]. The most common and costly drilling problem that has been always experienced by drilling engineers is the loss of circulation. It imposes huge expenses to the oil companies because of either drilling fluid supplement or subsequent drilling problems like pipe sticking [4]. Also wellbore instability is one of the important issues that can be vital when active shale layers are presented in the wellbore. Each one of these problems can cause spending millions of dollars to cure. It is known that there are close relationships between formation lithology and log data [5]; however, it is impossible to get well-defined expressions, due to high nonlinearity and complication in their relationships. The conventional methods provide inaccurate means to make lithology prediction under these conditions [3,5-8].

Neural network can establish complicated non-linear mapping between inputs and outputs. Using a neural network, we can compound the simple non-linear function by N times to get the conversion between complicated functions. A Back-Propagation (BP) network, one of the most common neural network structures, with strong learning ability, fault tolerance and anti-jamming ability, can be used to analyze the relationships between lithology and real-time drilling data. In this paper, formation type and lithology of the formation were predicted using real-time drilling data with an acceptable accuracy.

Several methods have been developed for finding formation type and lithology during or after drilling. One of these methods is collecting cutting from the shale shaker and having them analyzed by geologist. In this method, it is not possible to determine lithology exactly when a rock is being drilled and in fact one can determine the lithology after reaching cuttings to the surface. But in some situation by specifying the formation or lithology we can prevent some of drilling problems. For example when formation changes from a high pressure one to a low pressure one, it can lead to kick and blow out if this change is not determined very soon.

Another method for determining lithology is using logging. Also it is clear that we can run a log after drilling a hole and the problems previously mentioned still exists. Another method is using from near well data. Although this method is better than the former ways but it can be accompanied by some great uncertainties.

In this work, we introduce neighbor well data in conjunction with real-time drilling data of current well to artificial neural networks to find out formation type and lithology of a layer exactly when it is being drilled.

Artificial Neural Networks are loosely based on biological neural systems, in that they are made up of an interconnected system of nodes [9] and recently have attracted widespread attention [10]. It can be tracked back in researches to the early 1950s by McCulloch et al. [11]. Rosenblatt [12] has invented the perceptron and approximately at the same time, Widrow [13] developed a similar network called Adeline. Afterward, Minskey et al. [14] showed that even lots of elementary calculations cannot be solved by single layer perceptrons.

Rosenblatt [12] also studied structures with more layers and believed that they could overcome the limitations of simple perceptrons. However, no learning algorithm was known yet that could determine the weights necessary to implement a given calculation and most of the computer science community left the neural-network paradigm for 20 years [15]. But in the early 1980’s, Hopfield et al. [16] revived neural-network researches coinciding with introduction of new learning algorithms such as back propagation. Improvement of neural network is continued till now with proven capability of simulation of very complex phenomenon.

Figure 1 shows schematic of a bipolar neuron that contains a cell body, dendrites, and an axon. Dendrites are the input strand of the neuron. Information in form of signals come through dendrites and after performing some activities, response will be delivered to the next neuron by axons. Human brain contains 10 to 500 billion neurons [17] they are classified to different modulus with distinct responsibilities [18]. Figure 2 shows mechanism of a neuron and Figure 3 reveals connections between neurons in a network. 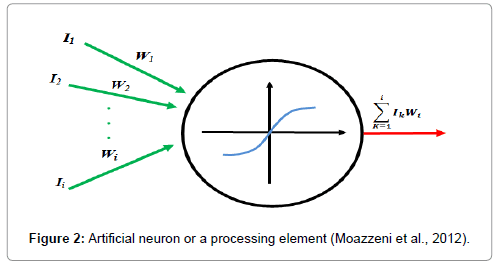 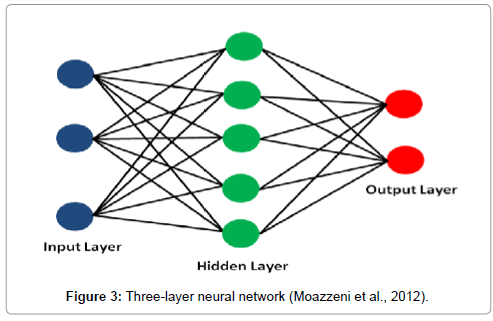 47500 sets of data from 12 wells in South Pars gas field (in south of Iran, Figure 4) were selected. After quality control and data mining, we selected the following parameters as the most effective parameters for finding lithology: present driller depth, drilling rate, torque, weight on bit, Round Per Minute of bit (RPM), pump pressure, pump output, bit size, bit type (not a quantitative parameter, so we used four columns in that the first one represented PDC bits when it was 0 and cone bit if it was 1, with the remaining three columns showing IADC code for the used bit), length of drilled interval for the current bit, lifetime of the current bit (this parameter with conjunction of the previous parameter can better show dull bit grading), mud weight, and Total Flow Area of bit (TFA). In the next step 4 main lithologies were detected in the encountered formations; that is, limestone, dolomite, shale and anhydrite or clay. A column was allocated to each lithology. The first column represents limestone; the second one dolomite; the third one shale; and the last one clay or anhydrite. 0 in the first column shows that there is not limestone under the bit and 1 shows that rock under the bit consisted of limestone.

So the output of the network would be a five digit code (Table 2) that first code shows the formation type and can be between 1 and 24 and the other 4 digits represent lithology and can be 0 or 1.

Transferring of data to the network

As shown in Figure 3, a BP network is made up of three layers: the input layer, the output layer, and the middle “hidden” layer [20,21]. In the conventional BP network, the numbers of input nodes and output nodes are determined by the numbers of the input and output parameters, respectively [22,23]. Generally, there can be any number of hidden layers. With a multi-hidden-layer network, a small number of weight adjustments are needed for the network to learn the knowledge of the training samples and store them in the form of the weight distribution. However, theoretical studies indicate that if one single hidden layer has enough nodes, the identification precision needed can also be reached, so one-hidden-layer network is used for simplicity [24]. In the BP network, the commonly used activation function is the Sigmoid function and can be written as follows [25]:

Also in some situations PURELIN and TANSIG activation functions might be used which they can be defined as follows, respectively:

After gathering required data, data mining and quality control, all data were normalized for better consistency. On the other hand, target of the network was also normalized.

For performing this research, after numerous trial and errors, a three layers feed forward back propagation network was utilized with TRAINLM training function and LEARNGDM adaptation learning function. Input layer consisted of 16 parameters and had dimension of 16 and dimension of output layer was 5 and the hidden layer had 30 neurons. Transfer function in the layers 1 and 2 were TANSIG and for the last layer it was considered as PURELIN.

Normalization is usually used in the BP model because the input and output parameters may not fall in the range of zero and unity.

About 70% of input data were taken for network training, 15% for network testing and the rest for validation of the network. Figures 5, 6 and 7 show network results for training, testing and 0.87 which demonstrates that network results will show good compatibility with real-time data from field. Figure 8 compares real formation versus predicted formation by the network. As seen in Figure 8, drilled formations were predicted by the network with great degree of accuracy. Results indicated that formation lithology can be predicted while drilling using available real-time drilling data, thus reducing some important drilling problems such as loss of circulation, stuck pipe and kick. This prediction capability can be used for compatibility between formation and bit and can improve bit selection program and drilling rate optimization. Also, accurately predicting of lithology would help geologist with cap rock prediction and would reduce the risk of drilling this layer. 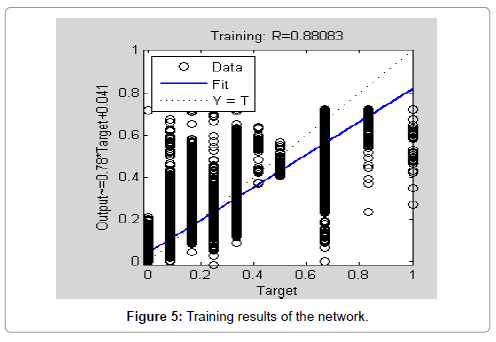 Figure 5: Training results of the network. 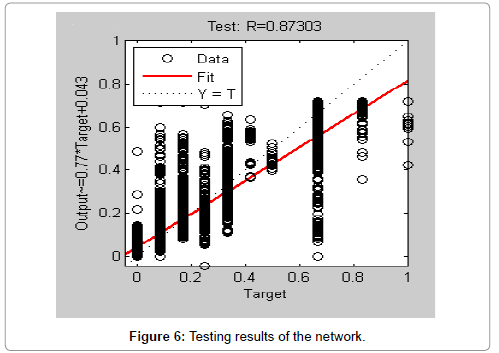 Figure 6: Testing results of the network. 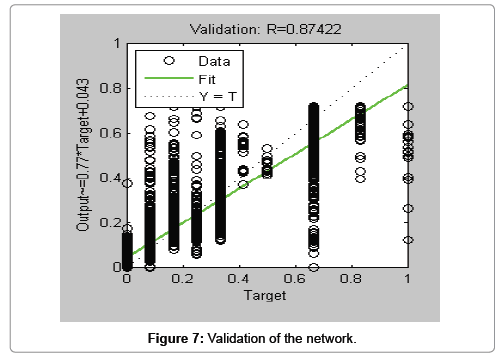 Figure 7: Validation of the network. 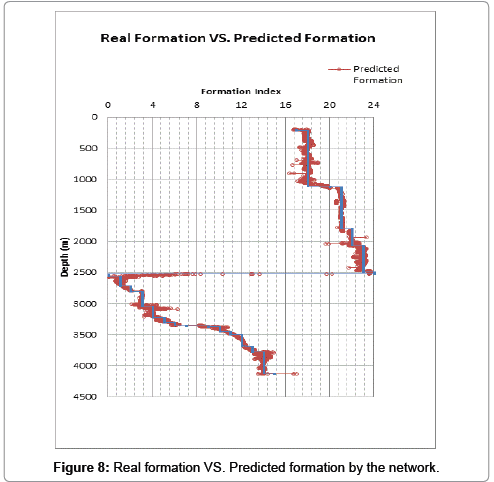 Figure 8: Real formation Vs. Predicted formation by the network.

1. Real-time lithology prediction could be very useful while drilling owing to the chance of controlling lots of drilling problems such as loss of circulation.

2. A methodology was proposed for prediction of formation type and lithology in any coordinates of field using operational data.

3. Proposed methodology is based on artificial neural networks whose ability to solve complicated problems is proven.

4. Before utilizing any neural network, data mining and quality control should be performed on available data.

5. Neural network helps to have accurate prediction of formation and lithology in South Pars gas field.

7. Prediction performance depends on sample data, when prediction is made in other regions, the model should be retrained.

Copyright: ©2015 Moazzeni A, et al. This is an open-access article distributed under the terms of the Creative Commons Attribution License, which permits unrestricted use, distribution, and reproduction in any medium, provided the original author and source are credited.