Thaba Nchu is small town in the Free State province of South Africa which forms part of the only Metropolitan Municipality in the province. This small town is part of the three towns that form the heart of Mangaung Metropolitan Municipality. Given the 10th September 2015 declaration of drought disaster in the Free State province of South Africa, we found it imperative to conduct a study on the agricultural drought economic impacts on both small and large scale businesses since people living in this region are more vulnerable to those in Bloemfontein (Free State capital). Following a study conducted by Hlalele which revealed the main source of vulnerability of Free State residents being of demographic nature. The aim of the study was to alert government authorities of the prevailing conditions of drought impacts for possible drought relief assistance. We used quantitative methods in the study where survey questionnaires were used in the data collection. The study revealed a high impact of drought in this region with over 80% of the businesses both formal and informal having lost over 50% of employees and revenue.

To date, an economic growth has been such a main policy challenge in the developing countries such as South Africa. Many studies have revealed that the world’s climate has already changed and will definitely change drastically in the near future giving rise to global warming that lead to increased frequency and intensity of weather events such as droughts [1]. In addition to this, about 79% of the surveyed people from the main eight research sites are reported to perceive climatic changes such as, droughts, floods, fluctuating rainy seasons, dry spells as well as more intense rains [2]. On the contrary, in a research commissioned by the Food and Agriculture Organization of the United Nations (FAO) to review the status of development and implementation of the Drought Risk Management Plans, for agricultural sector over the entire Caribbean countries only 6 out of 19 countries were found to be having draft plans [3]. Of those countries with draft plans, there is still a need in the development of both short and long term measures [4,5]. In Africa, Uganda is one of the many African countries whose livelihood is undermined the adverse effects of climate change with low adaptive capacity [6]. The monitoring and assessment of drought conditions at various scales, dimensions and timely information dissemination constitute a vital component of drought risk management [7]. However, of the four types of drought, agricultural drought is the least researched type thus the least understood [8]. From this statement, our study sought to assess the economic impacts of agricultural drought on several business entities ranging from, butchers, vegetable street venders and retailers in order to increase the knowledge base of the agricultural drought research. This follows a declaration of the Free State in South Africa which according to Hlalele et al. [9] has a 100% spatial extent with severity levels increasing from the northern to the eastern parts of this province.

According to IFRC [10] Vulnerability; is defined as diminished capacity of an individual, group or a system to anticipate, cope, resist or even to recover from an impact of either a natural or manmade hazard. Hazard refers to a dangerous condition, substance or a phenomenon that may lead to loss of life, health impacts, injury, property damage, loss of livelihood, socio-economic disruption as well as environmental damage [11]. Therefore from the above definitions, drought is previewed as a hazard that disrupts the livelihood of South African since Free State is said to be one of the main staple food (maize) producers in the country. Disaster is defined as a serious disruption of the functioning of a system, community resulting in a widespread of adverse effects that undermine the available resources of that particular system [11].

According to Salamia et al. [12], the 1999-2000 droughts in Iraq caused a damage amounting to US $1605 million of direct costs and having a 12.7% reduction in the animal products. This also had a significant reduction of 4.4% of GDP. In South Africa, in a study undertaken by Theunissen [13] when comparing the drought impacts of 2003 and 2004 in results showed; wheat yield was 39% lower, area planted 12% lower, major dam water levels 25% lower with other dams completely empty. About 5% of South African economy is attributed by forestry; therefore drought events have negative impacts in slowing down the trees growth [14]. The following are some of the drought economic impacts as shown by the Department of local government [15]; decreased land prices, loss of agriculture dependent industries, loss of unemployment from drought-related declines, strain on financial institution on credit risks and reduction in economic losses.

Economic and fiscal impact of drought in South Africa

Drought had very negative impact on commercial farming around 1991/1992 in South Africa. This was a result of low rainfall and inadequate capacity of range lands to support grazing and shortage of drinking water for livestock. Although the Agricultural sector contributes minimal to the Gross Domestic Product (GDP) it plays a very essential role in the wealth creation in South Africa especially in rural areas employing more than one million people.

Economies of many countries in sub Saharan Africa are particularly vulnerable to the effects of drought because they depend on rain fed agriculture, and low levels of income per capita. In 2007/2008 government of South Africa spent R285 Million on drought relief of which R20 Million and R25 Million were allocated Eastern Cape and Free State provinces respectively [16].

Other consequences of drought

Droughts have the most severe impacts of all natural disasters. Due to high levels of poverty, civil unrest, inadequate institutional capacity, population increased, climatic change, high rate of HIV/AIDS are key factors increasing the vulnerability to the dangerous impact of drought [17]. During dry seasons, there is generally a decline of rainfall. The impact of drought is normally felt across sensitive sectors such as water, food, and energy with a widespread impact on agricultural produce [18]. Majority of farmers and poor rural communities, their livelihoods depend solely on producing food for the country. Low rainfall has a direct impact on agriculture, since most of agriculture depends on rainfall. It is reported that most sub-Saharan (SSA) Africa experience less than 500 mm. Furthermore, other important impact of drought is literally on loss of livestock that is caused by loss of land, crazing land due to soil erosion or loss of vegetative cover. Livestock is an important integral part of farming in South Africa [19]. According to UNEP [20], drought can bring the worst in the affected communities in terms of famine and increases in the food and other important commodities, slow economic development and political disorder [21].

Relationship between drought and climate change 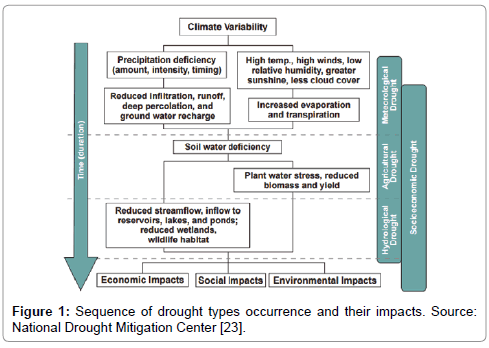 The study was conducted in Thaba Nchu town where fifteen businesses ranging from formal to informal businesses. We focused only on agriculture dependent sector or sections to assess the possible economic impacts of the current drought disaster in the South Africa, especially Thaba Nchu town. Of the formal agriculture dependent businesses, there are five such businesses in town. There are sixteen informal (fruits and vegetables stalls) businesses. For the purpose of this study we collected data from five formal and ten informal businesses making a total of fifteen businesses. From each business, a representative was selected to fill the survey questionnaire. Data was captured in Microsoft Excel for analysis. Resulted were presented in frequency tables, bar and pie graphs.

According to Table 1 above, majority of respondents is aged between 31-35 and predominantly males. The tendency slightly seems to increase with age with males. This indicates that most businesses in this region are owned or managed by men. In terms of Table 2 of ethnicity and business type it indicates that majority of respondents is black at 13 and whites who participated in the study were minority at 2. Of course, this is expected given the national and local demographics. Black people are majority in South Africa and the same at Thaba Nchu. The area of Thaba Nchu was also part of the then homeland of Bophuthatswana which was created as system of segregation of white and blacks during the Apartheid times. Thaba Nchu was a labor reserve for Bloemfontein and supplied and even continues to supply cheap labor for white elites in the city of Bloemfontein which is less than 70 km away. Furthermore, the study reveals that more respondents are mainly concentrated in the informal sector at 10. This informal sector is mainly composed of street vendors who are not registered and do not pay any tax levies. They are businesses that have a turnover of less than R 50000 per annum. The challenge with small or informal business is that they do not have insurance and expertise to protect their businesses especially during drought. They literally lack coping capacity to occurrences such as drought. It is expected for the large businesses which were only two in the study to withstand any natural event such as drought. In accordance to Figure 2, businesses which from Table 2 above are informal in nature, seem to operate well and more profitable during the season of summer. This is the time when Thaba Nchu receives a considerable amount of rainfall where many small scale farmers produce quite better compared to other seasons. However, given the current drought disaster situation in the Free State province, where temperatures are skyrocketing with almost no rains, the agri-businesses and agriculture related business are most affected. The above figure also depicts the vulnerability situation of the said businesses which trade well in summer. 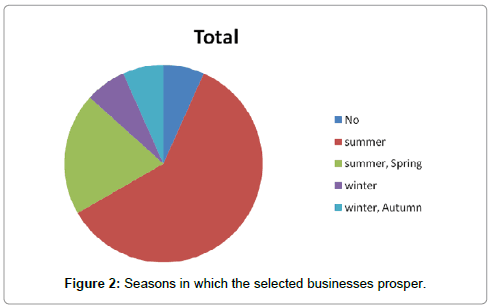 Figure 2: Seasons in which the selected businesses prosper.

The selected businesses were asked how and what they use water for, therefore butcheries use a lot of water for production purposes. These include boerwors production. Fruit and vegetables use water for keeping vegetable fresh. Respondents shoed the current drought episode has really impacted negatively on their businesses since vegetable withered due to lack of water leading to large amount revenue. However, the informal sectors seemed to have been less affected when coming to daily usage of water, they only use water for cleaning fruits when customers buy other than drinking Figure 3. Since the beginning of the current drought in the Free State province, most of the businesses were affected from where dry condition began. Many are ripped off by the very dry conditions where lead to the province being declared drought disaster. Most of the businesses indicated that the prevailing drought conditions have had a very high impact as indicated by Figure 4. 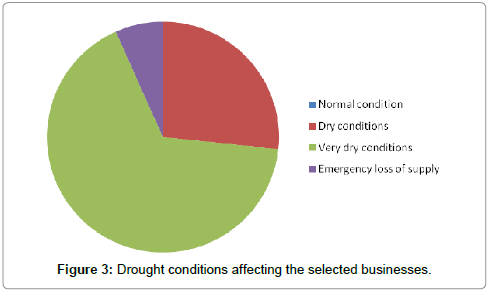 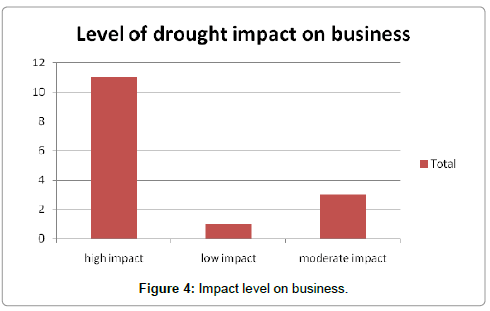 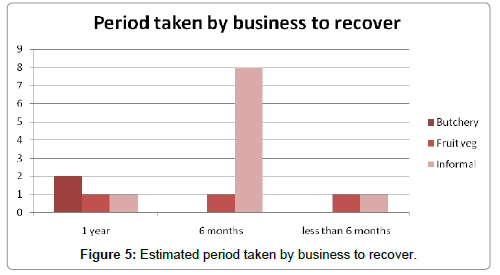 In conclusion the current drought in the Free State province which is composed of the three towns Bloemfontein, Botshabelo and Thaba Nchu, has had adverse effects on the agriculture dependent businesses. The economic damage has gone beyond 50% in terms of both employee and revenue losses. The recovery period is estimated to be anything around six months posts a considerable amount of rainfall able to crack the current drought.

Copyright: © 2016 Hlalele BM, et al. This is an open-access article distributed under the terms of the Creative Commons Attribution License, which permits unrestricted use, distribution, and reproduction in any medium, provided the original author and source are credited.