In this paper, we propose a new ultra-wideband (UWB) antenna with enhanced bandwidth for HDR-WPAN application. The proposed antenna is operating from 6.00 to 12.00 GHz which comes under upper UWB Band of 7.25-10.25 GHz range. The proposed antenna consists of a rectangular patch, which is modified by three steps, single slot on the patch and slotted ground plane. Details of the proposed antenna design and simulated results are presented and discussed.

Ultra-Wideband (UWB) was approved by the Federal Communications Commission (FCC) in Mar. 2002 for unlicensed operation in the 3.1-10.6 GHz band subject to modified Part 15 rules. The rule limits the emitted power spectral density (p.s.d) from a UWB source measured in a 1 MHz bandwidth at the output of an isotropic transmit antenna at a reference distance to that shown in Figure 1.Further, the transmitted signal must instantaneously occupy either i) a fractional bandwidth in excess of 20% of the center frequency or ii) in excess of 500 MHz of absolute bandwidth to be classified as a UWB signal. The maximum allowable p.s.d for UWB transmission of -41.3 dBm/MHz corresponds to approximately 0.5 mW of average transmit power when the entire 3.1-10.6 GHz band is used, Ultra-wideband (UWB) radio technologies draw big attentions considering the applications to the short range wireless communication, ultra-low power communication, ultra-high resolution radar etc., among them, the standardization of the UWB radio is ongoing under IEEE 802.15 WPAN High Rate Alternative PHY Task Group 3a (IEEE802.15.3a) [1,2] and wireless personal area network (WPAN) is originated by the Bluetooth (IEEE802.15.1). IEEE802.15.3a is trying to establish the new standard of WPAN to drastically increase the data rate, which is a weak point of Bluetooth. Now IEEE802.15.3a considers the use of UWB, following the tentative regulation of FCC (Federal Communications Commission, USA), to achieve the bit rate of 110 Mb/s at 10 m and 200 Mb/s at 4 m [3] Although the standardization has been at the final voting stage for more than half a year, the first candidate Multi-Band OFDM [4] has not been able to gain the required 75 % approval, and has been in competition with the second candidate DS-UWB [5]. 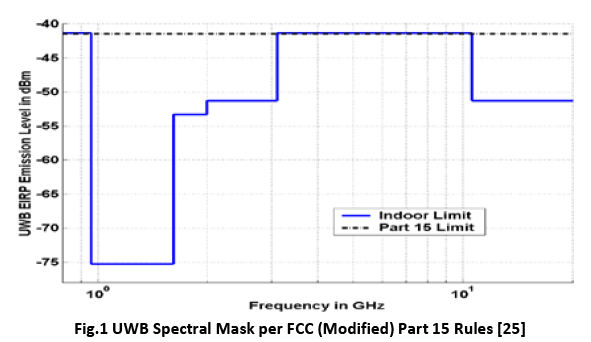 The concept of ultra wideband communication originated in the early days of radio. In the 1900s, the Marconi spark gap transmitter (the beginning of radio) communicated by spreading a signal over a very wide bandwidth. This use of spectrum did not allow for sharing, so the communications world abandoned wideband communication in favor of narrowband or tuned communication in which the FCC governed spectrum allocation. The FCC provides guidelines for radiated power in the bandwidths of these communications systems and for incidental out of band radiated power. This incidental radiated power limits were the motivation for various organizations to challenge the paradigm of narrowband communications, in an ongoing effort to squeeze capacity out of a highly regulated spectrum. The Shannon-Hartley theorem states that channel capacity grows linearly with increases in bandwidth and decreases logarithmically with decreases in the signal to noise ratio (SNR). Although this relation is only exact under a considerable caveat, it does suggest how capacity is an impetus for UWB communication. Many companies argued that they should be allowed to intentionally transmit at the incidental radiated power limits (where they could already transmit accidentally) over an ultra-wide bandwidth to take advantage of this capacity potential. This argument was the motivation for the FCC approval of UWB devices. In February of 2002, the FCC amended their Part 15 rules (concerning unlicensed radio devices) to include the operation of UWB devices without a license. The FCC defines UWB signals as having a fractional bandwidth of greater than 0.20 or a UWB bandwidth greater than 500 MHz. UWB bandwidth is defined as “the frequency band bounded by the points that are 10 dB below the highest radiated emission” [2].

The FCC ruling allows UWB communication devices to operate at low power (an EIRP of -41.3 dBm/MHz) in an unlicensed spectrum from 3.1 to 10.6 GHz (see Figure 1). The low emission limits for UWB are to ensure that UWB devices do not cause harmful interference to (i.e. coexist with) “licensed services and other important radio operations” *2+ (e.g. 802.11a devices). 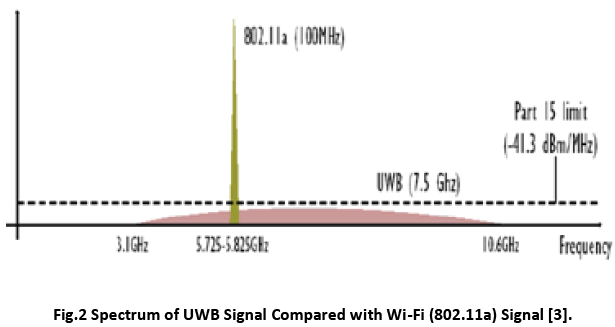 Characteristics include high bit rates over short ranges, lower bit rates at higher ranges, low power consumption, high capacity in a shared sense, and high scalability. Specific detailed requirements associated with these and other characteristics are described. Also, available set of proposals is overviewed in order to identify distinguishing trends in the IEEE 802.15.3a proposals.

(A)Important parameters in the design of UWB antennas for WPAN application: The following properties are required for the UWB antennas: Linear phase and constant group delay in directivity: If the group delay is not constant, the pulse waveform is spread out in the time domain. Low return loss over ultra wide bandwidth: If there are mismatches both at the antenna end and the circuitry end, the overall dispersion characteristic is much degraded due to the multipath within the feeding cable. Constant directivity over ultra wide bandwidth: The variation of the directivity according to the frequency results in the ripples of the frequency transfer function in some citation direction. The dispersion characteristic is then degraded. There are two fundamental principles to achieve the broadband or UWB property of the antennas [9]:

(D) Practical Antennas: For the WPAN applications, the miniaturization of the antenna is essential. It is theoretically known that the bandwidth and the efficiency are in the trade-off [10]. However, recently proposed small UWB antennas claim to achieve the high efficiency and the broad bandwidth simultaneously. Two small antenna modules are commercially available, one from Sky Cross and the other from TY. The Sky Cross antenna [11] operates at VSWR below 2.5 in the range of3.1–10 GHz. It exhibits the highest efficiency of 82 % at 5.25 GHz. The radiation pattern is horizontally Omni directional

The ground structure is modified in order to achieve high bandwidth. Steps are provided for perfect impedance matching and slot to perform the further improvement in the bandwidth. Figure 3 shows the rectangular patch antenna with steps and slot on the patch. The first step is of dimension 2.5X1 mm2 and second step is 4mm on Y-axis and 1 mm on X-axis. The dimensions of third step are kept same as second step. The ground plane is of 32 X 28.1 mm2 is used .The slot present at patch is 3X3 mm2. The ground plane is modified to enhance the bandwidth of the antenna. The Ground has the first cut of 16 x 2 mm2 and the second cut of 28.1 x 10 mm2. The antenna is designed on FR4 substrate with thickness of 1.6 mm and relative dielectric constant of 4.6. The radiator r is fed by a micro strip line of 3 mm width. The distance between the rectangular patch to ground plane printed on the back surface substrate is 1 mm, and the length of truncated ground plane of 11 mm. The excitation is a 50 microstrip line printed on the partial grounded substrate. 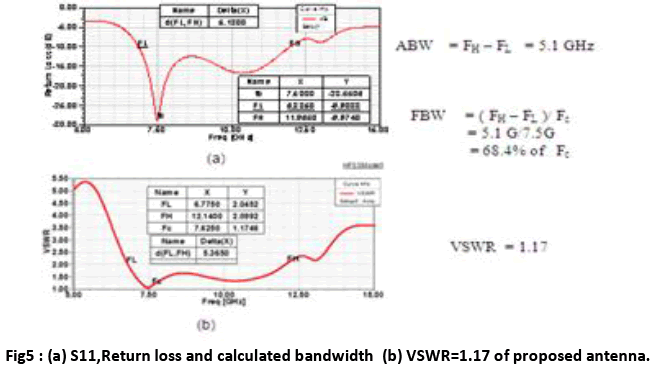 Figure 5. Shows the simulated return loss and VSWR of the proposed antenna. A new UWB antenna which consists of a square slot on the patch with three steps, a slotted ground plane is reported. However, the performance and characteristic of this antenna is not analyzed in detail. While modified patch shows the return loss improvement at the first resonant point of 7.5 GHz. By cutting the slots on the patch disturb the current distribution flow. Thus, the slot wideband behavior is due to the fact that the currents along these edges of the slot introduce the same resonance frequencies, which, in conjunction with the resonance of the main patch, produce an overall broadband frequency response characteristic. The slot also appears to introduce a capacitive reactance which counteracts with step.

A new ultra wideband antenna has been proposed for HDR-WPAN application. The simulated results of proposed antenna for return loss is less than -10 dB and VSWR is nearly 2 have shown that the antenna can be good candidate for ultra wide band application at the operating frequency of 7.5 Ghz.