The natural environment can only be maintained in a healthy state through the interest and active involvement of local people. Honeybees and their products are highly prized by many cultures around the world, and as a result, indigenous communities have come to possess rich and detailed knowledge of beekeeping [1,2]. Beekeeping is important as conservation intervention involving the development of community-based natural resource management through participation of communities [3]. Beekeepers have economic reasons to retain the natural habitat through boosting honey production [4-6]. Ethiopia has diverse ecological zones ranging from very humid to very arid zones. These zones have varying beekeeping potential most of which is unexploited [7]. The country is the largest honey producer in Africa with an estimated annual production of 45,300 tons of honey and 5000 tons of beeswax [8]. The government has identified the beekeeping sub-sector as one of the engines of economic growth with potential of poverty reduction and conservation.

Beekeeping development is possible to raise communities' awareness of the natural environment and lead them to engage in the conservation activities [9]. Loss of trees has negative implications for beekeepers which mean loss of bee forge, loss of nesting sites for bees, loss of places to keep hives and low honey production [10]. More often, climate change adaptations and integrated production options are focused on agricultural production and little efforts have been focused integrated beekeeping to climate change adaption despite its great potential for employment creating, conservation and poverty alleviation simultaneously. The objective of this study was to integrate improved beekeeping to watershed conservation as a commercial venture for income generation for the watershed community and climatic change adaption.

The study was conducted in Borodo watershed in Dendi district of West Shewa, central Ethiopia. Watershed is covering an area of 374 ha and characterized by undulating mountain and extended valley bottoms. Participatory Rural Appraisal (PRA) was conducted by a multidisciplinary team of researchers and agricultural development agents in May 2010. During PRA survey, beekeeping is identified as one of the components that ensure the long-term watershed rehabilitation, whilst generating income for local communities from production of honey and other bee products.

Thirty (30) beekeepers were purposively selected and questionnaires comprised both structured and open-ended questions including past watershed resource utilization, awareness and income based questions were asked. Key informants and focused group discussions also held to identify past and present watershed potential, conservation knowledge of beekeepers and honey production trend. Eight model beekeepers were selected and further trained was given in practical improved beekeeping to implement and demonstrate improved beekeeping through follow-up of beekeeping specialists from Holeta Bee Research Center. Determination of honeybee plant was done through direct observation along with local beekeepers in all flowering seasons. Some of the plants were photographed with a digital camera. Unfamiliar plants were identified using botanical field guides [7].

Quantitative data was analyzed through the descriptive statistics such as tables of frequencies, graphs and means comparison using Chi-square test. The statistical software SPSS Version 20 was used for this purpose. Success experiences and views of respondents were also used to explore qualitative data.

Characteristic of beekeepers in watershed

The agricultural land resource in watershed is limited and landholding is varying considerably ranging from nil to 14 hectares. Agricultural activities are mainly based on the production of Teff, Chick pea, Grass pea, Wheat and Faba bean as major crops while noug, lentil, potato, oats, and linseed are minor crops and there is also livestock rearing and beekeeping. Analysis of landholdings revealed that about 44% of households are landless (Table 1). The survey result revealed that majority (61%) of traditional beekeepers laid in the category of landless. Beekeepers that have no land choose beekeeping as their main occupation while those possess land choose beekeeping as secondary occupation. Majority (92%) of the beekeepers were males and each beekeeper with an average family size of 4. Majority of the beekeepers (79%) were in the range of 27-40 years old with mean age of 30 (Table 2).

Table 2: Socio-economic characteristics of the beekeepers

The skill development on improved beekeeping and bee flora enable beekeepers to utilize them at the maximum level, to harvest a good yield of honey [8,11-13]. The watershed has its own honey flow and floral dearth periods of short and long duration. Knowledge on bee flora helped in the effective management of bee colonies during such periods. Based on available flora, major characteristics of plant species, pollen and nectar availability and flowering duration, a bee floral calendar as per the season were developed. Beekeepers in watershed established colonies in intermediate hives and 92% of them were maintained and the beekeepers harvested honey two times a year (June and October) (Figure 1). Mean amount of honey harvested from intermediate hive was 15.5 kg per harvesting season compared to 4-5 kg of crude honey in traditional hive. This provided watershed communities with an alternative source of income compared to chopping down of trees to sell as charcoal (Figure 2).

The technical efficiency of watershed beekeepers was increased to handle colonies aligned with rehabilitation of watershed flowering resources to increase the amount of harvested honey (Table 3). The majority (73%) of beekeepers in watershed made their own intermediate hives and implemented and managed according to the seasonal variation of watershed bee forage. The majorities (92%) of established colonies were maintained and the beekeepers harvested honey two times a year (June and October). The amount of honey harvested from beekeepers group was increasing from year to year during the study (Figure 3). This provided watershed communities with an alternative source of income compared to the chopping down of trees to sell as charcoal from watershed. The watershed communities and their surrounding are increasingly more aware of the benefits of conserving their natural environment through harvesting sustainable honey and beeswax. There is a strong positive association between colonies strength and honey production (χ2=1.09 and P=0.016). The same thing is applicable in the case of number of hives as the number of hives higher, the more the quantity of honey produced. Stronger bee colonies are maintained through applying seasonal colony management including dearth period feeding, dearth period super reducing and timely super adding during flowering season [14]. This conforms that the quantity of input (seasonal colony management, good nectar and pollen producing plan and improved hives) are required to reach the surplus honey production [13]. 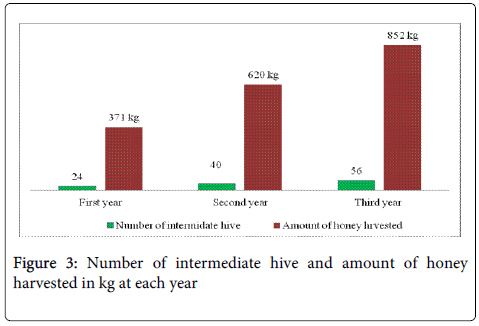 Figure 3: Number of intermediate hive and amount of honey harvested in kg at each year

Beekeeping is important as a strong incentive and the cheapest ecofriendly approaches to promote conservation of natural ecosystems as an adjunct to conventional subsistence agriculture in the face of growing human population and demand for land [1]. It was revealed that 73% of watershed beekeepers have cultural practice to plant and maintain trees, shrubs and herbs in coordinating honey production with erosion control, pasture building, cover cropping, fruit, vegetables and livestock. The awareness to maintain the existing bee flora and multiplication of plant species is important for its sustainability [15]. This increased the local control of beekeepers to conserve watershed resources. Guidelines were formulated by watershed beekeepers group to plant and maintain major bee forage trees, shrubs and herbs near homesteads, gully sides, river banks, hillsides and farm boundaries to increase honey production and important as watershed conservation. The approach is increased growing evidence for the positive link of beekeeping in conservation and there are successful experiences in integrating beekeeping in participatory forestry conservation programme [10,14,16-19].

Beekeeping as a tool to climatic change adaption

Climate change adaptations and integrated production options are focused mainly on agricultural production and little efforts have been focused adapting beekeeping to climate change despite its great potential as incentive to conservation, employment creating and poverty alleviation [21]. Honeybees enhance agricultural and agro-forestry productivity and help as motivation to maintain biodiversity [1,22]. An interaction was made with beekeepers to find the watershed awareness and honey production trends. Most (75%) of beekeepers have the ability to predict the potential of watershed depending on frequency and amount of honey harvested, 54% of beekeepers complained that colony absconding from hives were occurred because of climatic change, 43% of beekeepers criticized reduced hive occupation during swarming season, 24% of beekeepers stated that number of combs constructed in the hives was decreased and 35% stated there was increased herbicides and pesticide application which contributed to reduce honey production (Figure 4). 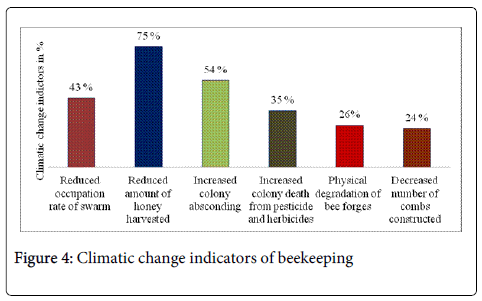 When bee forage is exhausted, honeybee colonies suspended the capacity to rear brood, often provoking rapid population decline and resulted colonies absconding. According to watershed beekeepers, for the last five years the amount of honey harvested per harvesting season (reduced from 10-8 kilograms to 5-4 kilograms) in traditional hives. This is because of the average number of combs constructed in traditional hives reduced because of climatic change occurred. Experience in beekeeping activities also the main determinants to perceive the effects of climate change on the productivity of honeybees. The older the beekeepers, the more they were able to distinguish the effects of climate change on honey production. They detected the relative abundance of plants to bloom, how long they remain in bloom, and the effect of weather conditions on availability of nectar and pollen plants.

Higher diversity of flowering plants and ground cover of wild flowers at fields' border and within permanent fallow increased honey production and effective strategy to adapt to future climatic conditions but rarely understood [12,23,24]. According to beekeepers views, crops growers in the watershed area have increased the use of broad-spectrum herbicides contributed to reduce many blooming herbs and weedy species from field borders, irrigation ditches and crop fields. This reduced flowering diversity and abundance of herbs which reduced food availability of honeybees and damage honeybee health and leads to reduced honey production. Beekeepers mentioned the example of Gizotia scabira, Bidens pachyloma and other broad leaved weedy species used as major bee forage reduced from time to time because of herbicide application which reduced the frequency and amount of honey production [25].

Beekeeping is an environmentally sound, environmentally suitable and economically feasible income generating activity for poverty alleviation and food security. It could diversify the watershed community economic base, and therefore, encourage to be allied with the current efforts in disseminating conservation-based development. Honey production from intermediate hive is a promising and watershed beekeepers have a clear financial gain from protecting the watershed habitat and always interested in bee forage plantation and conservation. The recommended watershed trees are prolific nectar/pollen producers and planting of flowering shrubs, herbs and trees should be enhanced around homesteads, gully sides, river banks, hillsides and farm boundaries which is important to the benefit of productive beekeeping. Honeybees will benefit from the nectar from these trees and honey producers realized higher honey yield. While selecting multipurpose trees for watershed, one of the factors to consider should be nectar/pollen production.

Therefore, governmental and non-governmental development agencies should provide support the promotion of the current efforts of watershed conservation through integrating improved beekeeping for surplus honey production as income generation. Active research should be initiated to provide continuous information on bee-plant interactions supplemented by seasonal colony management practices for surplus honey production as incentive to watershed conservation.

The authors are thankful to Holeta Agriculture Research Center and Holeta Bee research Center for inspirations and facilities. We express our sincere thanks to Fikadu Lema, Jessica Rothschuh and Burikiti Keflom for their inspiration and support in coordinating watershed beekeepers. This work was financed by the African Highland Initiative (AHI) project. We are thankful to all the watershed partners for their contribution towards this documentation.

Copyright: ©2014 Kumsa T et al. This is an open-access article distributed under the terms of the Creative Commons Attribution License, which permits unrestricted use, distribution, and reproduction in any medium, provided the original author and source are credited.