Copyright: © 2015 Ravi BP, et al. This is an open-access article distributed under the terms of the Creative Commons Attribution License, which permits unrestricted use, distribution, and reproduction in any medium, provided the original author and source are credited.

Deposits of quality MIO pigments in the world are limited. MIO is mined in Austria, South Africa, Spain and Morocco in small extends. Austria is the world leader in the production and export of such pigment. In India very limited deposits of micaceous hematite are found inVeldurthy, Kurnool district, Andhra Pradesh, Katni, Jabalpur District, Madhya Pradesh, and Neemkathana, Jaipur district, Rajasthan. Most of them use hand picking, pulverizing and is marketed as coating grade MIO for paint and welding electrode industries on a small scale.

The sample was collected from Krishnapuram village, Veldurthi Mandal Kurnool AP (15oN and 78oE). The ENE trending Ramalkota- Kalva-Gani, fault alignment in Kurnool basin extending into archeans genisses-Proterozoic sediments of Kadppa in the west, houses MIO associated with quartz, due to igneous intrusions near Veldurthi area. The specular hematite quartzite ore assaying 30-60% Fe, 3-18% SiO2 and traces to 0.04%P with 50% mean Fe, is estimated to have indicated reserves of 3.7 million tons in Veldurthi area.

50 kgs of as received specular hematite ore sample was mixed thoroughly, the material was crushed to -2 mm size 100% passing by roll crusher and the sample were drawn by coning and quartering. The sample was subjected to characterization studies which include particle size analysis, chemical analysis, density measurement, mineralogical studies. Rest of the sample was used for beneficiation studies for process evolution. The beneficiation studies comprise of stage rod mill grindability, effect of MOG on particle size refining, tabling and WHIMS followed by variation of WHIMS parameters like intensity, matrix type, type of operation (recovery - refining). The products were subjected to characterization tests.

The scope of work comprised of Characterization, Comminution, Amenability of sample to size, gravity and magnetic separation processes. The results are discussed below.

Characteristics of the sample

The as received sample was blackish gray lumps with considerable fine. The specific gravity, bulk density and angle of repose of as received sample were 3.3,2.3 t/m3 and 37.6o respectively. The sample analyzed 52.44% Fe (T), 0.43% FeO, 23.63% SiO2, 0.55% Al2O3, 0.08% alkaline earth salt oxides, 0.04% alkalies. 0.01% P, 0.01%S and 0.64% LOI. It contained mainly very fine grained specularite associated with subordinate amounts of fine grained quartz and minor to trace amounts of hematite, magnetite and gibbsite. The iron oxide minerals liberated fairly at size<0.1 mm. The as received sample was ground to -150 mesh size and deslimed. The deslimed product was subjected to sink and float test using Tetra Bromo Ethane [TBE] and hand magnet separation test at 10000 gauss with one re-pass for the magnetic product. The sink and magnet products thus produced met the assay specifications of metallurgical industry, though the yield was low in case of gravity method as compared to magnetic separation similar to the results obtained by Ravi et al. [1] for siliceous iron oxides. 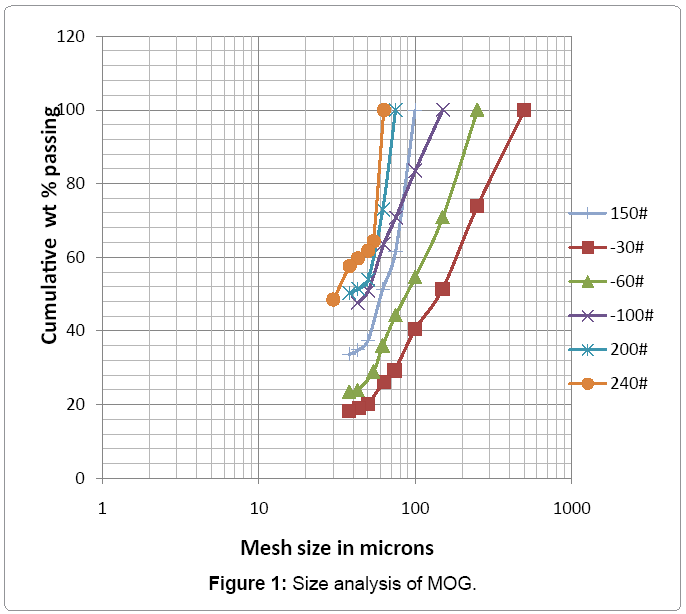 Effect of MOG on desliming

Representative samples were subjected to desliming by wet screening over 400, 500 mesh by varying the mesh of grind from.-30 to -240 mesh. The results are shown in Figure 2. The results indicate that particle size refining at fine size of -0.1 mm yielded a better grade concentrate though not meeting the specifications, probably due to liberation and siliceous non clayey nature of sample. The review of literature [2] on washabilty of sub grade iron ores indicate that scrubbing, desliming used to upgrade the feed by >2% at coarse sizes probably due to washing out the clayey impurities. IBM [2] and Ravi et al. [1] upgraded clayey iron ores by scrubbing and screening. 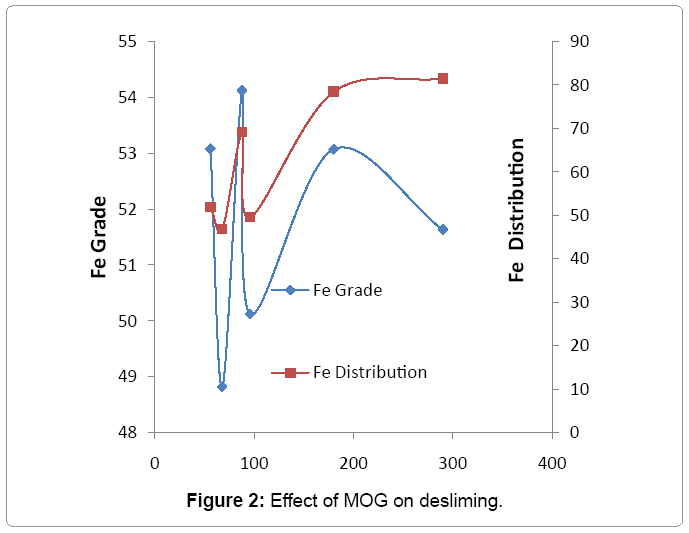 Figure 2: Effect of MOG on desliming.

Effect of MOG on tabling

Tabling tests were carried out varying the stage mesh of grind -30#, -60#, -100# and150#. The results are given in Figure 3. Optimum results just marginally failing to meet the specifications were produced at -60 # Mesh of grind, D80 180 microns. The lack of selectivity may be due to flaky nature of hematite which will report in to lighter fraction owing to very high surface area /volume, affecting its settling rate.

Figure 3: Effect of MOG on tabling.

Effect of MOG on WHIMS

Wet High IntensityMagnetic Separation (WHIMS) tests were carried out varying the stage mesh of grind -30#, -60#, -100# -150#.- 200# and -240# the test conditions and results are given (Table 1 and Figure 4). Optimum results just meeting the specifications were produced at -200 # Mesh of grind, D80 68 microns. The lack of selectivity at coarse size may be attributed to concentration of interlocked grains by WHIMS. The lack of selectivity at very fine size may be attributed due to slime coating and necessity of attrition, dispersion of slimes and high gradient. Similar results were obtained by previous workers [3-6]. 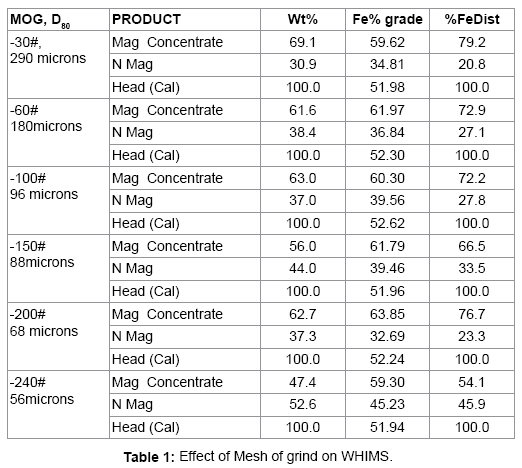 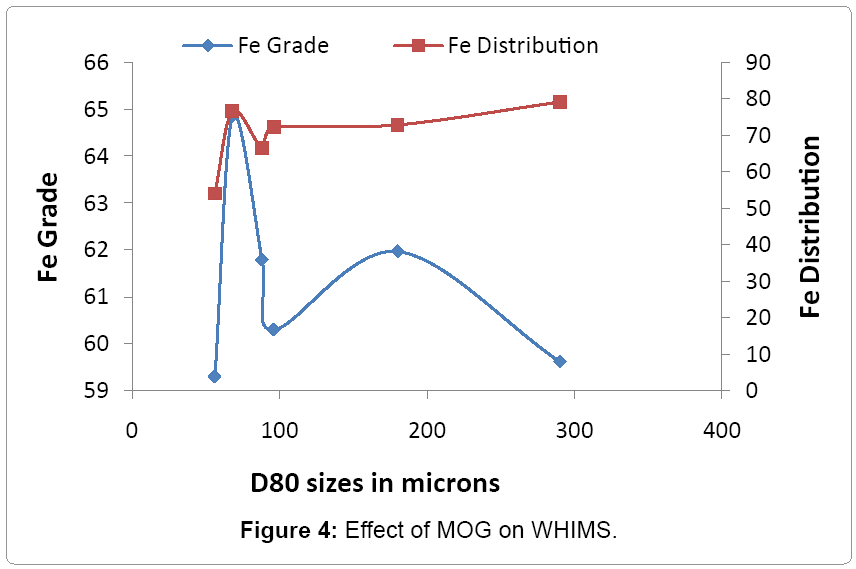 Figure 4: Effect of MOG on WHIMS.

Effect of intensity on WHIMS

WHIMS test were conducted varying the open air intensity by varying the distance between poles in the lab model ferrous wheel separator, at constant matrix, MOG. The test results are given in Table 2 and Figure 5. The results indicate that the concentrate grade increased with decrease in intensity while the % Fe distribution and wt% yield of concentrate increased with maximum intensity of 10000 gauss. Keeping the Fe recovery in view, the maximum intensity of 10000 gauss was chosen, while for attaining the grade, the cleaner intensity was reducedto 8800 gauss. 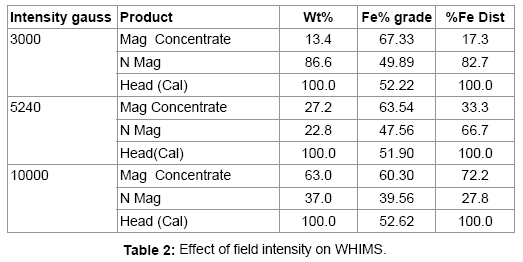 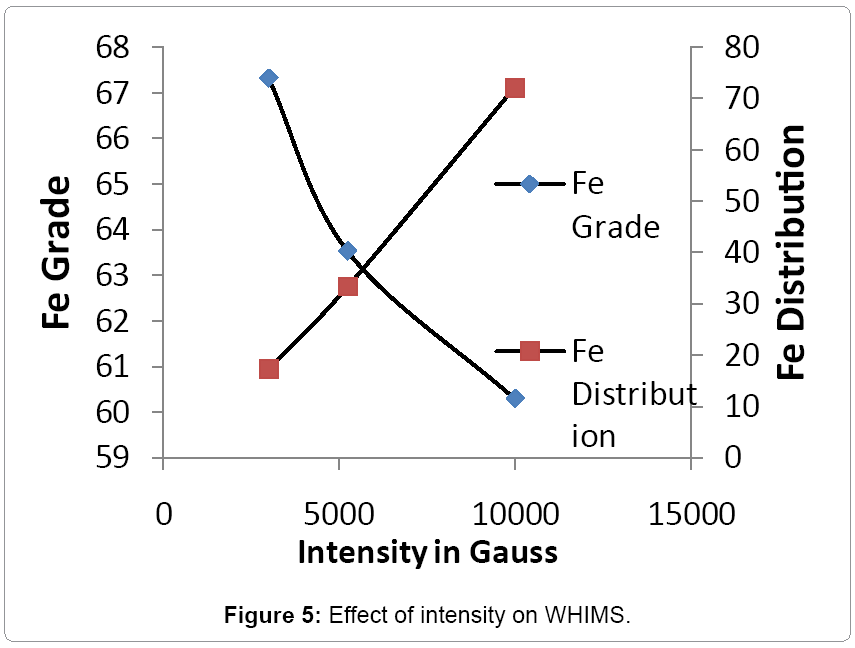 Figure 5: Effect of intensity on WHIMS. 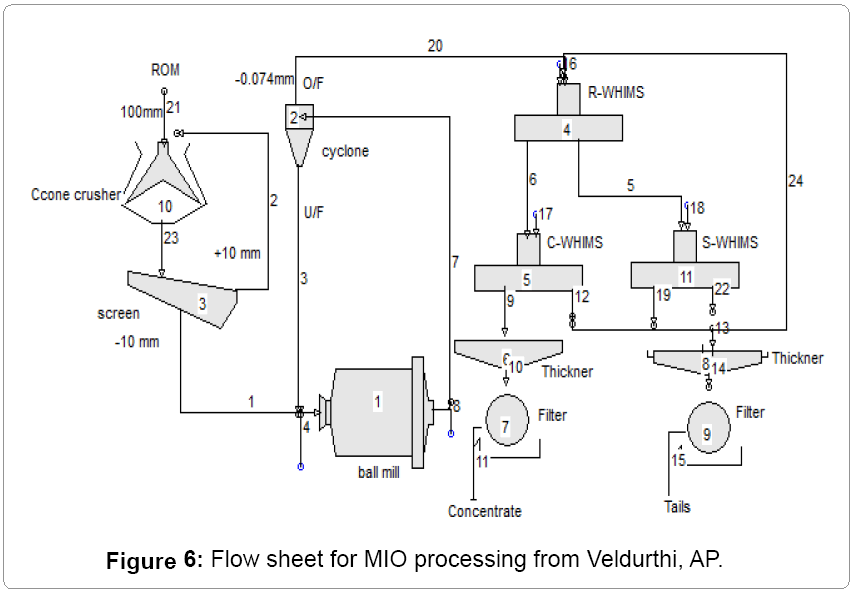 The authors wish to express their thanks to Sri AK Swamy for providing the sample. They are also grateful to S/Sri AK Swamy, MS Hiremath, GM SMIORE, and UM Reddy, GM, JCL, Bellary district for the chemical analysis.