Zahoor Ahmad Rather1* and Ruqeya Nazir2

2Center of Research for Development University of Kashmir, India

Copyright: © 2015 Rather ZA, et al. This is an open-access article distributed under the terms of the Creative Commons Attribution License, which permits unrestricted use, distribution, and reproduction in any medium, provided the original author and source are credited.

Macrophytes also known as aquatic plants grow in a continuous supply of water or are at least in soils which are covered with water during a major part of the growing season [1-3]. Aquatic macrophytes being photosynthetic organisms of freshwater habitats and form the base of aquatic ecosystems [4]. Macrophytes play fundamental roles in nutrient cycling of water bodies and provide suitable habitats for many other animals. They also determine physico-chemical properties and nutrients availabilities of water bodies [5]. For centuries, aquatic macrophytes were perceived as nuisance rather than as resource, because they block canals, hinder boat traffic and increase water borne diseases. Macrophytes are now being considered as a good source of food and fodder for humans, aquatic herbivores and farm animals and are also used as fertilizer like mulch and manure, ash, green manure, compost etc. for the production of food crops, flowering beds etc. besides serving as a base of aquatic food chain [6-10]. Recently, different researchers explored the possibilities of using them as feed source for livestock [11,12] in medicine [13]and in compounding fish feed [14]. The knowledge of chemical composition of macrophytes is of paramount importance in order to evaluate the food potential [15-17]. In view of this, the present study aims to analyze the seasonal variations in biochemical constituent’s viz. protein, carbohydrate and lipids content of aquatic macrophytes in order to evaluate their food potential.

Dal lake, an urban valley lake, is situated at an altitude of 1586 m above sea level between 34°5’– 34°9’ N latitude and 74°49’–74°52’ E longitude, in the heart of Kashmir valley. It is probably of fluvial origin having been formed from the ox-bows of the River Jhelum. The lake is multibasined with Hazratbal, Boddal, Gagribal and Nagin as its four basins.

The lake which was 7.44 km long and about 3.5 km broad and covering an area of 22 km2 at the turn of this century has shrunk to less than half of the area at present. The total surface area of the lake is at present 10.4 km2 due to the formation of floating gardens land masses and marshes and the total volume estimated to be 9.8 × 106 m2. The lake is not only shrinking in its surface area, but its water quality is also deteriorating, posing health hazards to the people living in its catchment.

In the recent years, there has been a growing concern about the Dal Lake, which is getting choked up by dense growth of macrophytes which is attributed to heavy mineral loading due to cultural eutrophication. A series of research papers studying the limnological features of the lake presented by a number of workers provides extensive data on different aspect of Dal Lake. It is established beyond any doubt that the urban lake is undergoing far reaching changes in the environment due to discharge of large quantities of waste from human settlement, agricultural land and house boats and the ecological stress is reflected by excessive growth of water weeds, deterioration of water quality, and high productivity.

The present study was carried out in the 3 basins (I Hazratbal basin, II Nishat basin, III Gagribal basin) of Dal Lake for a period of four months during June to October 2013 (Figure 1). Six species of macrophytes belonging to three different systematic forms emergents, rooted with floating leaves and submerged (two each) were chosen for the present study (Table 1). The selection was made considering the abundance of macrophytes at the sampling sites and the easiness for recognition and collection. Table 1:Aquatic plants with scientific, common names and flowering seasons, that were collected from the Dal Lake for the evaluation of total Proteins, total carbohydrate and total lipids.

The quantitative estimations of various biochemical constituents viz. total carbohydrates, total lipids and total proteins for macrophytes were worked out on monthly basis for a period of four months. The Macrophytes were handpicked from their natural habitats, sorted out and washed thoroughly with water at the time of collection then they were placed in polybags and transported to the laboratory where they were incised to include only leaves and shoots. The plant material was then washed thoroughly to render free of mud, periphytic growth, encrustaceans, etc. and moisture was drained before being analysed for various biochemical parameters. The analysis was done as per standard methods given by [10,18,19].

Total protein content of macrophytes was determined colourimetrically by the method of [18].

Total carbohydrate content of macrophytes was determined colourimetrically by phenol-H2SO4 method after extraction into buffer solution of pH 7 [10].

Total lipid content of macrophytes was determined colourimetrically by Sulphophosphovanillin method after extraction in buffer solution of pH 7 [19].

In general the concentration of total carbohydrates was found to be higher during the peak growth season of macrophytes. The total carbohydrate concentration accumulated in the studied macrophytes at the three basins of the Dal lake on the mean value basis were observed to be highest in case of rooted –floating like Potamogeton natans (17.4 ± 1.33% of fresh weight) at the site III (Gagribal basin) and Nelumbo nucifera (19.13 ± 0.69% of fresh weight) at the site II (Nishat basin) followed by emergents such as Typha angustata and Phragmites austral as shown in Figure 2. However, the lowest values were observed in submerged viz. Potamogeton lucens (12.71 ± 0.54% of fresh weight) at sight II (Nishat basin) and Ceratophyllum demersum (10.24 ± 1.40% of fresh weight) at the site I (Hazratbal basin) as shown in Figure 2. The results of the present study corroborate with that of [4,20]. The variations in carbohydrate content among different aquatic plants may be attributed to the differences in the growth medium, nutrient levels, the climatic factors, hydrological conditions and sediment characteristics, which may have influenced the vegetative growth and metabolism altering the concentration of soluble carbohydrates in the plant tissue [21]. Figure 2: Spatial variations in the carbohydrate content of macrophytes in Dal Lake.

In the present study the concentration of total proteins depicted slight variations during the growth period of fresh water macrophytes. In general the protein content of macrophytes depicted higher values during their peak growth season on the mean value basis, the concentration of total proteins in the studied macrophytes at the three basins of the Dal lake was observed to be highest among rooted floatingleaf type macrophytes such as Nelumbo nucifera and Potamogeton natans (2.41 ± 0.17% of fresh weight and 1.44 ± 0.15% of fresh weight ) respectively at the site III (Gagribal basin) followed by emergents (Typha angustata and Phragmites australis) as shown in (Figure 3). On the other hand, the lowest concentration was recorded in submerged such as Ceratophyllum demersum (0.94 ± 0.10% of fresh weight) and Potamogeton lucens (1.08 ± 0.08% of fresh weight) at the site I (Hazratbal basin) as shown in (Figure 3). Similar results has also been reported by [4,22,23]. The spatio temporal variation in protein content of macrophytes may be attributed to the fact that the protein content of macrophytes varies with respect to species, season of the year, locality and water distribution [12,21],. In general, the fluctuations of protein content in the same plant at different stations recorded herein may be due to the influence of physicochemical factors along with the variations in vegetative growth, metabolism and development of the plant. At the same station different plant species recorded different accumulation patterns which may be due to variation in the accumulation efficiency in terms of their phenology, the environmental parameters such as pH and high amount of nutrients created a congenial atmosphere for the luxuriant and healthy growth of the plant. The rapid growth of plant took place accompanied by the formation of new tissues and the protein content also increased to the maximum and it is in agreement with the findings of [21,24]. 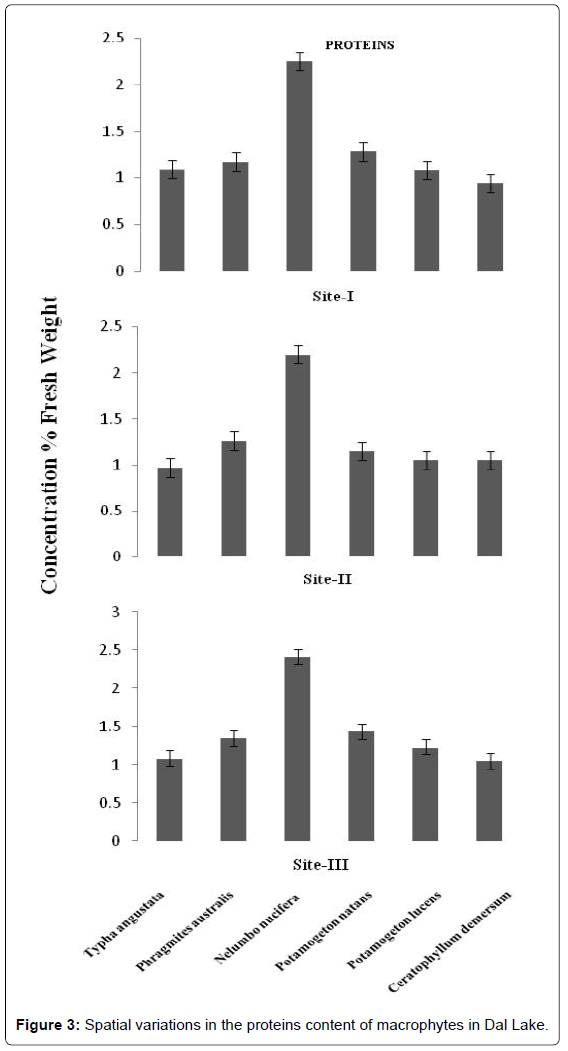 Figure 3: Spatial variations in the proteins content of macrophytes in Dal Lake.

The total lipid content revealed certain similarities as well differences among different classes of macrophytes. In general the concentration of total lipids showed increasing trend from the month of June to September and higher levels were recorded in the month of September. Maximum concentration of total lipids at all the three sites was registered for Typha angustata (5.87 ± 1.94% of fresh weight) at site III (Gagribal basin) and (5.47 ± 1.90% fresh weight) in case of Phragmites australisa at sight II (Nishat basin (Emergents) as shown in (Figure 4). which can be attributed to their efficiency in up taking many plant nutrients from the sediments and thus helping in pollution abatement [25] closer to that of submerged ones. while as the lowest concentration was observed in rooted floating macrophytes like Nelumbo nucifera (1.30 ± 0.71% fresh weight) at site III (Gagribal basin) and Potamogeton natans (1.40 ± 1.23)% of fresh weight) at site II (Nishat basin) as shown in (Figure 4). Our results are in consonance with the findings of [4,23,25-27]. Aquatic plants have been reported to contain 1.18 to 5.42% total lipid content [27]. Since aquatic macrophytes are known to differ widely in their chemical composition depending upon species, season and location [28]. Fluctuations noticed in the concentration of lipid in the different genera may be due to the changes in the environmental factors that might have influenced the vegetative growth and development including availability of nutrients, allochthonous materials as well as variation in the efficiency of lipid accumulation among the plants [29]. 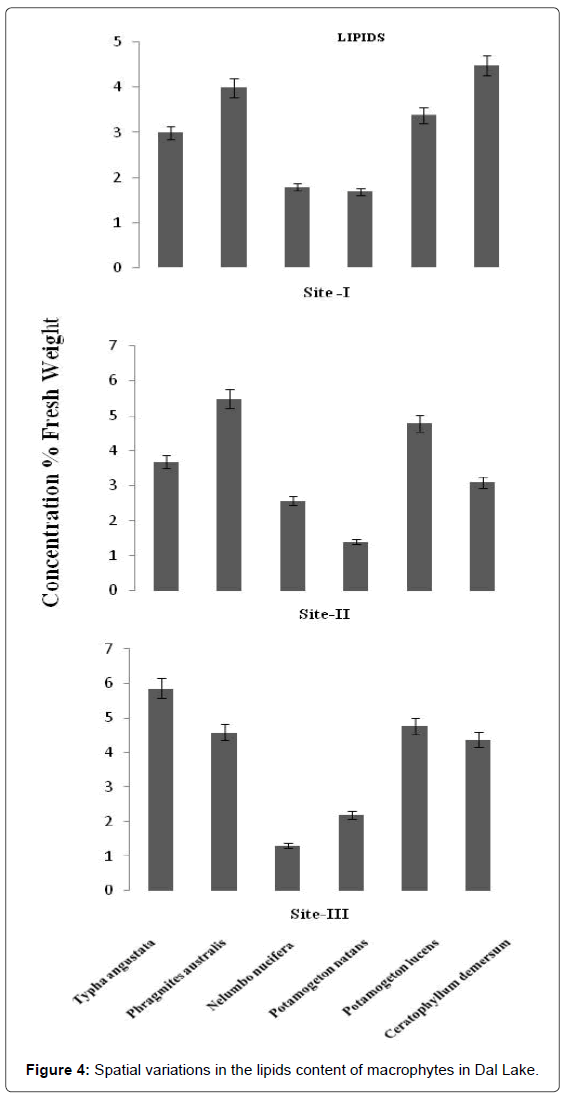 Figure 4: Spatial variations in the lipids content of macrophytes in Dal Lake.

The total lipids presented the highest variations among the studied periods with the significant increases for Ceratophyllum demersum in the early autumn season experiencing frequent rains. These differences indicate an acceleration of productive metabolic activity during this period and/or higher consumption of this organic compound during the dry period [30-32]. Mentioned that this may be because of the reduction in the levels of proteins and carbohydrates. Under this condition, more photosynthetic intermediates can be utilized in the synthesis of lipid molecule. The tendency to accumulate higher concentration of total lipids in the tissues of submerged macrophytes in this period, suggests that this period presents better conditions to the development of these macrophytes [21,29,33].

Aquatic macrophytes are known as photosynthetic organisms of freshwater habitats and are basic part of fresh water ecosystem. As a result of the higher accumulation of lipids, protein and carbohydrates in fresh water macrophytes (Typha angustata, Phragmites australis, Nelumbo nucifera, Potamogeton natans, Potamogeton lucens, Ceratophyllum demersum), these could be involved in the food production process, directly as human food, livestock fodder, fertilizer (mulch and manure, ash, green manure, compost, biogas slurry) and as food for aquatic herbivores, such as fish, turtles, rodents and manatees. The present study of biochemical analysis of fresh water macrophytes has showed the ability of aquatic macrophytes to be used as a supplementary source of food, fodder. As with every increasing day there is increase in human population, pollution of water bodies, which results in decreasing output of food resources from land due to urbanization and soil pollution so these macrophytes can serve as an alternate source of food. The use of macrophytes as food for humans, animals and aquaculture purposes is based on their high nutritive value arising from the richness of biochemical constituents such as proteins, carbohydrates and lipids.

This work is based on the first author’s (Zahoor Ahmad Rather) project work and second author has helped in laboratory work and manuscript preparation. Authors are highly thankful to Head, Department of Environmental Science, University of Kashmir for providing monetary help and also for providing laboratory facility to carry out the work.