Copyright: © 2017 Mohamed NH, et al. This is an open-a ccess article distributed under the terms of the Creative Commons Attribution License, which permits unrestricted use, distribution, and reproduction in any medium, provided the original author and source are credited.

In this study eight species related to Aspergillus (3 species), Fusarium (1), Penicillium (1), Emericella (1), Nigrospora (1) and Trichoderma (1) were isolated from leaves and latex of Calotropis procera. Only P. chrysogenium and A. niger were able to grow on natural rubber but other species were not. The degrading ability of (Penicillium chrysogenum and Aspergillus niger), isolated from latex of Calotropis procera was assessed. The degradation of rubber latex was determined by measuring the increase in protein content of the fungus (mg/g dry wt), reduction in molecular weight (g/mol) and inherent viscosity (dl/g) of the latex. Moreover, the degradation was also confirmed by observing the growth of these species strain using scanning electron microscopy.

Calotropis is a small genus belonging to family Asclepiadaceae, Calotropis gigantea and C. procera are the two most common species in this genus used in traditional medicine, and only these two species are usually reported in literature [1], and are distributed in tropical and subtropical Africa, Asia, and America [2-5].

Calotropis procera (Ait) WT Aiton is a small wild-growing tropical plant, known by different names like sodom apple, usher, dead sea apple, swallow wort, and milk weed [6,7]. All parts of this plant have the ability to produce large quantities of latex when cut or broken [7-9].

The plant latex could be separated after centrifugation into three layers: top layer containing Natural Rubber; middle layer of serum, and the bottom layer of lipids [9,10]. The chemical composition of latex is very complex, it contains (wt/wt) natural rubber poly (cis-1, 4-isoprene) 25 to 35%, which consider the main constituent of Natural rubber latex, and it is consisting of isoprene units C5H8 in the cisconfiguration, a highly unsaturated hydrocarbon, with an average molecular weight about 106 Da [11-13].

Natural Rubber is a basic material for manufacturing tires, latex gloves, condoms, seals, balloons, balls for sports and many other things [14]. Degradation potential of the microorganism is dependent upon colonization on natural rubber and accompanied by a loss in the weight of the rubber hydrocarbon and a decline in the relative viscosity of the polymer solution [13].

Many other reports have been published on the biodegradation of natural rubber hydrocarbon as a sole carbon source by bacteria [15-22], fungi [13,23,24]. Several microbes were used to biodegrade Calotropis procera latex [25,26].

The aim of this work is to assess the ability of mesophilic endophytic fungi isolated from Calotropis procera leaves and latex on sugar-free Czapek agar and to test their ability to metabolize and degrade rubber latex of C. procera as a sole carbon source.

The latex of Calotropis procera plant was obtained by taping method. Fresh latex was centrifuged at 17,000 rpm for 20 min at 4°C in SR4000 Prolabo centrifuge (France). latex was separated into three layers: a sticky top layer containing Natural Rubber; clear middle fraction of serum, and a small quantity of lipids at the bottom of the tube (Figure 1). 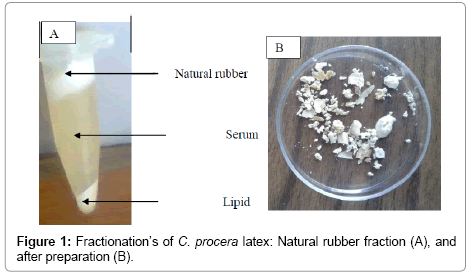 Figure 1: Fractionation’s of C. procera latex: Natural rubber fraction (A), and after preparation (B).

The natural rubber fraction was separated and washed three times by deionized water to remove impurities and dried at 30°C for 24 h, A known weight (20 mg) of the prepared natural rubber was dissolved in 2 ml of tetrahydrofuran (THF), then its molecular weight was determined by gel permeation chromatography (GPC) [9,13].

After preparation of pure natural rubber (NR), It was dissolved in tetrahydrofuran (THF) (20 mg/2 ml THF), and spotted on to agar media (each 50 μl/colony), then left in an oven at 30°C until THF is evaporated and the NR became white in appearance. Fungi were inoculated with tooth pick on the top of pure natural rubber (NR) spot, incubated for 15 days at 28°C. The diameters of colonies were measured, then fungi which grow well in solid media Growing of in liquid media for measuring biodegradation ability after 30 days. At the end of incubation period the rubber pieces and microorganisms were separated by centrifuging at 10000 rpm for 15 min, microorganisms (bottom layer) were subjected for protein determination while natural rubber pieces (top layer) were collected, washed with deionized water, and dried at 30°C and then subjected for analytical methods (molecular weight and viscosity) as well as SEM photography has been described before [13,22].

The total protein pellet was determined according to the method adopted by Lowry et al. [27].

A known weight of natural rubber was dissolved in 2 ml THF and passed through a 0.45 μm-pore size filter. Gel permeation chromatogram of the the model Agilent technologies 1100, Germany (present in National Research Center, Doki, Cairo) was used. THF was used as the eluent with a flow rate 1 mL / min. Polymethylmethacrylate and polystyrene standards were used to calibrate the columns. The refractive index detector 104 A°, Colum PL gel Micrometer 100; 10000; 100000. The GPC apparatus was run under the following conditions: flow rate=2.000 ml/min., injection volume=100.000 μl, sample concentration=1.000 g/l. The values of molecular weight were calculated by means of a computer program [13,22].

The morphological changes during growth of the organism on natural rubber was also studied by scanning electron microscopy. The inoculated samples as well as the control were fixed overnight in glutaraldehyde 5%, then dried at 50°C. The samples were mounted on metal stubs and coated with gold and palladium (Jeol JFC1100E Iosputtering Device). Micrographs were taken with a Joel JSM- 4500 LV electron microscope operating at 15 KV in Assiut University, electron Microscopy unit [13,22].

Isolation and identification of fungi

Eight isolates (representative for the species isolated) were tested for their ability of growing on sugar-free Czapek agar coated with thin film of pure natural rubber (3 replicate agar plates for each isolate). Only 2 isolates related to Penicillium chrysogenum and Aspergillus niger could grow on pure natural rubber film (Table 1 and Figure 2), while Emericella nidulans, A. fumigatus, A. flavus, Nigrospora oryzae, Fusarium oxysporum and Trichoderma harzianum showed only growth on sugar-free Czapek agar supplemented with crude latex [28-32].

Figure 2: Film of pure natural rubber (A), P. chrysogenum and A. niger on NR (B, C), respectively.

Fungal protein, viscosity and molecular weight of P. chrysogenum: Protein content of P. chrysogenum grown on natural rubber increased significantly from 2.71 mg/g mycelial dry weight after 15 days to 5.23 mg/g after 30 days of incubation in liquid Cz medium. On the other hand rubber viscosity decreased significantly from 6.0 dl/g after 15 days to 5.5 dl/g after 30 days of incubation. Figure 3: Degradation of Calotropis latex rubber (20 mg/25 ml Cz small medium under shaking 150 rpm at 25°C for the endophytic fungi, A. niger and P. chrysogenum as determined by Scanning Electron Microscope (SEM): uninoculated rubber (A), inoculated rubber latex after 15 days (B) and 30 days (C) with A. niger or P. chrysogenum.

1. Values in brackets represent percentage of degradation rate of natural rubber by the endophytic fungus in case of viscosity and molecular weight after 30 days.

2. Figures in the table are means of three replicates ± standard deviation.

In this respect, Ismail et al. [13], showed high degradation rate of poly (cis-1, 4-isoprene) rubber (Figure 4) by Aspergillus terreus 31.04% and A. flavus 28.73% after 30 days and comparable with the control. The ability was also determined by measuring the increase in protein content of each fungus, reduction in molecular weight and inherent viscosity and observing the growth using scanning electron microscopy (SEM). 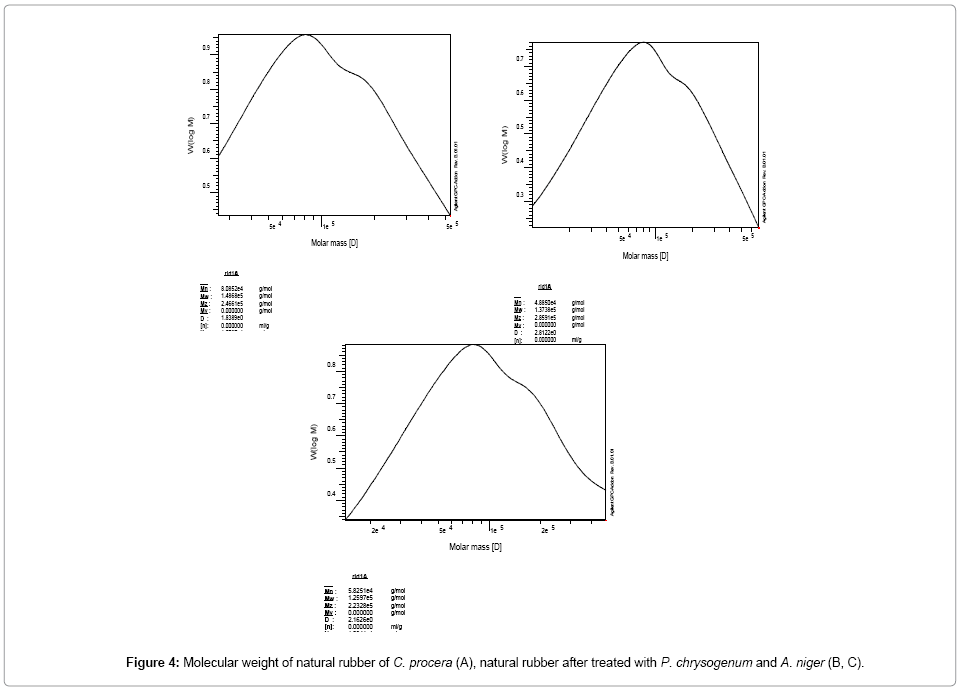 The 15 and 30 days old inoculated natural rubber samples with P. chrysogenum and A. niger were photographed using scanning electron microscopy (SEM). These SEM microphotographs clearly indicate the colonization of the fungus on the natural rubber surface (Figure 3). In this respect, the colonization and/or growth on the rubber surface using by SEM micrographs have been observed for Aspergillus terreus, Aspergillus flavus and Myceliophthora thermophila [13], Aspergillus sp. and Pseudomonas sp. [17].

The degradation process of natural rubber of C. procera by P. chrysogenum and A. niger were proven by the increase in protein content, decrease in both molecular weight and inherent viscosity, and by observing the fungal growth on the surface of natural rubber using scanning electron microscopy (SEM). The current results demonstrate that the degrading fungal isolates could be used as promising tools for the removal of disposal of rubber products.

Authors thanks Assiut University for funding and technical support.