Copyright: © 2015 Kaur H, et al. This is an open-access article distributed under the terms of the Creative Commons Attribution License, which permits unrestricted use, distribution, and reproduction in any medium, provided the original author and source are credited.

Biosensors are the devices, which integrate the biological recognition element and a small transduction unit for the purpose of detecting various analytes. Biosensors are being developed for various applications such as quality control of food, agriculture, medical and pharmaceutical field, clinical assay and disease diagnostics. Recently, field of tissue engineering and cancer diagnostic provide the new scope in biosensor development. Specially, Cancer diagnostics can provide the broad market for new biosensors. This review focuses on the general description of biosensors and their applications in the field of tissue engineering and cancer diagnostics.

1962, Assembly of world’s first biosensor by Clark and Lyons begins a new era in the field of detection of various compounds with more specificity and sensitivity [1]. Biosensor developed by Clark and Lyon was actually a glucose sensor which measures the glucose level via utilizing glucose oxidase enzyme as recognition element and detect the oxygen reduction levels which further correlated with the glucose level in the body. The International Union of Pure and Applied Chemistry (IUPAC) defines a biosensor as “a device that uses biochemical reactions mediated by isolated enzymes, organelles or whole cells to detect the effects of chemical compounds by electrical, thermal or optical signals” [2]. Biosensors consist of three basic elements, biological recognition element, signal transduction unit and signal processing unit (Figure 1). Antibodies, receptor proteins, nucleic acids, enzymes, cells and organelles can act as biological recognition element of the biosensor whose function is to detect the signal from environment through some biochemical reactions. Transducer converts the particular biochemical reaction into electric signal which further processed by the signal processing unit. Traditional analysis methods often include pH and conductivity analysis but their applicability is limited because of low specificity and sensitivity. Accurate analysis in these methods is expensive which usually necessitate the use of sophisticated instrumentation [3]. Biosensors have the ability to overcome such limitations because of their simple design, sensitivity and ability to provide the data in real time. Biosensors are being developed for various applications such as quality control of food, environmental and bioprocess control, agriculture, medical and pharmaceutical field, clinical assay and disease diagnostics [4]. The areas where biosensors have shown a particular importance are cancer diagnosis and tissue engineering. The objective of this article is to review the potential applications of biosensors in the field of oncology and tissue engineering. 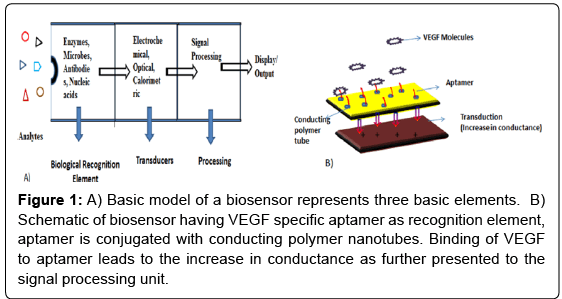 Figure 1: A) Basic model of a biosensor represents three basic elements. B) Schematic of biosensor having VEGF specific aptamer as recognition element, aptamer is conjugated with conducting polymer nanotubes. Binding of VEGF to aptamer leads to the increase in conductance as further presented to the signal processing unit.

Tissue engineering involves the study of growth and development of cells, organs and engineered tissues for restoring the damaged or diseased tissues and organs. Biosensors have shown the tremendous potential in the field of tissue engineering. Concentrations of biomolecules such as glucose, adenosines, and hydrogen peroxide levels play major roles in the maintenance and development of three dimensional cell cultures and organs. Here, biosensors can apply their potential to detect such biological analytes in real time which further provide the insight into cellular activities [5].

Adenosine diphosphate (ADP) and adenosine triphosphate (ATP) plays important role in cellular metabolism and also has a role in the extracellular signalling. It is an important factor required for the tissue engineering experiments. Traditionally, luciferase based methods have applied for the adenosine detection but its use is restricted by the low sensitivity and resolution. Biosensors can be used for the specific and sensitive detection of the adenosines. Schneider et al. fix up a scanning tip, with the ATPase-containing S1 myosin fragment, to detect the sources of ATP release and its concentration as well [6]. Kirana Aran et al (2014) fabricates the biosensor system which poised of interdigitated microelectrodes (IDME) coated with a thin film of a stimuli responsive polymer which is sensitive to reactive oxygen species (ROS). The morphology of polymer changes as a result of ROS generated from the decomposition of hydrogen peroxides and it further generates a measurable electric signal which reveals the hydrogen peroxide concentration. This sensor can be further used to detect oxidative stress in cells [7]. Microfabrication technology leads to the development of new types of miniaturized electrochemical biosensors. Micro electrode arrays based biosensors can help to learnt the physiology of cardiomyocytes such as propagation and conduction properties [8]. Natarajan et al. developed a modified Micro Electrode array to study the cardiac physiology formed from self-assembled monolayers (SAMs) with a photolithography method [9].

Role of biosensors in cancer diagnosis

Cancer is the major cause of deaths in the both developing and developed countries. Early diagnosis is crucial for the further successful treatment of the cancer and there is a better chance of cure. Tumor growth is accompanied by gene and protein changes mostly results from the mutations and these changes can act as the specific biomarkers for the cancer diagnosis (Table 1). Cancer biomarkers are potentially one of the most valuable tools for early cancer detection [10]. Traditionally, cancer is diagnosed by the techniques like solution hybridization, ELISA and PCR which are usually time consuming and sophisticated [11]. Biosensors have been developed in order to improve the diagnosis and treatment of various cancers. Aptamers, ssDNA, dsDNA, antibodies and specific antigens (p53 antigen) can be used as the biological recognition element in the biosensors. Medley et al. developed aptamer based biosensors conjugated to gold nanoparticles (Aptamer Conjugated Gold Nanoparticles) which uses the optical and resonance properties of gold nanoparticles which measure the variation in absorption spectra and scattering profiles when nanoparticles are near to each other [12]. Nanoparticles are come together on the cancer cell when specific aptamer is bounds to its target cell; it leads to the colour and absorption change of the sample. This technique can be used for the diagnosis of non-small cell lung cancer (NSCLC). In another study, Kwon et al combined the aptamers with conducting polymer tubes in a biosensor for the detection of an agent responsible for angiogenesis during cancer named as Vascular Epidermal Growth Factor (VEGF) and also revealed that tubes with smaller size shows the high degree of sensitivity during detection [13].

Table 1: List of biomarkers for cancer can be used as a target for diagnostic purpose [19-21].

Leukaemia is one of the several cancers whose diagnosis is really difficult. Mostly, a more sophisticated real time PCR is used for the diagnosis purposes. Gorodkiewicz et al. developed a method of determining 20S proteasome levels using a surface plasmon resonance imaging (SPRI) biosensor which uses the highly selective interaction between the proteasome’s catalytic subunit and immobilised inhibitors which acts as recognition element [14]. Here, gold chips have been utilized for the recognition of element. It can further be used for the quantitative data determination and helps to improve the early diagnosis of leukaemia.

Nanofibrous material based biosensors provide application for the detection of important cancer biomarker telomerase whose detection with conventional techniques is difficult due to its minute quantity present in the cell nuclei. Nanoscale biosensors with antitelomerase antibodies can detect the intracellular amount of telomerase [15].

The use of biosensors in aid to cancer diagnosis and tissue engineering experiments would help clinical to make early therapeutic decisions and helps in real time monitoring of bioanalytes. Early and steak detection of molecules and portable use of biosensors makes an important step towards the personalized medicine and “in field detection of diseases”.