Copyright: © 2015 Hu JJ, et al. This is an open-access article distributed under the terms of the Creative Commons Attribution License, which permits unrestricted use, distribution, and reproduction in any medium, provided the original author and source are credited.

A biosensor essentially consists of two main components, a physical transducer and a biorecognition element. In this study, a magnetostrictive platform was served as the transducer, since it offers wireless or remote detecting, which is a unique advantage over conventional sensor platforms. E2 phage specific to Salmonella typhimurium (5 × 108 CFU/mL) was selected as the biorecognition element, and the sensors were immersed in the phage suspension for 1 hour to achieve uniform physical immobilization on the surfaces. The detecting principle is illustrated in Figure 1. Figure 1: Detection principle of the ME biosensor.

As shown in Figure 1, the sensor exhibits a physical resonance with specific frequency when it undergoes a time-varying magnetic field due to its magnetoelastic nature of the amorphous magnetostrictive alloy. Upon the attachment of the target pathogen, the mass of the biosensor increases, thereby its resonant frequency decreases. In other words, a shift in resonance frequency of the magnetostrictive sensor occurs when its mass changes, and the frequency shift depends only on the mass change when testing environmental parameters are invariable [1-3].

If the mass increase is small compared to the initial mass of the biosensor, the shift in the resonant frequency is given by Liang et al., and Guntupalli et al., [4,5]:

Where M is the initial mass, Δm is the mass change, and Δf is the shift in the resonant frequency of the sensor.

According to the shift in the resonance frequency due to the specific binding of Salmonella typhimurium, the concentration of the target bacteria in the detected environment can be evaluated.

However, it was found that it is impossible for E2 phage to cover 100% of the ME biosensor surface in real application [6,7]. The blank area of the biosensor surface, where no E2 phage is covered, has a tendency to bind other food components, such as proteins, salts or fat in the media. These non-specific bindings will also cause mass increase of the sensors, thus also result in a decrease in resonant frequency, which will bring out the measurement error and adversely affect the detection sensitivity. Therefore, in order to minimize or avoid the non-specific binding, it is necessary to block the blank area of the biosensor surface. The goal of this research is to evaluate the blocking effect of different kinds of reagents, thus, control sensors without phage immobilization were prepared and adopted, which means there is no specific binding of Salmonella typhimurium on the control sensors’ surfaces.

Three kinds of blocking reagents (Bovine serum albumin, Superblock blocking buffer, and blocker BLOTTO) were used and evaluated. The gold-coated sensors were immersed in different blocking reagents (about 330 μL in each tube) for 2 hours for uniform immobilization. 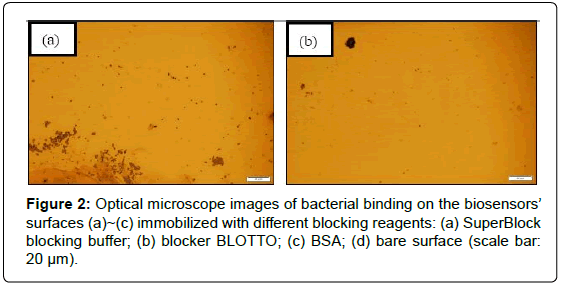