Copyright: © 2017 Marvulli R, et al. This is an open-access article distributed under the terms of the Creative Commons Attribution License, which permits unrestricted use, distribution, and reproduction in any medium, provided the original author and source are credited.

Introduction: Pisa syndrome (PS) is a lateral axial dystonia (LAD) characterized by contraction of the trunk muscles that results in a marked tonic lateral flexion of the thoraco-lumbar. PS has been described among symptoms of tardive neuroleptic dystonia, in patients with dementia treated with cholinesterase inhibitors, in patients with idiopathic primary dystonia, in patients with Parkinson’s disease (PD), Alzheimer’s disease and multiple system atrophy. Unlike most of motor PD symptoms, PS is not significantly improved by dopaminergic medications or surgery. In this study we demonstrated efficacy of botulinumtoxinA and physiotherapy in patients with PS post PD due to paraspinal muscles overactivity. Material and methods: ten patients evaluated until 6 months after treatment with 100U of IncobotulinumtoxinA (Xeomin®, Merz Pharma) in the paraspinal muscles and physiotherapy. We assessed baropodometric exam, goniometric measurement and VAS scale. Results: Data demonstrated statistical improvement (p<0,05) until 6 months after treatment in all evaluation examined. Conclusion: BotulinumtoxinA and physiotherapy treatments were well-tolerated and effective and could be considered a possible treatment in parkinsonian patients with LAD.

Pisa syndrome (PS) is a lateral axial dystonia (LAD) characterized by contraction of the trunk musculature that result in a marked tonic lateral flexion of the thoraco-lumbar spine and backward axial rotation. It may cause painful, impair function and postural instability. PS has been described among symptoms of tardive neuroleptic dystonia, in patients with dementia treated with cholinesterase inhibitors, in patients with idiopathic primary dystonia, in patients with Parkinson’s disease (PD), Alzheimer’s disease, and multiple system atrophy [1-7].

The initial development of lateral flexion in PD is subclinical but its progression is rapid and it is caused by a component of dystonia added to rigidity [8-10]. The pathophysiology is not fully understood.

A recent study demonstrated that PS might be due to a central dysfunction (decreased muscle activation-weakness) which causes dissynchronisation of axial muscles activity of external oblique muscle (67%) or rectus abdominis muscle (27%) or quadratus lumborum muscle (32%) or paraspinal muscles (23%) [11].

To diagnose lateral deviation can be used clinical criteria. Lateral trunk bending should be exceeding 10°C toward one side as measured on a wall goniometer, which increased during walking and reduced in lying position in the absence of mechanical restriction to trunk movement, such as ankylosis or clinical or radiological signs of degenerative vertebral, vertebra rotation or skeletal disease developed before the appearance of the lateral flexion. Unlike most of motor PD symptoms, PS is not significantly improved by dopaminergic medications or surgery.

There is no effective pharmacological therapy and deep brain stimulation of the subthalamic or the pedunculopontine nucleus, reported to have some benefit, is used as last resource [12-14]. Recently, botulinum toxin injection (BTX) of axial muscles has shown some promising results, especially when accompanied by physiotherapy [15,16]. However, its important clarified which muscles are overactive and hypoactive.

In the assumption that trunk deviation in PS is due to paraspinal muscles dystonia (lateral axial dystonia), the treatment with BTX should be able to control the distonic symptomatology and simultaneously improve muscle tone-trophism with visible results on the postural plane.

Aim of this study is to demonstrate efficacy of IncobotulinumtoxinA (Xeomin®, Merz Pharma) in patients with PS due to overactive of paraspinal muscles.

Ten patients (middle age 75 ± 3,2) are recruited affected by LAD in Parkinson's Disease due to overactive of paraspinal muscles demonstrated with electromyographic, in pharmacological treatment with levodopa/carbidopa/entacapone, selegelina for about 15 years.

These patients have deviation lateral trunk, postural instability and rachis pain, both in the station erect and during the deambulation.

• Pisa Syndrome diagnosis (described like lateral trunk bending more than 10°C toward one side measured on a wall goniometer) due to contraction of paraspinal muscles demonstrated by electromyographic guide;

• Absence of other causes of mechanical restriction to trunk movement (ankylosis, vertebral degenerative process, vertebral rotation and all skeletal disease developed before).

The treatment was intramuscular infiltration of 200 U of Incobotulinum toxin type A (Xeomin®, Merz Pharma) dilutes 1% of the physiological solution at paraspinal muscles, associated with day-today physiotherapy treatment (stretching muscles and postural exercise, 45 min/day). 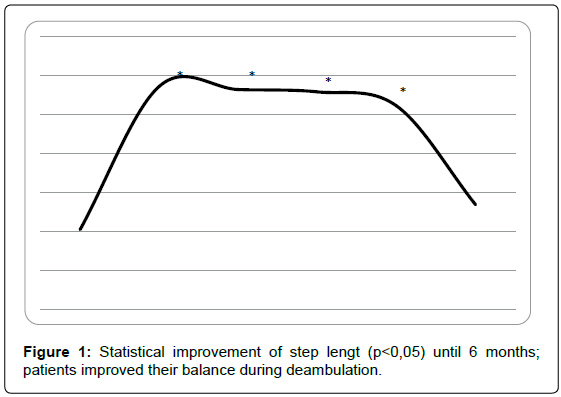 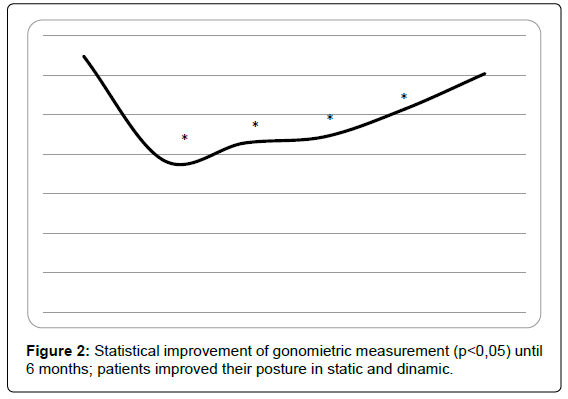 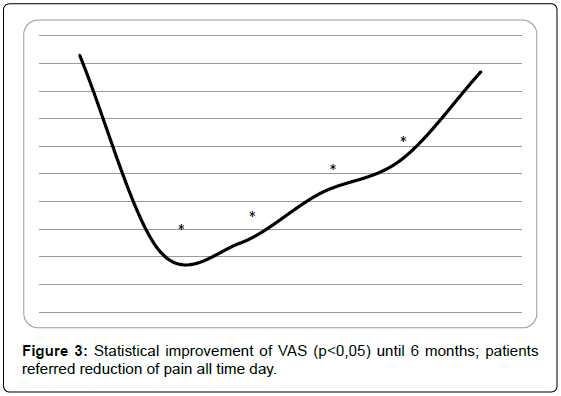 BTX treatment was effective on LAD in all patients at decreasing the lateral bending grading, at determining a lower VAS score and at improving the quality of step cycle with more symmetrical distribution of the loads with consequently better postural setting. Furthermore in kinematic analysis the step length is increased, with a better control of the trunk during walking and increased stability.

Objective examination demonstrated a better control of the trunk and a prolonged maintenance of orthostatic posture with more effective autonomic postural adjustments.

With the baropodometric exam has been objectified a reduction in the distance between the body's center of gravity and the step length, indicating a more symmetrical distribution of the loads skirts, associated with better postural control. In addition, from the dynamic passage analysis, it is increased the step length, measured in mm, which suggests a more adequate control of the trunk even during walking, with increased safety and security of stability in directional changes and relative increased fluidity.

Patients with PD have great difficulty maintaining balance and frequently fall [20,21]. This difficulty is a result of the combination of several deficiencies, including loss of reflexes and postural adjustments, the rigidity of the trunk/ends and akinesia [22,23]. Some authors identified 15 PD-specific risk factors [24,25]. In PD patients fall rate caused by their inability to control their center of mass [26]. They also say that the lack of trunk movement coordination may increase the risk of unbalance and falls; in these studies, patients fell because they did not take a step in the direction of pull to maintain their center of mass over their feet (indicating a deficiency in postural reflexes) [22].

Modulating paraspinal muscles with botulinumtoxinA and physiotherapy we can improve this difficulty to control their center of mass and trunk movement coordination.

Due to this entire factor in patients with PD we could obtain slowdown of the evolution (like cardiopulmonary problem), prevention the risk of PD motor symptoms (like accidental fall) and a better psychological wealth.

Combined treatment botulinum toxin A and physiotherapy modified the impaired proprioceptive biofeedback that contributes to the trunk deviation due to an alteration in the internal representation of posture and should explain why Parkinsonian patients with PS perceive themselves as standing up straight [27-29]. Joint receptors (Golgi tendon organs, free endings, Pacinian corpuscles and Ruffini endings) operate as proprioceptors monitoring constantly the range of motion forces. This makes conscious the subject about the body’s position in space contributing to the perception of verticality and drive the motor response [30,31]. The reduction of joints’ ranges of motion in PD, due to rigidity and bradykinesia, changes the information coming from the periphery to the cortex about the body position and participates to developing of the PS through the impaired motor response [32].

This study demonstrated security of botulinum toxin a treatment in Pisa syndrome. Patients referred no weakness or other local or general side effects.

BTX treatment was effective on LAD with improvement of goniometric grading and VAS scores furthermore it is well tolerated and effective and it could be considered a possible treatment in Parkinsonian patients with LAD not responding to changes of dopaminomimetic treatments.

Despite small number of patients (study could be improve with a large number of patients), our study demonstrated association of botulinum toxin A and physiotherapy could be an effective therapeutic strategy in patients with Pisa syndrome by improving the static, dynamic posture and the control of pain symptoms.