Standard neuroimaging modalities may lack the resolution to identify subtle anatomical alterations and evidence of microstructural tissue injury after CABG. Diffusion tensor imaging (DTI) is a novel MRI technique that may be used to portray a map of the brain neural tracts (tractography) and enable investigation of selected tracts. This modality uses water molecules diffusion measured in six non-collinear directions to provide a three dimensional representation of water motion in the tissue and reveals details about microscopic tissue architecture [7,8].

The primary goal of this study was to assess white and gray matter integrity after CPB-CABG using DTI-MRI and to define the anatomical distribution of microstructural injury. Secondary goals were to determine whether there is a correlation between microstructural white and gray matter injury, represented by DTI indices, BBB-disruption and postoperative neurocognitive deficit.

Each patient enrolled underwent three designated MRI examinations. Baseline MRI was performed one day prior to the operation; postoperative MRI examinations were performed on postoperative day (POD) 1 and 5. The MRI studies were analysed for microstructural brain tissue injury, BBB-disruption and for signs for microemboli using DTI-MRI, DCE-MRI and diffusion-weighted imaging (DWI)-MRI, respectively. The yield of these modalities has been previously detailed [7-10]. Neuropsychological tests were undertaken one day preoperatively (baseline) and on POD 5.

Diffusion-weighted imaging (DWI) evaluation was performed based on the mean DWI volumes in the DTI sequence. A lesion was defined as high signal intensity on DWI as well as low signal in apparent diffusion coefficient (ADC) image. The lesions were counted for each scan (seven patients, three time points).

Spatial normalization and statistical analysis were performed using the SPM software (version 12, UCL, London, UK). Spatial normalization was performed for each patient based on the mean DWI image with similar contrast to the template used in SPM (ICBM template, based on T1 contrast). The normalization parameters were applied on the DTI maps. Spatial smoothing with kernel size of 8 mm full width at half maximum (FWHM) was applied.

Values were extracted in significant clusters and mean ± standard deviation of each time point were presented in graphs.

Fibre tracking was applied using the ExploreDTI software. The principal eigenvectors and FA were used to generate the fibre coordinates, terminating at voxels with FA lower than 0.2 or following tract orientation change higher than 30°. Fibres that passed through a manually chosen seed region of interest (ROI) were plotted. The fibres were plotted as streamlines. Two fibre tracts were reconstructed: Cortico-spinal tract (CST) and superior longitudinal fasciculus (SLF).

CST was reconstructed using seed region of interest (ROI) in axial slices in the cortex and “END” ROI in the internal capsule. Where necessary, in order to eliminate fibres which are not part of the CST, a “no-fiber” plane was drawn in a coronal plane posterior to the CST (in the cerebellum) and in a sagittal plane eliminating fibers crossing to the contralateral hemisphere.

Images were corrected for motion using SPM software (version 12, UCL, London, UK). In short, T1 map was calculated and MR signal intensity of the dynamic scans was converted to Gd concentration. Arterial input function was calculated from the blood signal, the extended tofts pharmacokinetic model was applied and Ktrans, Ve (extracellular–extravascular volume) and Vp (plasma volume) were calculated on a voxel by voxel basis. Smoothing of 4 mm FWHM was performed on the DCE maps.

From the three flip angle images we acquire T10- native T1 (before injection) and S10.

Stripping of head from brain was performed using brain extraction tool. DCE images before and after surgery were spatial normalized by using the SPM software (version 12, UCL, London, UK). Spatial normalization was performed for each patient based on the first dynamic image to the ICBM template, based on T1 contrast. The normalization parameters were applied on the DCE maps. Spatial smoothing with kernel size of 4mm full width half maximum (FWHM) was applied. An average K^trans map was calculated in each time point (pre-surgery, POD1 and POD5).

The Global Cognitive Function score was computed as the average of the index scores.

There was no early mortality, major neurologic events or perioperative myocardial infarction. All preoperative MRI studies were examined by a roentgenologist and interpreted as normal.

POD 1 MRI was performed at mean 22 ± 3 h (range, 19-25) after the operation and at mean 13 ± 2 h (range, 11- 15) after tracheal extubation. All patients were extubated and hemodynamically stable during the transport and MRI examination. The second postoperative MRI and second neuropsychological examination were performed on POD 5 in all patients. Patients did not receive analgesics or sedation 1 h prior to or during the examination. All patients were discharged on POD 6. 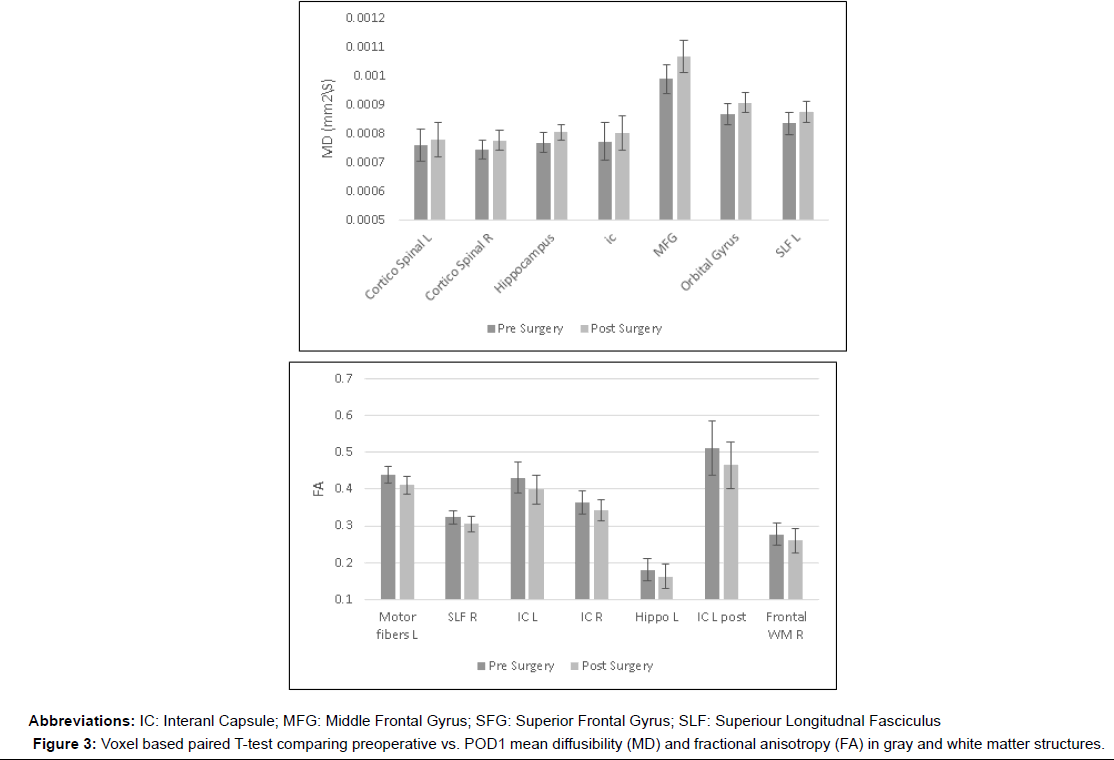 Figure 5: A map of the change in fractional anisotropy before operation vs. postoperative day 5.

These DTI findings persisted on POD 5 (Figures 6 and 7). BBB disruption represented by an increase in the BBB permeability constant - K^trans was demonstrated in five patients (71%) on POD 1. Complete resolution was evident on POD 5 (Figure 8). Figure 8: Average Ktrans of 7 patients demonstrating BBB disruption. BBB-disruption is evident on POD 1 predominantly in the frontal area and restored on POD 5.

DWI signs of embolization were evident in only one patient (14%). 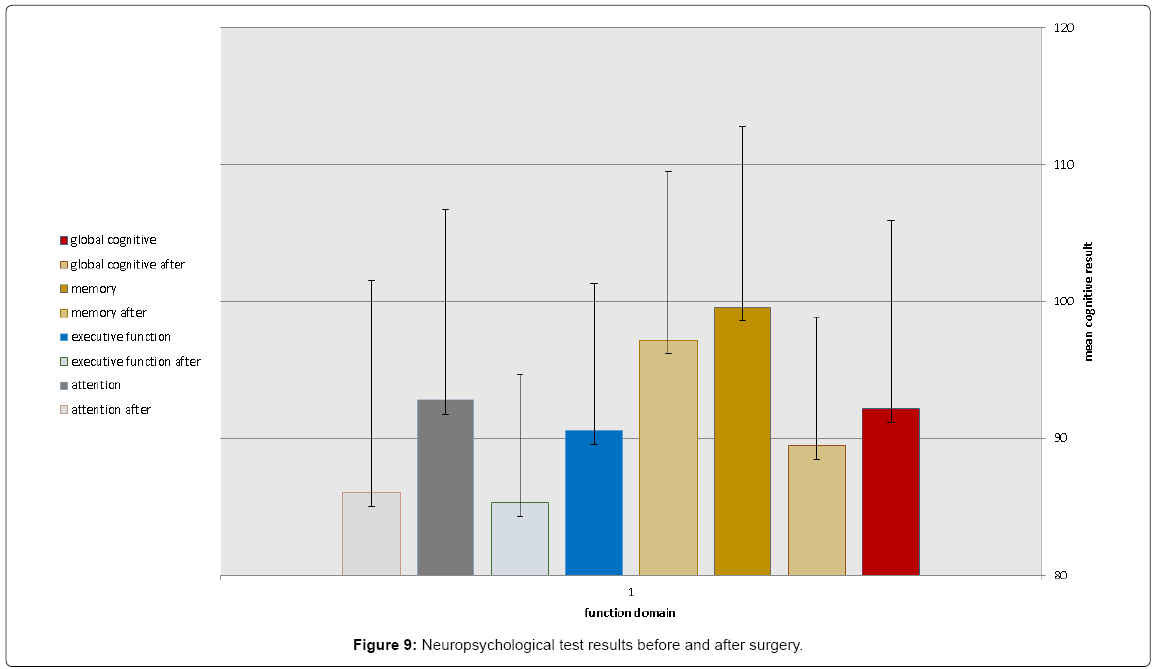 Figure 9: Neuropsychological test results before and after surgery. 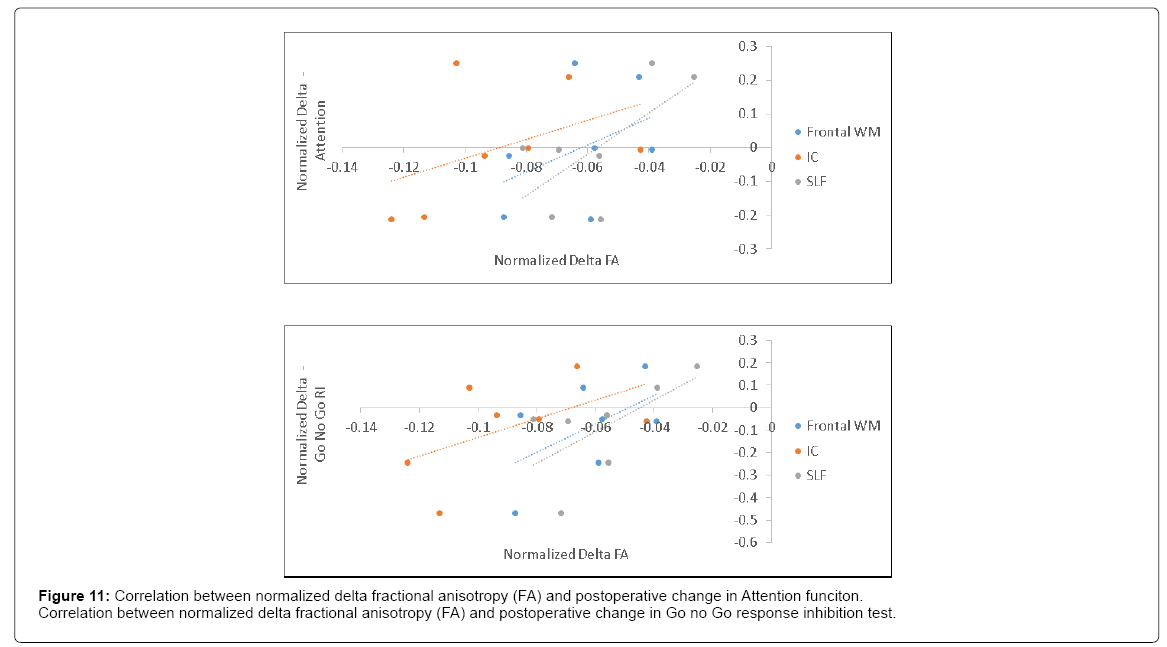 The results of this study indicate that CABG using CPB is associated with microstructural brain injury in white and gray matter. Alterations were evident in white matter structures such as the superior longitudinal fasciculus, frontal white matter, internal capsule and corticospinal tract, and in gray matter structures including the hippocampus, middle frontal gyrus and orbital gyrus. Specific fiber tracking has shown postoperative decrease in number of fibers in the corticospinal tract. Concomitant self-limited BBB-disruption has been demonstrated and may account for these anatomical alterations. Considering neuroanatomical models and the statistical correlation with neuropsychological tests in this study, these anatomical alterations may account for the occurrence of postoperative neurocognitive dysfunction.

To date, available studies have failed to anatomically localize specific damaged zones in the brain that may explain the occurrence of neurocognitive dysfunction in patients that underwent otherwise uneventful cardiac operations. Literature search has yielded 12 studies comprising of 446 patients that describe brain findings in the settings of cardiac surgery using standard MRI or DWI-MRI examinations [3,4,11-20]. The incidence of detected radiological lesions was 29% of patients usually interpreted as cerebral microembolism [11-20]. Nevertheless, the anatomical location of the newly evident lesions could not necessarily explain concomitant findings of postoperative neurocognitive deterioration based on recognized neuroanatomical models [12,13]. Also, correlation was not established between patients who displayed new radiological brain lesion and those who demonstrated postoperative neurocognitive dysfunction [11-20].

DTI is a recently developed MRI modality that provides information about the microstructure of both white and gray matter and can portray a map of the brain neural tracts (tractography). Water molecules diffusion measured in six non-colinear directions is used to form a three dimensional representation of water motion and diffusion- patterns reveal details about microscopic tissue architecture [7,8].

Diffusion parameters calculated for each voxel are mean diffusivity (MD) and fractional anisotropy (FA), representing diffusion-average in all spatial directions and the difference between the largest diffusion vector and other vectors, respectively. Given that axons are in parallel bundles and lateral diffusion is hindered by myelin sheaths, water molecules-diffusion is normally directed along fibers’ direction, represented by increased FA and decreased MD values. Conversely, damage to axons or myelin results in diffusion which is no longer restricted to the axonal direction and overall diffusion increases reflected by decreased FA and increased MD [7,8].

Based on these neuroanatomical models, the sites of postoperative brain alterations demonstrated postoperatively in our cohort consistent with the cognitive deficits shown in the neuropsychological tests. Decreased FA values found in the anterior cingulate/cingulum and part of the ventromedial striatum which are both part of the mediofrontal circuit. Increased MD values found in the medial frontal gyrus and orbital gyrus, which are both part of the orbitofrontal circuit. Decreased FA values detected in frontal white matter (adjacent to the medial frontal gyrus) which is part of the dorsolateral prefrontal circuit.

Injuries in internal capsule and corticospinal motor tract correspond to a decline in Go no Go response inhibition by impeding the motor part of tasks.

In addition to the link between the distribution of neuroanatomical injury and executive functions, alteration in frontal white matter, internal capsule and superior longitudinal fasciculus reflected by decrease in FA may account for attention and Go no Go response inhibition decline. To our knowledge, such correlation between anatomical localization of brain injury and neuropsychological tests after CABG has not been previously documented.

Using DCE-MRI, BBB-disruption has been recently demonstrated after CABG using CPB [15,24]. Loss of BBB integrity was transient and resolved spontaneously within several days [15]. In DCE-MRI modality, BBB disruption is displayed as an increase in BBB permeability constant (K^trans) and enhancement kinetics can be used to extract quantitative information enabling to calculate K^trans for each voxel of the brain image [8]. In the present study a significant statistical correlation has been shown between postoperative delta K^trans indicative of BBB disruption and decrease in FA values reflecting white matter injury. Although BBB-disruption was transient and restored spontaneously, the signs of white matter microstructure injury persisted throughout POD 5.

A mechanism for microstructural brain injury after CABG using CPB is, therefore, suggested. Inflammatory process, alone or in combination with microembolic and/or hypoperfusion events [1,2], elicits BBB-disruption and results in exposure of brain tissue to inflammatory substances, otherwise confined to the vasculature. These untoward substances account for microstructural brain tissue injury. As presented, there are specific brain regions which are more vulnerable to this type of insult. While BBB integrity is spontaneously regained within several days, brain tissue injury apparently persists, explaining the prolonged nature of the neurocognitive dysfunction.

As post cardiac surgery survival has improved substantially in the past decades, emphasis should now be directed toward lowering postoperative sequels, neurocognitive deterioration being one of the most significant.

The power of this pilot study is limited by the small sample-size and subsequent statistical limitations. Neuropsychological studies including a scale to assess mood and affect involvement would have enhanced the validity of the anatomical findings. Also, it seems that non-invasive neurophysiological techniques investigating the functional integrity and connectivity of cortical-spinal tract, such as Transcranial Magnetic Stimulation (TMS) should be included in future studies.

To conclude, CABG using CPB is associated with microstructural white matter injury in the distribution of the superior longitudinal fasciculus, frontal white matter, internal capsule and corticospinal tract and gray matter injury in the distribution of the hippocampus, middle frontal gyrus and orbital gyrus. These alterations are evident early after surgery and persist throughout POD 5. Whether these microstructural changes are permanent or eventually reversible remains undetermined and should be the focus of further study. The anatomical distribution of white and gray matter injury may explain the occurrence of postoperative neurocognitive dysfunction. Larger datasets are required to validate these observations.

Copyright: © 2017 Abrahamov D, et al. This is an open-access article distributed under the terms of the Creative Commons Attribution License, which permits unrestricted use, distribution, and reproduction in any medium, provided the original author and source are credited.