Extraction constants (Kex±) for the extraction of sodium salts (NaA) with 18-crown-6 ether (18C6) from water (w) into nitrobenzene (NB) were determined at 298 K, together with the determination of individual distribution constants (KD,A) of several pairing anions A−. The symbols Kex± and KD,A were defined as [NaL+]NB[A−]NB/([Na+][L]NB[A−]) at L = 18C6 and [A−]NB/[A−], respectively; the subscript “NB” shows the NB phase. Also, ion-pair formation constants for sodium 2,4-dinitrophenolate (NaDnp) and its ion pair complex with 18C6 in water were determined by potentiometry with a Na+-selective electrode. Standardized (S) KD,A values were briefly calculated from the following thermodynamic cycle: KD,A S = Kex±/KD,Na SKNaL,NB. Here, KD,Na S and KNaL,NB denote the standardized individual distribution-constant of Na+ into and a complex formation constant for NaL+ in the NB phase, respectively. Moreover, equilibrium potential differences (Δφeq) at the NB/w interface were estimated from the relation Δφeq = 0.05916log (KD,A S/KD,A) at 298 K. The Δφeq values of A− = F3CCO2 −, MnO4 −, ReO4 − and Dnp− were determined for comparison with the value of picrate ion. The plot of log Kex± versus Δφeq gave a positive correlation at (correlation coefficient)2 = 0.748.

Individual distribution constants (KD,M and KD,A) of cations {Mz+ with the formal charge of z (= 1, 2)} and monovalent anions (A−) are generally important for the determination of equilibrium constants, such as complex formation (or stability) constants (KML,org) for MLz+ and acid dissociation ones of HA in organic (o or org) phases, in electrochemistry at water/o solution interfaces [1-5]. With respect to these distribution constants, the authors have proposed the presence of interfacial equilibrium potentials (Δφeq) in solvent extraction processes with such interfaces and determined so far many Δφeq values by applying this idea to the monovalent or divalent metal extraction with crown compounds (L) [6-10]. Here, the Δφeq values have been obtained from the relation [2,8], Δφeq = ΔφPic0′− 0.05916log KD,Pic at 298 K, based on the standardized formal potentials (ΔφPic0′) for the transfer of picrate ion (Pic−) across the nitrobenzene/water (NB/w) [7-9,11], benzene (Bz)/w [10], dichloromethane (DCM)/w [6,11] or 1,2-dichloroethane (DCE)/w interface [6,8]. On the other hand, there are systematic studies for many A− distribution from water into DCE or NB in the KD,A determination, using the CsA extraction with 24-crown-8 ether derivative [12] or the extraction of single salts [1,13], MA or MA2. However, the no relation between KD,A and Δφeq had been reported in these extraction studies [1,12,13]. Therefore, it is difficult to check whether the KD,A values experimentally-obtained are equivalent to those standardized at Δφeq = 0 V (namely the KD,AS {= exp(ΔφA0′/0.02569) at 298 K [2,8]} values) or not. According to our previous paper [14], KD,AS has been electrochemically derived at Δφeq =0 V from the equation

being the same as that [2] described above. Here, the minus sign of the right hand side (rhs) of this equation comes from the formal charge of A− [11,14].

In order to clarify the presence of Δφeq for the transfers of other A− at the NB/w interface, as well as its presence for that of Pic−, we performed here extraction experiments of sodium salts, NaA, by 18-crown-6 ether (18C6) into NB at A− = MnO4−, ReO4−, F3CCO2− and 2,4-dinitrophenolate ion (Dnp−). For increasing the actual distribution efficiency of A(−I) and Na(I) as much as possible, 18C6 was used in the above extraction systems as the more effective L, compared with benzo- 18C6 and dibenzo-18C6 [15]. This idea had been actually employed by Levitskaia et al. [12]. Also, NB was used as a diluent for facilitating the dissociation of the ion-pair complex Na(18C6)+A− extracted in the o phase and then this caused totally an increase in extraction-ability of Na(I). Moreover, the ion-pair formation constants, KMAM0 and KMLA0, for NaDnp and Na(18C6)+Dnp− in water at I → 0 mol dm−3 were determined at 298 K by potentiometry [16] with a commercial Na+- selective electrode (Na+-SE). Here, the symbol I refers to ionic strength of the aqueous solution with Na+Dnp− or Na(18C6)+Dnp−. 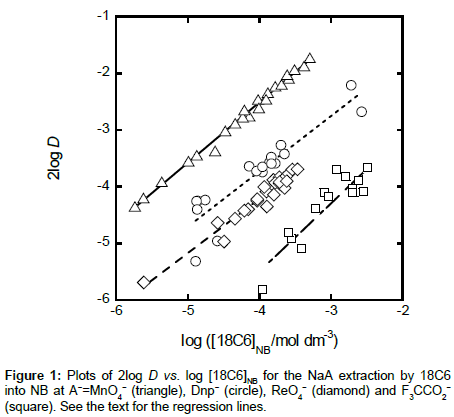 The following cell was used for the determination of the KMA0 and KMLA0 values: Ag|AgCl|3.3 mol dm−3 KCl|0.1 mol dm−3 (C2H5)4NCl|test solution|Na+-SE. Here, the test solutions were aqueous solutions of NaCl for preparing calibration curves and those of NaDnp and its solutions with 18C6 for the KMA0 - and KMLA0-determination, respectively. Experimental slopes of the calibration curves were in the ranges of 59-74 mV/decade for the NaDnp system, 57-62 for NaPic, 69-76 for NaDnp-18C6 and 65-76 for NaPic-18C6.

The emf values of the above cell were measured at 25 ± 0.3°C using a Horiba pH/ion meter (type F-23) equipped with a Horiba Na+-SE (type 1512A). Liquid junction potentials (ΔELJ) at the 0.1 mol dm-3 (C2H5)4NCl|test solution interface in the cell were not corrected. An effect of this treatment was examined by determining the the KMA0 and KMLA0 values at MA = NaPic and MLA = Na(18C6)Pic, respectively (see below).

The following equations were used for the determination of the KMA0 and KMLA0 values [16]. 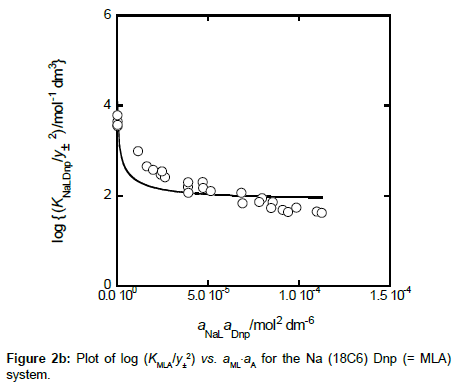 In order to check the accuracy of these values, the KNaPic0 and KNa18C6Pic0 values were determined potentiometrically: KNaPic0 = 7.7 ± 0.5 mol−1 dm3 with bs = (5.1 ± 0.5) × 10−4 mol dm−3 at R2 = 0.941 and KNa18C6Pic0 = 136 ± 15 with b = (6.8 ± 0.5) × 10−4 at R2 = 0.960. The former value is close to that (= 4.2 mol−1 dm3 [16]) reported before. On the other hand, the latter value is two-times larger than the literature one (= 62 [16]). These facts indicate that the KNaDnp0 value which was thus determined is essentially reliable, while the KNa18C6Dnp0 value is an approximate (see below for the analyses of extraction data). Additionally, it can be important that we obtained to a certain degree the reliable KMA0 and KMLA0 values without troublesome corrections of the ΔELJ values in the emf measurements. Hence, the two values were used for the calculation [17-19] of the [Na+], [18C6]NB, and [Dnp−] values in the analyses on the extraction experiments (see Appendix A). Moreover, we think that this simple procedure has a possibility for the KMA0 - and KMLA0 - determination, namely can become the procedure without the troublesome ΔELJ corrections.

Determination of composition of the extracted species

Determination of the KD,A, Kex± and Kex values

The KD,A, Kex± and Kex values were determined by the same methods as those [6,8,10,11,17] reported before, together with the K1,org (= Kex/ Kex±) value. That is, the following extraction constants parameters (Kexmix) [6,8,10,11,17] were fundamentally used for the determination: 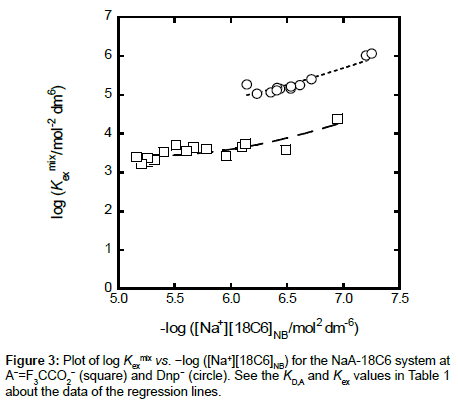 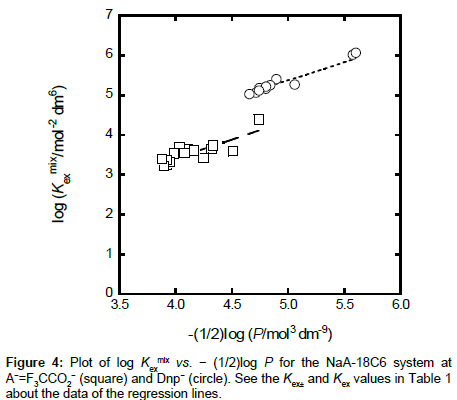 The K1,org value is easily calculated from the above relation [6,8,10,11,17]. Also, the KD,NaL (= [NaL+]NB/[NaL+]) values at L = 18C6 were estimated from the relation, INBKD,L/(KNaL[Na+][L]NB), in each run. Here, KD,NaL, KD,L and KNaL denote the individual distribution constant of NaL+, that (= [L]NB/[L]) of L into the NB phase and the complex formation constant (= [NaL+]/[Na+][L]) for NaL+ in water, respectively (see Appendix A): these latter two values were available in references. Table 1 lists the above equilibrium constants determined at 298 K.

When the KD,MS value, KD,M at Δφeq = 0 V, is available from some references and the Kex± value was obtained from the present extraction experiment, the KD,AS value can be easily calculated from the following thermodynamic relation:

Similarly, KML,org is introduced as the reference value in this equation: log

So we can immediately obtain the Δφeq and ΔφA0′ values from Equations (1a) and (1b), respectively. Of course, the KD,A values can be determined experimentally (Table 1).

Furthermore, the KD,MLS values averaged were calculated from two procedures as follows. (A): procedure estimated from a thermodynamic cycle. Its cycle is

(B): procedure estimated from the Δφeq and KD,ML values. Its equation is

which is derived from Δφeq = ΔφML0′ + (2.303RT/F)log KD,ML with log KD,MLS = −(F/2.303RT)ΔφML0′ at z = 1. The experimental KD,ML values were individually calculated from the relation KD,ML ≈ [A−]NB/[ML+] (= INBKD,L/KML[M+][L]NB) under the approximate condition (see the footnote f in Table 1) of [A−]NB ≈ [ML+]NB, which comes from the charge balance equation [A−]NB = [M+]NB + [ML+]NB {see Equation (B1) in Appendix B, supplementary information}, and then their values were averaged. Here, the fact that the Δφeq value is in common for a given extraction system was over-interpreted in the mean calculation {see Equation (1a)}. The above procedures, (A) and (B), are described as fundamental ones in the calculations, although other procedures were able to be considered practically and were tried. The KD,AS, Δφeq and KD,NaLS values obtained from the above are listed in Table 2, together with the ΔφA0′ values. 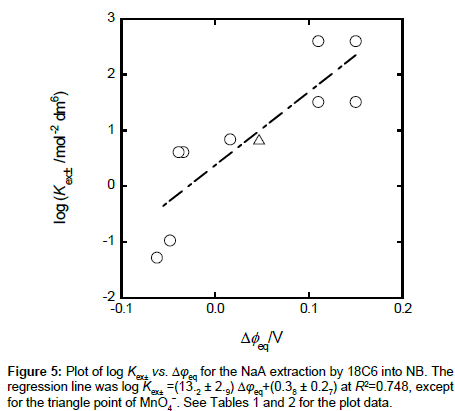 Moreover, the log KD,A values can cause the larger deviation of the plots from the regression line (Figure 5), because their values are not constant among A− employed. This is proved by the plot of log (Kex±/KD,A) versus Δφeq. The regression analysis of this plot yielded the equation, log (Kex±/KD,A) {= log ([NaL+]NB/[Na+][L]NB)} = 15.3Δφeq + 2.4 at R2 = 0.896. This improvement on R2 clearly shows a variance effect of log KD,A. 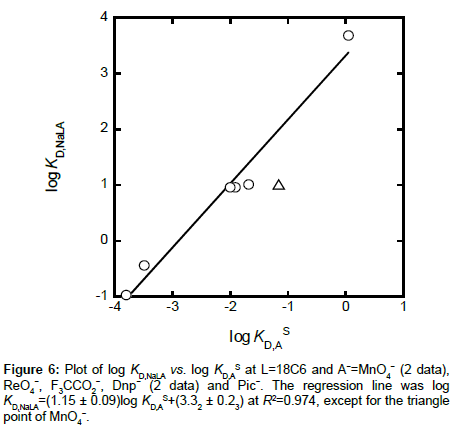 The authors clarified the presence of Δφeq at the NB/w interfaces in the NaA extraction systems with 18C6, as well as the NaPic extraction one. Also, the positive correlation of log Kex± to Δφeq among A− was observed in a given combination of Na+, NB, and 18C6. This fact makes the previously-reported correlation among L in given combinations of NaPic and diluents more-sure. Moreover, it was demonstrated that this method makes the ΔφA0′- or KD,AS-determination of a single A− having the lower extraction-ability easier. In particular, using the more general L, such as 18C6, is important for the present method, because this promises the high versatility of the method.

Copyright: © 2016 Kudo Y, et al. This is an open-access article distributed under the terms of the Creative Commons Attribution License, which permits unrestricted use, distribution, and reproduction in any medium, provided the original author and source are credited.