An 86-year-old woman presented to the emergency department with recurrent syncope. Her medical history was significant for aortic stenosis.

Calcinosis cutis with ulceration on both lower limbs for about 40 years. Multiple surgical therapies including excisions of ulcerated areas on both legs were performed in the last years. In addition she suffered from a sclerosis of the deep leg veins with severe chronic venous insufficiency (CVI). She had chronic renal disease with normal serum calcium and phosphorus levels, arterial hypertension and hypercholesterolemia.

Moreover, it was sonographically a severe insufficiency of the Vena saphena magna and parva on both sides, and massive calcification of the veins along the two lower legs. This year the patient once suffered from bloody secretions of the left ear [1].

The physical examination was notable for white yellowish, hard, painless lump and small fibrinous ulcerations surrounded by erythema left pretibial (Figure 1). And a systolic ejection murmur, with a maximum in the 2nd ICR right parasternal with radiation in the carotids. 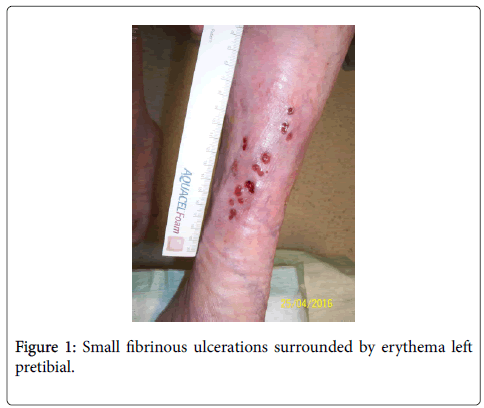 Findings didn't show any evidence of an acute coronary syndrome in the emergency room. The echocardiography revealed left ventricular hypertrophy with normal systolic LV function (ejection fraction 55%) and calcification of aortic and mitral valves. Doppler sonography revealed mean gradient of 67 mmHg on the aortic valve corresponding to sever aortic stenosis (Figure 2). The gradient on the mitral valve was normal. Doppler sonography showed calcified intima of both femoral arteries. The X-ray image of the left lower leg showed the calcification of the skin layers.

Due to symptomatic aortic valve stenosis indication for aortic valve replacement was established. Interdisciplinary heart-team made the decision for treatment by transcatheter aortic valve implantation (TAVI) because of high perioperative risk (EuroScore II 6.6%, and STS-Score 7.9%). The computer tomography angiography was carried out in preparation for TAVI (Figure 3). This showed a pronounced calcification of small and medium-sized vessels but no relevant stenosis in femoral and iliac arteries, and thus allowing transfemoral access for TAVI procedure. The aorta didn’t show high grade calcification.

In another hospital, a right and left catheterization of the heart performed. This showed as well severe coronary atherosclerosis without need to intervention. Additional preoperative diagnosis as Doppler of the femoral vessels showed femoral as a calcified intima of the artery.

In another hospital, a right and left catheterization of the heart performed. This showed as well severe coronary atherosclerosis without need to intervention. Additional preoperative diagnosis as Doppler of the femoral vessels showed femoral as a calcified intima of the artery.

In all cases of Calcinosis cutis, insoluble compounds of calcium are deposited within the skin due to local and/or systemic factors. These calcium salts consist primarily of hydroxyapatite crystals or amorphous calcium phosphate [3]. The pathogenesis of Calcinosis cutis is still not completely understood and a variety of factors allow for different clinical scenarios to occur.

It should be discussed from which subtype the patient is affected and the pathophysiology of cardiac involvement with vascular calcification.

The symptoms and the underlying condition may indicate partially a calciphylaxis. So the ulcerations in a calciphylaxis are painful. Calciphylaxis presents with small vessel calcification mainly affecting blood vessels of the dermis or subcutaneous fat.

Disturbances in calcium and phosphate metabolism and hyperparathyroidism can be observed [4].

Our patient doesn't have painful ulcers, and has a normal serum calcium and phosphorus levels. Therefore calciphylaxis is unlikely in this case.

The patient has most likely a Calcinosis dystrophic. This subtype shows calcification of vessels, thrombosis, phlebitis, painless ulcerations and a normal serum calcium and phosphorus levels.

Recently, great interest has focused on understanding how atherosclerotic pathology is related to a common plaque constituent: calcium mineral deposits. Important studies in the last decade have now spawned a model wherein calcification in atherosclerotic plaque is viewed as an active complex and therefore presumably regulated process that exhibits intriguing similarities to formation, or remodelling from other tissue like skin and bones [5]. There is an association between anti-centromere antibodies and Calcinosis and atherosclerosis [6,7]. The pathology may be propagated by micro vascular insufficiency, inflammation and local tissue damage in the vessels [8].

A cardiac involvement under Calcinosis is not sufficiently described in the literature. We present a rare case with pronounced cardiovascular involvement including diffuse calcification of small and medium-sized arteries, deep leg veins, moderate mitral valve and severe aortic stenosis. It is common to have aortic stenosis and a mild calcified coronary artery in a 86 year old woman, but due to this pronounced combination with dystrophic calcification should be in this dimension considered. Due to extent of valvular calcification it is likely that Calcinosis cutis was involved in pathogenesis of the cardiac disease in our patient, however exact mechanism is still not understood. A careful clinical examination and eventually echocardiography should be considered in patients with Calcinosis cutis to diagnose possible cardiovascular involvement.

Copyright: © 2017 Alboji A, et al. This is an open-access article distributed under the terms of the Creative Commons Attribution License, which permits unrestricted use, distribution, and reproduction in any medium, provided the original author and source are credited.