Calculation improvement of the clay content in the hydrocarbon formation rocks

Copyright: © 2017 Al-Obaidi SH. This is an open-access article distributed under the terms of the Creative Commons Attribution License, which permits unrestricted use, distribution, and reproduction in any medium, provided the original author and source are credited.

Natural radioactivity of reservoir rocks of oil and gas East Baghdad is due not only to their content of clay material, but also the existence of uranium that located in the skeleton of rocks. In connection with this, for the shale content determination of reservoir rocks, it is necessary to exclude the uranium contribution from the overall intensity of the gamma radiation. The paper presents the results of a research, using the data of spectral (standard) gamma ray logs –SGR , in which more accurate determination of the shaliness in the productive zones of the Zubair section of East Baghdad fields (In Iraq) is proposed. With the help of a computer program, a formula that allows us to remove the effect of uranium, which affects the readings of gamma ray logging, is obtained.

As indicators of the clay content and shale in the formation rocks, unsealed by a well, many types of logging can be used, in particular the spontaneous potential (SP), density, neutron, and gamma ray logging. Gamma ray tools record naturally occurring gamma rays in the formations adjacent to the wellbore. This nuclear measurement indicates the radioactive content of the formation rocks. Effective in any environment, gamma ray tools are the standard devices that used for the correlation of logs in cased and open holes. One of the most effective gamma ray log tools, based on the measurements of the natural radioactivity of the formation rocks, was proposed in 1980. Its readings are analysed from the point of view of determining the nature and quantity of radioactive elements [1]. The tool can be considered as an improved indicator of clay content of the formation rocks. This logging device detects the presence of Uranium U, Thorium Th and Potassium K in rocks, and subjected to determine the volumes of these radioactive minerals. After calculation of the content of Uranium, Thorium and Potassium by the method of weighted least squares the total gamma intensity of the radiation can be represented as a linear combination of the intensities of radiation of each of the elements. Since the presence of clay affects the results of the determination of petro physical parameters of formation rocks, such as saturation and porosity, it is necessary to introduce relevant corrections to the clay content [2]. Different Bulk clay volumes for many intervals of Zubair section was determined using two different gamma ray logs data (spectral gamma ray log, SGR and corrected gamma ray, CGR). The CGR log is the log at which the effect of Uranium is excluded from the overall gamma ray intensity of the formation rocks.

The interpretation data of gamma ray logs could be used as a single indicator of clay content of the formation rocks based on the following basic relationship [3]:

Iγ (min) , minimum intensity of the radioactivity corresponding to the clean formation rocks.

Iγ (max) , maximum intensity of the radioactivity corresponding to the formation of net clays.

Iγ , the intensity of the natural radioactivity of the formation rocks studied.

In practice, there are two types of logging curves of gamma ray (GR). The first corresponds to a standard curve of GR, where GR indications represented as a linear combination of the radioactivity of potassium, thorium and uranium, in accordance with the following equation:

Since the existence of uranium is associated most with radioactive materials of the formation rocks other than those found in clay [1], such as organic sediments, then the data of CGR log can significantly reduce the distorting effect of slit and organics on the assessment of the shale in the reservoir rocks. Therefore, CGR log is considered to be a good indicator of clay content. To determine the shale volume of the formation rocks, using the data of the CGR log, equation -1 is used. Due to the fact that CGR log is not always available in well logging complex due to its high cost, the data of SGR log undertaken for sand bodies in wells where CGR log is recorded (EB-55, EB-56, EB-77, EB-79), at the same sand bodies depths of wells (EB-18 and EB-15) where the CGR is not recorded, are used in a regression program together with data of the CGR log data. This regression program has been developed to give a linear relationship to determine the values of corrected, using the data of standard GR log, as shown in Figure 1. In this figure the data of standard gamma ray log and corrected gamma ray log are plotted to obtain a single fundamental equation, which can be further applied to each interval of Zuba section; 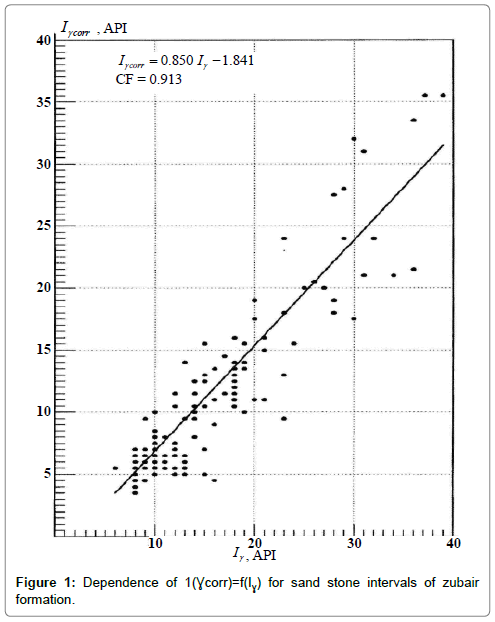 As a result, it is found that the proposed method at which excludes uranium effect from the overall intensity of the gamma radiation, gives a better estimation of clay content of formation rocks than the original method which takes into account the presence of the uranium component. As consequence this will lead to a more accurate determination for the petro physical parameters of the formation rocks, such as saturation and porosity, and consequently to more accurate hydrocarbons reserve estimation.