Forest vegetation and soils constitute a major terrestrial carbon pool with the potential to absorb and store carbon dioxide (CO2) from the atmosphere. The CO2 source and sink dynamics as trees grow, die, and decay are subjected to disturbance and forest management. Evidence of climate change linked to human-induced increase in greenhouse gas (GHG) concentrations is well-documented in international studies [1,2]. To contribute to reduction of GHG emissions, and to partly offset deforestation, the Kyoto protocol (KP) explicitly considered reforestation and afforestation activities for carbon sequestration accounting [2]. The recognized importance of forests in mitigating climate change has led countries to study their forest carbon budgets and initiate the assessment of enhancing and maintaining carbon sequestration of their forests resource.

Biomass production in different forms plays important role in carbon sequestration in trees. These carbon pools are composed of live and dead above and below ground biomass, and wood products with long and short life and potential uses. Above-ground biomass, belowground biomass, dead wood, litter, and soil organic matter are the major carbon pools in any ecosystem [3-5].

Estimates of carbon stock in forest plantations are generally based on allometric equations relating either carbon or biomass to diameter at breast height (DBH). Several authors have reviewed the use of allometric functions for biomass estimation. These equations are usually based on measurement of the fresh mass of each tree with subsamples taken to determine moisture content to convert to dry weight.

Statement of the problem

Climate change, caused by global warming, is a phenomenon partly resulting from abundance of carbon dioxide in the atmosphere. It is the most pressing environmental problem of the world today. It persists, and it cannot be stopped. Rather, it can be mitigated. Plantation systems as land use can reduce the atmospheric concentration of carbon dioxide. Carbon sequestration through forestry plantations has a huge potential in ameliorating global environmental problems such as atmospheric accumulation of carbon dioxide and related climate change. In Ethiopia Eucalyptus saligna, Cupressus lusitanica, Grevillea robusta and Pinus patula are among common exotic plantation species. They grow fast, a characteristic that makes them remove more CO2 from the atmosphere than they would release. Little researches have been done in estimating carbon aboveground and belowground of plantation species in Ethiopia. This study therefore aimed to generate data on the carbon stocks of four selected tree species plantations located within the Wondo Genet College.

Significance of the study

Study on carbon sequestration potential of Eucalyptus saligna, Cupressus lusitanica, Grevillea robusta and Pinus patula plantation is important because it provides basic information on the potential effect of plantations and reforestations on the environment particularly land resources. Estimation of total plant biomass and soil carbon sequestered in any forest system is important as it gives ecological and economic benefits to the local people and environment. It was also enable growers, policy makers and development practitioners to have better knowledge as to where and how to focus in Eucalyptus saligna, Cupressus lusitanica, Grevillea robusta and Pinus patula plantation to bring a better environmental and economic achievements. Generally, the significance of this study is to know the carbon sequestration potential of above four selected plantation species.

1) To estimate above and below ground carbon stock of selected tree species plantations.

The study was conducted in Wondo Genet College of Forestry and Natural Resources, which is located in north eastern direction from the town of Hawassa and about 263 km south of Addis Ababa. It lies between 38037’ and 38042’ East longitude and 7002 and 7007’ north latitude. Landscape of the study area varies with an altitude ranging between 1600 and 2580 meters above sea level.

The study area is categorized under Dega (cold) agro-ecological zone at the upper part and Woina Dega (temperate) agro-ecological zone at the lower part of the area. The rainfall distribution of the study area is bi-modal, where short rain falls during spring and the major rain comes in summer and stays for the first two months of the autumn season. The annual temperature and rainfall range from 17°C to 19°C and from 700 mm to 1400 mm, respectively [6-10]. In general, the climatic condition of the area is suitable for production of both common food and cash crops. The area has fertile soil and the loam sand texture soils contain most important nutrients (Figure 1). 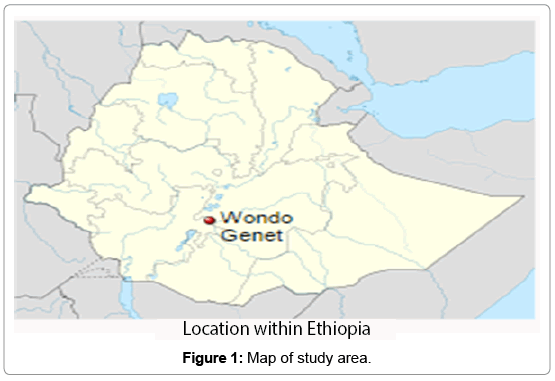 Sample size: Given the limitations of the sampling theory, the number of sample plot for biomass estimation (in other terms, the sample size) is generally selected empirically, based on rules established by experience. A general principle is that, for any given precision, the more variable the material, the larger the sample size: smaller sample sizes are required for a plantation. Thirty (30) number of sample plot for Single, homogeneous plantation site was recommended by Picard et al. Based on this experience a total of 36 sample plots were taken for estimation of selected tree plantation biomass.

Vegetation survey: Biomass data was collected at different age intervals (5-10 years, 11-15 years and ≥ 16 years) of tree plantation species. At each age interval of tree plantation three (3) sample plots were selected for each species. A plot of 20 m × 20 m was established randomly in all study sites. Diameter at breast height (Dbh) of each tree (≥ 10 cm) within 20 m × 20 m sample plot was measured by using caliper and height of each tree was measured by using hypsometer. Trees with multiple stems at 1.3 m height was treated as a single individual and DBH of the largest stem was measured. A canker, gall or branched trees at 1.3 m was measured the smallest point below it where the stem assumes near cylindrical shape. Trees with multiple stems or fork below 1.3 m height were treated as a single individual stem [11]. To estimate the above ground biomass of all trees within selected site having DBH > 10 cm was recorded. These inventory data were used to calculate stocking (stems ha-1), basal area (m2 ha-1), and for scaling of biomass.

Soil sampling: Soils were sampled in the same sub sample plots as litter. After the litter is removed, a 30 cm soil pit is dug and two subsamples at a depth of 15 cm interval were collected in a vertical slice of the pit wall with a knife. Soil samples were taken at 30 cm depth from the four corners and at the center of each plot. The soil sample was mixed homogeneously, and 100 g sub-sample was taken from each sample for laboratory analysis. Each and every sample was labeled carefully. The soil samples were used for organic carbon determination in the laboratory (Figure 2). 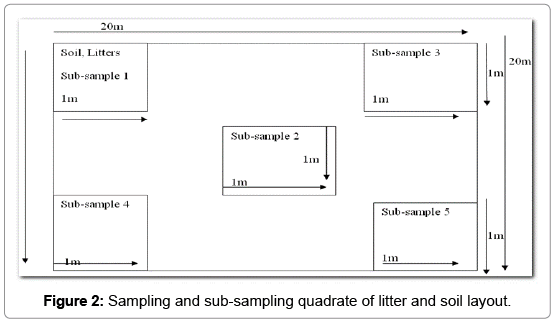 Figure 2: Sampling and sub-sampling quadrate of litter and soil layout.

Aboveground biomass estimation: Above-ground biomass comprises all woody stems, branches, and leaves of living trees, creepers, climbers, and epiphytes as well as understory plants and herbaceous growth. For agricultural lands, this includes trees (if any), crops and weeds. In this study, the total carbon stock sequestration of tree species were determined by nondestructive methods which include, field survey, laboratory analysis and allometric equations. Species specific allometric equations were applied to mean d.b.h of each tree species to calculate the biomass accumulation in different tree components.

Total aboveground biomass of trees was estimated using a regression equation developed by Henry et al. [7] for sub-Saharan African forests: These equations are as follows:

Eucalyptus saligna, in Kakamega forest in Kenya in 2002.

Cupressus lusitanica in Usambaras in Tanzania.

Pinus patula in Kakamega forest in Kenya in 2002.

Where Y represents the total dry aboveground biomass of a tree in kg, X is the diameter of the tree in cm and W is the height of tree in m. The corresponding carbon content in biomass will be estimated assuming 50% of carbon in the biomass as per IPCC in 2003.

Finally, carbon content in the biomass was estimated by multiplying of 0.5 while multiplication factor 3, was used to estimate CO2 equivalent as per IPCC in 2003.

Litter biomass estimation: The forest floor, or litter layer, is defined as all dead organic surface material on top of the mineral soil. Some of this material will be still recognizable (for example, dead leaves, twigs, dead grasses and small branches) and some will be unidentifiable decomposed fragments of organic material.

Samples litter of all the species were collected for determination of carbon content percentage in the laboratory using loss-on-ignition (LOI) method in a muffle furnace. LOI method involves combusting samples at high temperature and measuring the weight loss, which is an inexpensive, convenient and accurate method to estimate organic carbon. In the laboratory, after taking the fresh weight, the litter samples were dried in the oven for 1 hour at 105°C to get dried weights. Oven dried grind samples were taken (5.00 g) in pre-weighted crucibles. The crucibles were placed in the furnace at 550°C for 4 hours. Crucibles were cooled slowly inside the furnace. After cooling, the crucibles with ash were weighted for calculation of percentage of organic carbon.

The biomass of litter was estimated by using the following equation:

Wfield = Weight of wet field sample of litter sampled within an area of size 1 m2 (g);

A = Size of the area in which litter will be collected (ha);

W is the sub-sample, (dry) = Weight of the oven-dry sub-sample of litter taken to the laboratory to determine moisture content (g), and

W is the sub-sample, (fresh) = Weight of the fresh sub-sample of litter taken to the laboratory to determine moisture content (g) [11].

After the data collection was completed, data analysis of various carbon pools measured in the closed public parks were accomplished by organizing and recording into the excel sheet and different comparison graphs and tables. In order to apply models for biomass estimation, the data obtained from DBH and Height of each species were used, weight of litter and soil were analyzed using Statistical Package for Social Science (SPSS) software version 16. 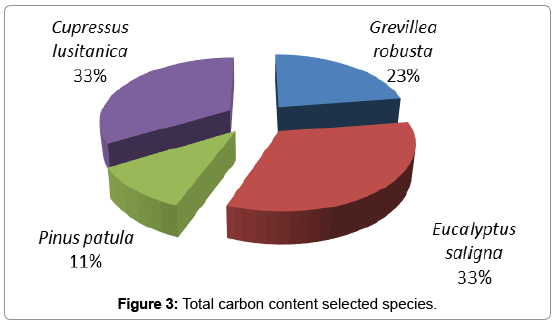 Estimating carbon storage species at different age is essential for assessing the role of forest ecosystems in regional and global carbon management. These results indicate that Eucalyptus saligna and Cupressus lusitanica were accumulated large amounts of biomass Carbon, both above and below ground followed by Grevillea robusta and Pinus patula respectively. In this study, biomass Carbon storage of species plantations at three stand ages were between 12.7 and 43.1- ton ha−1. Tree biomass constituted a major part of the biomass Carbon pool and increased rapidly with plantation age in both the above- and belowground (root) fractions, similar to trends observed in other forests [16-18].

The highest rate of accumulation was observed in above sixteen years-old stands of Eucalyptus saligna, Cupressus lusitanica, Pinus patula and Grevillea robusta and the average carbon storage 43.087 t/ ha) were slightly lower than that reported for above selected species 55 t/ha [19].

Copyright: © 2018 Yirdaw M, et al. This is an open-access article distributed under the terms of the Creative Commons Attribution License, which permits unrestricted use, distribution, and reproduction in any medium, provided the original author and source are credited.