Copyright: © 2016 Wagner E, et al. This is an open-access article distributed under the terms of the Creative Commons Attribution License, which permits unrestricted use, distribution, and reproduction in any medium, provided the original author and source are credited.

A 25-year-old, otherwise healthy female patient was referred to our clinic with a history of right ankle pain present for one and a half years, which was exacerbated with dorsiflexion, which lasted for one and a half years. The patient was a recreational runner and denied any trauma or steroid intake, and she did not complain of ankle instability either. Clinically a tense band was noted in relation to the tibialis anterior tendon, which seemed to bowstring (Figure 1). The local skin presented with a slight erythema and the subcutaneous adipose tissue appeared atrophied, as well as other muscles of the anterolateral compartment on the leg. She had pain related to the tibialis anterior tendon with dorsiflexion, and there was no palpable defect in the extensor retinaculum. She had no ankle instability. 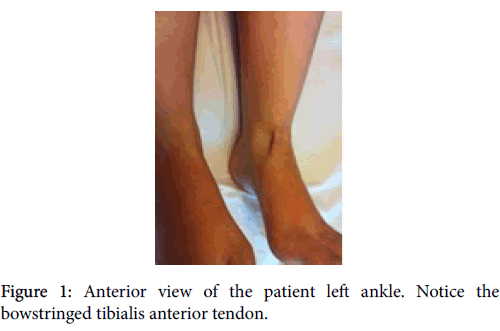 Ultrasound and Magnetic Resonance showed a rupture of the superior portion of the extensor retinaculum, and full integrity of the extensor and dorsiflexors muscles and tendons (Figure 2). The laboratory exams, including rheumatological studies, where non remarkable. The patient failed a two month course of conservative treatment including rest, brace and non-steroidal anti-inflammatory drugs. The patient remained symptomatic, with pain related to the bowstringed tibialis anterior tendon and in the last couple of weeks before the intervention. 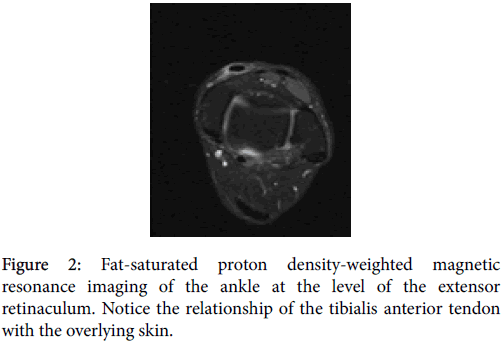 Figure 2: Fat-saturated proton density-weighted magnetic resonance imaging of the ankle at the level of the extensor retinaculum. Notice the relationship of the tibialis anterior tendon with the overlying skin.

Pain in the extensor hallucis longus (EHL) tendon had developed, due to overpulling of the tendon trying to compensate the relative loss in tibialis anterior tendon function. Given failure of conservative treatment and new onset pain to EHL, surgical intervention was recommend. As no objective reason could be found to explain the rupture, he authors felt that a graft was necessary to augment the direct repair of the retinaculum. Because of her young age and the theoretical advantage of using host tissues as graft, we chose a fascia lata graft to use as a reinforcement of the repair. Surgery was performed in supine position, under spinal anesthesia and using a thigh tourniquet. A 4 cm width × 5 cm length fascia lata autograft was harvested from the right thigh (Figure 3). An ankle anterior approach over the bowstringed tibialis anterior was performed, finding extensive scar tissue and a complete rupture of the superior ankle extensor retinaculum; only the stumps were present, showing a retracted mop-end appearance (Figure 4). Moderate inflammatory reaction around tibialis anterior tendon and extensor hallucis longus was found, but the tendons themselves were intact. Biopsy of the retinaculum stumps and the surrounding synovial tissue was performed. Resection of the scar tissue and regularization of the stumps was performed by sectioning the ends of the stumps until normal tissue appearance. The retinaculum was then reconstructed using the fascia lata autograft previously obtained. For the lateral attachment, the graft was passed through the remaining native retinaculum in a pulvertaft fashion and rescued laterally over the lateral portion of the remainder tissue, and sutured using a fiberwire N 2 (Figure 5). Figure 5: Intraoperative picture while adapting the fascia lata graft and performing a pulvertaft-like weave of the fascia through the remaining lateral end of the extensor retinaculum.

The graft was then sutured to the remainder retinaculum on its inferior aspect using vicryl 2-0. Adequate tension of the retinaculum over the tibialis anterior tendon was achieved as it was fixed medially onto the tibia using 3 mini anchors 2.0 mm (Figures 6-9) and reinforced over the tibia and medial malleolus with the remainder tissue. Complete passive range of motion without snapping or bowstringing of the extensor tendons was verified. Figure 6: Intraoperative picture of a mini anchor placed onto the medial malleolus in order to fix medially the fascia lata graft. Figure 7: Adequate tensioning of the graft is performed, adjusting the tension with the sutures attached to the mini anchors. Figure 8: Adequate tension is obtained after the repair. No entrapment of the tendons was observed with passive intraoperative ankle dorsiflexion and plantarflexion. Figure 9: Final intraoperative view of the repair. The fascia lata graft can be observed spanning the previous defect.

The immediately postoperative rehabilitation consisted in nonweight bearing gait using a controlled ankle motion (CAM) orthosis in neutral position. The patient was discharged from the hospital five days after surgery due to difficult pain management.

One month after surgery, she began physical therapy, focused on gaining dorsiflexion, and weight bearing was allowed. Two months after surgery, her active range of motion was 0º-100º without any pain. She used crutches for three months and the Cam Walker orthosis for 4 months.

At the fifth month she was pain free, had 50 degrees of plantar flexion and 20 degrees of dorsiflexion, and was performing all of her pre-injury daily activities, including light sports activities. At the sixth month she had an AOFAS score of 90 points due to mild, occasional pain related to the scar, and a Lower Extremity Functional Score[4] of 80 points. At 1.5 years of follow up, the patient presents with no pain with daily life activities, full range of motion and can jog lightly without any complain. When subjected to impact sports, or extensive physical activities she presents with some discomfort in the area of the repair.

She has not returned to impact sports in a routine fashion, and prefers to keep herself subjected to non-impact sports. At physical examination, there is no bowstringing or snapping over the reconstructed retinaculum (Figure 10). No other physical findings are found. Figure 10: Final follow up images. No bowstringing is noted.

Cadaveric studies have analyzed the anatomy of the inferior extensor retinaculum. The retinaculum is split into two layers in a Yshape manner, defining three compartments that contain tendons and their synovial sheaths: the extensor digitorum longus and peroneus tertius in the medial part; the extensor hallucis longus under both arms of the Y-shape portion; and the tibialis anterior tendon more medially under both arms of the Y [6]. Of the three cases reported, two involved the extensor digitorum longus tendon, and one involved the tibialis anterior tendon.

The fascia lata appears to be a reasonable graft to reconstruct the retinaculum, it is safe, easy to obtain and is sufficiently strong to allow light physical activities in the early postoperative period. In two of the three cases reported in the literature, the retinaculum was repaired. Only one of the three cases was reconstructed, and the reconstruction was done with fascia lata autograft also. They did not document follow up of the patient. Our patient had a good clinical result, with no pain, and was performing light sports activity at 1.5 years follow up, but still with some physical limitations. We will continue follow up on her, as associated inflammatory conditions may appear and provide a better understanding of this pathology. 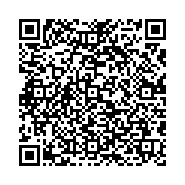