Copyright: © 2016 Velimishi V, et al. This is an open-access article distributed under the terms of the Creative Commons Attribution License, which permits unrestricted use, distribution, and reproduction in any medium, provided the original author and source are credited.

Introduction: Celiac disease, is an autoimmune disorder of the small intestine that occurs in genetically predisposed people. Symptoms include pain and discomfort in the digestive tract, chronic constipation and diarrhoea, failure to thrive, anaemia and fatigue, but these may be absent, and symptoms in other organ systems have been described.

Case Presentation: A two year old girl was admitted at our hospital in March 2013 with a diagnosis of Ascitis and Edema. She has a history of 6 months of being pale and tired. In the last 3 weeks she manifested a severe diarrhea and edema in both her feet. During physical examination the girl looked tired and reacted slowly. She had dry mouth and spare hair. Heart rate was normal but tones intensity was weak. Lungs auscultation was uneventful. Abdomen was very large, distended, liver was 3-4 cm under the costal border,spleen was not palpable. In the low extremities was evident bilateral edema. The child’s weight was 10 kg. IgA antitransglutaminasis was positive for celiac disease. Heart ultrasonography showed an effusive pericarditis which is not a common association with celiac disease.

Conclusion: CD should not be underestimated because sometimes may be complicated by rare but life threatening events like effusive pericarditis. Failing to react and take measures quickly can result in fatality. An association between celiac disease and pericardial effusion is not deescribed before. Every child with pericardial effusion without a clear etiology should be tested for celiac disease.

Celiac disease is caused by an autoimmune reaction to gliadin, a gluten protein found in wheat, barley and rye [1]. Upon exposure to gliadin, and specifically to three peptides found in prolamins, the enzyme tissue transglutaminase modifies the protein, and the immune system cross-reacts with the small-bowel tissue, causing an inflammatory reaction. That leads to a damage of the villi causing malabsorption as the main consequence. The only known effective treatment is a lifelong gluten-free diet. While the disease is caused by a reaction to wheat proteins, it is usually classified as different from the other forms of wheat allergy. Increasingly, diagnoses are being made in persons without symptoms as a result of increased screening [2]. Globally celiac disease affects between 1 in 100 people [3].

Our patient is a two- year- old girl admitted to our hospital in March 2013 with a diagnosis of Ascitis and Edema. She has a story of six months of being pale and tired. In the last three weeks she presented a severe diarrhea and edema of low extremities. Family history was uneventful. She was the only child with a story of normal pregnancy and normal delivery. She was breastfed for first six months. According to her parents she was grown normally until at the age of 12 months. On physical examination the general condition of the child was catastrophic. She looked tired and reacted slowly. She had dry mouth and spare hair. Heart rate was 108/min. Her pulses were rhythmic but heart tones were weak. Lung auscultation was uneventful. Abdomen was very large, distended. Liver was 3-4 cm under the costal border,spleen was not palpable. In the low extremities is evident bilateral edema (Figures 1 and 2). Child weight was 10 kg. According to her parents she loosed 2 kilograms in 2 months. An eyelid edema was appeared in recent days along with an erythematic area on his face and ears accompanied by a intensive pruritus. Blood count showed: WBC = 9.4 × 103/mm3; RBC = 4.3 × 106/mm3; Hb = 10.4 g/dl; Platelets = 446 × 103/mm3. Biochemical Examinations: glucose =76 mg/dl; urea = 34 mg/dl; Creatinine = 0.7 mg/dl; SGP = 117 U/l; SGOT = 92 U/l; Total bilirubine = 0.3 mg/dl; Total Protein 3.8 g/dl (n > 6); Albumin = 1.9 g/dl; Sodium = 124 mmol/L (n > 136); Chloride = 92.1 mmol/L; Abdominal sonography showed a liver DL- 13 cm, homogeneous with hyperechogenicity, bile ducts were normal. Spleen and kidneys were without any visible change. A considerable ascitis was evident. Heart sonography showed normal structures. It is observed a pericardial effusion (Figures 3 and 4). Chest X ray was normal without pleural effusion but is noted cardiac enlargement (Figure 3). Manthoux reaction was negative. Blood culture and viruses serology were also negative. Knowing the history of prolonged diarrhea, edema,ascitis and the most interesting finding pericardial effusion we tested celiac panel which show: Transglutaminases IgA = 175.6 U/ml; Transglutaminases IgG = 56.7 U/ml. According to last ESPGHAN criteria of celiac disease diagnosis we didn`t perform upper endoscopy because the clinical signs of celiac disease were evident and the level of anti transglutaminasis were 10 times more than upper normal limit. We started enteral nutrition, albumin infusions associated by iv furasemide. We have regulated electrolytic balance. After ten days of treatment our girl showed a tremendous amelioration. She was more active and heart sonography showed an important reduction of pericardial effusion. She was discharged in gluten free diet. After six months (Figure 2) she has recuperated her weight and the level of transglutaminasis was slightly upper the normal limit. Heart sonography showed normal cardiac structures. 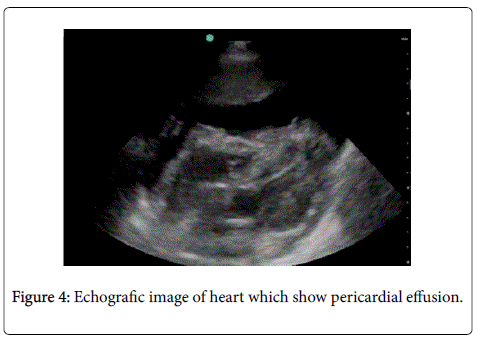 Severe celiac disease leads to the characteristic symptoms of pale, loose, and greasy stool and weight loss or failure to gain weight. People with mild form of celiac disease may have symptoms that are much more subtle and occur in organs other than the bowel itself. It is also possible to have celiac disease without any symptoms whatsoever. Many adults with subtle disease only have fatigue or anaemia [4]. The diarrhea that is characteristic of celiac disease is pale, voluminous, and abnormally malodorous. Abdominal pain and cramping, bloatedness with abdominal distension, and mouth ulcers [5] may be present. Celiac disease leads to an increased risk of both adenocarcinoma and lymphoma of the small bowel [6]. This risk is also higher in first-degree relatives such as siblings, parents, and children. Whether or not a gluten-free diet brings this risk back to baseline is not clear [7]. Longstanding and untreated disease may lead to other complications, such as ulcerative jejunitis and stricturing [8]. Celiac disease has been linked with a number of conditions. In many cases, it is unclear whether the gluten-induced bowel disease is a causative factor or whether these conditions share a common predisposition. Coeliac disease is associated with a number of other medical conditions, many of which are autoimmune disorders: diabetes mellitus type 1, hypothyroidism, primary biliary cirrhosis, and microscopic colitis [9]. Pericardial effusion is not prescribed as an association of celiac disease before. We have reviewed a lot of articles on line about etiology of pericardial effusion in children. Pericardial effusion is associated with a various underlying etiologies [10,11]. In a large study with 116 children diagnosed with pericardial effusion forty-five patients (39%) had an underlying neoplastic disorder; 10 patients (9%) had associated collagen vascular disease; and 9 patients (8%) had an underlying diagnosis of renal disease. Four patients (3%) had bacterial infections: one had Haemophilus influenzae pericarditis; one had Staphylococcus aureus pericarditis; and two each had Neisseria meningitidis bacteremia. Two patients (2%) were infected with human immunodeficiency virus (HIV), and three patients (3%) had other diagnoses (one each with hypothyroidism, viral sepsis, and anorexia). Forty-three patients (37%) had no identified etiology and were designated as having idiopathic disease. Pericardial effusions were rarely bacterial (3%) but were often associated with neoplastic disorders (39%) or were idiopathic (37%) in nature; none were associated with rheumatic fever. However, these results are consistent with studies reporting neoplasia in 33% [12] to 58% [13] of adult patients with large pericardial effusions. The proportion of patients with idiopathic effusions in this cohort is consistent with previous reports [14,15]. In our case we did not find an etiological factor of pericardial effusion, so the most propable cause was idiopathic effusion. Knowing that celiac disease was confirmed, we cast the doubt about an association between celiac disease and pericardial effusion.