Copyright: ©2015 Thoma E, et al. This is an open-access article distributed under the terms of the Creative Commons Attribution License, which permits unrestricted use, distribution, and reproduction in any medium, provided the original author and source are credited.

Introduction: The use of alcohol is already a phenomenon of many societies. It is estimated that the total number of the population classified as alcohol consumers in the world goes up to 2 billion, while 76.3 million people develop alcohol use disorder

Aim: The aim of this study is to find out the correlation between the time of alcohol abuse and changes of different variables in complete blood count.

Methods: This is a retrospective study, which included328 patients, hospitalized at two centers for treatment of alcohol use disorders at UHC “Mother Teresa”.

Results: 100 % of the patients of this study were male, due to the fact that AUD is mostly a male problem, but also because of the stigma that exists for women. The mean age of the patients was 42.9 ±10.8 years old (22-81 years old). The results of the study showed that WBC, RBC, Hgb, HCT had a poor negative correlation, but were significantly important with the time of alcohol consumption (p<0.01). Meanwhile, MCV, MCH, had a poor positive correlation with the time of alcohol consumption (respectively p=0.02 and p=0.03).

Conclusion: The time of problematic alcohol consumption is correlated with the changes of some variables of complete blood count.

The use of alcoholic beverages dates from the beginning of civilization in ancient Egypt. As far as we know the first alcoholic drink was used at least in 6000 BC and people have been drinking alcohol all over the world ever since [1].

The use of alcohol is already a phenomenon of many societies. It is estimated that the total number of the population classified as alcohol consumers in the world goes up to 2 billion, while 76.3 million people develop alcohol use disorder [2,3]. The effects of alcohol depend on the amount of ethanol consumed per kg body weight. Levels from 0:02 to 0:03 g / dl are achieved after consumption of one or two standard drinks [4]. Complete blood count is one of the most requested blood test from physicians. Alcohol is the most commonly used drug, whose consequences include changes of CBC [5]. Due to the fact, that alcohol use, especially in heavy drinkers, can cause different metabolic derangements, it is necessary, to investigate the changes of complete blood count [5]. Another reason that makes CBC necessary to use, is to reveal several damages that alcohol can cause, for example to reveal liver damage [5]. Alcohol consuming can cause different adverse effects on blood cells, therefore even in their functions. The main causes leading to changes of CBC (complete blood count) are: myelosuppression that is accompanying with slight reduction in all blood cells, blood loss from gastrointestinal tract, malnutrition etc [6].

This is a retrospective cohort study with homogeneity, which was conducted during the period of January 2012- January 2013 in two clinics which treat alcohol use disorders: Center of Addict logy and Clinical Toxicology and the Center of Alcohol Dependence at UHC “Mother Teresa”. The data were collected from clinical records of patients admitted over this period in these clinics (Table 1).

The study included 328 patients admitted to these clinics with the diagnosis “alcohol withdrawal syndrome”. Patients included in the study were > 22 years old and underwent treatment in these services for more than 24 hours. The category of patients excluded from the study were <22 years old, hospitalized for less than 24 hours or the patients diagnosed with “alcoholic coma” who were initially hospitalized in the Intensive Care Service.

Table 2: Descriptive data of these variables.

• age (age of the patient at admission) (Figure 1) 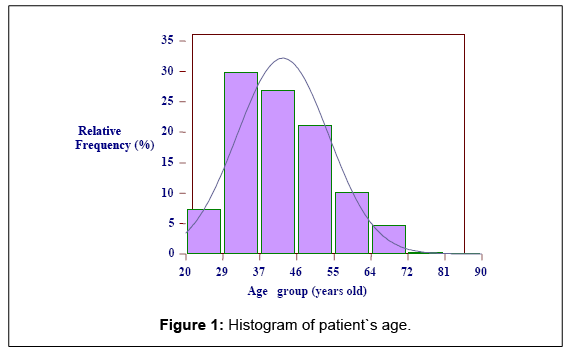 • MCH- mean cell hemoglobin-average amount of Hb in the cell

All the tests were carried out at the Laboratory Service of University Hospital Center “Mother Teresa”, as well as at the private Laboratory “Elite” (Figure 3). 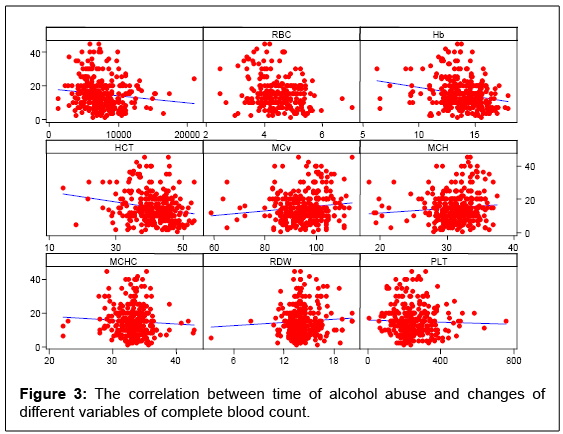 Figure 3: The correlation between time of alcohol abuse and changes of different variables of complete blood count.

The age of the patients

Age is not subject of normal distribution KS=0.009

Table 3: Statistical summary of the patients.

As we can see from the Graph 3 the obvious results are as follows:

Alcohol abuse is a common phenomenon in Albania, especially among men. Till the `00, alcohol abuse among female was very uncommon, but nowdays it is becoming a problem even for female, especially young.

In Albania it was never performed such a study, so till now we didn`t know how alcohol abuse affected blood cells in alcohol abusers.

Since, complete blood count is readily available laboratory test, and alcohol affects blood cells, it is very helpful to use this test to better determine and to evaluate problems caused from alcohol abuse. Another reason, why is very useful to use this test to determine problems that comes from alcohol abuse, is the fact that here in Albania we do not have the equipment and techniques to evaluate modern biomarkes of chronic alcohol abuse like EtG, CDT, EtS,FAEE, acetaldehid,salsolinol etc, we should use every “small” trace to detect in time the problems that comes from alcohol.

Changes of RBC from chronic and heavy drinking have been studied in many respects, not only regarding to changes of the size of RBC(macrocytosis), but even the presence of defectuose RBC in the blood and their production from the bone marrow [5]. As a result of these changes, anemia is a common finding in alcoholics [5].

Anemia was found in approximately 50% of the alcohol abusers in a study performed in Finland [7]. The same study revealed that elevated MCV and MCH was a common finding among alcohol abusers both in absence, or in presence of anemia [7]. Consuming of beer, which contains folate, reduces the risk of anemia, but consuming the alcoholic beverages that lack folate, increasis the risk [8]. In this study, there is weak negativ, but insignificant correlation between the duration of alcohol abuse and red cell distribution width(RDW), (Figure 3) but increased RDW and other dismorphisms are common findings after long time of alcohol abuse and can be used as a marker of alcohol misuese [9]

As the time of alcohol consumption increases, so the amount of alcohol that a person consumes is increased, WBC is decreased, and this correlation is significant (p,0.01). This means that alcohol abusers are at high risk to develop various deseases, including infections, [10] or cancer [11-14]. Even though the exact mechanism how alcohol is related to cancer it is not yet well established [11-14]. In this study it was not observed any statistically significant relation between time of alcohol consumption, although they have negative correlation. The reduction of PLT, or exactly the negative correlation between platelet count and duration of alcoholism it was observed too in a prospective case-control study performed in Kebbi State in Nigeria [15].

In another case-control study performed too in Nigeria, which included one hundred and twenty adults (≥ 18 years old), they are observed many heamtological complication from the duration of alcohol abuse. They oberved significant reduction of WBC, RBC, haemoglobin, haematocrit and platelet count, while MCV values are significantly eleveted [6,16].

In a study performed in India, it was find out a significant reduction of haemoglobin, RBC, WBC, haematocrit and PLT, while MCV and MCH were significantly eleveted [17]. Anemia, leucopenia and thrombocytopenia are common abnormalities that are associated with alcohol abuse with respect to time of alcohol abuse and the quantity of alcohol consumed. [6,7,15-17] These findings suggest that alcohol abuse can cause bone marrow suppression, or ethanol has cytotoxic effects. Liver damage seconadry to alcohol abuse also impacts red blood cells and the haeostatic mechanisms [18]. Some of other studies that deal with haematological changes from alcohol abuse are shown in the Table 5.

Table 5: Studies of some authors concerning changes of variables of complete blood count and time of alcohol consumption.

The time of problematic alcohol use affects changes in some variables of complete blood count, thus leading to problems that may follow these changes [19-21]. Since here in Albania, we lack the modern techniques to detect biomarkers of alcohol abuse, which are more sensitive and specific, it is necessary for us to focus even on these changes to detect in time problems caused from alcohol abuse. In this study hundred percent of the patient are male, mostly due to stigma that exist for female to present for medical help for such problems, but even for the fact that alcohol is become a female problem recently [22- 25]. So, we didn`t have the chance to study the differences that may be seen between male and female, which remains to be studied later.